Porsche engineers have been using the freezing climates of the Arctic Circle to test the cold-weather range of the brand's first all-electric model, the Mission E.

Photographed being towed and charged by a Cayenne, presumably because it ran out of energy during a longevity test, the four-door electric sports car is being developed to offer a 310-mile range.

Logistics and production boss Albrecht Reimold revealed late last year that several variants of the model are due, each offering differing levels of performance to increase its market reach.

Reimold announced his confidence in the Mission E's success amid strong sales for the Panamera E-Hybrid, which accounts for 60% of overall Panamera sales worldwide. In Scandinavia, the electrified variant represents up to 90% of Panamera sales, emphasising the changing demand, particularly in regions where governmental incentives have been introduced. 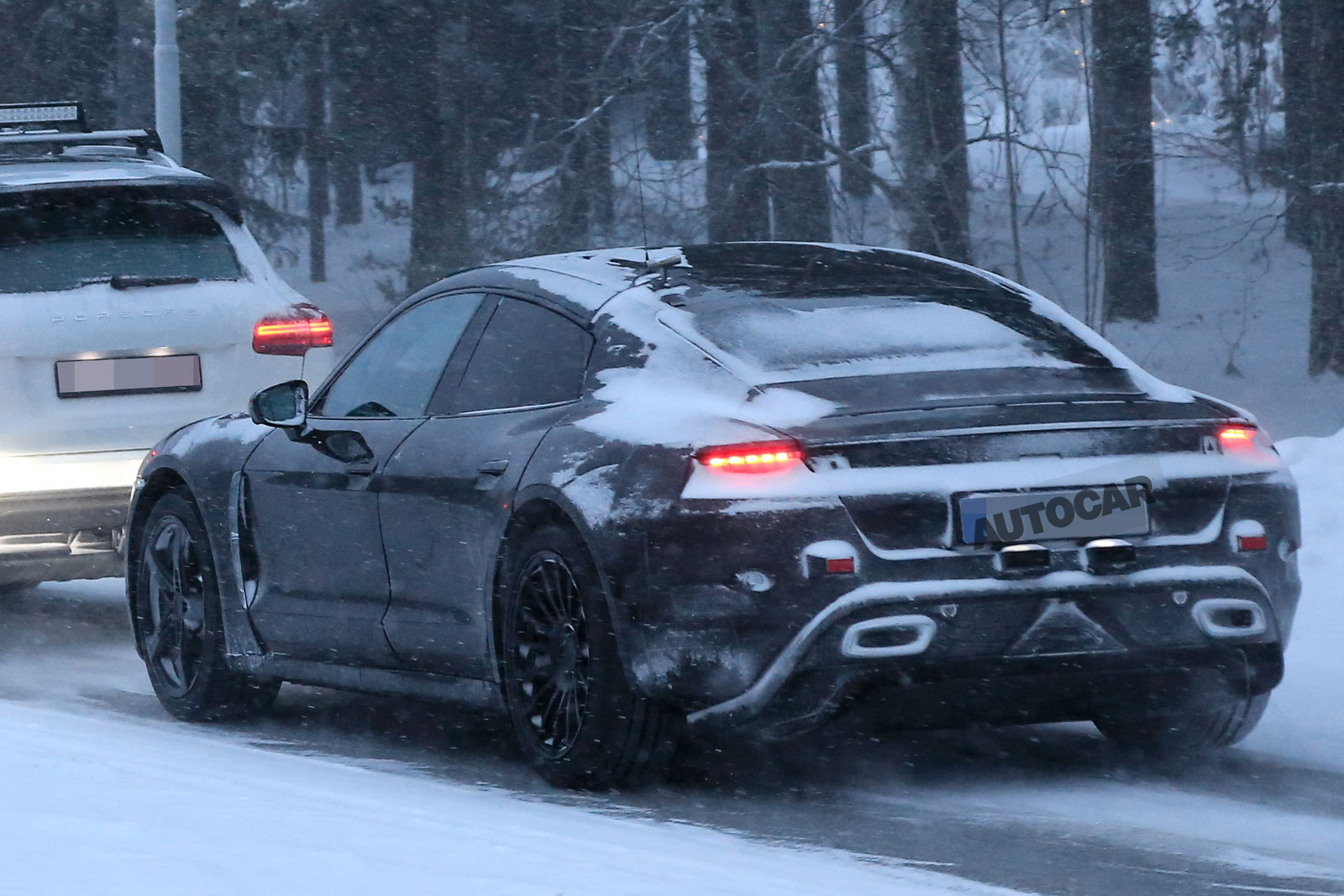 The car, codenamed J1, was closely previewed as the Mission E concept at the 2015 Frankfurt motor show. It will be Porsche’s first bespoke electric car and the start of a fifth model line.

Although many other car makers are choosing SUVs as their first electric cars for packaging reasons, Porsche has opted for a more low-slung model to show that its electric technology is as much about performance as it is about reducing emissions.

Porsche R&D boss Michael Steiner confirmed that design work on the model is now complete and very close to the well-received concept. Development cars have completed testing and Porsche has been testing full-body prototype versions of the production car for several months. 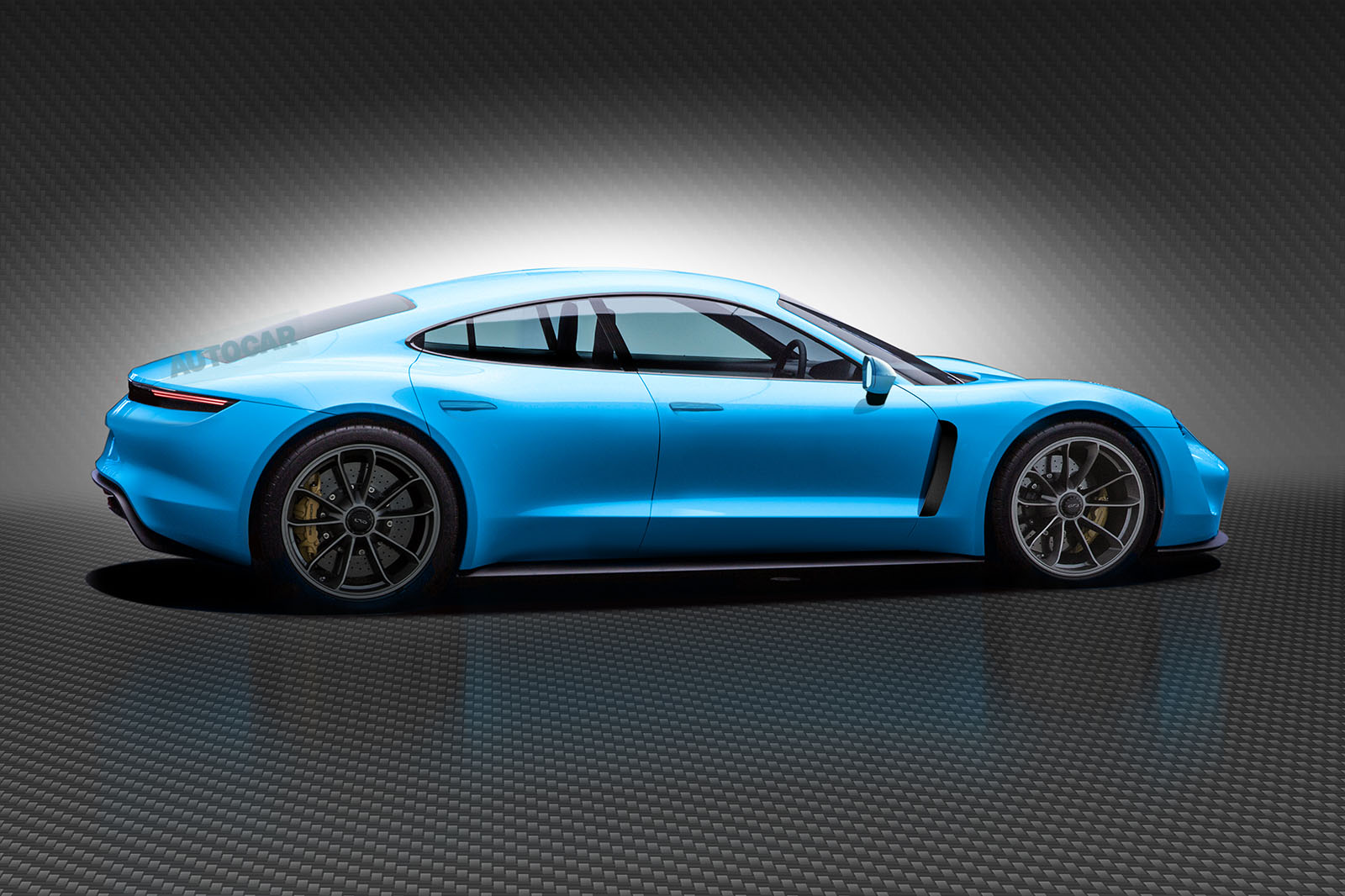 The Mission E has yet to be given an official name for production, but it will not take the name of the concept, according to Porsche boss Oliver Blume. It is pitched as halfway between a 911 and a Panamera in concept. Indeed, Porsche insiders refer to it as a “four-door sports car”, with Porsche keen to use electric technology on a completely new type of model to bring the brand to more people.

Steiner said the brief is “a really sporty sports car, a four-seater that’s low on the road, with a low centre of gravity. A car that’s typically Porsche, but electric”.

The Mission E is Porsche's first step towards electrifying its entire range as part of a Volkswagen Group target of having an electrified version of every model by 2030.

Porsche has no plans to create an electric version of the 911. The only way to store enough batteries for a viable range would be in the floor, and that would mean raising the vehicle, rendering it no longer a sports car in the company’s eyes. 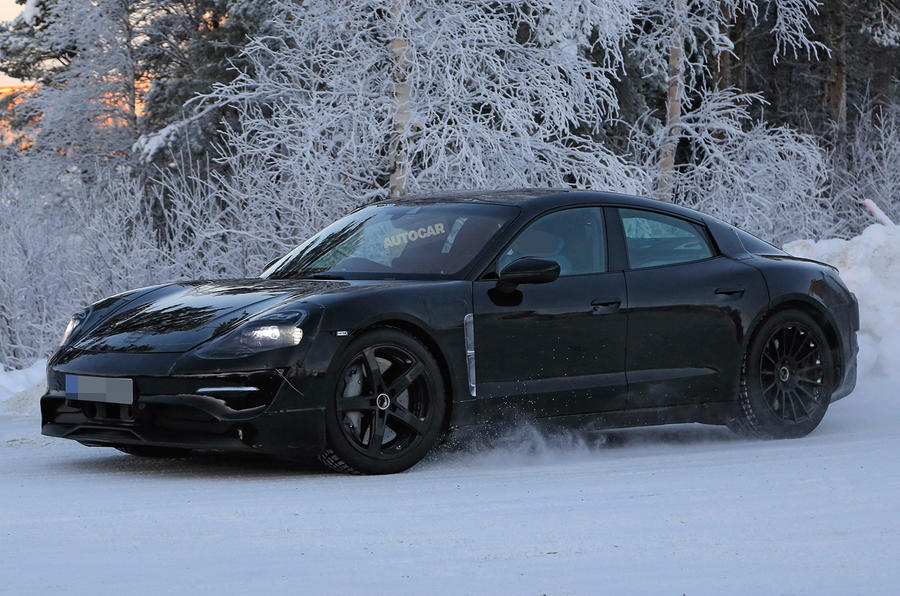 However, the next-generation 911, targeted for launch in 2019, is being developed with the availability of plug-in hybrid technology. That said, Porsche has yet to decide when to offer a plug-in hybrid 911 to market, if at all. Even if it does, the Mission E’s launch is likely to come first.

Steiner said the more an electric car has to perform as a sports car, the more weight comes into the equation. “The Mission E is the sweet spot of sports car performance that, size-wise, provides enough space for significant battery packages,” he said.

The J1’s architecture is a bespoke Porsche development and differs from other electric platforms being engineered within the VW Group. Audi is developing an architecture called C-BEV to be used first on its E-tron SUV next year. The J1 has its batteries much lower in the floor, while the C-BEV is better-suited to higher-riding SUVs. The two architectures use common lithium ion battery technology, though.

The J1 architecture is also set to underpin Bentley’s first electric model at the turn of the decade, using the Speed 6e concept as inspiration in style, if not in size. The Speed 6e is a shorter, two-door sports car.

As a four-door and dedicated electric car with no requirements for a combustion-engine version, the Mission E doesn’t suffer from any of the packaging problems that Porsche would get from converting an existing model to be purely electric-powered. The concept car used two electric motors – one on each axle – to produce a combined 600bhp and 663lb ft, drawing their power from lithium ion batteries mounted in the floor. The concept car was all-wheel drive, with the front wheels driven mainly to aid the acceleration and the handling remaining rear-biased, with torque vectoring controlling individual wheels. 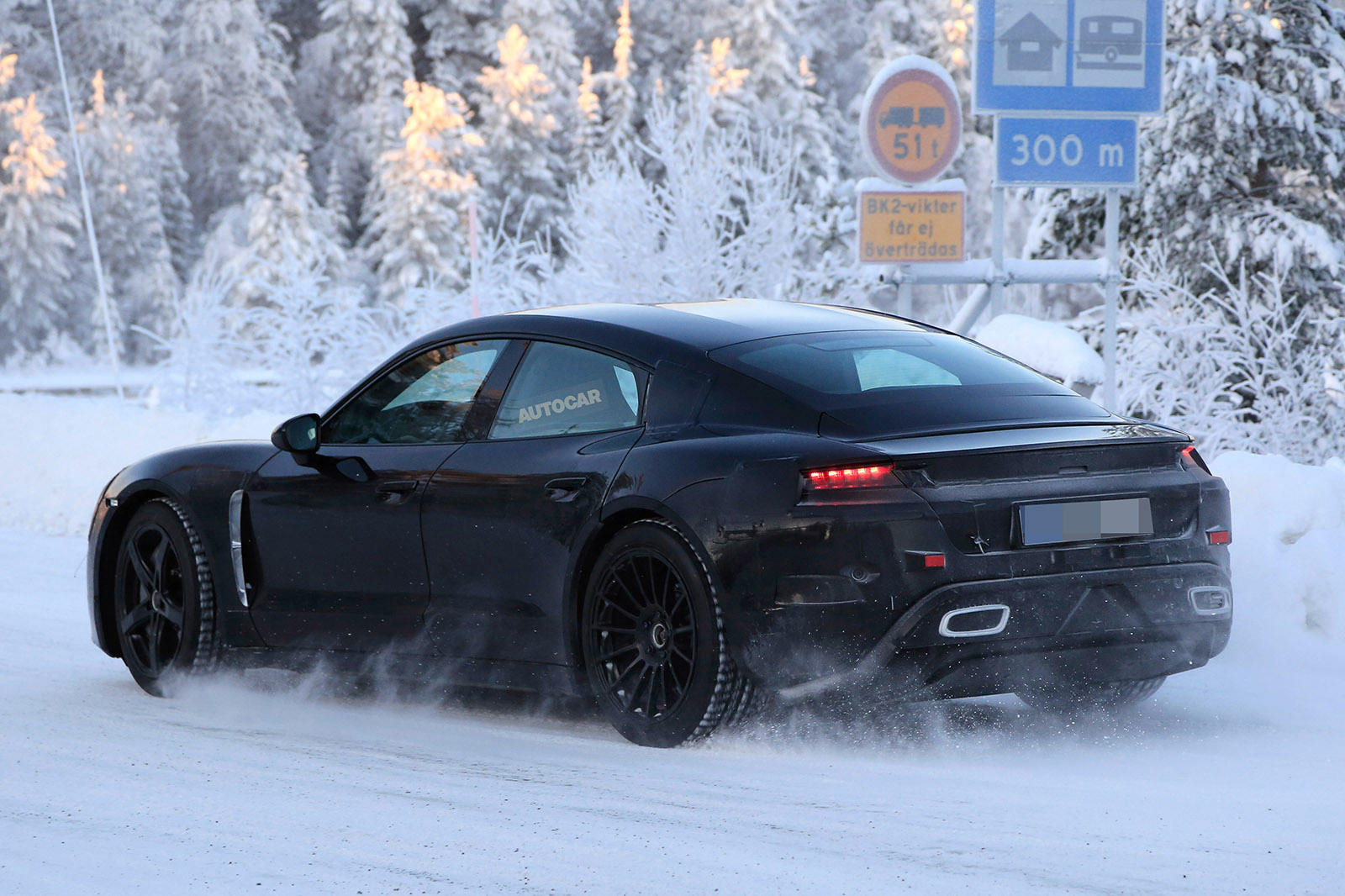 The 0-62mph time was quoted at 3.5sec and 0-124mph at less than 12.0sec, despite the concept’s kerb weight of more than 2000kg. Porsche’s electric tech is being developed in-house due to the specific need for an electric Porsche to focus on performance above all else.

Its Zuffenhausen engineering centre is being expanded to support the new model and Porsche plans to sell around 20,000 Mission Es a year when production is ramped up.

The firm will offer the Mission E with a range of power outputs and chassis set-ups. “We will offer different levels of performance,” said Blume. “There will be sporty, high-performance versions and a lower-powered one.”

Porsche plans to equip it with state-of-the-art electronics that permit over-the-air updates to key systems such as the driveline and autonomous driving functions. This means power outputs could be increased remotely.

The car will also be fitted with an 800V rapid-charging system, which will recharge 80% of the battery in just 15 minutes. Porsche is understood to be working with Hitachi on the technology and is already trialling it with the fitment of two 800V DC fast-chargers at recently opened offices in Berlin.

Porsche will not look to give the Mission E an overly excessive range, because the recharging time is so favourable. As long as the Mission E hits its 500km (310 miles) target, that will be sufficient, Steiner said.

Adding more range means more battery packs, which increases the weight. Steiner said a slight loss in range would be compensated by faster charging times and Porsche is working with customers to decide exactly what the optimum range should be.

“For people who don’t need a big daily driving range but do need an occasional longer range, how much is the cost of sacrificing some range for charging time?” said Steiner.

Further ahead, Porsche is investigating the use of solid-state batteries, which are lighter and more compact than lithium ion cells, as a possible future technology for an all-electric sports car, but production versions are several years away. It has tested the tech in a prototype Boxster, which handled well, but the weight impacted its lap time. 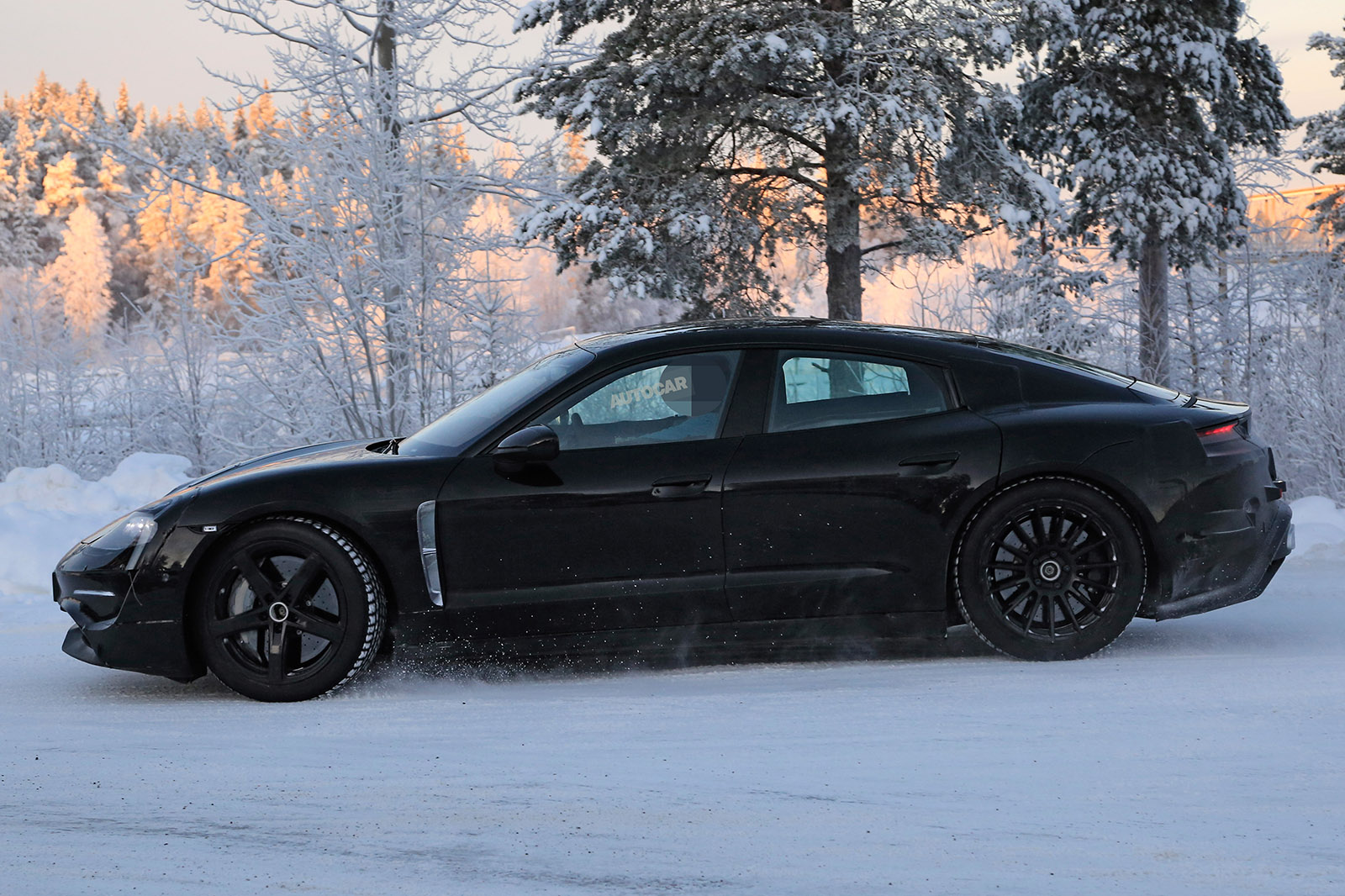 On the Mission E's styling, Porsche design boss Michael Mauer has described the production version as “a beautiful car”. Speaking more generally about electric cars, he said they gave designers “lots of possibilities”. Mauer added: “So far, electric components are still pretty big. You get rid of the metal block of the engine but have to package batteries. Replace one with another. In the end, there will be more freedom for designers as the huge metal block disappears and batteries get smaller.”

Porsche’s next electric car after the Mission E is set to be an SUV – a car Steiner said will have “benefits for Porsche", "because there’s still a trend for SUVs”.

Steiner added: “We made a clear strategy on electric cars to start with cars very close to the core of the brand. We will have a really sporty car between 911 and Panamera. It’s very well known that the SUV segment is growing faster but we didn’t want a ‘me too’ concept but a true Porsche concept.”

The Mission E is a catalyst for all future electrified Porsches, commanding €1 billion (£882 million) worth of investment into the company's research and facilities. The impact of this will help Porsche achieve its wider sustainability plans, which Reimold said includes achieving "CO2-neutral production". The expansion plans Mission E has encouraged will create 1200 new jobs at Porsche.

Errrrrr where is the Porsche supercharger network ?

I see no plans for a porsche charger network apart from their 2 fast chargers in Berlin.

Tesla have done it properly, not only long range electric cars, but also a massive network of fast chargers - one without the other make any sort of trip a major hassle.

Disappointing if mules are an indicator

Looks like to me as if the bean counters beat out the design team......if the test mules are any indicator.  I put money down when I saw the design study and watched all the Porsches PR on the E.  Unfortunately this does not appear to be a 'next generation' Porsche.....rather, just a 'car'.  Hope I am wrong.

With every model? With a big spare charger on board! Batteries really run down quick at -40C,they wouldn’t get close to 500 km highway range at 120kph.Useless for Northeners, anyone north of 55N latitude,nevermind us at 62N!