It is fair to say that there was considerable debate as to whether to call Ford’s first full EV a Mustang.

Actually, I understand there was something closer to a massive punch up over the issue, figuratively if not literally speaking. And you can see why: here is a high and heavy five door electric SUV. And they choose this as the first Mustang to depart from Electric the two door sports coupe script in the 55 year history of the original pony car.

The calculation is clear: while the ‘proper’ Mustang continues in the production it is Ford’s estimate that the number of additional EV early adopters who will be seduced by the name will be greater than the number of die-hard traditionalists who’ll spit their coffee over their cornflakes while reading this and vow never to buy another Ford again.

So what can I tell you after a very short ride in its passenger seat? In the way of such things, nothing like as much as I would wish. But some things are clear, nevertheless. The car feels like a real departure for Ford, and not just because it lacks an internal combustion engine. It has a sense of genuine quality and clearly quite enormous efforts have been made creating a state of the art interior, especially so far as the massive and rather Tesla-like central infotainment screen is concerned. It works really well. 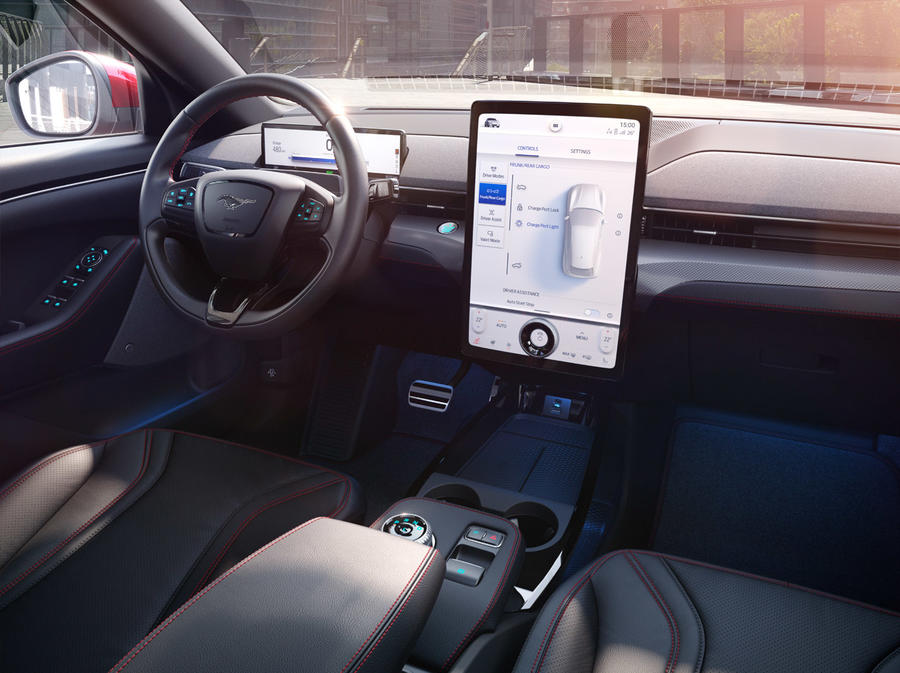 The car is exceptionally spacious too: four six footers could easily go on holiday together, there’s a decent boot and a quite brilliant ‘frunk’ (front trunk) lined in hard plastic with drain holes. The idea is you can fill it with ice and beer, transport anything from raw fish to hot curry without the smell reaching the cabin and, of course, dump the kids’ filthy games gear and then just hose it out afterwards.

There’s a standard and long range battery, rear or four wheel drive and choice of 254 or 332bhp power outputs, and that’s before the 465bhp ‘GT’ version comes along some time after sales begin in around a year’s time. Prices will range from somewhere around £40,000 to £65,000 for a fully loaded ‘First Edition’. The GT will cost over £70k. With the big battery its WLTP range is up to an impressive 370 miles.

There are three drive modes, ‘whisper, the default ‘engage’ and ‘unbridled’ (because this is a pony car, geddit?). In the last of these a rather unconvincing cod-V8 rumble is played through the speakers though, to be fair, you can turn it off. 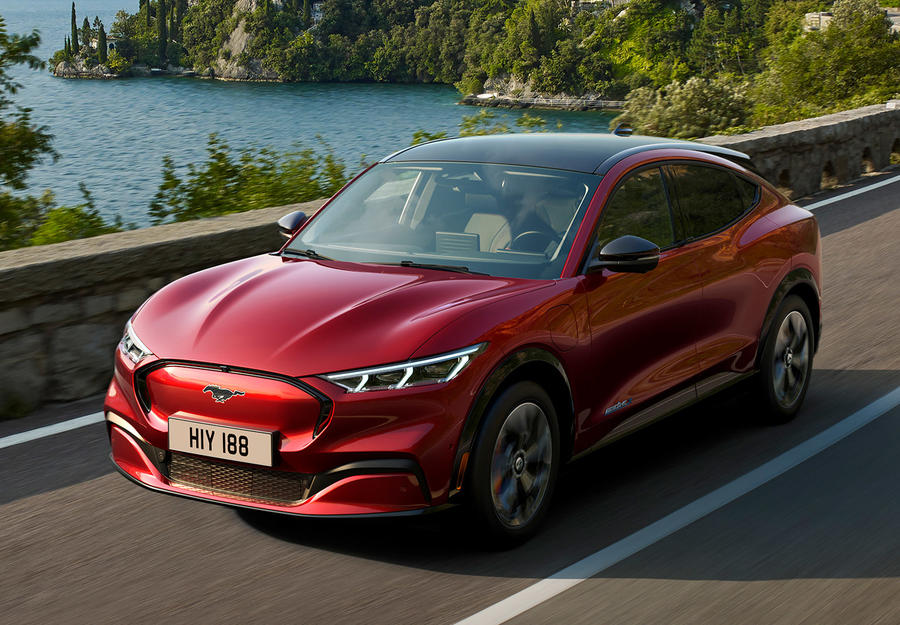 From the passenger seat, the First Edition model I travelled in felt quick enough to make me wonder whether I’d even want the GT. Ford says it’s mid 5secs to 60mph which feels about right. The GT is mid threes. It seemed composed through a slalom course for a two tonne SUV – thank the ultra-low centre of gravity for that and on entirely untaxing Los Angeles boulevards, rode plausibly well.

But none of that even starts to answer the fundamental question. There’s nothing I saw or experienced to suggest Ford has built anything other than a very capable and likeable electric SUV, but nor was there also anything to suggest it is in any way a credible addition to the Mustang stable – pun entirely intended. I’m not saying it’s not, only that to even begin to make that judgement will require not a short ride but a long drive. And for that I’m afraid is going to be many months from now.

Can you imagine the uproar if Porsche had stuck a 911 badge on the back of the Cayenne?

This is exactly what Ford has done.   They are wilfully abusing their own heritage.  I don’t have any issue with them using Mustsng styling cues, in fact I think it looks quite nice (on the outside, at least), they should just have given it a different name.

why have they called this car Mustang?  The Mustang was traditionally a 2 door sports car with a V8 engine.  This is a 5 door hatchback and, frankly, looks like a Jag F Pace.  Would it have been so difficult to come up with a new name?

and that ipad on the central console?  Wow.  I thought it was just Tesla that made truly hideous interiors, but it seems Ford have decided to join them.  Certainly won’t be on my shopping list when we eventually decide to look for a new car.

Why? I guess, like the Mini and 500, they want to expand the brand, whether it will work or not is anyone's guess.
I have no issue with them using the Mustang name and styling cues to enhance their new creation, why not, Porsche used 911 styling cues if not it's name for most of their range.

I think styling wise it works, you can see the Mustang influence in it, not sure about the touch screen as it looks a bit of an afterthought but otherwise the interior looks good to me.

Can anyone please explain why this (like the Jag I-Pace) is being called an SUV?

Utility? With a 400l boot? Not vewry utility.

Vehicle? Fair enough, it is a vehicle.

Can anyone please explain why this (like the Jag I-Pace) is being called an SUV?

Utility? With a 400l boot? Not vewry utility.

Vehicle? Fair enough, it is a vehicle.

Because no one wants largish 5 door hatchbacks anymore, so call them something else.

Would it get as much attention had they called it the 'new' Fusion or Mondeo?