BACK TO ALL NEWS
Currently reading: New Mercedes EQS packs S-Class tech, is most aero-efficient car
UP NEXT
EV start-up Aehra to launch “ultra-premium” SUV and saloons

The new Mercedes-Benz EQS will be the world’s most aerodynamically efficient road car yet, according to its maker.

In an announcement ahead of the electric-powered luxury saloon’s planned unveiling on 15 April, Mercedes-Benz said the fourth model from its EQ sub-brand will boast a drag co-efficient “starting at 0.20”.

The benchmark figure, measured in Mercedes-Benz’s state-of-the-art wind tunnel in Sindelfingen, Germany, places the new headlining EQ model ahead of its both its electric-powered and combustion-engine saloon car rivals for outright aerodynamic efficiency.

It also establishes the EQS as the most aerodynamically efficient Mercedes-Benz road car yet ahead of the A-Class saloon and seventh-generation S-Class, both rated at 0.22.

The 0.20 figure was achieved in combination with 19in AMG wheels and with the Sport driving mode, says Mercedes-Benz.

The EQS is the first model to be based on Mercedes-Benz’s EVA platform, which is also planned to underpin the upcoming EQE saloon, EQE SUV and EQS SUV, among other upcoming models. 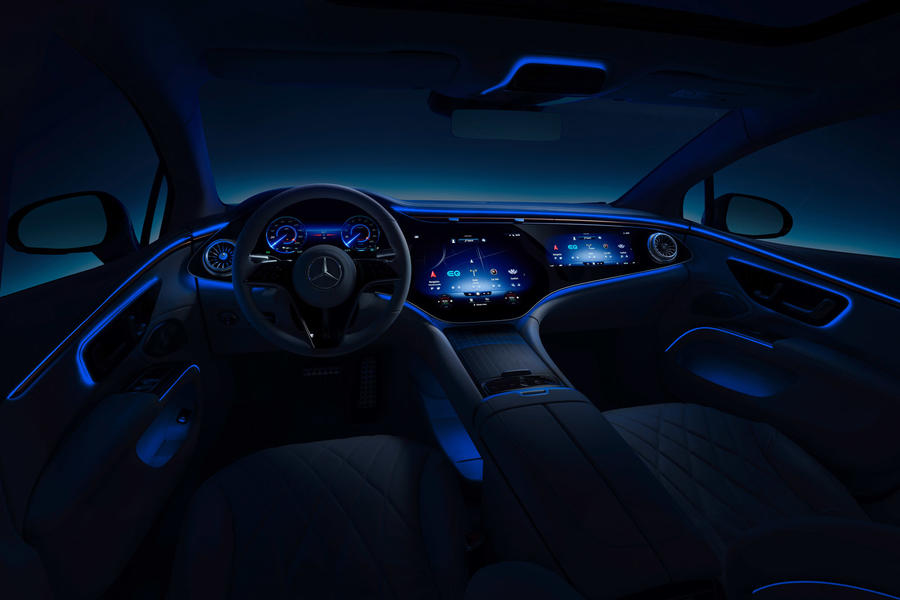 The new platform uses a skateboard-style architecture that has allowed Mercedes-Benz to provide the upmarket saloon with its own distinctive cab-forward proportions, with the A-pillars set well forward, a shorter bonnet and boot than the latest S-Class and a heavily curved roofline – the so-called 'one bow' design lineage as Mercedes-Benz describes it – to give it a coupé-like profile with short overhangs.

The front corners are also heavily tapered to reduce the frontal area, while the cooling ducts have air shutters that open and close, depending on the cooling requirements of the electric driveline and brakes.

The large bonnet of the new 5m-plus saloon wraps around into the flanks, placing its shutlines in a more efficient position for lower drag and less turbulence than the more conventional bonnet of the S-Class. 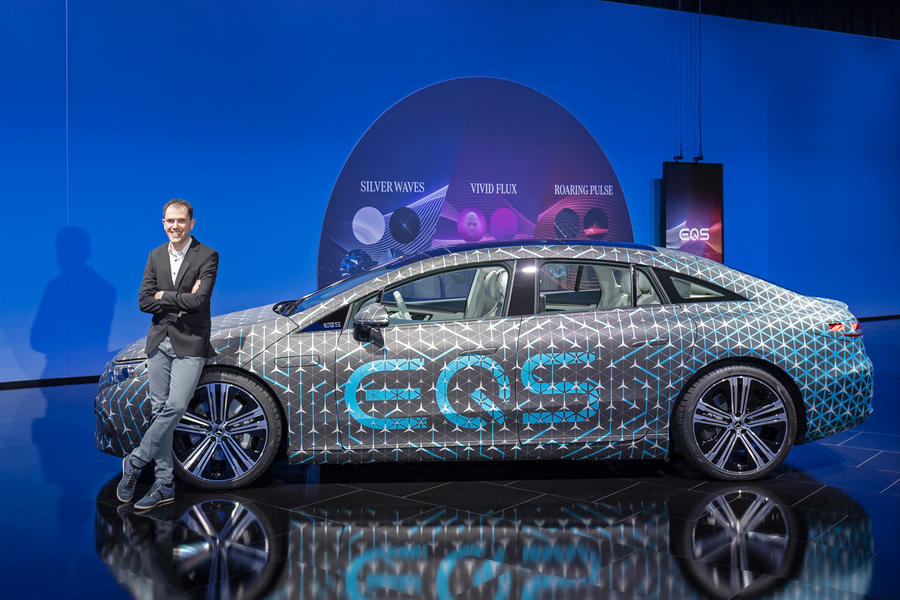 The filler for the windscreen washer bottle is integrated into a narrow flap, which hinges outwards from behind the front left-hand wheel arch

Further back, the doors are frameless and feature flush-fitting handles similar to those available as an option on the latest S-Class. The complex 10-window glasshouse stretches well back above the rear wheel arches, while the roof features a two-piece sunroof as standard.

Departing from the S-Class, the EQS also receives a large fastback-style tailgate that hinges from above the top of the rear screen – a layout also set to be adopted by the smaller EQE, due to be revealed at the Munich motor show in September.

A full width tail-light similar to that seen on the EQC and recently introduced EQA is incorporated into the tailgate.

Inside, the EQS adopts its own unique dashboard, controls and trim elements. Ahead of the driver is a steering wheel similar in style to that used by the S-Class, with capacitive touch pads on the two upper spokes. A high-set centre console runs through the middle of the front cabin, underneath which are sizeable oddment stowage bins. Customers will be able to specify the new EQ model with Mercedes-Benz’s digital MBUX Hyperscreen. Consisting of three separate displays integrated behind a single curved panel 141cm wide, it is controlled by the latest version of the MBUX operating system, whose eight-core CPU features 24GB of RAM and supports over-the-air software updates.

Other options include a head-up display unit featuring augmented reality functions, a Burmester surround sound system with 15 speakers and output of 710W and a high-efficiency particulate filter as part of a so-called Energising Air Control system.

The cab-forward proportions and flat floor are claimed to liberate greater accommodation than that of the S-Class, with an AMG trim line offering sporting touches, including more supportive front seats. The standard rear seat is designed for three-across seating, although the centre seat is raised and the glasshouse tapers inwards.

The EQS will be offered with a comprehensive sound package with four different modes: Silent, Silver Waves, Vivid Flux and Roaring Pulse – the last of which has been conceived to replicate the sound of a traditional combustion engine.

It's great having a low drag body shape, but how heavy is this car? Weight directly impacts on rolling resistance which from an efficiency standpoint is arguably a more important than low drag. Mercedes really should be shouting about getting the weight down, then I'd be more impressed.Quite apart from which, what happens when there is a slight crosswind? Aerodynamic stability, and performance when the wind direction is off axis is probably more important than achieving the lowest possible Cd measured in a wind tunnel.

Quite apart from which, what happens when there is a slight crosswind? Aerodynamic stability, and performance when the wind direction is off axis is probably more important than achieving the lowest possible Cd measured in a wind tunnel.

I remember when the Ford SIerra first came out and the jelly mould shape (like this Merc) had to be refined with 'strakes' either side of the rear window to get over instability problems. Maybe the modern solution is via the electronics of the ESP?

If the range is competitive to the Model S and Lucid Air and can hit 0-to-62 in under or about 4 seconds, I believe Mercedes may have a hit on their hands and a real contender! If it lives up to expectations, coukd this be the reason that Jaguar felt their new XJ was not up to snuff, as they learned more about the EQS? I just adds to my belief that other models that are currently on in the EQ line up, are place holders until Mercedes could bring true BEV platform to market under the EQS. IMHO, though, this is the vehicle Mercedes should have put their Maybach badge on and sold against the likes of the Ghost and Flying Spur. Then from there, letting the tech trinkle down to EV versions of the rest of their line up. It seems that it may be harder to now move the tech upmarket, with more exacting buyer having knowledge of its humble begins.

Tesla should be flattered. Mercedes has built a Model S.