The Peugeot 308 has been substantially overhauled for its third generation, and prices for the new model start at £24,000.

A multifunction steering wheel is standard on all specification levels, as is Peugeot’s i-Cockpit, which brings a 10.0in digital instrument display, rear parking sensors and 'comfort seats'.

Plug-in hybrid power can be selected on Allure specification or higher and starts at £33,900.

GT trim will set customers back at least £28,650, with 18in wheels, full matrix LED headlights, cabin air-purification technology and a heated steering wheel, along with Peugeot’s Driver Sport Pack, which allows for variable accelerator response. 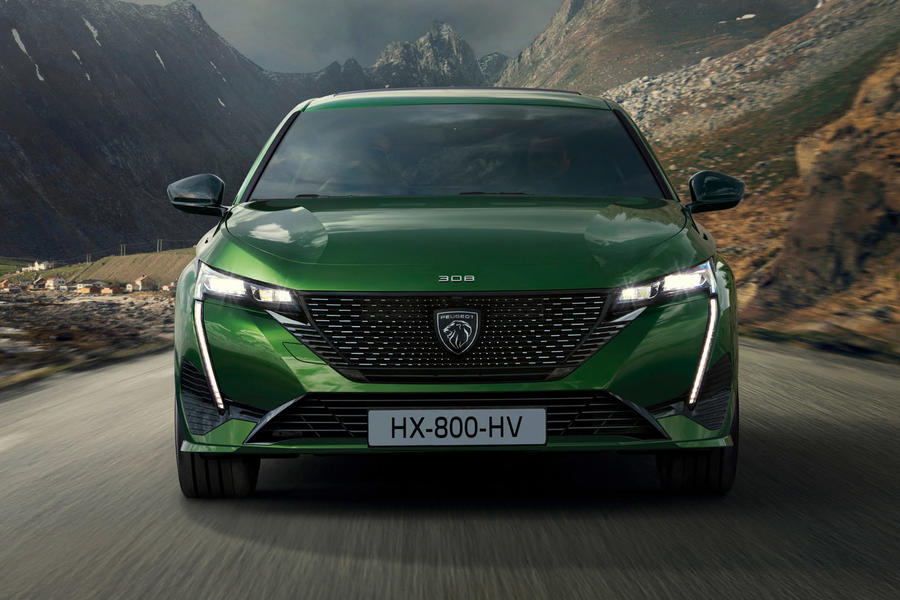 The 308 is now more closely related visually to newer Peugeot models including the Peugeot 208, 2021 Peuegot Peugeot 508, Peugeot 2008 and Peugeot 3008, with a front end characterised by the firm's trademark 'fang' LED daytime-running lights, slim headlights and a large grille housing Peugeot's new shield logo. This will be rolled out to all Peugeot models and dealerships worldwide over the coming years.

The hatchback's wheelbase has been extended by 55mm and its overall length by 110mm to offer more space in the back seats. It also sits 20mm lower, in line with a heightened focus on aerodynamic efficiency, as also indicated by its lengthy curved bonnet and more heavily raked windscreen.

This focus is particularly evident in the design of the rear end, which features a much more prominent spoiler than that of the outgoing car and a sharp air-channelling crease, continued from the sides and integrated into the wraparound light bar. The 308 has a slightly improved drag coefficient as a result of its new proportions, of 0.28Cd. 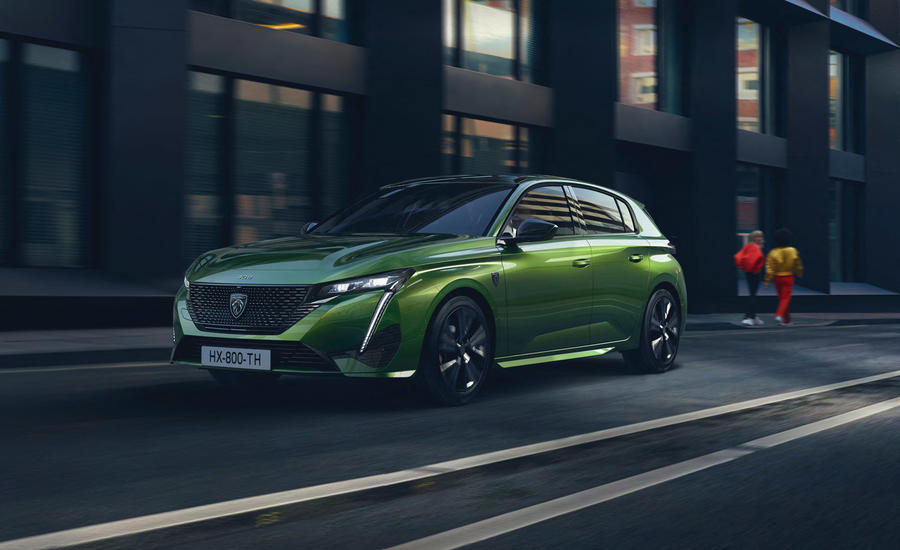 The 308's EMP2 platform (shared with the Citroën C5 Aircross, DS 7 Crossback and Vauxhall Grandland) is compatible with a range of petrol, diesel and electrified powertrains.

Two plug-in hybrid options will be available from launch, pairing a turbocharged petrol four-cylinder engine (tuned to 148bhp or 178bhp) with a 109bhp electric motor attached to the eight-speed automatic gearbox. They both use a 12.4kWh lithium ion battery pack offering an electric-only range of up to 37 miles and capable of charging in just under two hours from a 7.4kW charger.

Both PHEV options are front-wheel-drive, but a top-rung PSE-badged four-wheel-drive hybrid hot hatch is expected to follow as a sibling for the Peugeot 508 PSE with around 300bhp and substantially improved performance.

The ICE-only offering comprises a 1.2-litre three-cylinder petrol with 108bhp or 128bhp and a 1.5-litre four-cylinder diesel with 128bhp.

While the top-rung petrol is available with the eight-speed automatic gearbox, the other combustion engines are paired exclusively with a six-speed manual. Full performance and economy data for all powertrains will be revealed closer to the 308's launch in the second half of 2021.

A late-life update for the previous 308 introduced elements of Peugeot's current i-Cockpit interior layout, but the latest generation gains an updated set-up that mirrors the predominantly digital and angular design of other Peugeot interiors.

A downsized, performance-inspired steering wheel houses certain controls for the infotainment system and driver aids, but the centrally mounted 10.0in touchscreen - angled slightly towards the driver - replaces the majority of physical buttons and switches.

However, a row of so-called 'i-toggle' switches below this screen can be individually configured to control separate functions, according to the driver's preference. 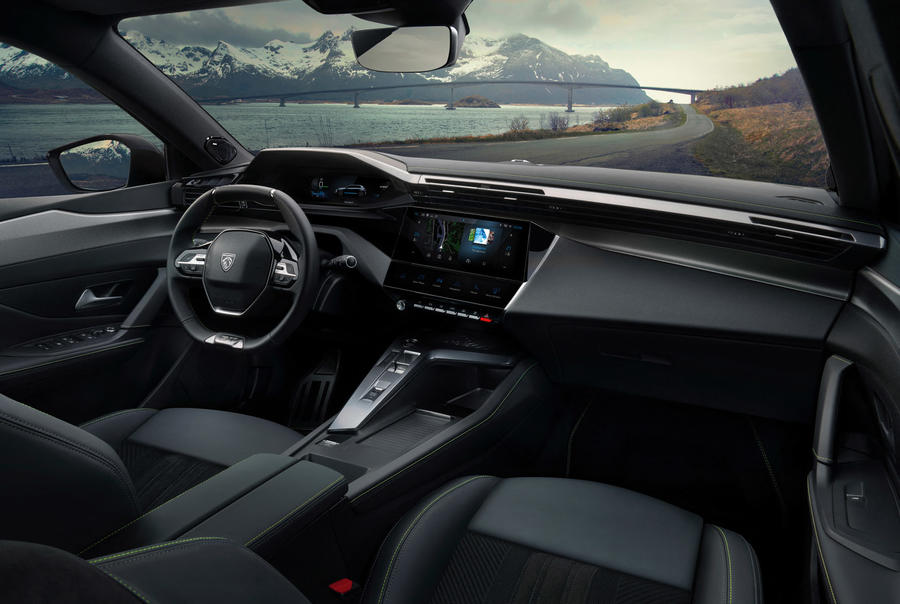 The infotainment itself aims to provide the same level of functionality as a modern smartphone and places greater emphasis on personalisation. Up to eight individual profiles can be stored, two phones can be connected at once via Bluetooth and smartphone-mirroring functionality is now wireless as standard. Drivers can also use the new 'Okay, Peugeot' voice control function to change infotainment settings without taking their eyes off the road.

Various flourishes throughout the interior hint at Peugeot's renewed upmarket push. Alcantara and embossed leather feature, depending on trim specified, and the front seats can be equipped with 10-way electric adjustability and a multi-programme pneumatic massage system. 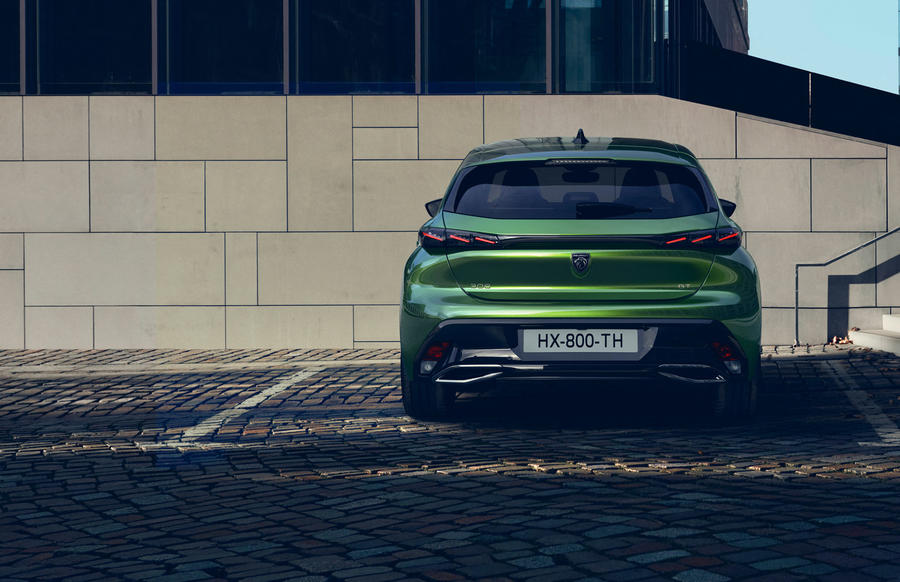 The 308's Drive Assist 2.0 package represents "a further step towards autonomous driving", according to Peugeot. New features included as part of the upgrade - either optionally or as standard - include long-range blindspot monitoring, rear cross-traffic alert, a cleaning nozzle for the reversing camera, 360deg parking assistance and wing mirrors that automatically lower when the car is reversing.

One of the better looking iterations of the 308 in my opinion with some nice design details, and interior looks classy in the shots on here.

Interesting to see how it drives, as some of them have been very boring and in truth 1.2 3cylinder 128 bhp engine doesn't sound too promising, pushing you to buy the expensive PHEV. However, up to 37 max range for PHEV doesn't sound that convincing either.

I'd say that the price for the plug in's aren't too bad considering. I Corolla with the 2.0 hybrid in mid spec is over 30k, and can't do more than a mile or so on full electric. I would happily have one as my company car and save some money. I get taxed heavily because I have a company car, but I can't do my job without one. It isn't a benefit at all, it is a tool, which is very frustrating.

So £8k extra for a plug-in, best leave that to the tax dodgers, most powerful non battery assisted engine, 128ps 1.2, odear.

Other than that design wise it was all going so well, till that grill, hideous from corner to corner and could challenge some BMWs for the worst front end.