BACK TO ALL NEWS
Currently reading: 2021 Peugeot 508 PSE: 355bhp hot plug-in hybrid revealed
UP NEXT
Ford backs call for European ban on new ICE cars from 2035

Peugeot’s new Sport Engineered division has unveiled the Peugeot 508 PSE as the brand’s most powerful production car yet.

As the first in a line of hybridised performance models to be sold under the PSE banner, the hot new 508 acts as a “technological showcase”. It also arrives as Peugeot gears up to make its landmark return to top-flight motorsport with a Le Mans hypercar entry in 2022.

The 508 PSE production car is available in both saloon and estate guises and holds predominantly true to the aggressively styled Peugeot 508 PSE concept shown at the Geneva motor show in 2019.

Its bright green exterior accents and brake calipers are a nod to the electrified underpinnings and – together with bespoke 20in performance alloy wheels, aerodynamically enhancing front winglets, a gloss black diffuser and black contrasting trim details – set the PSE apart from the standard 508. Three colours will be available: Perla Nera Black, Pearl White and Selenium Grey.

The PSE arm’s ‘Kryptonite’ claw-style signature, inspired by the rear light design of the historic Peugeot 504 Coupé, has been applied to the front wings, rear window panel and steering wheel. 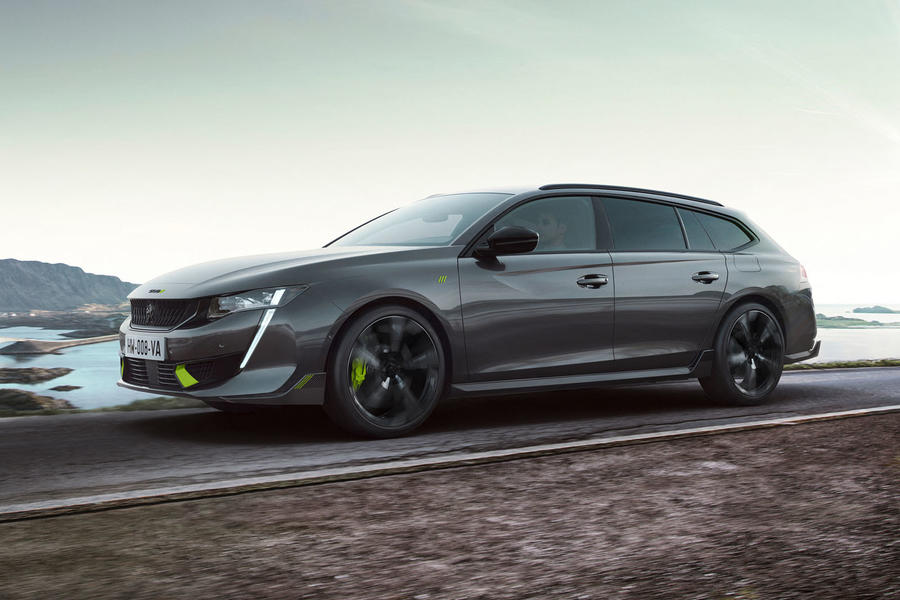 The 508 PSE’s hybrid powertrain combines a 197bhp 1.6-litre turbocharged petrol four-cylinder with a pair of electric motors – one with 109bhp on the front axle and one with 111bhp at the rear – sending a combined 355bhp and 386lb ft to all four wheels through an eight-speed automatic gearbox.

That 133bhp boost over the Peugeot 508 225 GT plug-in hybrid means the PSE can hit 62mph from rest in just 5.2sec and reach an electronically limited top speed of 155mph.

Its 11.5kWh lithium ion battery – which does not reduce cabin space or boot capacity – offers an electric-only range of 26 miles and can be fully charged in two hours using a 32-amp wallbox. The 508 PSE achieves 139mpg on the WLTP combined cycle, emitting 46g/km of CO2.

As well as offering enhanced straight-line performance, the new model has been tuned for “heightened driving pleasure” and improved agility. To that end, it has variable three-mode shock absorbers, a widened track at the front and rear, Michelin Pilot Sport 4S performance tyres and 380mm front brake discs with four-piston calipers.

Five driving modes are available. Electric mode leaves the petrol motor dormant at speeds of up to 86mph. Comfort softens the suspension. Hybrid automatically switches between the two power sources, as appropriate. Sport delivers the maximum 355bhp combined output and tunes the steering, suspension and throttle for a more engaging experience. The 4WD mode can be used for maximum traction in slippery conditions. 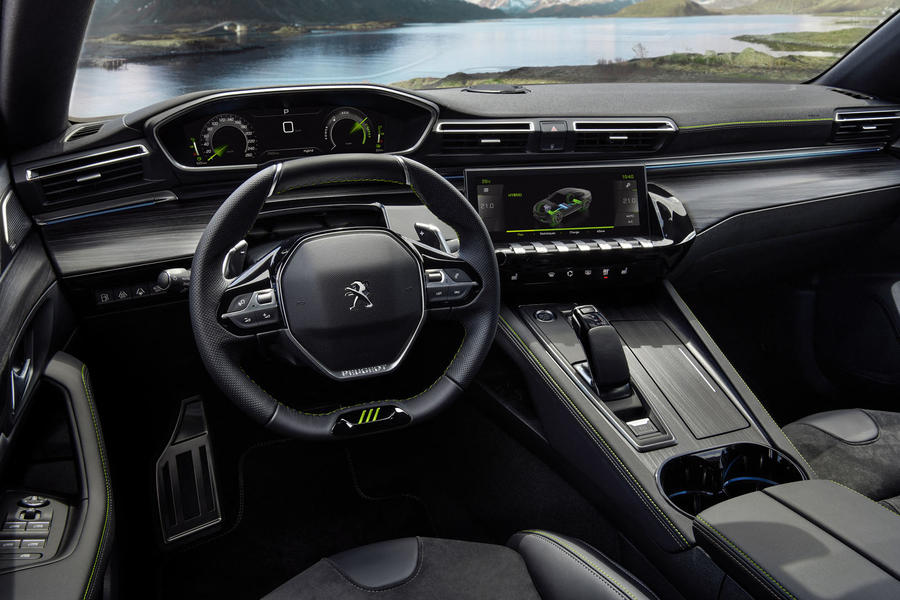 The interior is familiar from the standard 508, with Peugeot’s i-Cockpit layout bringing a 10.0in high-definition infotainment screen and its trademark ‘piano key’ physical controls. The most obvious additions are the bright green upholstery stitching and bespoke graphics for the digital display and central screen. The seats are trimmed with a blend of leather, mesh and Alcantara, and a Focal premium audio system is fitted as standard.

Future models from Peugeot Sport Engineered are expected to feature similarly outlandish styling cues and significantly uprated powertrains over the standard cars on which they are based.

The 508 PSE will arrive in dealerships in the first half of 2021 and is tipped to pave the way for a PSE rival to the Volkswagen Golf R. A hybridised PSE performance version of the next-gen Peugeot 308 hatchback will appear with four-wheel drive and more than 300bhp.

It surprises me. One thing I am sure is that Peugeot never overstate their performance figures to paste on a glossy magazine. In fact most of their models seem able to shave at least a second off the officially declared figure.

What is going on at Peugeot?

This thing has lurid green all over it. 20inch wheels! Halford style crappy winglets on front and rear bumpers, and whilst quick, its not 355BHP quick, so is it the weight of a small moon? It even has ugly kid glass to complete the naff add ons.

I think the decent 508s will exist at the bottom of the range, but in truth you still cant have it with a manual box and a petrol engine, nor pure electric, both of which would have far more appeal than this thing

That was 25 years ago...things have moved on a little.

That was 25 years ago...things have moved on a little.

It was, they have, but not for the better sadly

The wagon version of this instantly tops my 'want' list. Reckon it'll be £50k though, probably too punchy for a Pug to succeed.