BACK TO ALL NEWS
Currently reading: New 2021 Nissan Qashqai to be revealed on 18 February
UP NEXT
Lotus Emira vs Porsche 718 Cayman

New 2021 Nissan Qashqai to be revealed on 18 February

The all-new Nissan Qashqai will be officially revealed on Thursday 18 February, with the brand promising it will "set a new standard for the segment with appealing design, advanced technology and dynamic driving".

The new Qashqai is now official - see it here

The family SUV, which joins a growing number of rivals that have ditched diesel entirely, will be offered with either a mild-hybrid four-cylinder turbocharged engine or the new ePower hybrid system, which makes its European debut.

The first, more conventional offering is an updated version of the 1.3-litre turbo engine found in many current Nissan, Renault and Mercedes models. All versions feature a 12V mild-hybrid system, selected for being more affordable than a 48V set-up, mated to a small lithium ion battery to offer torque assist and improved stop-start functionality. 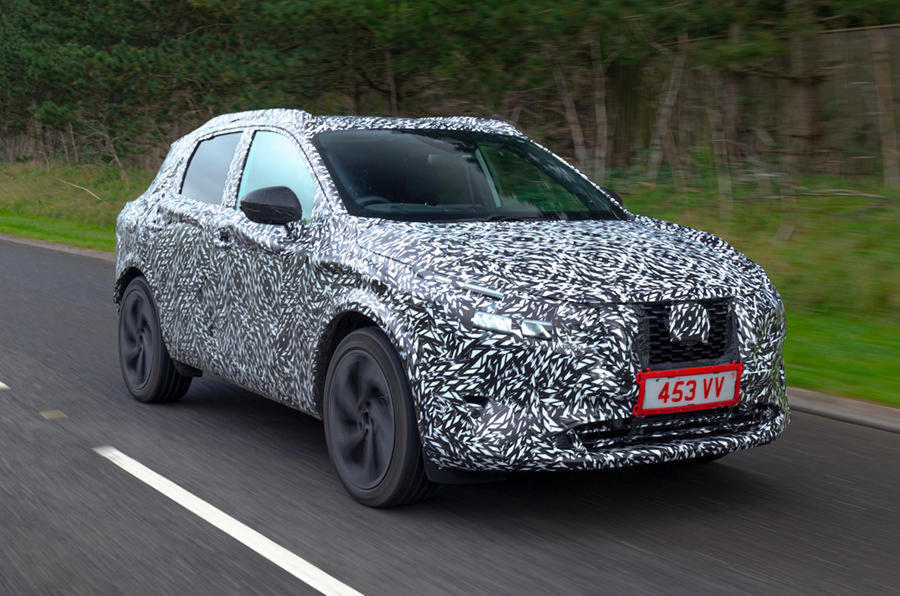 Adding 22kg to the powertrain kerb weight, the mild-hybrid system also offers fuel economy improvements and a claimed 4g/km reduction in CO2, although homologation figures have yet to be provided.

The engine is offered in 138bhp or 156bhp forms, the latter of which can be specified with all-wheel drive. The all-wheel drive system itself is said to be “more intuitive and intelligent”, features five driving modes, and can shift power to the rear wheels five times quicker than the old system.

Either a six-speed manual transmission or (on the more powerful unit) a CVT automatic is offered. Nissan has gone from CVT to dual-clutch and back to CVT in the past few years, but claims the new transmission is more efficient and responsive yet avoids the traditional ‘elastic band effect’ - where the engine revs out of kilter with road speed - thanks to simulated stepped gear ratios.

The more advanced offering is a new ePower hybrid system, which isn’t a plug-in but differs from parallel hybrids because the engine isn’t directly connected to the wheels. Instead, it charges a battery, which in turn powers an electric motor to drive the wheels.

The system has proved hugely popular in Japan, thrusting the relatively old Note supermini into the biggest seller in its segment. Nissan claims it has been “significantly upgraded” for European customers, however, with a 47%-larger electric motor and a more powerful combustion engine.

That engine is a new 1.5-litre unit that features a variable compression ratio - a first for the brand in Europe - to boost efficiency. The electric motor puts out 187bhp (the engine providing 156bhp to charge the battery) and 243lb ft of torque. That’s enough, product planning boss Marco Fioravanti claims, for “really quite impressive” performance and typical EV driving characteristics at lower speeds.

Like parallel hybrid set-ups, the system offers a relatively negligible EV-only driving range (below two miles) before the engine-generator kicks in. However, it’s claimed to drive like a classic electric car, with Nissan even fitting the ‘e-Pedal’ system from the Leaf for one-pedal driving using regenerative braking.

The new model, which battles with the Volkswagen Volkswagen Tiguan for the title of segment best-seller in Europe, has grown in physical size but is said to maintain the compact exterior loved by loyal customers.

“Exterior dimensions versus exterior size is absolutely critical in Europe, and we have one of the best packages on the market right now," product director Nicholas Tschann told Autocar.

It’s 35mm longer, 32mm wider and 25mm taller than the outgoing car, with 20mm added to the wheelbase - described by bosses as the “minimum” size the Qashqai needed to grow to keep distance between it and the Nissan Juke. 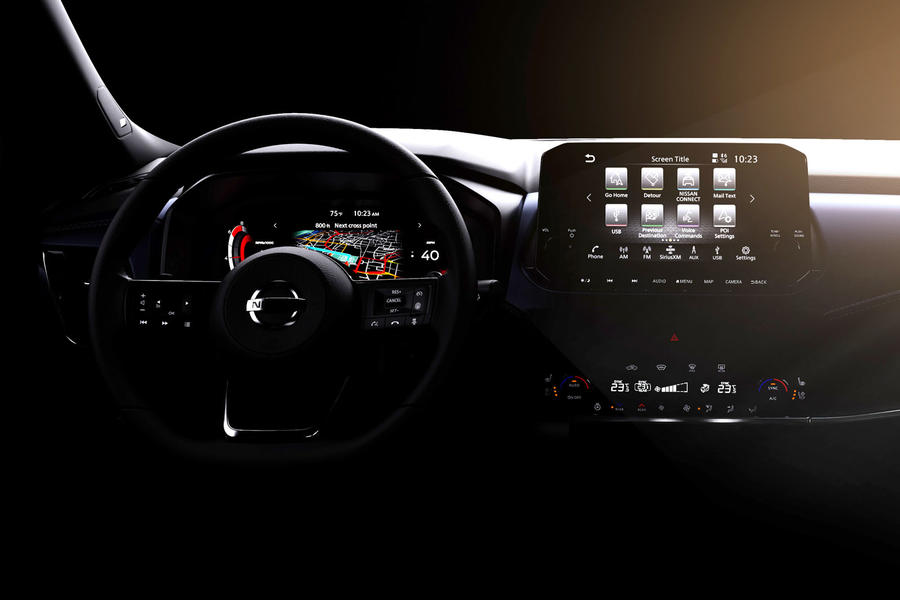 Shoulder room and rear knee room are said to have been improved substantially as a result, as have ease of passenger ingress and egress.

The boot now offers over 500 litres of space, with a lower boot floor enabled by the new platform, plus underfloor parcel shelf storage and wipe-clean surfaces. A powered tailgate is offered for the first time, too, with the ability to open it by waving your foot under the bumper.

Further practicality changes include a redesigned centre console with additional storage, extra adjustment for more ergonomic seats and a capless fuel filler cover that can be opened externally, replacing the old driver’s footwell release. A new space-saving ‘shift-by-wire’ automatic gearbox shifter is said to replicate the physical action of a traditional lever, which customers prefer.

Cabin tech has been overhauled, too, with a new 9.0in high-resolution touchscreen offering wireless Apple CarPlay and, Nissan claims, “just about everything that’s available on the market” in terms of connected and app-based services.

That’s joined by a 12.3in instrument display on top models, plus a 10.8in head-up display claimed to be the largest in its segment. A 15W wireless phone charger plus a combination of USB-A and USB-C ports will feature, alongside Bose audio packages.

Nissan's ProPilot driver assist tech, which includes level-two semi-autonomous lane-keeping assistance, will be “democratised” by becoming standard on mid-spec trims and above.

A number of premium touches have also been brought into the new Qashqai despite its mass-market intentions. These include massaging seats controllable via the touchscreen, ambient lighting and an “extensive” emphasis on tactile, high-quality materials. Top models feature nappa leather that takes 25 days to produce, with an embroidered 3D diamond quilting.

The third iteration of what the brand terms its “pioneering” crossover aims to build on its segment-leading success, with more than three million examples of the first two generations sold across Europe and five million globally.

It will use a new platform, is designed, engineered and built in the UK and, for the first time, won’t feature a diesel engine. The Japanese manufacturer has released only disguised prototype shots and a preview image zoomed in on the headlight detail of the new model. However, the prototype images show that the overall profile of the new car is familiar. The front end has been inspired by the design of the new Nissan Juke, albeit with a less radical interpretation.

Fioravanti claims the overall design objective has been to offer “the best stance in the segment”, with a “more muscular yet dynamic image”. A wider track, bigger-diameter wheels and a stronger shoulder line are claimed to enable this. 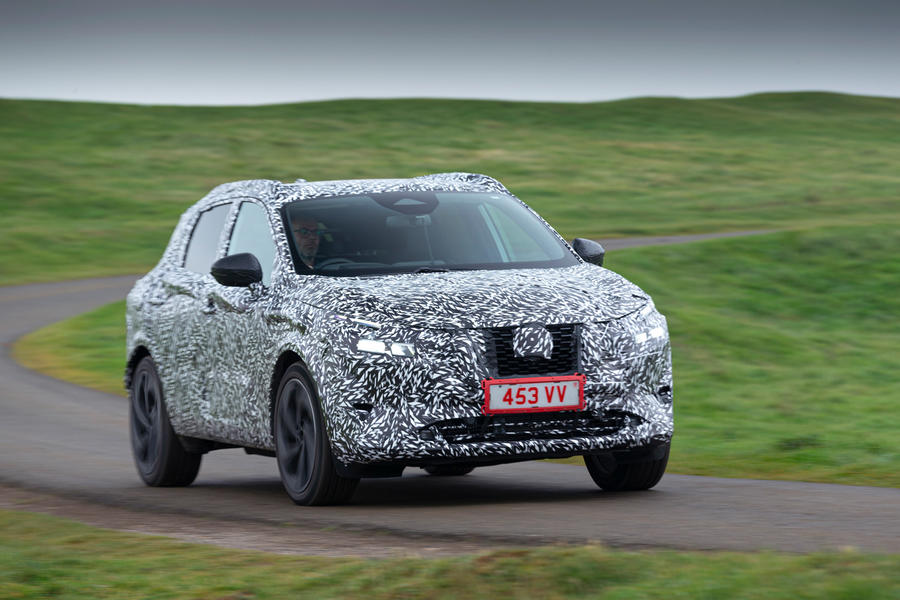 Underpinning the Qashqai is a new version of the Renault-Nissan-Mitsubishi Alliance’s CMF-C platform, overhauled to enable greater electrification. Nissan says it allows a reduction in weight but an increase in stiffness – key to improving both efficiency and dynamics.

The platform uses a greater proportion of ultra-high-strength steel than the old car’s (up from 20% to 30%) and the underfloor structure is more rigid as Nissan aims for the highest possible safety rating in the imminent, more stringent crash tests. There is also structural bonding in key body joints to improve strength further. Overall stiffness is up 41% on the outgoing car.

Despite all this, Nissan has reduced the weight of the car’s body-in-white by 60kg. Contributing to this is the use of composite materials for the bootlid and fuel cap, while using aluminium for the doors and bonnet has saved 21kg.

The suspension layout is familiar. For two-wheel-drive Qashqais with wheels up to 19in, a torsion beam rear set-up is used. Four-wheel-drive models and those with 20in wheels get a multi-link arrangement.

The Seat Ateca rival’s host of new tech features includes a more advanced ProPilot driver assistance package. This has more sophisticated sensors to allow, for example, the predictive forward collision warning to follow two cars ahead, rather than just the one immediately in front.

The autonomous braking has been tweaked for more smoothness, with an increased speed range, and the lane-keeping tech has been made smoother and more natural, while being able to self-steer in cornering forces up to 0.2g. Alongside a system that can automatically slow your car to the legal limit, there’s one that reduces speed ahead of corners, junctions and so on. All Qashqais will feature LED headlights as standard, too. 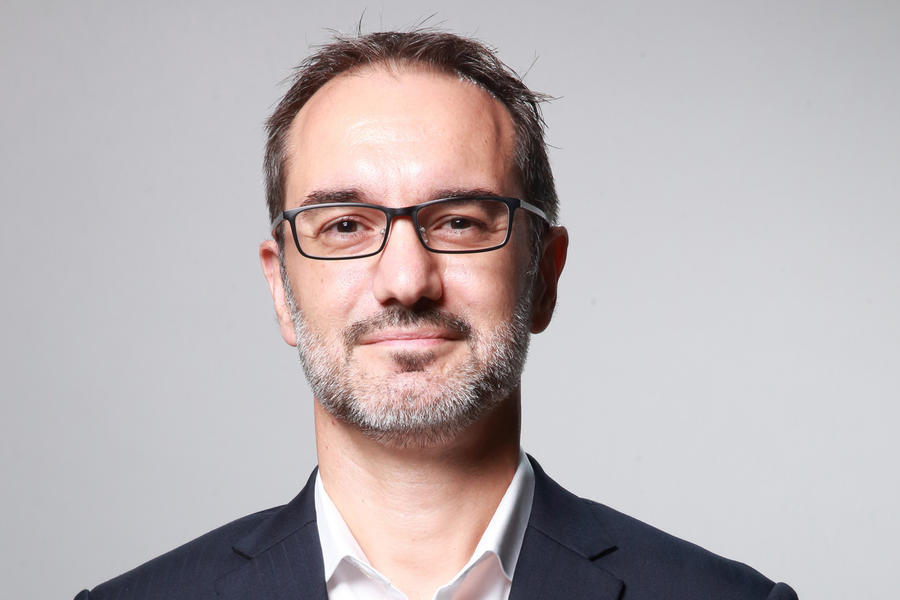 Why no diesels for the new Qashqai? It was a core powertrain for the old one.

“As a region, we’ve already communicated our intention to progressively end our diesel offering. Today, it’s still a part of the market, but we are overly confident that the customer is best served with petrol and hybrid. ePower offers much more than a regular diesel: performance, refinement, comparable economy and accessibility.”

Are there any plans for a plug-in hybrid version?

“It’s not something we’re offering. We are very confident the ePower can offer better accessibility and cost [than a PHEV] and we’re willing to maintain this level of accessibility known in Qashqai.”

Would you follow other makers, such as Renault, in offering a coupé version?

“We don’t see the need today [for a coupé-SUV Qashqai]. The audience of Qashqai is very wide. We think we have made the standard car dynamic and elegant.”

Is there potential for a performance version, say, with Nismo branding?

“I cannot communicate anything about that today, but I am smiling. This is the key model in Europe and we are not closing the door. This is not the end of the story. This is the start. The life cycle will be longer than before and there will be some surprises. Keep watching.”

si73 15 January 2021
Why is it being referred to as an SUV when it's a crossover, the X trail is the SUV, quashqai was always a tall focus competitor.
superstevie 15 January 2021

More hits to the website, which generates more ad revenue. People looking for cars of this type will type in SUV, a more popular term than crossover to the masses. into the computer webs, and voila! Autocar article

Is that it, your reply just proves how unstable you are.