BACK TO ALL NEWS
Currently reading: Mercedes-Benz GLB previewed ahead of Shanghai debut
UP NEXT
Hidden gems: A peak behind the scenes at Beaulieu

First official image shows interior design of new BMW X1 rival, with the SUV due to be unveiled in the coming weeks
Open gallery
Close

Mercedes-Benz's second foray into the hotly contested small SUV sector is imminent, with its new GLB set to be revealed in concept form at the Shanghai motor show later this month.

The brand has released its first official image of the car in the form of a rendered view of its interior. It takes clear influence from the latest Mercedes-Benz A-Class, with a large combined digital instrument and infotainment display above AMG GT-style air vents.

The GLB, sitting above the Mercedes-Benz GLA and below the larger Mercedes-Benz GLC, will be a fully fledged rival to cars such as the BMW X1, Audi Q3, Volvo XC40 and Jaguar E-Pace. The concept version appearing in the coming weeks will be close to production spec, with the finished car making its public debut at the Frankfurt motor show in September.

Alongside regular variants, a hot AMG 35 variant was recently spotted testing. Visual differences include larger wheels to house uprated brakes, a larger air intake on the lower front bumper and a redesigned grille pattern echoing that of other AMG models. 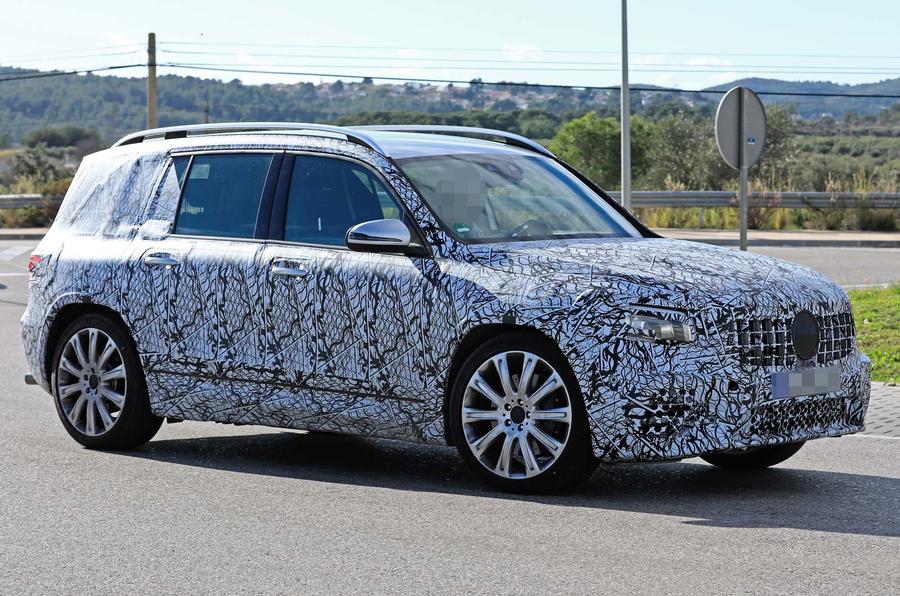 The design of the rear bumper has also been revised to allow for the addition of a dual-exit exhaust system, while the car's lower stance hints at a sportier suspension set-up.

Using the same 2.0-litre mild hybrid petrol engine found in the new A35 hot hatch, the GLB 35 will produce around 302bhp. It will be joined by a range-topping GLB 45 after launch.

Due to arrive in showrooms before the year is out, the GLB mixes old-school G-Class influences, including a boxy profile and an upright rear end, with contemporary details, such as the brand's softer front-end design and LED headlights.

The GLB, a sibling to the Mercedes-Benz GLA, has been given this less conventional appearance in an attempt to stand out against softer-looking rivals such as the BMW X1 and Audi Q3.

Trademark filings suggest that variants badged 200, 220 and 250 will be available, using the same engines as the Mercedes-Benz A-Class and Mercedes-Benz CLA.

The line-up will feature an updated range of Mercedes/Renault-Nissan four-cylinder petrol and diesel units, producing upwards of 160bhp. Also planned is a petrol-electric plug-in hybrid variant with a modest electric-only driving range.

Development of the long-mooted GLB has been accelerated in order to bring the car to market this year.

The move is part of Mercedes’ plan to retain sales momentum in the lucrative premium compact car class.

The GLB is part of a future eight-strong family of compact models announced by Mercedes chairman Dieter Zetsche at the 2018 Detroit motor show. Its likely starting price will be around £32,000.

One of three additions to Mercedes' existing compact car range of five, the GLB joins a new four-door Mercedes-Benz A-Class Saloon, along with an as-yet-unknown model; one possibility is a dedicated coupé in the mould of the Audi TT. The new line-up kicked off with the launch of the fourth-generation A-Class last year. 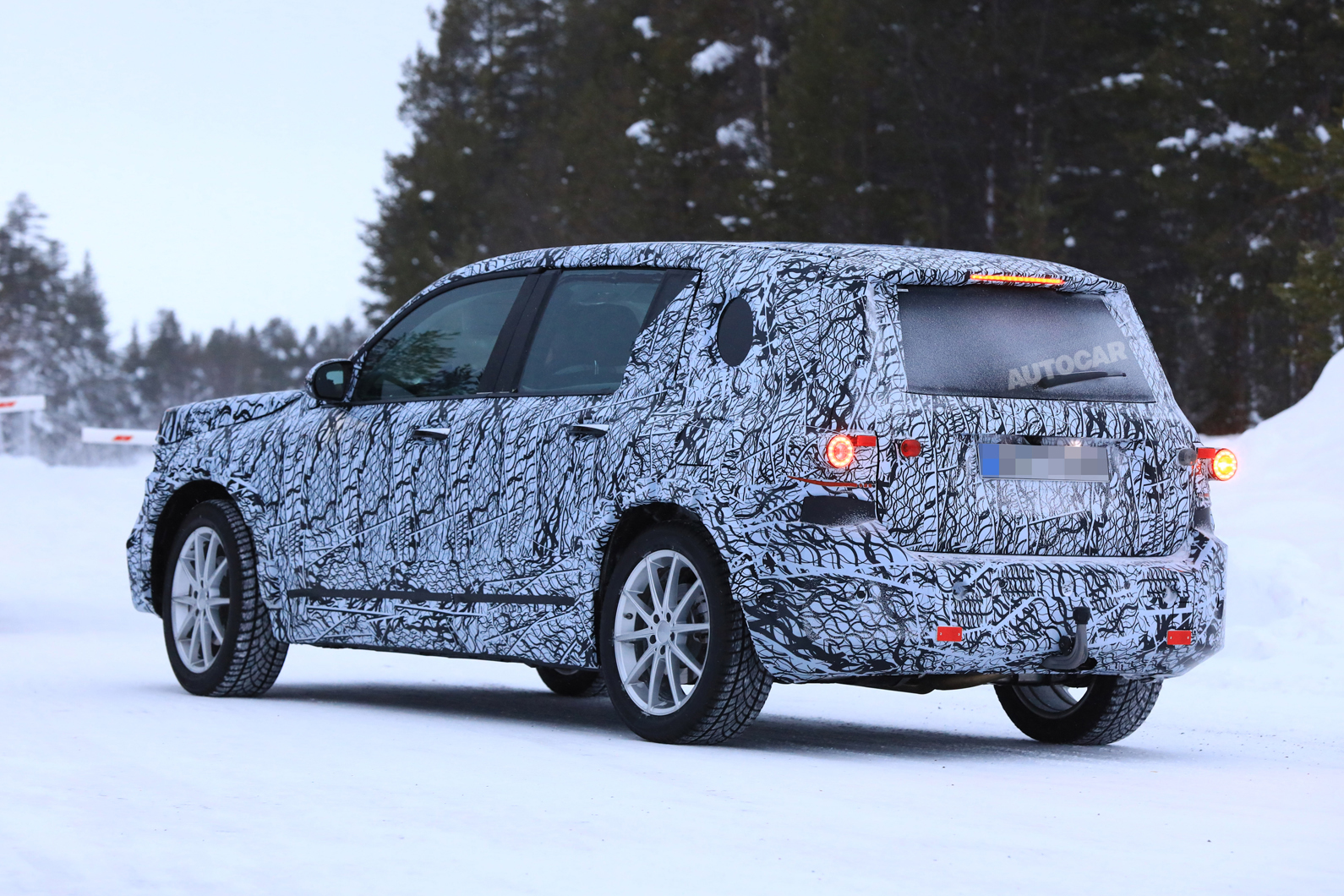 The GLB is known under the internal codename X247 and is said to draw heavily on the well-received Ener-G-Force concept seen at the 2015 Los Angeles motor show.

It combines styling cues inspired by the 40-year-old, tough military vehicle design of the G-Class with more contemporary flourishes from the 2014 G-Code concept, although latest shots of the development model suggest a lower, boxy appearance of the GLK, the Mercedes-Benz GLC predecessor that was never sold in the UK.

Buyers will be able to choose between a series of optional styling packages, including a rugged-looking off-road appearance, with extra cladding and increased ride height, according to insiders privy to the final design.

Chosen by Mercedes board members over an alternative long-wheelbase Mercedes-Benz B-Class, the standard GLB earmarked for sale in the UK is set to be around 4600mm in length, making it 180mm longer than the outgoing GLA it indirectly replaces for the time being.

The GLB is based on a version of Mercedes’ MFA platform that will be reworked to have greater production flexibility and lower weight than today’s structure. It will be offered with a choice of two wheelbases, with either a five-seat or seven-seat layout, in a move mirroring that of the Q3, X1 and Volkswagen Tiguan.

Details remain scarce, but sources suggest the long-wheelbase variant, which extends to almost 4800mm, may be sold only in selected markets, such as China and the US.

My boomerang wont come back

Renault crap engine to pull this huge heavy donkey. Anyone smitten and daft who buys because of the snob value will soon be disappointed and flog it and will not buy another MB, hence my boomerang wont come back

Christ! 5 wheels....I hadnt noticed the Renault/Nissan engine bit, I was pretty enthusiastic about one of these for my wife until I read that.....no bloody way am I paying for a Mercedes-Benz with one of the crappiest engines to stalk this planet.

Nice V6 petrol would have been good!

Yes, the camo does it no favours,and yes, most of the opinions derided it for its Bauhaus interior, bu t equally, most just don’t like Mercedes, and yes, most aren’t being polite about it, my opinion changed?, well yes and no, everyone knows I’m not an SUV fan, but I’m not going to pour Petrol over it and set it on fire.....

Yes, it’s another posh SUV, and yes, in the Far East where owning a Mercedes is top of most People’s list this SUV will sell heck it might even go down well in Trumpland,and to be honest Suv’s Like this are bought as a status symbol not for the purpose they allegedly where designed for.