BACK TO ALL NEWS
Currently reading: All-new Mercedes-Benz G-Class revealed
UP NEXT
The 414bhp Volvo P1800: Driving Cyan's race-bred resto-mod

Mercedes has revealed its second-generation G-Class, which closely resembles the original utilitarian off-roader that was launched 38 years ago and has since received various updates.

So iconic is the G-Class’s styling that Mercedes has only mildly updated its angular exterior design and has instead focused on heavily revising the interior and improving its ride comfort and agility.

Opinion: can the iconic G-Class really reinvent itself?

Details such as the distinctive door handles and door-closing sound remain, as does the exterior protective strip, exposed spare wheel on the rear door and prominent indicator lights. 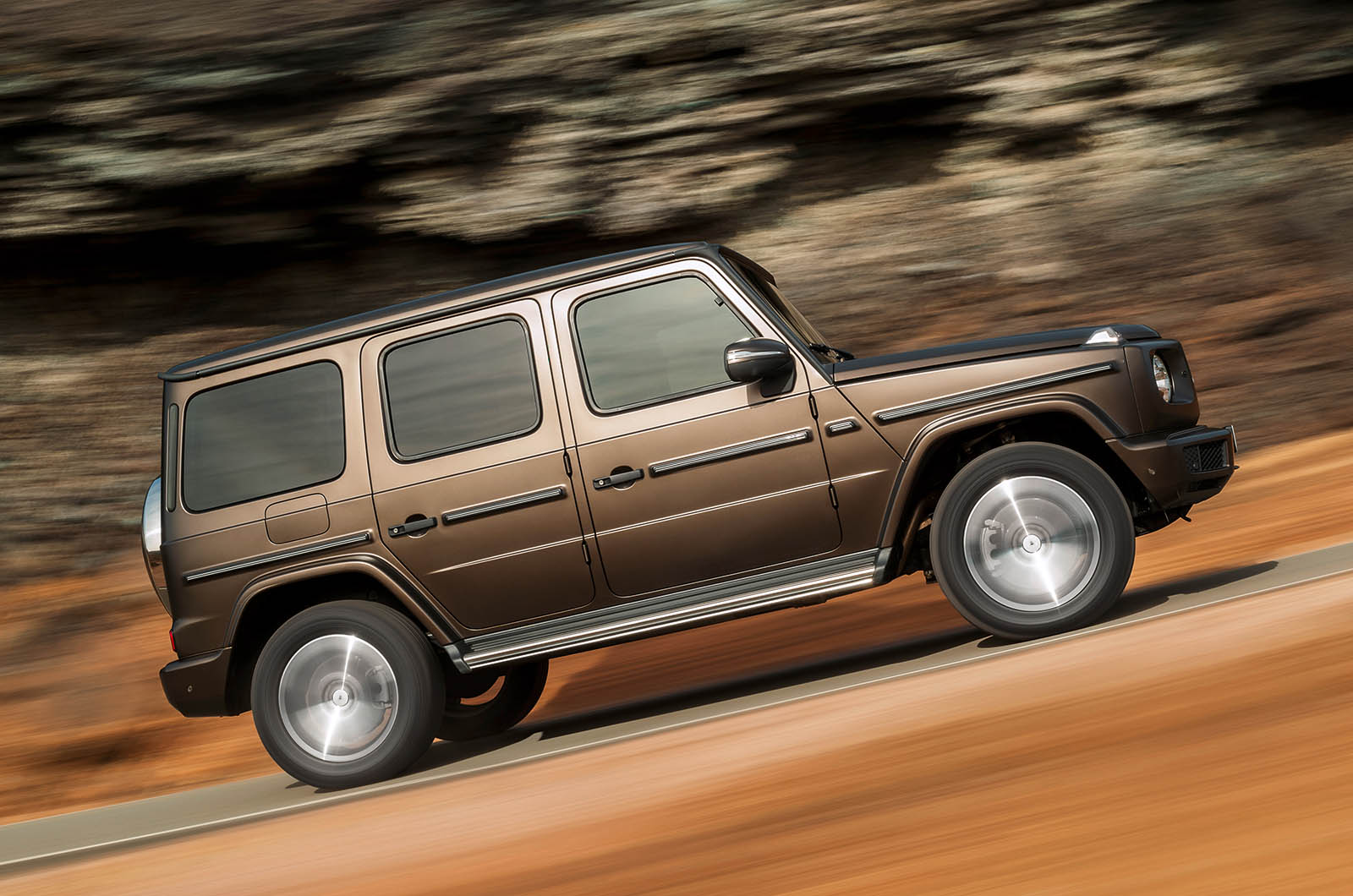 Despite the visual similarities, Mercedes claims surface quality is improved, resulting in “narrower, more precise gaps”, and the wheel arches and bumpers are a more integral part of the body, “looking less like add-on features”, says the car maker.

Land Rover Defender to be reinvented for 2019

The new G-Class is also 53mm longer and 121mm wider than its predecessor. Now measuring 4715mm long and 1881mm wide, it is still more compact than its Range Rover rival, which measures 4999mm by 1983mm.

Some of the new G-Class’s biggest aesthetic and technological changes are found in the interior. Mercedes’ intention is to provide greater comfort, technology and usable space for occupants while staying true to the model’s utilitarian origins. 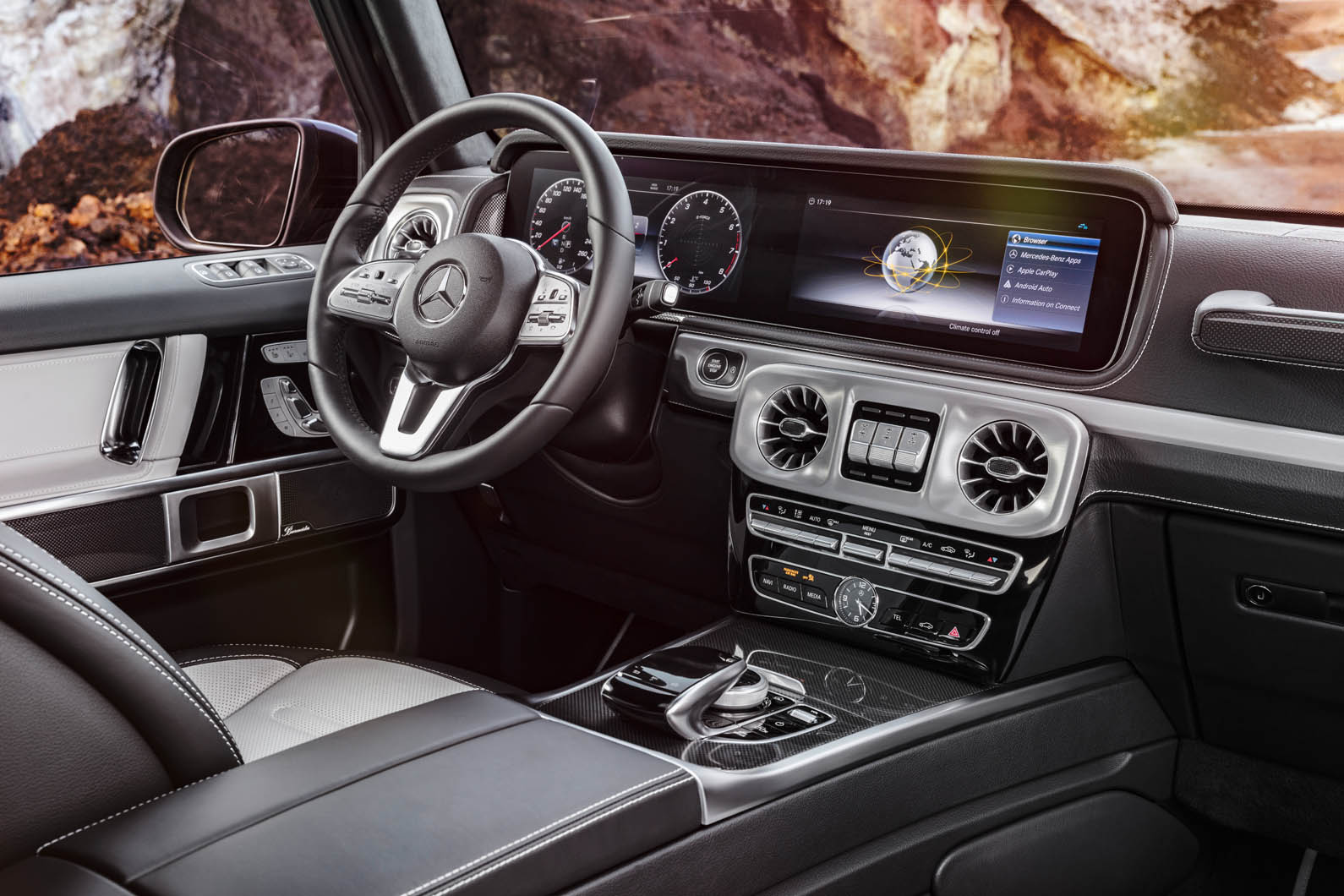 Echoing the interior of the E-Class, the G-Class has a multifunction steering wheel, which features touch-sensitive controls for the infotainment system, an electric handbrake and a gear selector stalk mounted on the steering column, as opposed to the more traditional gearshift in the centre console.

The story of the magnificent G-Wagen

It brings the G-Class in line with other Mercedes models equipped with automatic transmissions and opens up space on the centre console for the touchpad and rotary infotainment controller, as well as additional stowage areas. An analogue instrument panel comes as standard, but a ‘virtual’ display is optional.

Hallmarks of the original G-Class include a grab handle in front of the front passenger and chrome switches for the three differential locks. 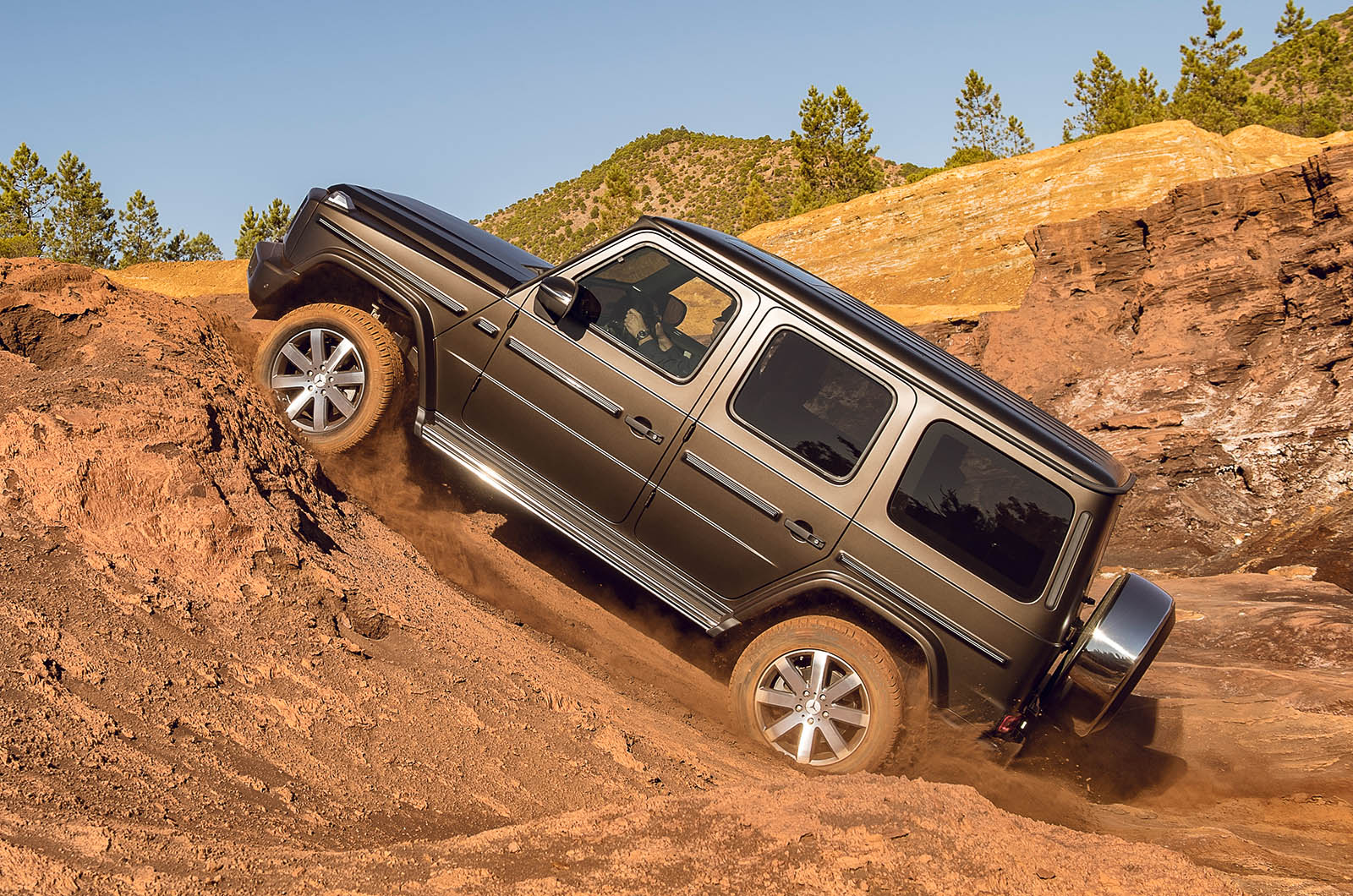 The car’s larger dimensions also mean a 40mm-longer wheelbase, contributing to more rear passenger space, an area that was criticised in its predecessor. Mercedes claims rear leg room has risen by 150mm and front leg room by 38mm. There are also increases in elbow and shoulder room in both the front and rear.

The rear seats can be tilted to nine different angles, meaning that they can be left upright to optimise stowage space in the boot or reclined for greater rear occupant comfort over long journeys. The rear bench also folds flat to increase the size of the luggage compartment. Mercedes has yet to announce the luggage capacity but it is expected to surpass the outgoing model’s 699 litres.

The rear view camera has also been improved. Mercedes boss Dieter Zetsche, speaking at the car's reveal at Detroit motor show, said: "As  any G-Wagon owner knows: the rearview camera in the current model mostly shows the spare wheel. That's why our engineers have now placed the camera below the spare wheel." The camera is also "one-hundred percent waterproof".

Alongside the interior, the other major focus for the new G-Class has been improved handling, with Mercedes stating that “the primary goal of development was to redefine the quality of handling both on and off the road”. As a result, it claims the G-Class is even better off road yet also “significantly more agile, dynamic and comfortable” on the road.

Zetsche added: "[The G-Wagon] is instantly recognisable - yet better in every dimension. This is the safest, the most efficient, most comfortable, but - first and foremost - the most off-road capable G-Wagon of all time." 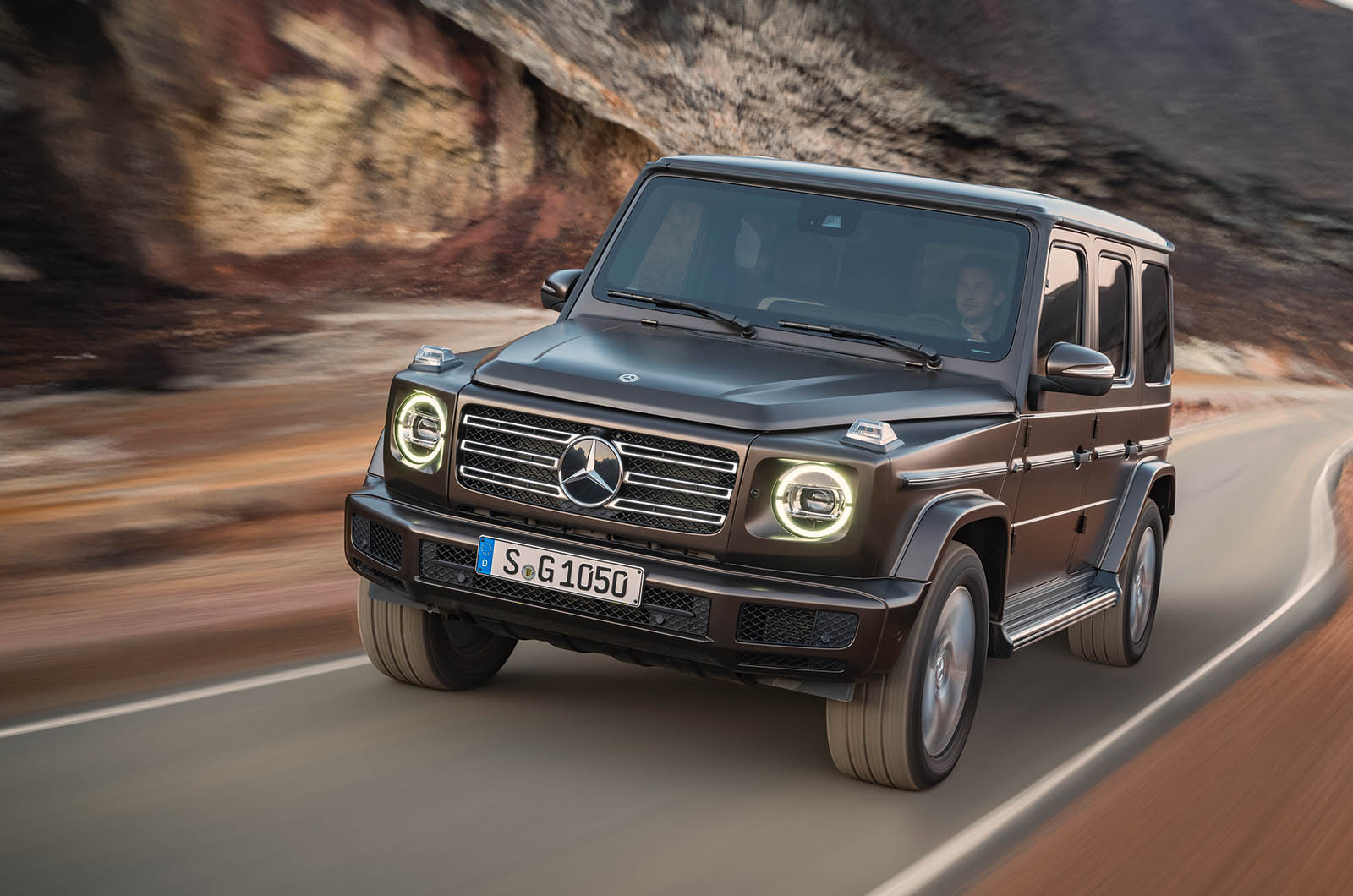 The G-Class retains the ladder-frame chassis of its predecessor in heavily modified form, which, along with a new aluminium body structure, means a 170kg drop in weight.

The new suspension has been developed with AMG. The independent suspension uses a double-wishbone front axle in combination with a rigid rear axle. The raising of the axles has helped increase ground clearance to 241mm, up 6mm.

Other improvements to off-road capability include a 70cm maximum fording depth (10cm more than before), a 30deg departure angle and a 31deg approach angle.

Body rigidity is also improved on the ladder-type frame, with a strut tower brace at the front end connecting to front strut towers. At the rear, the new rigid axle is controlled by four trailing arms on each side and a Panhard rod, which is claimed to make on-road driving more comfortable. 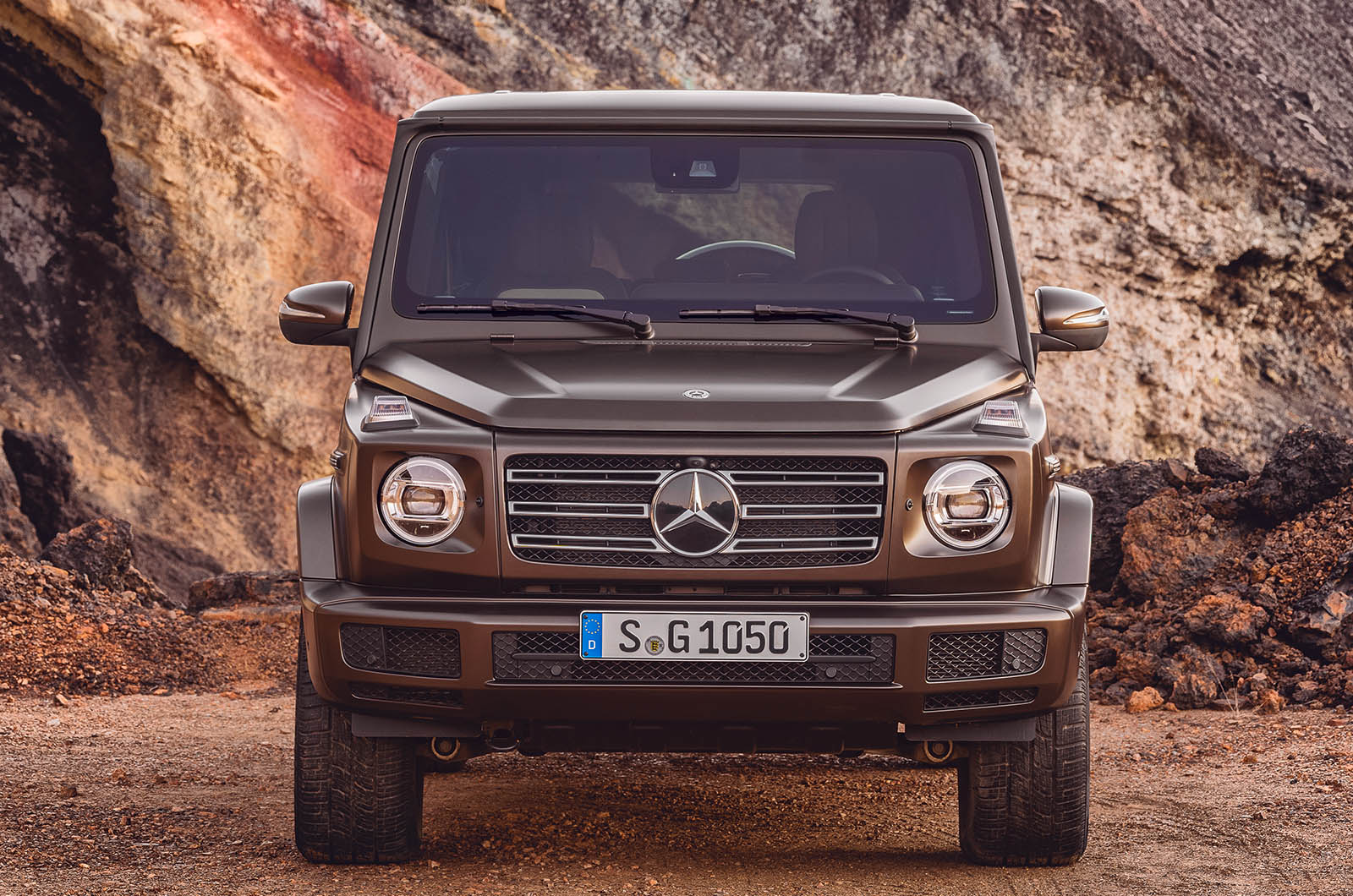 G-Class boss Gunnar Güthenke said: “With the body, our main focus was on increasing the vehicle rigidity and the connections between the suspension and drivetrain with the ladder-type frame.”

The four-wheel-drive model also offers up to five driving modes. Comfort, Sport, Individual and Eco echo modes are offered across much of the Mercedes range, allowing vehicle characteristics such as engine, transmission, suspension and steering to be modified. The fifth mode, G-mode, is for off-road driving only. It incorporates the three differential locks offered on its predecessor plus low-range gearing. G-mode adapts the damping and steering as well as the accelerator, avoiding unnecessary gearshifts, all of which “ensures optimum control and maximum off-road capability”, reckons Mercedes.

Another significant change is the adoption of a new steering system. The recirculating ball set-up, which dates back to the 1979 G-Wagen, has been replaced by a contemporary electromechanical rack and pinion arrangement, which is claimed to offer a precise and suitable steering response for on and off road. It also allows for the implementation of driving assistance systems such as Parking Assist.

The model also gets Mercedes’ nine-speed 9G-Tronic automatic transmission with torque converter, replacing the seven-speed gearbox of its predecessor. It has been specifically adapted to meet the needs of the car, says Mercedes, with reduced shift and response times. 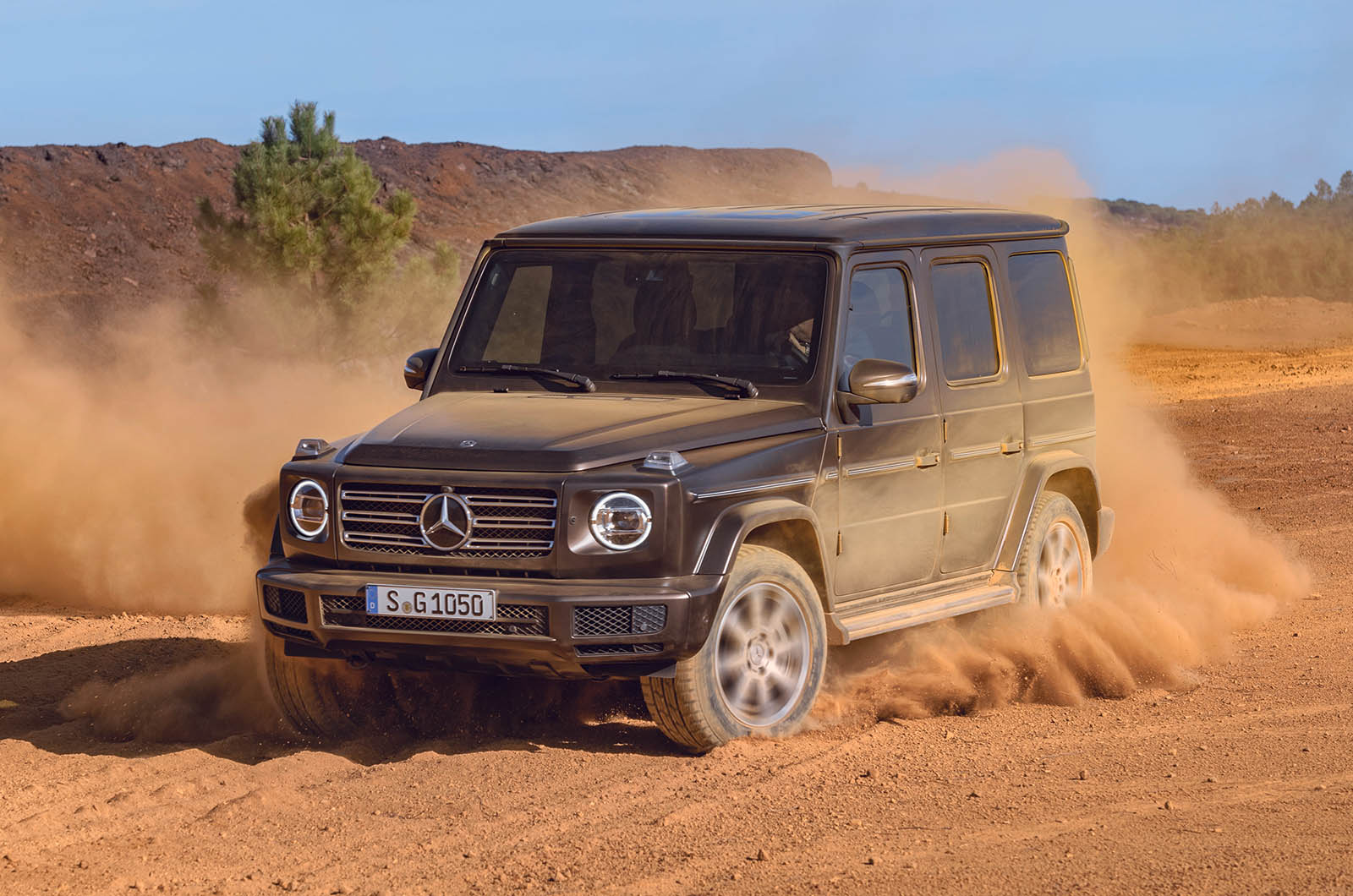 The new G-Class will arrive in the UK in August in Mercedes-AMG G63 guise, which is the most popular variant sold here. It will use the AMG-developed 4.0-litre V8 turbo petrol engine, with 603bhp and 627lb ft, and replace the current 5.5-litre turbo V8, which delivers 563bhp and 560lb ft. 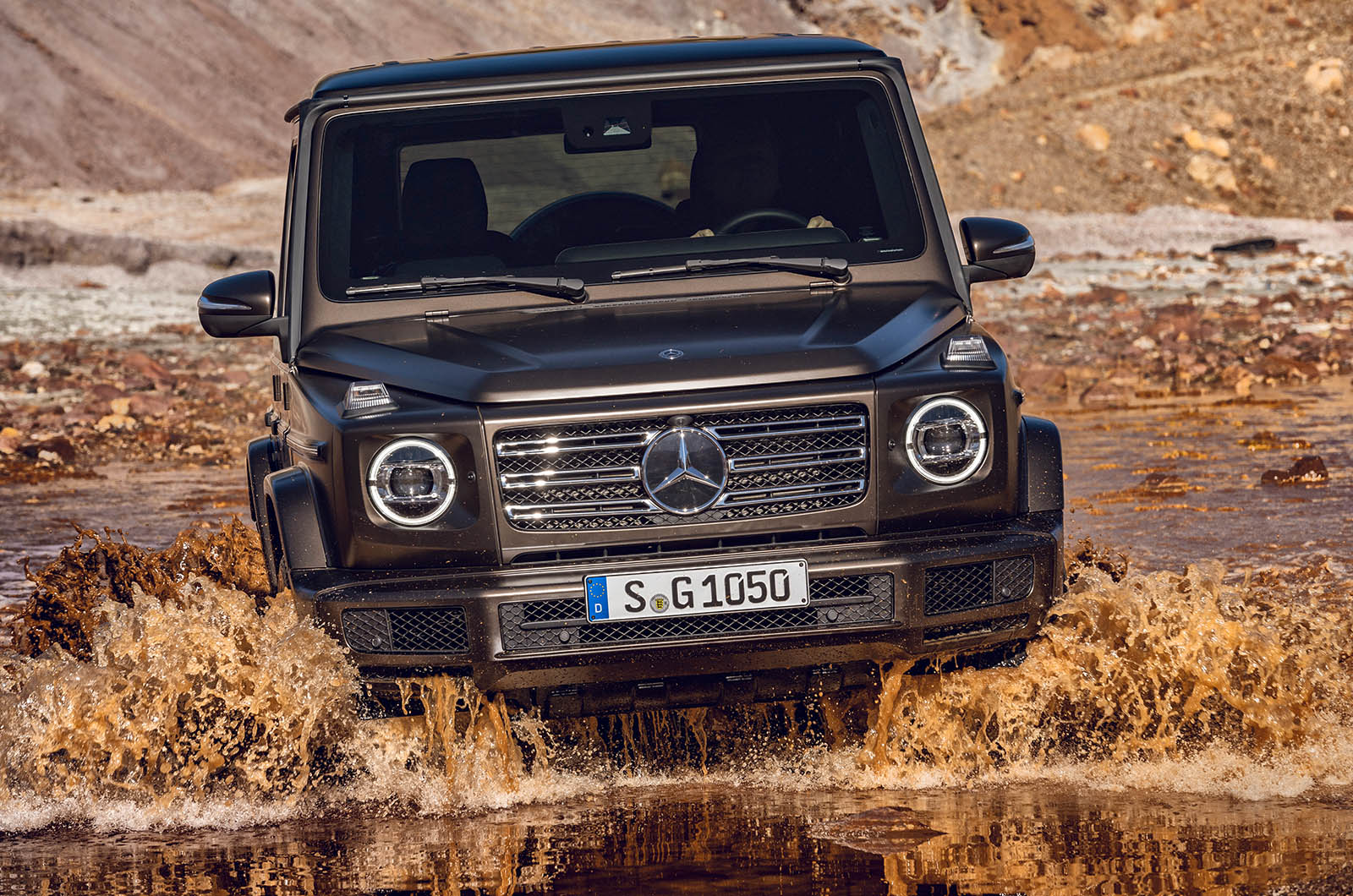 The 350d adopts the 2.9-litre straight six diesel engine slowly being rolled out across the range, including the S-Class and CLS. It will develop 282bhp and 443lb ft.

A G500, which uses the same engine as the G63 in a lesser state of tune, is confirmed for other markets and has not been ruled out for the UK.

Zetsche, talking at the reveal told the audience to "watch this space" when asked about an electric G-Class, alluding to Mercedes' announcement last year that all of its models would be electrified by 2022.

Despite the imminent arrival of the new G-Class, UK sales of the current model were up 30% year on year in 2017.

It feels odd comparing this

It feels odd comparing this to a Defender or Land Cruiser 70, when its really a Range Rover rival, but with retro styling...

Besides I never seen ordinary G wagens, just the pimped up AMG versions!

Is a brick is a brick. The most stupid gas guzzling uncomfortable load of junk produced

Class of its own

Trying to compare the G-wagen to a Land Rover/Range Rover or anything else is rather pointless. It's in a class of its own and there really isn't anything on sale that has the same set of USPs.

This updated model takes all that was iconic about the original and brings it into the 21st century. It may still not have the most luxurious ride, the rear legroom might not be quite as much as XYZ and the boot may not be cavernous but that's not the point of owning one.

I know a lot of people just don't understand the appeal but for those of us that do, it will never come down comparing a list of features with other vehicles because you either want a G-wagen in your garage or you don't.