Mercedes-Benz has previewed a new Mercedes-Benz G-Class-inspired rugged compact SUV at the Shanghai motor show with its Concept GLB.

Scheduled to go into production later this year, with five or seven seats, the GLB features a boxy off-road design and variable four-wheel drive that Mercedes hopes will combine to give the car some Land Rover Defender-style cachet as one of its more distinctive models. The GLB will serve as a rugged rival to the Land Rover Discovery Sport, BMW X1 and Audi Q3.

As well as being offered with petrol and diesel engines, by 2021 the GLB will be available as an electric variant, dubbed the EQB. 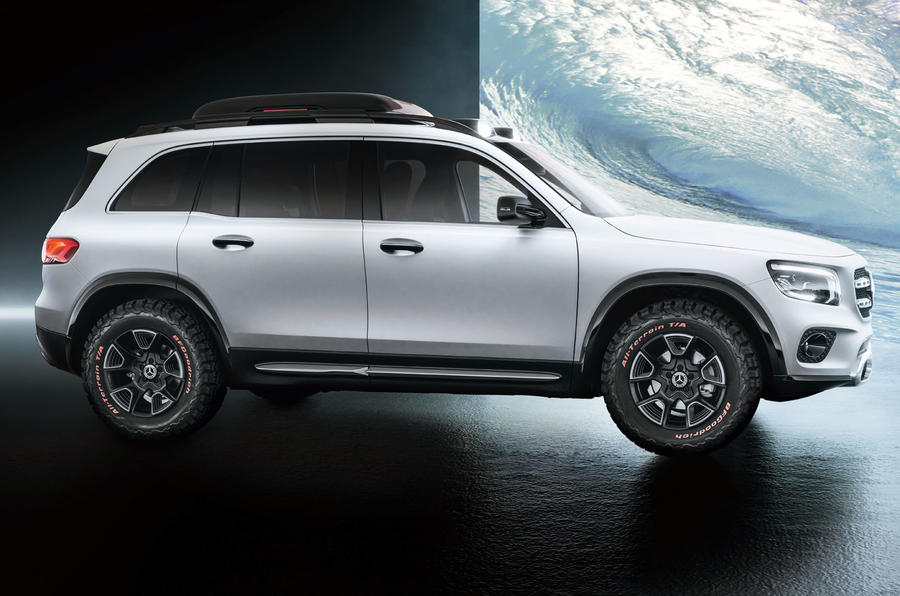 The new SUV is described by Mercedes as offering class-leading levels of versatility, and will be positioned between the upcoming second-generation Mercedes-Benz GLA and the recently facelifted Mercedes-Benz GLC. The GLB follows the Mercedes-Benz A-Class hatchback and saloon, China-only long-wheelbase A-Class Saloon, Mercedes-Benz B-Class, Mercedes-Benz CLA, CLA Shooting Brake and GLA as the eighth model to be based on the firm’s MFA architecture.

“We asked ourselves whether there is space between the GLA and GLC,” said Britta Seeger, Mercedes-Benz board member responsible for sales. “The GLB is the answer to this question: a durable and practical SUV with nonetheless compact dimensions.”

The Shanghai concept is said to provide a close preview of the production version of the GLB, although a number of styling elements have been added to the exterior in a bid to provide it with a more rugged and upmarket appearance than that of its forthcoming showroom sibling. Among the concept car flourishes are widened wheel-arch cladding, reworked sills, additional lights incorporated into its glass roof and a cargo box nestled within its roof bars. 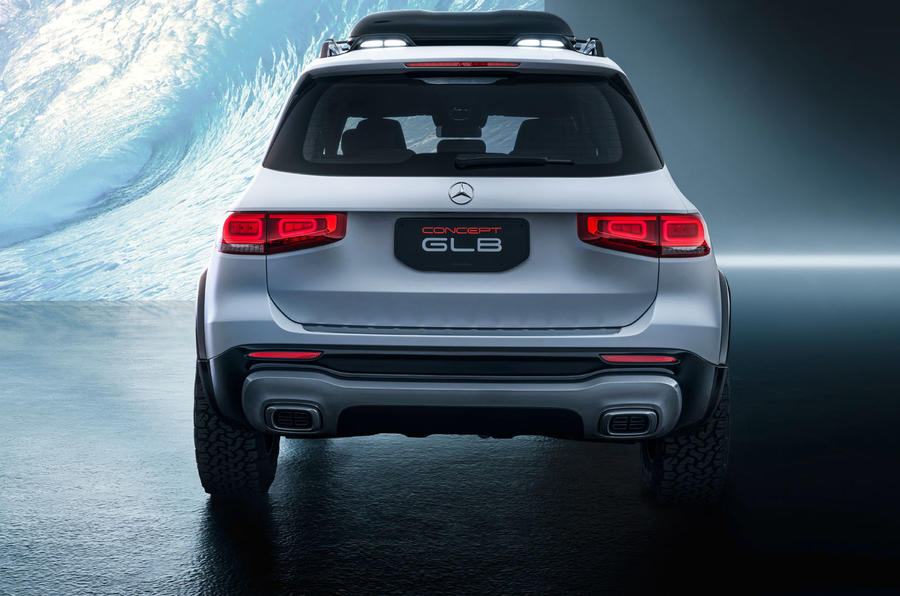 The Concept GLB receives a luxurious interior swathed in a combination of nappa and nubuck leathers, walnut trim and elements milled from solid aluminium. Predictably, the production version of the new SUV will be less opulent, although the basic layout will remain unchanged.

“As with the exterior, we’ve taken some liberty with the concept to provide a more luxurious feel,” said Mercedes-Benz interior design boss Hartmut Sinkwitz. “But it is based on the production version of the GLB.”

The dashboard features the same configurable digital instruments and infotainment panel as found in the GLB’s platform-sharing relatives. The GLB also features a uniquely styled centre console between the two front seats. With the gearlever mounted on the steering column, the console accommodates a touchpad and a large oddment bin housing a pair of cupholders.

In a move it claims will see it appeal to family car buyers who may have otherwise opted for an MPV, Mercedes-Benz has developed the GLB with both a standard five-seat and optional seven-seat layout. 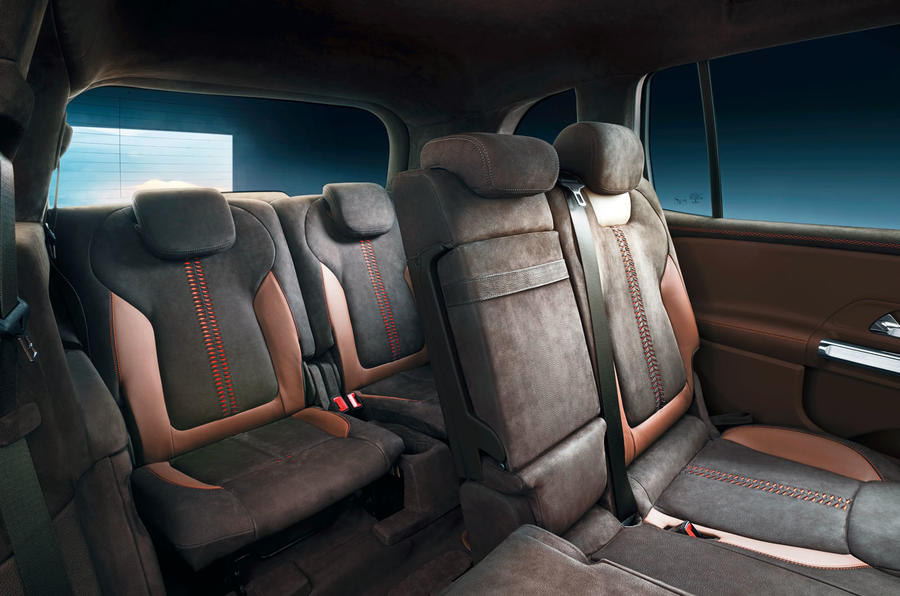 To ease access to the third seat row, the outer seats within the second row receive a so-called easy-entry function, which allows the backrest to fold down and the entire seat to be pushed forward. Up to four child seats can be accommodated in the second and third rows.

Hinting at the top engine planned to be offered in the standard GLB line-up, the Concept GLB receives a turbocharged M264 2.0-litre four-cylinder petrol engine. The transversely mounted unit, which uses a two-stage variable valve timing system among other efficiency-boosting measures, develops 221bhp and 258lb ft and is set to power the initial range-topping GLB 250. Other engines, including diesels, will be available when sales commence, including an even more potent version of the M264 producing 302bhp and 295lb ft and set to appear in the AMG-badged GLB 35. 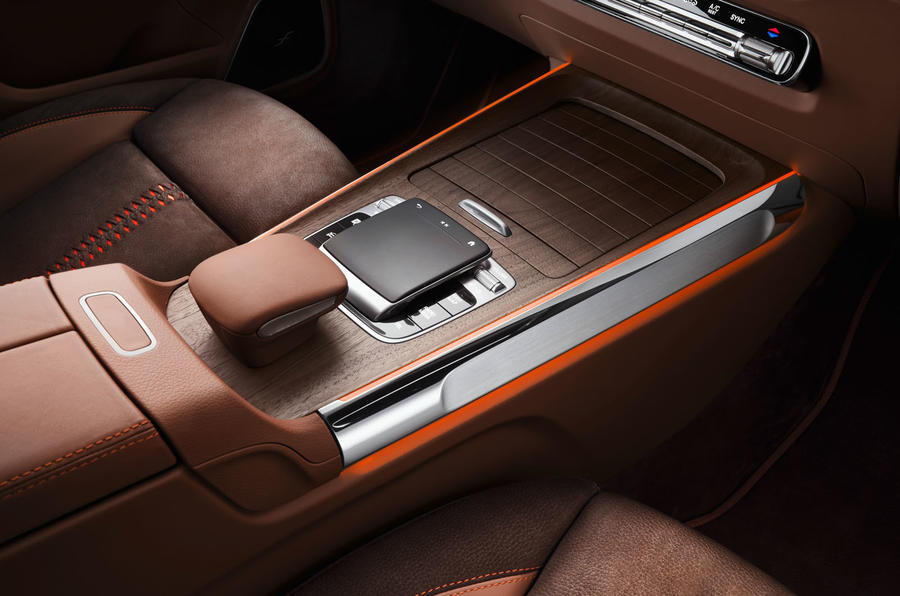 Each drive mode apportions a different distribution of torque between the front and rear axles. The Standard mode is 50:50 front to rear, in Eco/Comfort mode it alters to 80:20 and in Sport it becomes more rear wheel-biased, at 70:30.

The GLB’s engine range at launch is set to be petrol- and diesel-based, but Mercedes’ commitment to launch over 130 electrified models before 2023 means a fully electric version will appear within the next couple of years.

Fitting into the maker’s EQ sub-brand and due to be dubbed EQB, the electric SUV will sit below the recently launched EQC and feature a similar, aerodynamically optimised redesign including a bespoke front end.

The EQB will use the EV driveline from the upcoming EQA hatchback, using two electric motors, with one mounted at the front and one at the rear, to power both axles. Insiders suggest the EQA will use a battery of at least 60kWh in capacity, giving a claimed range of around 310 miles. 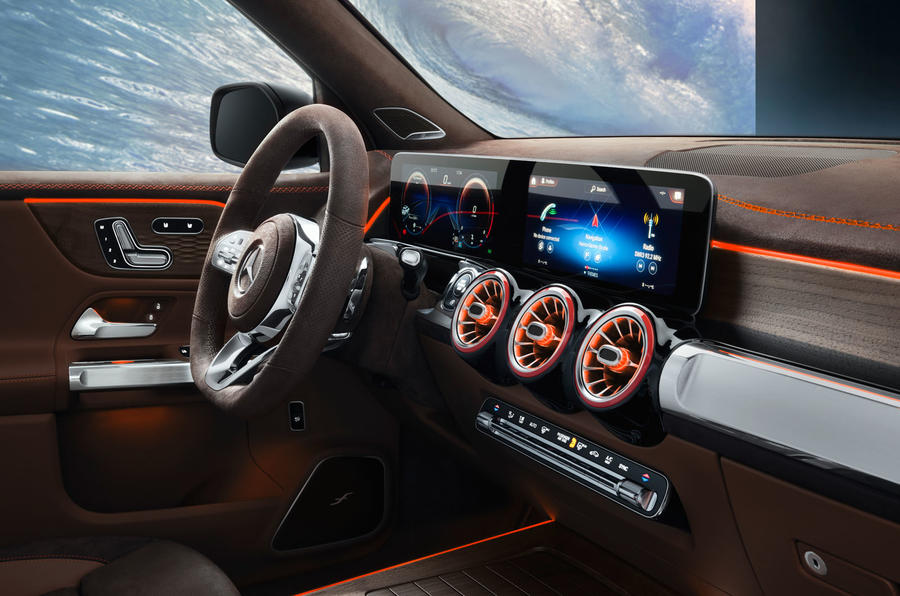 Expect slightly less for the EQB given its extra weight and higher-drag body, although a larger battery variant could be offered given the additional floor space. An 800V electrical system is expected for both models, providing rapid charging capability.

Before the EQB arrives, Mercedes-Benz will provide a halfway-house hybrid GLB using a plug-in petrol-electric system. A 2.0-litre four-cylinder petrol engine and gearbox-mounted electric motor powers the front wheels, with a second electric motor within a ZF-produced rear axle assembly driving the rear wheels. A lithium ion battery promises an electric range of up to 62 miles.

Pricing remains undisclosed, but the base GLB is expected to cost around £31,000 when UK sales get under way later this year following the official unveiling of the production model at the Frankfurt motor show in September.

Visually, the GLB is like nothing else in Mercedes-Benz’s line-up right now. What’s the message behind its design?

“When we first sat down to discuss the design of the GLB, there was a very strong desire to incorporate some of the design DNA from the G-Class, and the concept reflects this. Practicality was a big consideration right from the beginning. We also wanted it to look robust, like a real off-roader. It doesn’t look that big from the outside, but its sheer sides and upright cabin deliver exceptional roominess inside.” 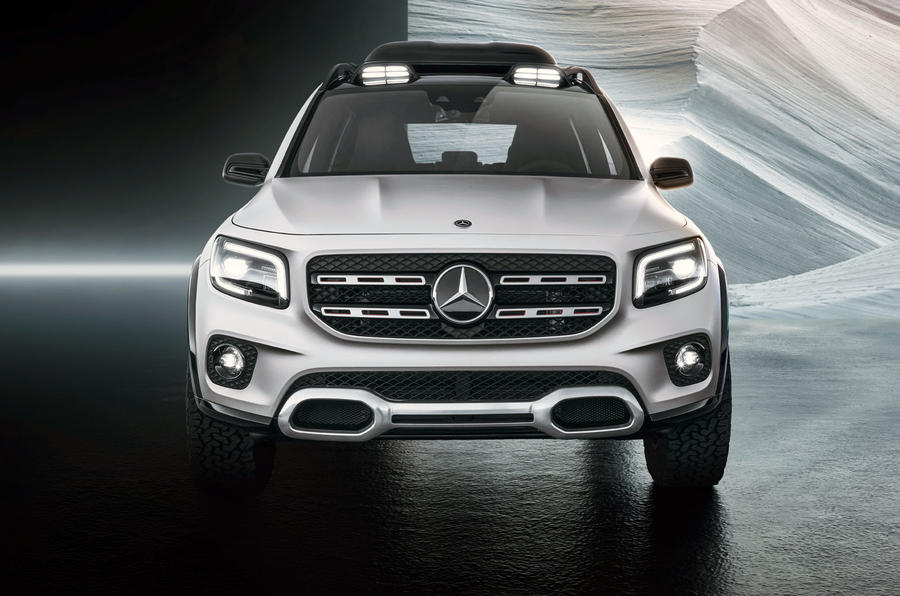 Is it the largest model in Mercedes-Benz’s compact car line-up?

“Yes, it is positioned between the GLA and the GLC. We took the longest wheelbase on offer to deliver the largest possible interior we could. One key advantage over the competition is the GLB’s ability to seat up to seven. It’s a bit like a Swiss army knife: it incorporates the right solutions for every situation.”

How close is the Concept GLB to the production model?

“Very close. We’ve used the production body and many of the details from the production version in the concept, but we’ve added some traditional off-road-inspired touches to give it the character of a true SUV. It is 30mm wider overall, but only because the cladding within the wheelhouses has been altered to house the off-road wheels and tyres. The production version is a little less bold, but not far removed.” 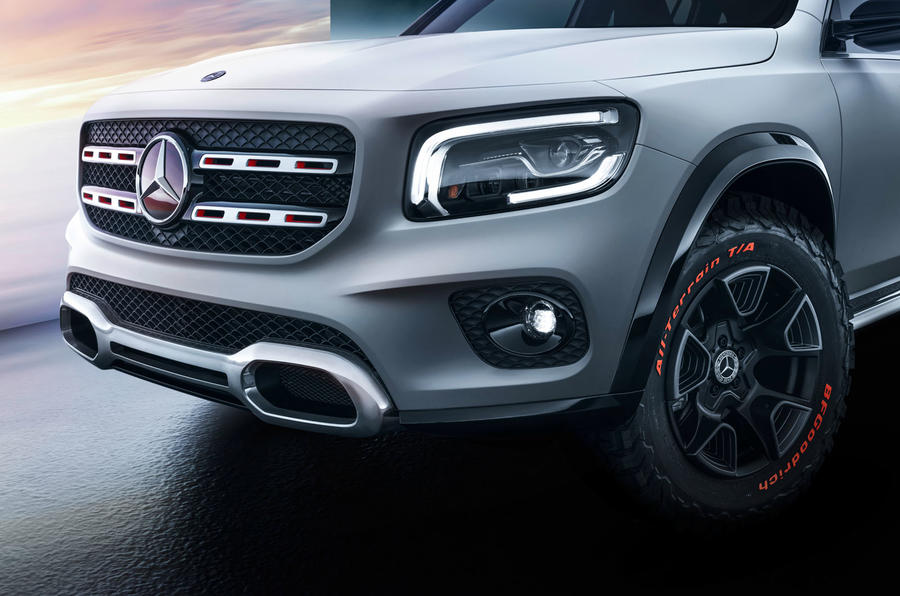 Will prospective buyers be able to option the production version of the GLB to resemble the concept?

“We are discussing this. Originally there was no plan. But we have off-road packages on other Mercedes-Benz SUV models, so there could be scope to do something. Personally, I think it would be a good idea. Personalisation is becoming increasingly important. But I drive a G-Class, so I’m biased.”

This isn't that much shorter than the GLC...

Not sure this is a true Q3 competitor. This GLB isn't that much shorter than the GLC if the dimensions are to be believed (how else do you squash in seven seats I suppose)... which will inevitably mean that the next-generation GLC will [have to] increase in size and price to realistically make room for it. I guess the next Gen Q3 will balloon accordingly...

It is a Mercedes so it will find buyers

Why did it have to be so fugly?