BACK TO ALL NEWS
Currently reading: Mercedes-AMG will make PHEV debut with 800bhp-plus GT73e
UP NEXT
BMW opens door to M1-inspired electric supercar

The new Mercedes-AMG GT73e 4Matic+ EQ Power+ 4-Door Coupé will pack “more than 800bhp” in a bid to position it at the top of the four-door sports car ranks when it hits UK showrooms this year.

The range-topping performance saloon will be the first in a series of new plug-in hybrid Mercedes-AMG models to feature what is known within the firm as a “P3 plug-in hybrid” system, which should enable the GT73e to cover 0-62mph in less than 3.0sec and exceed 200mph. The new flagship model will rival the Porsche Panamera Turbo S E-Hybrid and command a premium over the current, non-electrified GT63 – with prices likely to start upwards of £150,000.

As well as representing the beginning of a new electrified era for AMG, the GT73e could also serve as a spiritual successor to the company’s debut model: the outlandish 300CE Hammer super-saloon, which cemented AMG’s reputation for endowing big saloons with supercar pace.

The GT73e’s new P3 plug-in hybrid system uses an electric motor integrated into the rear axle to provide what is described as a “significant” performance boost to the petrol engine, a mildly updated version of the GT63’s twin-turbocharged 4.0-litre V8, combined with a fully variable four-wheel drive system.

In addition to the GT73e, the P3 PHEV system is set to be used by new 73-badged versions of the latest S-Class and upcoming SL grand tourer. It will also underpin the petrol-electric successor to the C63 4Matic, although, as first reported by Autocar, it will be used in combination with a turbocharged 2.0-litre four-cylinder engine, rather than a large-capacity V8.

The P3 PHEV layout will initially be reserved exclusively for Mercedes-AMG models. All existing PHEVs from parent company Mercedes-Benz use the P2 PHEV system, which sites the electric motor within the gearbox housing – a layout also used on the Panamera Turbo S E-Hybrid.

The new GT73e’s P3 PHEV system provides scope for a larger electric motor than is possible within the packaging constraints of the P2 system, offering direct drive to the rear wheels in pure-electric mode and enhanced torque vectoring in hybrid mode. 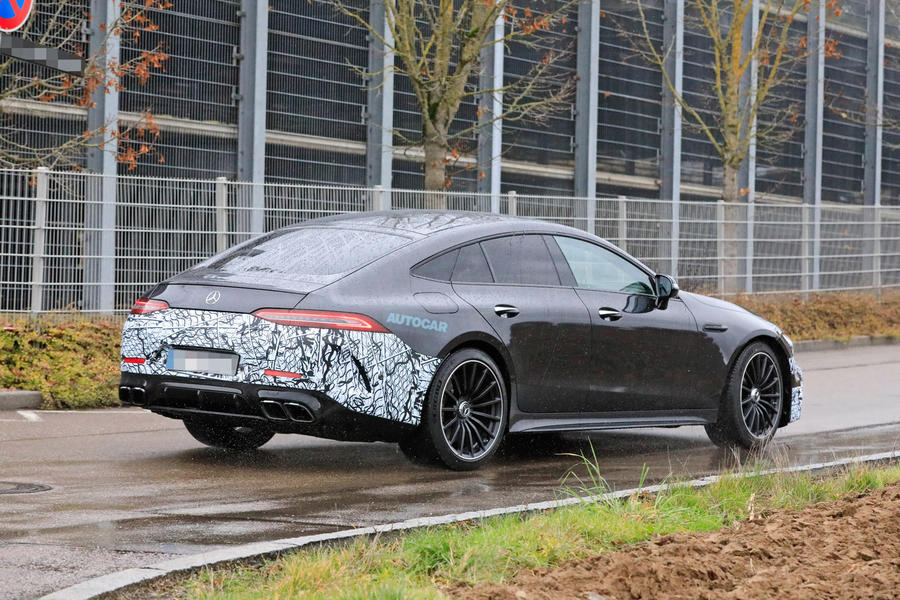 Additionally, this means the electric motor’s torque is not capped by the limitations of the gearbox. It also provides the basis for improved front-to-rear weight distribution and allows significantly more efficient energy recuperation as there are no mechanical losses from the gearbox. Kinetic electricity harvested during braking and periods of trailing throttle is fed straight back into the battery.

AMG sources have revealed to Autocar that the GT73e’s electric motor will have up to 201bhp and 268lb ft. Reports suggest it shares key parts with the ZF-produced ‘M0’ asynchronous electric motor used in the pure-electric Mercedes-Benz EQC and EQV.

The motor’s reserves are combined with the GT73e’s petrol engine, which in its GT63 S 4-Door Coupé tune kicks out 639bhp and 664lb ft, to deliver what Autocar has been told are “previously unattained levels of power and torque” for a road-going four-door AMG model.

The new four-door will “at least match” the 805bhp promised by AMG when it first revealed plans for a petrol-electric drivetrain with the unveiling of the GT concept in 2017. This would provide the GT73e with over 130bhp more than its hybridised Panamera rival, which packs a combined 671bhp from its electrified V8.

Total torque output should be impressive, too, extending to somewhere in the region of 740lb ft. The high overall torque load is made possible because the torque from the electric motor is not restricted by the gearbox and four-wheel drive system. Instead, it is fed directly to the rear wheels.

The four-wheel-drive GT73e won’t be AMG’s most powerful road-going model, though. That honour goes to the delayed One hypercar, which is motivated by a Formula 1-derived electrified V6 with over 1000bhp and 1000lb ft.

Electrical energy for the P3’s rear-mounted motor is supplied by a liquid-cooled lithium ion battery pack under the floor of the GT73e’s boot. Its capacity and chemical process remain under wraps less than six months before the new model’s planned unveiling, but insiders suggest it will use the same cells as the newly unveiled plug-in hybrid version of the fifth-generation C-Class.

Despite a substantial increase in kerb weight from the use of an electric motor and battery, the GT73e promises to crack 0-62mph in under 3.0sec, undercutting the GT63’s claimed 3.2sec sprint time.

The added performance will be combined with an ability to run on electric power only. Exact figures have not yet been made official, but recent plug-in hybrid Mercedes models have offered ranges of up to 62 miles from batteries of between 25.4kWh and 31.2kWh in capacity, as well as DC charging compatibility. 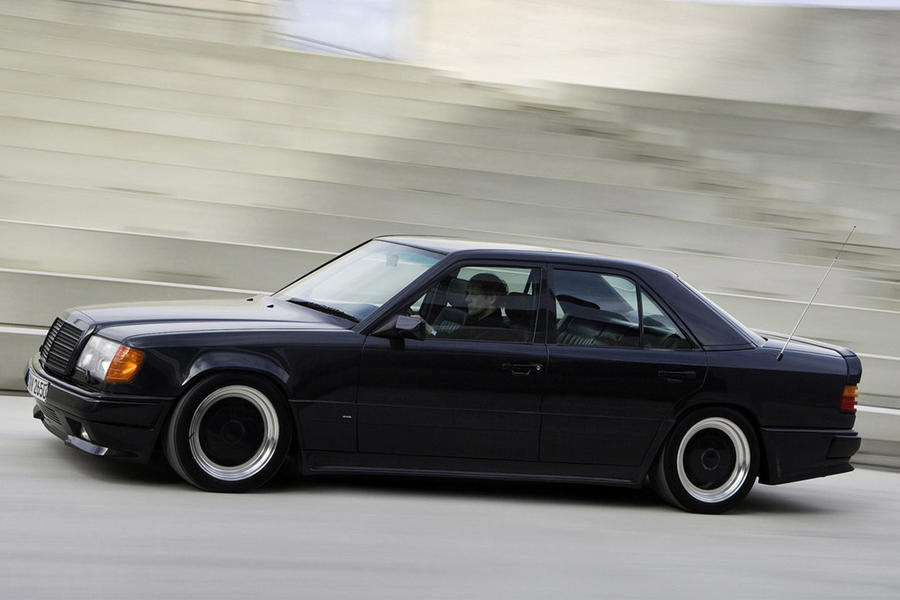 However, the legend wasn’t complete until Mercedes-Benz began offering a second output option, which upsized the M117 to 6.0 litres, with power increasing to 385bhp. The engine modifications were overseen by Erhard Melcher – the ‘M’ in ‘AMG’, and one of the performance division’s original founders. Key changes included a new four-valve cylinder head (in place of the standard two-valve set-up), reworked camshafts and lighter pistons.

The 300CE Hammer was renowned more for its segment-leading torque output than outright power, and at 417lb ft it was prodigious for performance cars of the time, helping to provide the model with a 0-62mph time of 4.8sec and 190mph top speed.

There were also minor upgrades to the interior, most notably Recaro front seats and a sports steering wheel. At the top of the range, there was also a Breitcoupe (wide-body) styling option, of which just 12 examples are claimed to have been built.

Never thought I would say it but is the day coming where legislation will cap performance/power of these cars?  The YouTube obsession with drag races / quarter miles is drawing every in like cock fights. Tesla started is as a differentiator and Merc and BM are now full on with the same race. I will say it .... an 800ps exec saloon is pointless. If you use it on the road it will be dangerous very quickly.

Coming up on ten years after the all wheel drive, 4 motor, fully torque vectoring eSLS now and here we have yet another weak plug in.  Very disappointing from AMG.  Precisely why I sold my 3rd 63 two years ago and bought a Model S.

Coming up on ten years after the all wheel drive, 4 motor, fully torque vectoring eSLS now and here we have yet another weak plug in.  Very disappointing from AMG.  Precisely why I sold my 3rd 63 two years ago and bought a Model S.

Happy for you that found your level. If you can't notice the difference, why pay for it?