BACK TO ALL NEWS
Currently reading: New Mercedes-Benz Vision EQS concept is 470bhp luxury EV
UP NEXT
New Porsche Taycan Sport Turismo on sale from £73,560

Mercedes-Benz has previewed its upcoming EQS luxury saloon with the unveiling of a new 470bhp electric-powered concept at the Frankfurt motor show.

Called the Vision EQS, the new four-door provides a foretaste of what Mercedes-Benz claims will be its most advanced production model yet when it reaches showrooms in 2021. It will be launched as a direct rival to the next-generation pure-electric Jaguar XJ, as well as the Tesla Model S and Audi E-tron GT.

As such, Mercedes design director Gorden Wagoner says the EQS will attract new customers to the brand, rather than cannibalising sales from existing S-Class buyers. "The key for EQ cars is then to develop cleanliness for a technical, digital look. It is quite free-form but still very sexy, almost like the best operating systems," he said. "You must remember that majority of buyers will not be S-Class customers making the switch, but people who are entirely new to the brand.

"The electric architecture gives very different proportions to work with, so it is a very different approach. On the exterior, we call it a one-bow design. It is almost coupe-like, a bit cab forward and quite clearly a very different proposition to the S-Class. The reason for that is that the battery pack sits the car about 15cm higher than an ICE car, and the best way to create that is with the bow - and in fact it actually looks lower as a result." 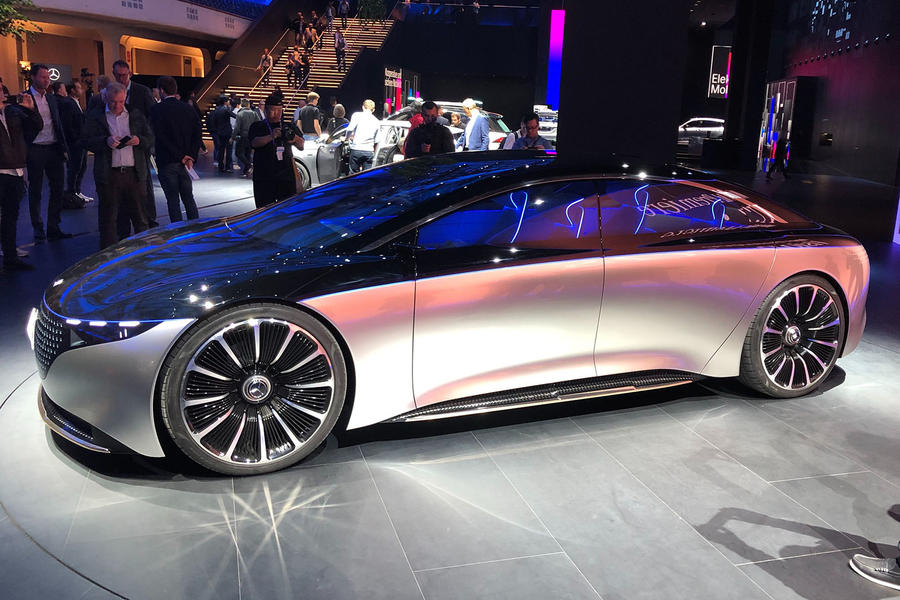 The EQS is set to be sold alongside the seventh-generation S-Class and will act as a high-tech figurehead for an extended range of models from Mercedes-Benz’s newly created EQ electric car sub-brand. It follows the EQC, EQA and EQB as Mercedes-Benz’s fourth all-electric model but is the first to feature a dedicated steel, aluminium and carbonfibre platform, dubbed MEA internally. The EQS also forms the basis of an even more luxurious Maybach model that is intended to take on an upcoming EV being developed by Rolls-Royce.

Mercedes-Benz chairman Ola Källenius said: “By 2022, we will have launched a total of more than 10 purely electrically driven vehicles. Over and above this, we shall electrify the entire Mercedes-Benz portfolio and thus offer our customers at least one electrified alternative in every Mercedes-Benz model series – over 50 in all.”

Powered by two electric motors spread across both axles for four-wheel drive, the Vision EQS has a combined output of around 470bhp and 560lb ft of torque. This is sufficient to allow the car to accelerate from a standstill to 62mph in a claimed 4.5sec and reach a top speed of more than 124mph.

The two electric motors are able to send power to each individual wheel via a torque-vectoring set-up that is claimed to provide unparalleled levels of traction and handling prowess in the upper-luxury segment. 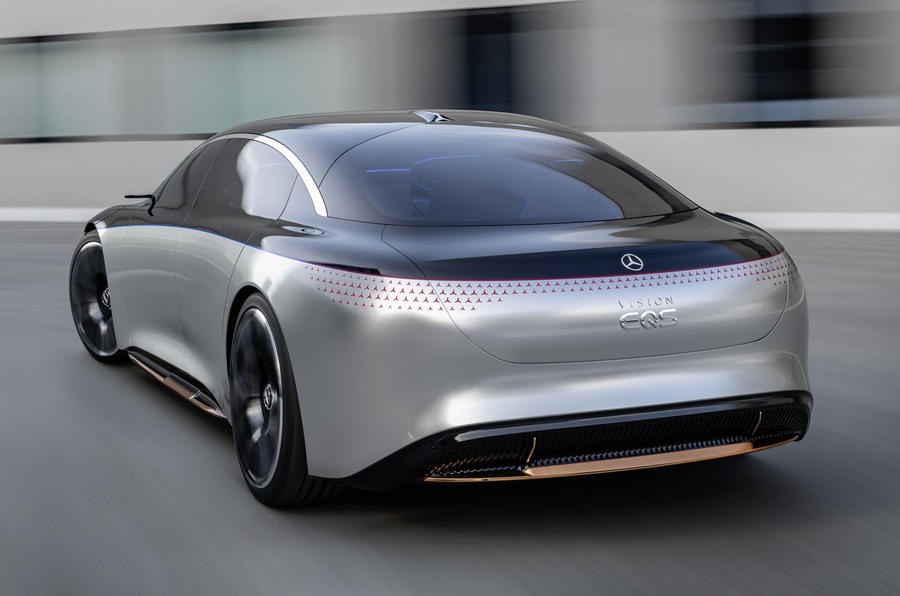 The MEA platform is said to be capable of containing a battery pack of up to 100kWh in size. The lithium ion battery from Mercedes-Benz sibling company Accumotive is claimed to provide the saloon with a range of over 435 miles – 158 miles more than the EQC.

Mercedes-Benz has developed the EQS to support 350kW charging – a standard first achieved by Porsche with its Taycan. On such a system, Mercedes-Benz claims the battery can be charged to 80% in just 20 minutes.

Thanks to the new electric platform, the Vision EQS is able to have different proportions from a traditional saloon’s. The bonnet is shorter, with the windscreen set well forward, and the rear end is quite low by today’s standards. The roofline, meanwhile, is similar in shape to that gracing the third-generation CLS.

With the battery housed completely within the floorpan of the MEA platform, it is said to have an exceptionally low centre of gravity, as well as advanced air suspension featuring active body control and anti-lean to boost the car’s dynamic appeal. 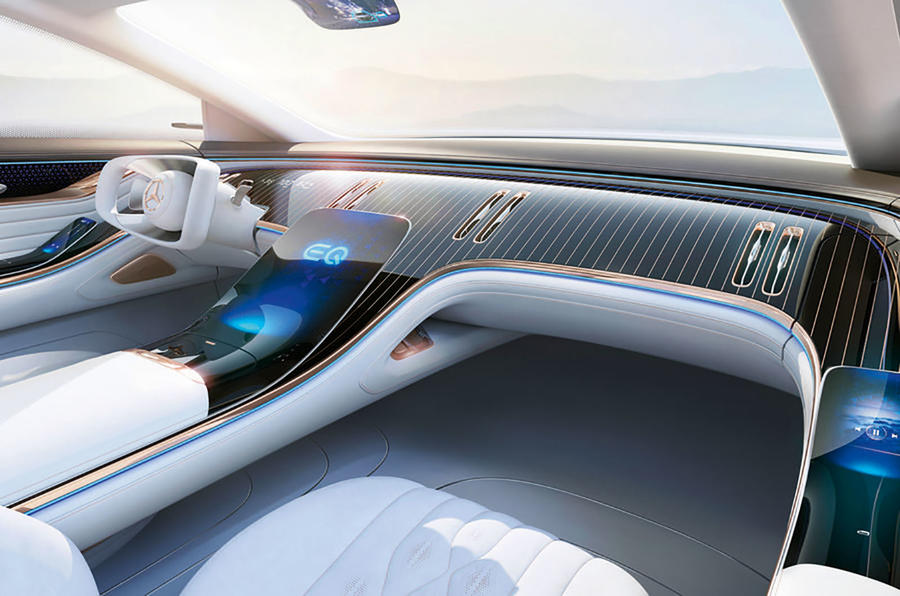 Stylistically, the Vision EQS follows the lead of the EQC with an exterior that has fuller forms and smoother surfacing than those of current combustion-engined models. To inject it with some extra visual pizzazz, the new concept receives a two-tone paint scheme as well as an LED light band along the shoulder of each side.

Bookmarking the black panel grille are Mercedes-Benz’s Digital Light headlights – each featuring two holographic lens modules that enable it to project signals onto the road to improve safety for pedestrians.

The rear end of the car is dominated by a further light band made up of 229 individual illuminated three-pointed stars. All up, the new Mercedes-Benz concept has some 940 individual LEDs.

The EQS also features a newly styled cabin inspired by luxury yachts. The flowing forms of the dashboard are said to mirror the look already chosen for the production version of the new luxury saloon. Also on board is a future iteration of the firm’s latest MBUX operating system, which works in combination with a large digital panel housing the instruments and infotainment functions.

As well as revealing the design ideas set to be incorporated in its production sibling, the concept’s interior also showcases a number of recyclable materials being considered for use in future Mercedes-Benz models. These include composite materials made from recycled PET bottles and plastic ocean waste as well as a faux leather material that is claimed to closely resemble the properties of nappa leather.

I really like it, makes the Taycan look like a dull and unimaginative Tesla update.  But I do wonder what will make it to production.

This stunning Mercedes, the Taycan's instant *and repeatable* acceleration, the ID 3's 341 mile range, and all of a sudden Tesla seems so Betamax in a VHS world...

Wow, a recent Mercedes that

Wow, a recent Mercedes that actually looks good. Such a rare event.

The interpretation of the signature Mercedes EV front is more successful in this EQS than in other models but it's still a weak design.

Otherwise I like the fluidity of the form, the one-piece roof where pillars are visually absent, the Mayback-like two-tone bodywork also works well here in separating the car into lower & upper parts.