BACK TO ALL NEWS
Currently reading: Mercedes-AMG G63: 577bhp super-SUV starts from £143,305
UP NEXT
2021 Mini Electric set to gain styling tweaks, new infotainment

Mercedes-AMG has confirmed that its new G63 will be priced from £143,305, making it £7355 more expensive than the old car - although it does come with a new and more powerful V8 nestled into the front of a heavily revised structure.

Due on roads in July, the new top G-Class raises the already potent performance potential of its predecessor to new heights. It is capable of accelerating to 62mph in just 4.5sec and reaching a top speed of 149mph.

The heavily revised 2018 G63 aims to build on the largely unique qualities of its boxy predecessor with the adoption of a contemporary aluminium body shell and widened ladder frame chassis. They provide the new model with an added 210mm of width and what Mercedes-AMG describes as greater comfort and stability.

Further developments for the range-topping G-Class model include a new V8 engine and nine-speed automatic gearbox. They are combined with a newly conceived AMG Performance 4Matic four-wheel drive system, providing a more rearward biased delivery of power, and reworked suspension. Together they are claimed to provide the G63 with straight-line performance to out-accelerate the Range Rover Sport SVR, although not beat its top speed. 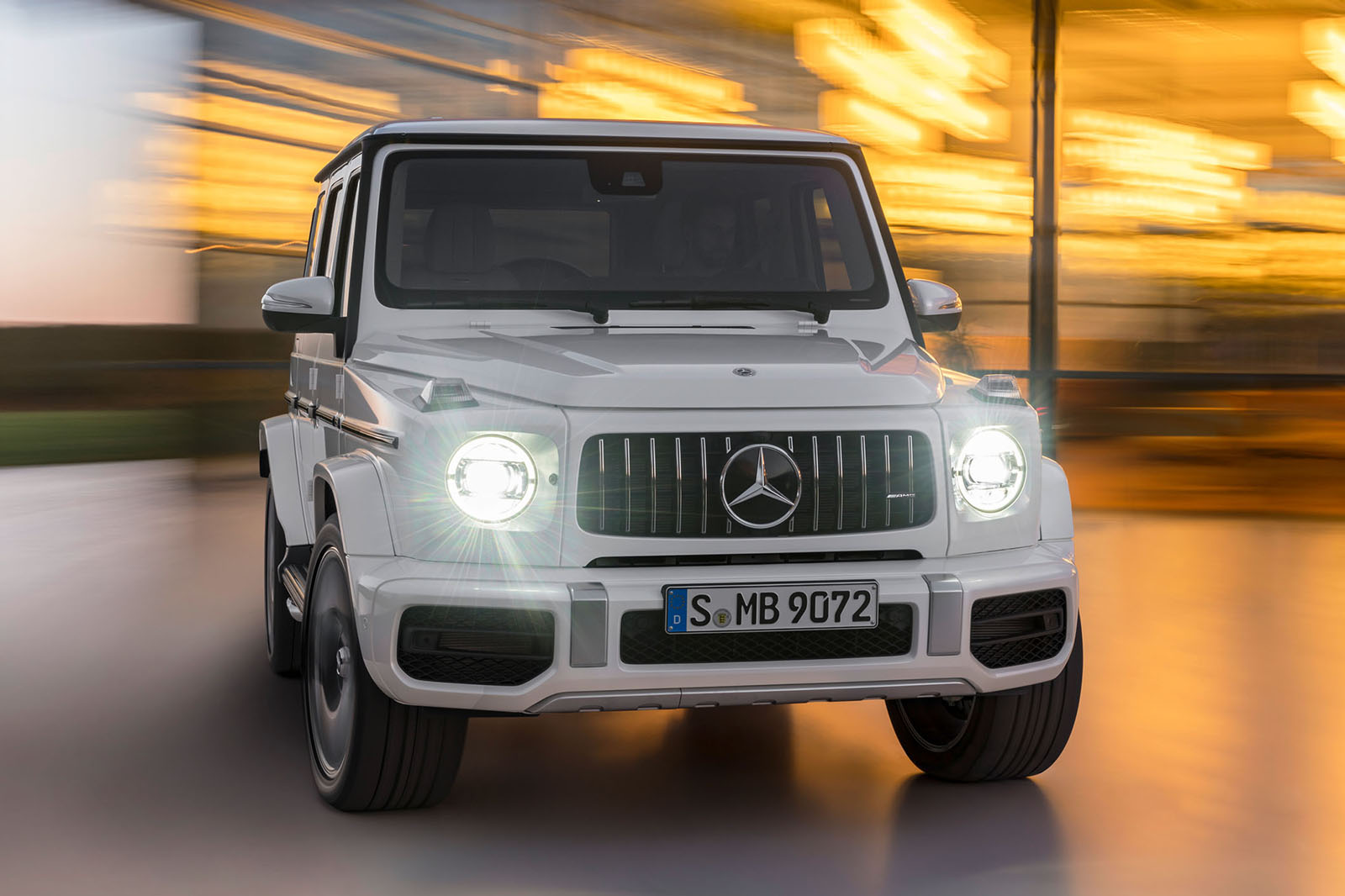 Power for the new G63 comes from AMG’s M178 engine, as used across the Mercedes-Benz performance car division’s range. The 4.0-litre V8 petrol unit, which sites its two twin-scroll turbochargers within its cylinder banks to provide compact packaging and optimal thermal properties, replaces the old twin-turbocharged 5.5-litre V8 used by the old G63, the M157 as it is codenamed internally.

The increased reserves are channelled through a nine-speed AMG Speedshift TCT automatic gearbox and an AMG Performance 4Matic four-wheel drive system that now apportions drive in a 40:60 front-to-rear split instead of the 50:50 front-to-rear-split of the previous G63. 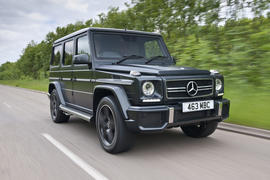 Despite a kerb weight of 2485kg, Mercedes-AMG claims the new G63 accelerates to 62mph some 0.9sec quicker than its predecessor at just 4.5sec. Its nominal top speed has also risen by 6mph to a limited 137mph. However, buyers can also specify a so-called driver’s package that brings upgraded wheels and tyres and a limited 149mph top speed. 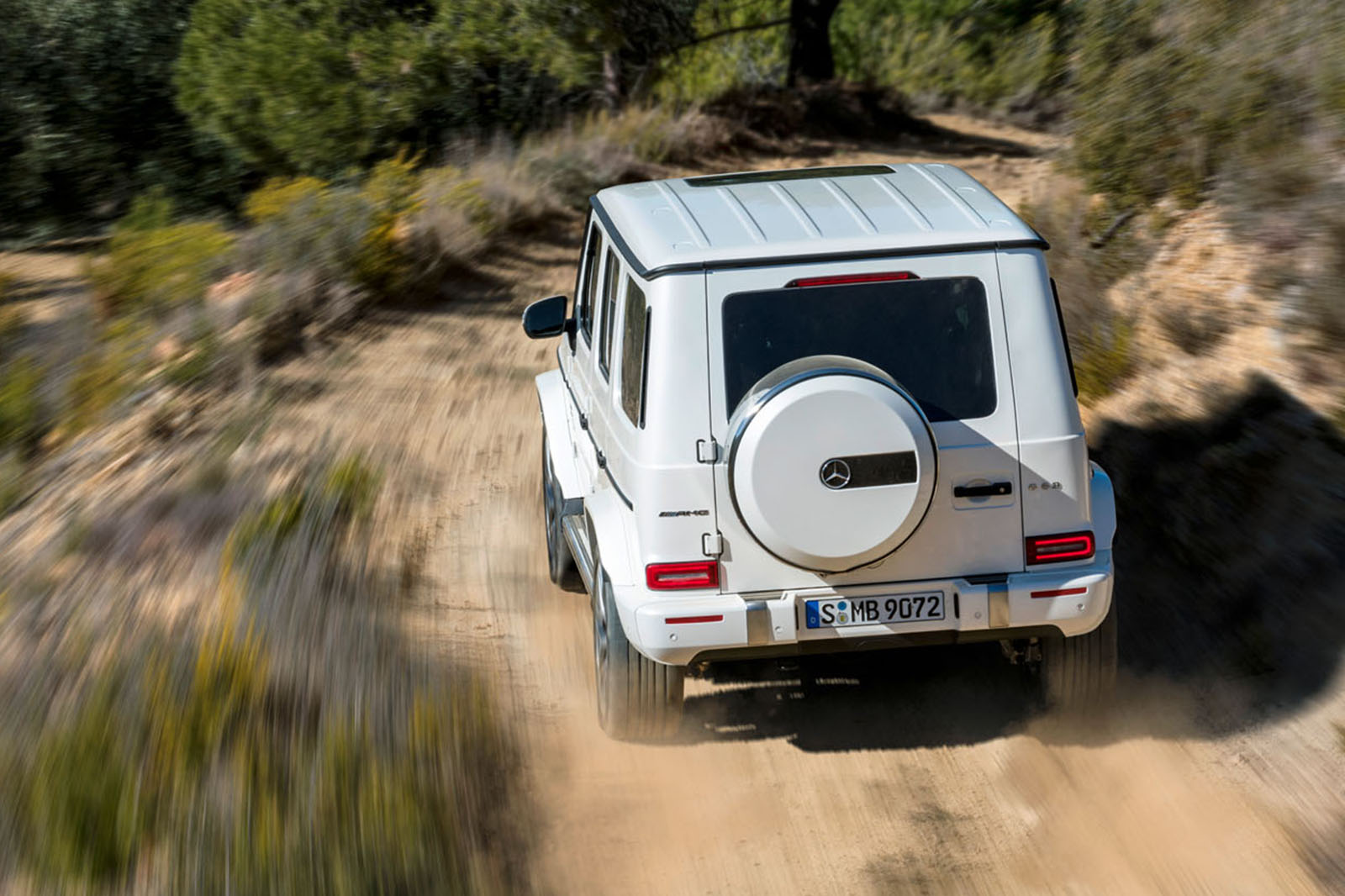 As well as the boost in performance, the new engine is claimed to provide the new G63 added economy with a combined cycle figure of 21.4mpg and average CO2 emissions of 299g/km on the European test cycle. The old model boasted a claimed 20.5mpg and 322g/km.

The new range-topping G-Class model is underpinned by a heavily reworked suspension that departs radically from that used by its predecessor. It uses a new double wishbone design at the front and a revised multi-link arrangement boasting rear spring travel of 82mm under compression and 142mm in rebound along with a ground clearance of 241mm for the rear axle.

Setting the 2018-model-year G63 apart visually from the new G500 revealed at the Detroit motor show in January are a number of typical AMG design cues, including a unique grille with 12 vertical elements and a deeper front bumper featuring a matt silver kick plate.

As with the G500, the standard LED headlamps can be upgraded with optional Multibeam units with 84 individual LED modules and Mercedes's Adaptive Highbeam Assist function.

There is 'V8 Biturbo' letting within the front wings, widened wheel arches, red-painted brake calipers, standard-fit 21in wheels, a running board and, in a continuation of the set-up used by its predecessor, side mounted exhaust pipes that exit beneath the rear door.

The rear end receives an AMG specific bumper with the same matt silver elements as at up front together with a stainless steel cover for the spare wheel and 'AMG G63' badges. 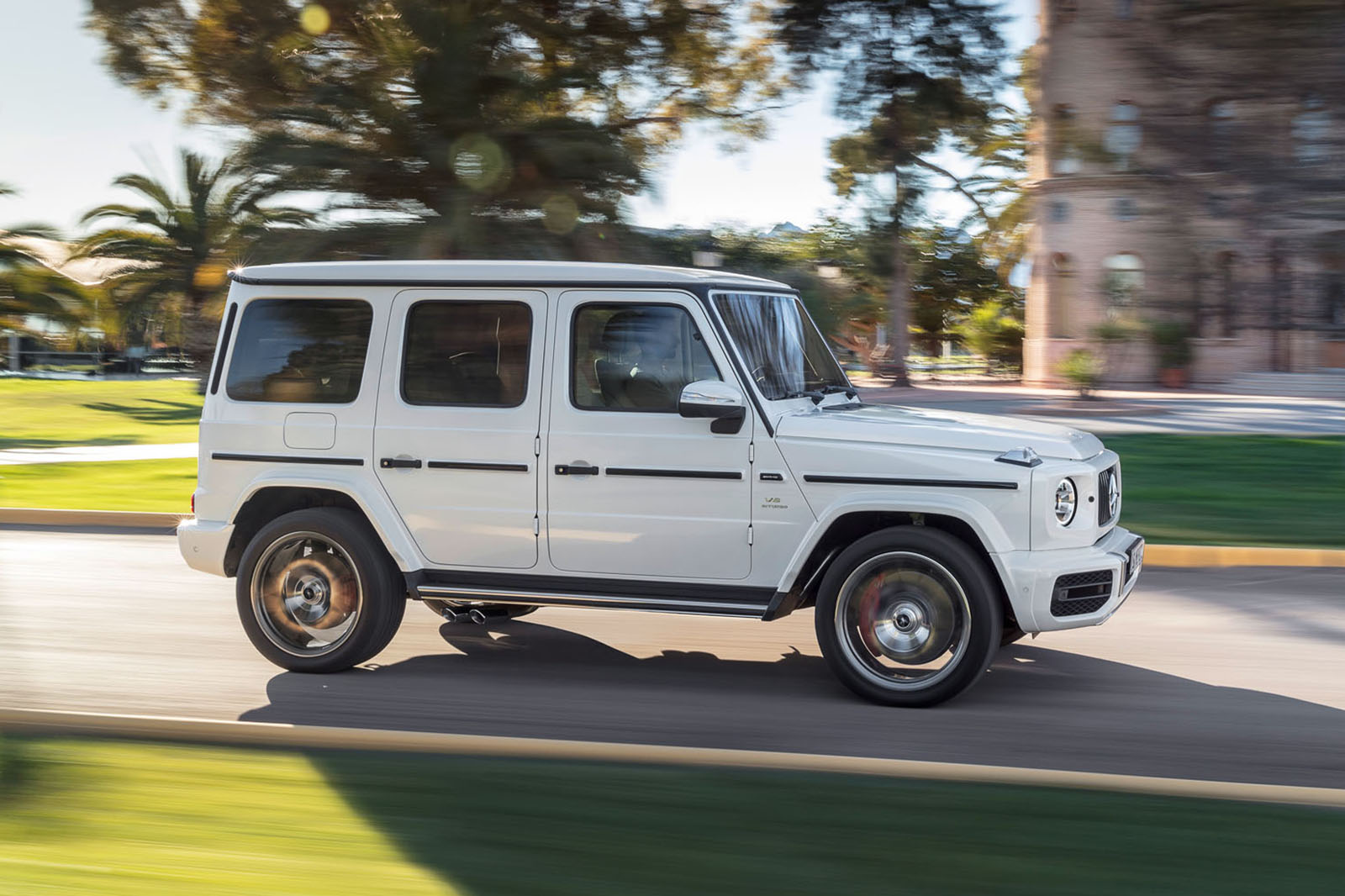 Among the exterior options is an AMG Night package with dark tinted headlamps, tail lamps, indicator lenses, rear window and rear side windows.

Boasting a similar 20mm increase in width as the G500, the interior of the new G63 offers an added 150mm of rear legroom as its predecessor.

Housed within a newly designed dashboard is Mercedes-Benz’s Widescreen Cockpit. It comes with standard analogue instruments but can be ordered with digital instruments in combination with a 12.3in infotainment display. The new AMG model also receives redesigned front seats and a new rear bench that can be folded down to extend boot capacity.

As is now tradition at AMG, the new G63 will be launched with a limited-volume 'Edition 1' model featuring a range of exclusive exterior colours, side stripes and black 22in forged aluminium wheels together with an updated interior with sport seats in black and red leather, carbonfibre trim element and a flat-bottomed AMG Performance steering wheel.

And thats from a G-Wagen fan.

It was 2012, the year those tacky LED strips beneath the headlights were introduced, that it all started going downhill, rapidly spreading to gaping vents, matt paint, massive and/or black wheels and so on. Also as a fan, it's sad to see what's become of it.

so what about the useless 0-60

Dacia looks are catching on?

oh no a £11,000 Dacia exterior would look classier

Quite right, Mercedes interiors are getting really tacky.

Good Lord. Imagine the gale that will be blowing around this thing at 150mph. Speak up because the wind roar will be considerable.

The AMG Wagon is ridiculous really but curiously desirable.

I guess there a market for it, otherwise it’s got all the appeal of a Banana...!

It looks even more like a big Tonka Toy than the original. What blind manager signed off on this one at AMG? The front grille is dreadful.

Accelerates Faster than an SVR??