BACK TO ALL NEWS
Currently reading: Mazda plans straight-six Skyactiv-X petrol and diesel engines
UP NEXT
2022 Audi E-tron set for major upgrade

Mazda is lining up a range of compression ignition straight-six engines, both petrol and diesel, as part of its anti-downsizing initiative.

The plans were revealed in a financial year results report, compiled last month and published on Mazda’s global site before apparently being removed after media outlets spotted the plans. 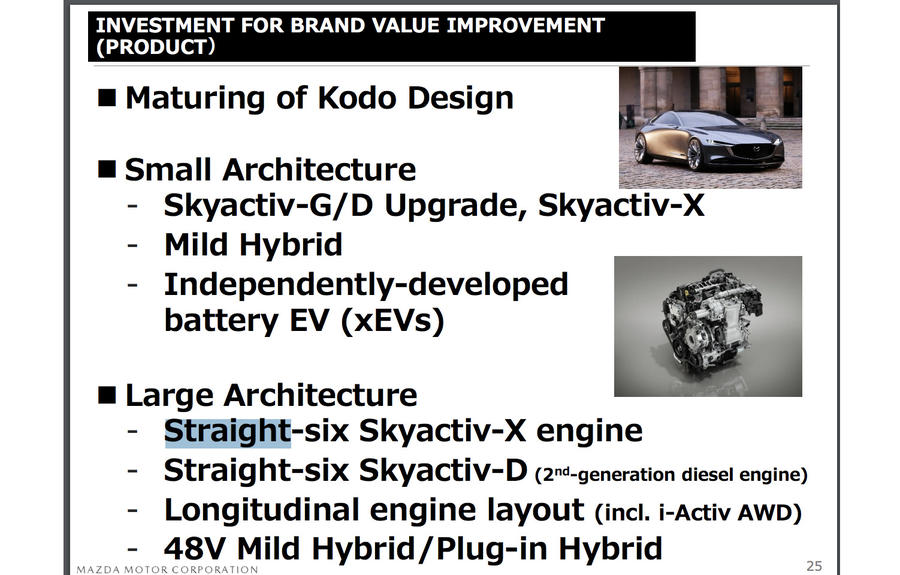 The two engines are listed under the branch of ‘Large Architecture’ - likely relating to the size of platform and body they will be mated to. Such a reference, alongside the development of engines (particularly a straight-six diesel) that almost exclusively sit in larger, premium-brand models in Europe, suggests that Mazda may expand its upper tier of future product offering to compete with Audi, BMW and Mercedes.

Both the two latter brands have had straight-six engines on the market for decades, while Jaguar will soon be returning to the layout - traditionally favoured for refinement and packaging.

Mazda has never had a straight-six engine available in its models, with a V6 last used in the MX-3 coupé, which went out of production in 2002.

Mazda has been a champion of ‘right-sizing’ its engines, using its Skyactiv tech to retain larger-capacity units than most rivals, usually naturally aspirated, that still offer competitive power and efficiency figures.

The Skyactiv-X system, making its debut on the Mazda 3 next month, uses Spark Controlled Compression Ignition, which is claimed to offer the efficiency of a diesel engine in a petrol.

Under the skin: how Mazda is changing internal combustion

If Mazda are now looking to create a new large vehicle architecture, is there a chance they will bring a larger hybrid SUV, a la a CX-9 Hybrid, or perhaps a large GT, maybe an RX9.  I now can't wait to see what 6 cylinder models Mazda bring to the market.  Exciting times ahead.

I got very excited when I saw a video about this on YouTube. A RWD or even AWD straight 6 SkyActiv X 6 would be right at the top of my shopping list. The mild hybrid tech would hopefully counteract the need for diesel power should still be doing the miles for work.

Someone has to show innovation: Mazda does at present; good luck to them!

A long time ago, there was the great debate about over-square engines? Who even remembers that debate? Innovators are risk-takers and when their idea is right, time proves them right. I don't think that I will be around to witness the success or failure of these new designs: pity, they sound very interesting!