BACK TO ALL NEWS
Currently reading: Under the skin: How Mazda is changing internal combustion
UP NEXT
Ford backs call for European ban on new ICE cars from 2035

Under the skin: How Mazda is changing internal combustion

When Mazda developed its Skyactiv-X Spark Controlled Compression Ignition (SPCCI) engine, it perfected one of the most elusive concepts since Nikolaus Otto’s first thumper clanked into life nearly 150 years ago. Why? Getting petrol to ignite in the same way as a diesel by compression instead of a spark had been an engineering holy grail for a long time.

Auto Ignition, Combined Combustion System and Gasoline Compression Ignition are all names used for similar past projects by others attempting to perfect the same concept. The proper name for the underlying concept behind all of these (including SPCCI) is Homogeneous Charge Compression Ignition (HCCI).

With HCCI engines, the fuel is evenly – homogeneously – mixed in the combustion chamber. It’s lean, too, with extra air supplied by a supercharger-like pump. Compression ignition exploits the fact that if you squeeze air enough, it gets hotter (try closing the end of a bicycle pump with your thumb). It’s how sparkless diesels work and why they need a much higher compression ratio than petrol – and it’s why some billed the HCCI concept as the merging of petrol and diesel engine technology.

But why bother and what are the advantages? Plenty, according to many industry gurus. When fired by HCCI, the fuel air charge ignites as a whole throughout the combustion chamber. In a conventional spark-ignition petrol engine, fuel is ignited at the spark plug and then spreads along a flame front. The benefits of doing it the HCCI way include reduced fuel consumption and CO2 emissions and fewer oxides of nitrogen (NOx).

Back in 2001, Lotus Engineering developed a system where the fuel was ignited by hot exhaust gases re-ingested into the engine, to achieve much the same goal as Mazda. Ricardo also produced research engines, and in 2007 Volkswagen demonstrated its prototype Gasoline Compression Ignition engine based on a FSI petrol engine. Like the Lotus concept, it used high levels of exhaust gas recirculation (EGR) to ignite the fuel.

HCCI using hot exhaust gases could only work when the engine wasn’t under much load, because of the smaller amounts of fuel used. For starting and full power, it needed a conventional spark, and a smooth switch between the two proved difficult to achieve.

SPCCI might sound like a cheat – after all, it still involves a spark. But the difference is the spark is used to ignite a small, fuel-rich ‘detonator’ charge injected directly around the spark plug. The rest of the chamber contains a lean charge brought to the brink of igniting by high compression. When the detonator charge is ignited by the spark, the expanding fireball from it increases enough extra pressure on the main charge to make it spontaneously combust. The pay-off is that SPCCI works when the engine is at full gallop and not just a gentle canter – so during most normal driving. The difference between this and the earlier concepts is that combustion is guaranteed and stable. You might say it’s a spark of genius.

What is lean burn? 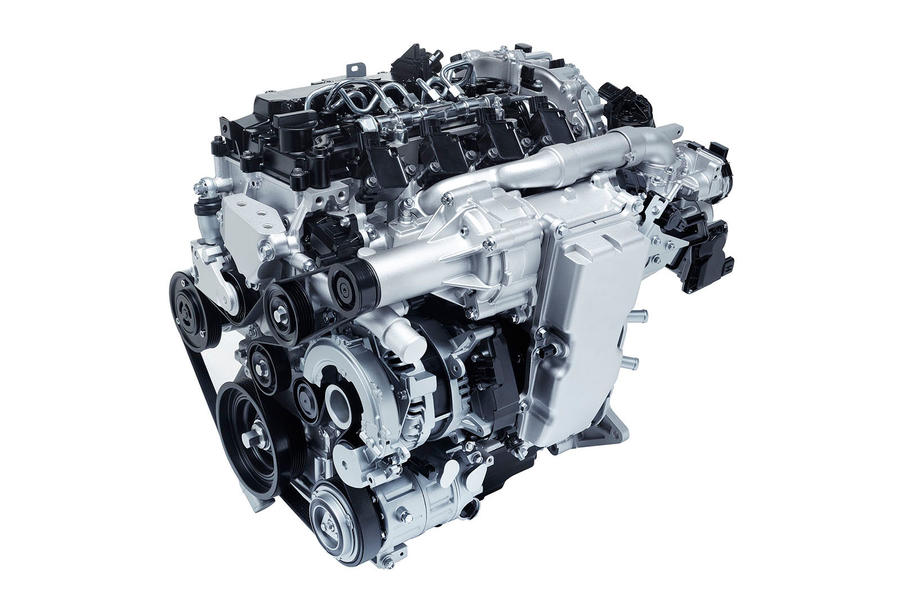 Lean burn simply means lots of air and less fuel. In a petrol engine, the perfect mixture to achieve complete combustion of the fuel is 14.6 parts of air to one of fuel (14.6:1). The Skyactiv-X engine has a Rootes-type supercharger on the front of the engine, not to boost power but to provide enough air to burn much leaner at over 29.4:1.

What Mazda needs the new 3 to do​

Complete waste of time and effort

Didn’t Mazda get the memo?

WE ARE GOING ELECTRIC!

I guess it went to the same place the one about Rotary engines went.....I hear they are still tinkering with that idea!

Differences in the real world. One thing that I always notice with cut out pictures of car engines is just how tall they are. I know they are wet sump etc but I would think there is a huge scope to make electric car like packaging and frontal area by following motoycycle architectures that are so much more compact and lighter.

I'd avoid this engine if I

I'd avoid this engine if I was buying used and likely to go any where near the 100K mileage mark. Using Petrol in a High Compression engine instead of Diesel remove Oil, which is a lubricrant, so I wonder how will the engine will stand up.

I applaud Mazda's efforts and wish them well with this engine, but at a time when cars are going electric I wonder what the lifespan of such an engine design might be? Mazda should pick up the phone to the likes of Land Rover and see if they would buy some of these engines. For the likes of such companies this engine solves and immediate issue with the decline of diesel so it may be a way to help Mazda wipe it's nose on it's investment.