BACK TO ALL NEWS
Currently reading: Hot Mazda 3 on the cards to take on VW Golf GTI
UP NEXT
First drive: 2022 BMW XM prototype

Mazda is set to give a higher-performance 3 the green light, most likely powered by a 2.5-litre turbo engine
Open gallery
Close

Mazda is developing a hotter version of the new Mazda 3, expected to get the green light before 2021 - but it might not come to Europe.

In launching the fourth-generation small car in Australia, visiting programme manager Kota Beppu said he wants a “hyper” version of the hatchback.

“I’m a car guy, so I myself want to drive a high performance Mazda 3… I’ll do my best,” he said. Although he claimed the project had not been officially signed off, insiders suggest that is a formality. Beppu said there was keen interest from “most developed countries”, including the US, Japan and Australia.

While various drivetrain configurations have been discussed, it is the turbocharged 2.5-litre engine from larger US-spec Mazdas that is the most likely powerplant. “Generally speaking we would use the motor to get more performance,” Beppu said in shunning a hot hybrid version.

With 247bhp the 2.5’s output falls short of the latest crop of hot hatches, but 310lb ft of torque brings its own challenges.  “The Mazda 3 is a light vehicle, so if there is too much power and we keep it as front-wheel drive, there is the torque steer phenomenon happening,” he said, nominating the all-wheel drive that’s already developed for the new torsion beam rear end as an obvious solution. 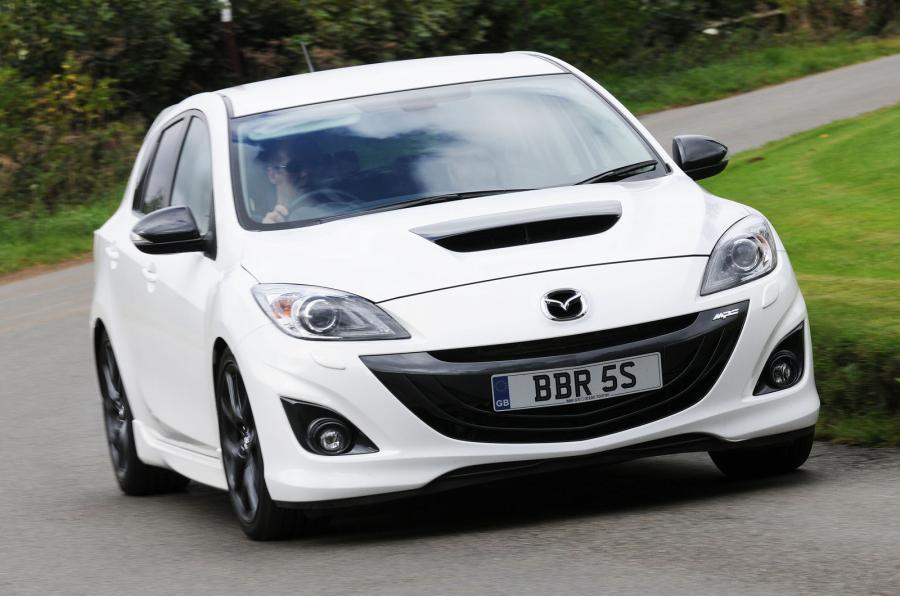 Beppu added that he doesn’t see any high performance Mazda 3 as a track-focused tearaway, instead suggesting the emphasis would be comfort and everyday road use. “It needs to be responsible and friendly… more friendly than a Golf GTI,” he said, although he added: “It should be fast.”

He referred to such a car as a “hyper” Mazda 3 rather than a hot hatch. It remains unclear if the brand will therefore use the MPS or Mazdaspeed branding for such a model.

But it is CO2 that is one of the biggest challenges for a hot 3, something that could challenge its European viability. The forced induction 2.5-litre engine is not currently sold in the region, and might not meet the efficiency requirements to do so.

However, there is clear interest from the crucial US market, which has its own R&D centre in Los Angeles and has reportedly created a proof-of-concept machine under the radar of the brand’s Hiroshima head office.

Mazda last sold a hot 3 with the second-generation car in 2013 (above), under the MPS tag in Europe and badged as a Mazdaspeed elsewhere.

I have a soft spot for mazda after having 2 mazda 6 trouble free pleasure.
I think it's time they brought their excellent race engineers home for this hotty. The sky active 2.0litre is great and given a chance those lads could muster 350 plus
For the peasant who thinks Ford is better please note not even the Russians want and Ford close their factory here with over 600 redundancies. Ford lost the plot after the cortina
lambo58 14 April 2019

The saloon is far more

The saloon is far more attractive

Do a hotter version of that.

Why is Autocar reviewing these SUV's? Buyers of these type of vehicles likely do not frequent car websites. The imancipated male buys what ere indoors says?