BACK TO ALL NEWS
Currently reading: Lynk&Co and Nio: Chinese newcomers shine in Euro NCAP tests
UP NEXT
New 2023 Ford Mustang breaks cover in production bodywork

The Lynk&Co 01 - which launched in Europe last year but has yet to come to the UK - registered a 96% score for its adult occupant protection, including a maximum score for side impact protection.

Meanwhile, the electric Nio ES8 scored well through its automatic emergency braking system and a variety of other crash-avoidance features, leading to a 92% Safety Assist rating.

The ES8 went on sale in Norway in July, and Nio is monitoring the UK market before committing to a launch on these shores.

“A wave of China-made new energy vehicles in Europe is under way, with new models launched by BYD, Xpeng, DFSK, Seres etc.,” said Euro NCAP secretary general Michiel van Ratingen. “Unfortunately, many of these are still not so transparent to European consumers when it comes to safety.

“Lynk & Co and Nio, however, show that ‘made in China’ is not any longer a pejorative term when it comes to car safety. Here we have two new cars, both Chinese-developed, performing extremely well in our tests.

"It’s clear that all manufacturers know that Euro NCAP will hold them to high standards if they want to sell cars in Europe and gratifying that they're prepared to make the investment to get the best safety ratings.”

A number of other vehicles with a diverse range of powertrains have also earned maximum safety ratings from Euro NCAP. The hydrogen fuel cell-powered Toyota Mirai has been handed five stars, despite testers paying "extra attention to the crash and post-crash safety" of the high-pressure liquid hydrogen tank. This "had no effect" on the car’s inherent safety, the body reported. 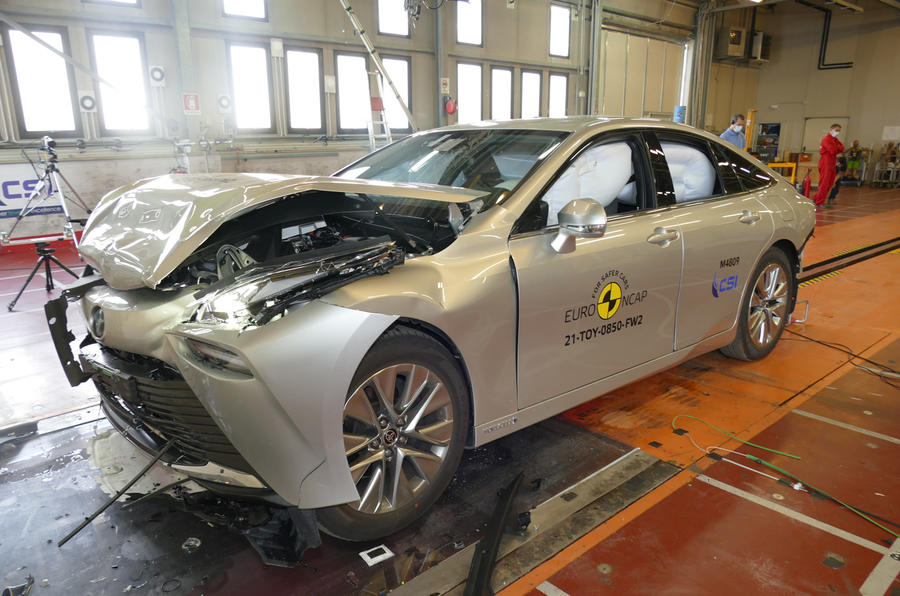 The electric Audi Q4 E-tron and combustion-engined Subaru Outback also picked up five-star ratings in the latest batch of tests, as did the Ford Kuga PHEV.

“This round of tests highlights the direction in which car technology is moving,” said van Ratingen. “All but one of the cars are electrified in some way or another. These are moves driven by a need for greater protection of the environment.

“But the cars also have some of the very latest active safety technology, and this too is part of a trend that has been going on for some time and will continue to do so to save lives on Europe’s roads.

"The manufacturers of these cars don’t ask you to choose between saving the planet or saving your family, and nor should you be asked to.”

@Citytiger, yes, I wholeheartedly concur, we sit in this Country thinking we're great, blinkered,not noticing we're struggling, yes, the Car industry back then we're at bit Friday at 4.55pm finishing time, the that'll do mentality, so, here we are today, we gone through a Bank crisis and now we're trying to deal with a Pandemic, we can't get Food to the shops because there's not enough HGV Drivers, the Government today announced a fast track to get waiting Drivers to pass the two tests to drive, taken them a bit long to realise this, and, I don't think Britain will ever have a Car industry again.

@PeterCavellini, what killed the British car industry was shoddy quality, militant unions, undesirable products and poor management. Rover in the 80's and 90's proved with Honda assistance it could produce quality desirable cars, but it went totally wrong when they failed to carry on the process under BMW stewardship, so no it wasnt "this" that killed the British car industry, it effectivelly self destructed on its own accord.

Based on the Volvo platform? The reason Geely bought Volvo in the first place? Utter laughable nonsense. Be dining on this for ages