BACK TO ALL NEWS
Currently reading: Lynk&Co enters Europe with unique membership model for 01 SUV
UP NEXT
New Aston Martin DBR22 is £1.5m, V12 speedster

Geely-owned Lynk&Co has detailed its imminent European market launch, unwrapping the European version of its 01 SUV and detailing a unique business model that does away with the need for vehicle ownership.

The Chinese-Swedish brand will offer the 01 on a membership basis for €500 (£456) per month, with members offered the opportunity to cancel with just one month’s notice, and lower their costs by sharing their car with others.

’Free members’ get access to the app and can use paid members’ cars on a single-use basis, with the company claiming the average car is in use just 4% of the time. Tax, insurance and registration costs for each car are included in the cost of membership.

The car will also be available to buy outright in Europe, as is already the case in China, but final prices have yet to be confirmed. They will likely command a significant premium over the roughly £18,000 starting price of the Chinese version. A UK launch is on the cards, but will not take place before the end of 2021, CEO Alain Visser told Autocar

In line with the company’s ambition to make the membership process “brutally simple”, the car is available in just two colours - blue and black - and is offered in just one trim level, with a comprehensive suite of advanced driver assistance systems fitted as standard. 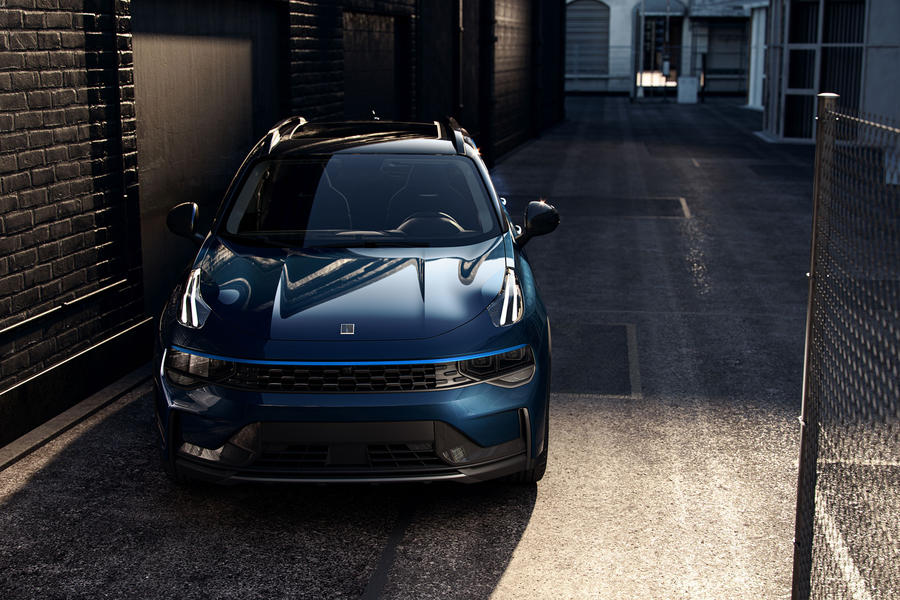 Two electrified powertrain options, shared with its Volvo XC40 sibling, are available: The first, a hybrid, pairs a 138bhp 1.5-litre three-cylinder petrol motor with a 49bhp electric motor for a combined output of 194bhp and 159lb ft. It is capable of covering 0-62mph in 9.0sec and has a top speed of 118mph, with a WLTP-certified consumption rating of 43mpg and CO2 emissions of 150g/km.

The second option, a plug-in hybrid, pairs an uprated 178bhp version of the petrol engine with a 74bhp electric motor for a combined output of 257bhp and 195lb ft. It achieves 257mpg on the WLTP combined cycle and a 17.6kWh lithium ion battery offers an electric-only range of up to 43 miles.

Lynk&Co says the simple line-up will allow customers to take delivery of their car within around three days.

The SUV is based on the Compact Modular Architecture (CMA) platform that underpins its similarly sized Volvo XC40 sibling. It measures 4541mm long and 1857mm wide, with a 2735mm wheelbase.

The distinctively styled 01 went on sale in China in 2017, becoming the fastest-selling car in the world with 6000 orders in its first 137sec on sale. The European version features an overhauled interior and is marked out by a subtly redesigned front and rear end, although its distinctive wing-mounted headlights and rear lights "inspired by Shanghai architecture" remain.

The cabin is dominated by a large infotainment screen that gives access to most systems and controls, and a digital display that is, according to head of design Stefan Rosén, “as big as we could make it”.

Android Auto, Apple CarPlay and a suite of in-built connectivity services feature as standard, including an online sat-nav platform that detects traffic and crowds in urban areas, over-the-air software update functionality, an app-based digital key and a social media camera.

Lynk&Co emphasises the sustainability of the high-quality materials used throughout, pointing to the seats, which are upholstered in recycled fishing lines, as an example.

The first cars will arrive in Europe in April 2021, as the brand works to develop a physical presence in the region with ‘club’-style showrooms, the first of which will open in Amsterdam in October, rather than conventional dealers. A date for the UK rollout has not yet been confirmed but is expected to take place some time in 2021.

Lynk&Co to launch in Europe in 'anti-car' Amsterdam​

I fear this unknown brand

I fear this unknown brand (with a contrived, artificial sounding name) will have a hard time gaining any traction in Europe. Chinese cars have an unfortunate reputation for poor quality and this perception will take decades to change, if ever. Judging by some past efforts I'm not even sure this car will pass the euro ncap test
Citytiger 30 September 2020

I fear this unknown brand (with a contrived, artificial sounding name) will have a hard time gaining any traction in Europe. Chinese cars have an unfortunate reputation for poor quality and this perception will take decades to change, if ever. Judging by some past efforts I'm not even sure this car will pass the euro ncap test

Are you for real? Its a subsidury of Geely/Volvo the model 1 was designed in Gothenburg by Peter Horbury of Volvo design, the man who was responsible for virtualy every Volvo from the 480ES,  and his last one being the C30, he was head of design for Fords PAG (JLR/Aston Martin and Volvo), then became head of Ford America design, then went back to Volvo and is now head of Geely group design, its built using a Volvo designed platform, and uses Volvo running gear, and is built in Ghent in a factory that been building Volvos for decades, the only thing that is essentiually Chinese about it is the people who control the purse strings.. Oh and its already recieved a 5 star best in class crash test result - its effectively an XC40 in a different frock.

I fear this unknown brand (with a contrived, artificial sounding name) will have a hard time gaining any traction in Europe. Chinese cars have an unfortunate reputation for poor quality and this perception will take decades to change, if ever. Judging by some past efforts I'm not even sure this car will pass the euro ncap test

Yeah mate, you should stick to brands like Morris, Rover, Triumph, Hillman and Austin. Oh wait, you can't.

You're going to have to do

You're going to have to do some number crunching on what your current motoring costs and habits are before entering into something that expensive with an unknown brand. I've seen a couple of these around now, whilst they look good in pictures, they're a bit awkward in real life.
abkq 30 September 2020

The C-pillar decoration looks odd. The overall exterior is sort of clean and unfussy but ultimately looks awkward.