This is the latest model to join the second-generation Mercedes-Benz GLE line-up: the GLE 350de 4Matic. It’s also the latest in what the German car maker says will be up to 20 plug-in hybrid models in its range by the end of 2020.

The new four-wheel-drive diesel-electric SUV boasts a class-leading electric-only range of up to 61.5 miles and CO2 emissions of just 29g/km on the WLTP test cycle – figures that promise to make it particularly attractive to company car buyers when UK sales get underway in October.

The extended electric-only range is achieved with a sizeable 31.2kWh lithium ion battery – the largest unit Mercedes has yet fitted to a production plug-in hybrid model. The move mirrors that of BMW, which fits a smaller (24kWh) battery to the X5 xDrive45e to give it an official electric-only range of 54.1 miles.

The driveline used by the GLE 350de is similar to that already used in the C300de and E300de.

At the heart of the SUV is a longitudinally mounted turbocharged 2.0-litre four-cylinder diesel engine developing 192bhp and 295lb ft of torque. This is supported by an electric motor – mounted within the standard nine-speed automatic gearbox – that produces up to 134bhp and 324lb ft.

Together, these two power sources provide a total system output of 315bhp and 516lb ft - some 11bhp shy of but level on torque with the turbocharged 3.0-litre six-cylinder diesel-powered GLE 400d. It's sufficient, says Mercedes, to propel the GLE 350de from 0-62mph in 6.8sec and up to an electronically limited top speed of 131mph.

By comparison, the turbocharged 3.0-litre in-line six-cylinder petrol engine and electric motor of the  X5 xDrive45e produce a combined 389bhp and 442lb ft.

The GLE 350de’s new 31.2kWh battery provides an official electric range of between 55.9 and 61.5miles on the WLTP cycle, correlating to theoretical combined consumption of 256.8mpg and combined CO2 emissions of 29g/km In pure electric mode, the SUV can reach up to 100mph.

The large battery has compromised boot capacity to the tune of 140 litres. With the standard fixed rear seats in place, regular combustion-engined GLE variants have 630 litres of cargo space, while the GLE 350de makes do with 490 litres. Meanwhile, rear-seats-down capacity drops from 2055 litres to 1915 litres. 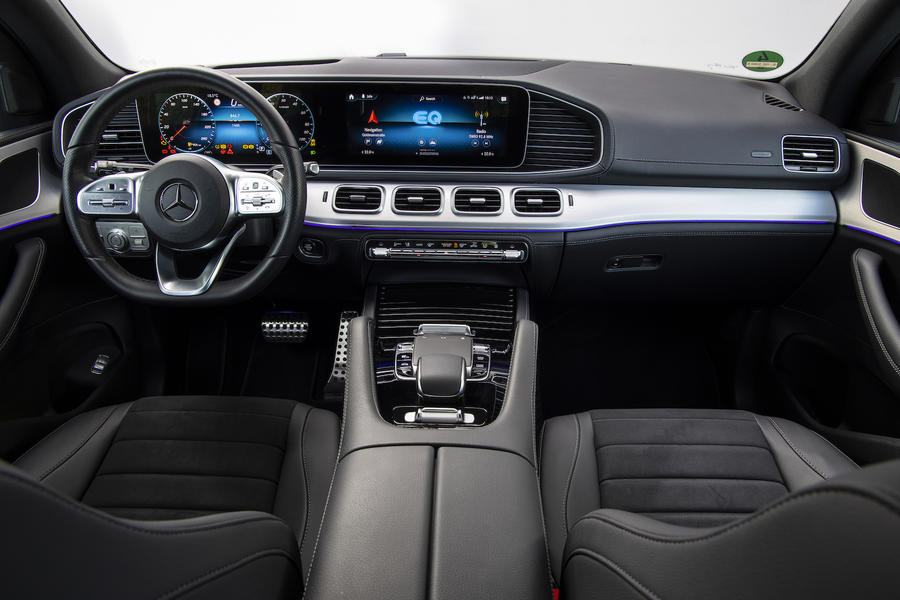 The driveline is wonderfully integrated, to the point that we genuinely enjoyed exploring each and every one of the GLE 350de’s driving modes. Few cars deliver quite the same broad operating qualities, and the overall refinement on part-throttle loads is such that there are times when you’re scarcely aware of what power source is doing the work.

With its battery providing a more than token electric range, you can lay down extended distances in electric mode alone without depleting all of the energy in one go. Switch to hybrid mode and the diesel engine chimes in and out in a seamless fashion, thanks in part to the excellent nine-speed automatic gearbox, which uses a new integrated clutch mechanism to apportion the combined reserves to each axle.

Performance is quite impressive when the car is driven in hybrid mode; the generous torque provides strong step-off and calm cruising qualities.

That said, the two power units are asked to haul a lot of weight. There are times when the engine has to work quite hard to keep progress strong, not least under full acceleration. As such, it pays to relax and let the GLE 350de's newly developed power electronics system decide what's best for any given driving condition.

For those looking for towing qualities, there’s good news here: this car has a towing capacity of up to 3500kg. It can also be specified with a so-called Trailer Manoeuvring Assist system, which automatically controls the steering angle for adding ease of manoeuvring and parking.

Unlike early plug-in hybrid systems developed by Mercedes, here the brakes impart confidence; there's proper feel and linear qualities to the pedal. The amount of electric energy regenerated under braking, meanwhile, is very impressive. It’s never going to save you from having to top up the battery from time to time, but there has been a marked advance in this area, because it's now achieved via all four wheels rather than just two.

When it comes to recharging the battery, the GLE 350de holds one decisive advantage over many of its upmarket plug-in hybrid SUV rivals in that it supports charging at a rate of up to 60kW, at which Mercedes claims a full recharge takes just 30mins. With a claimed 62 mile electric range and markedly improved regeneration qualities, most commutes can be achieved on battery energy stores alone.

The added weight brought on by its complex driveline has robbed the suspension of some of its compliance. However, with Mercedes' latest air spring technology, the GLE 350de still manages to deliver a quiet and cosseting ride that suites its interior ambience.

The dashboard and controls, including its generously dimensioned digital instrument and infotainment displays, are high in quality and lend the new GLE a markedly more upmarket air than its predecessor. The driving position and seats, meanwhile, are terrific. 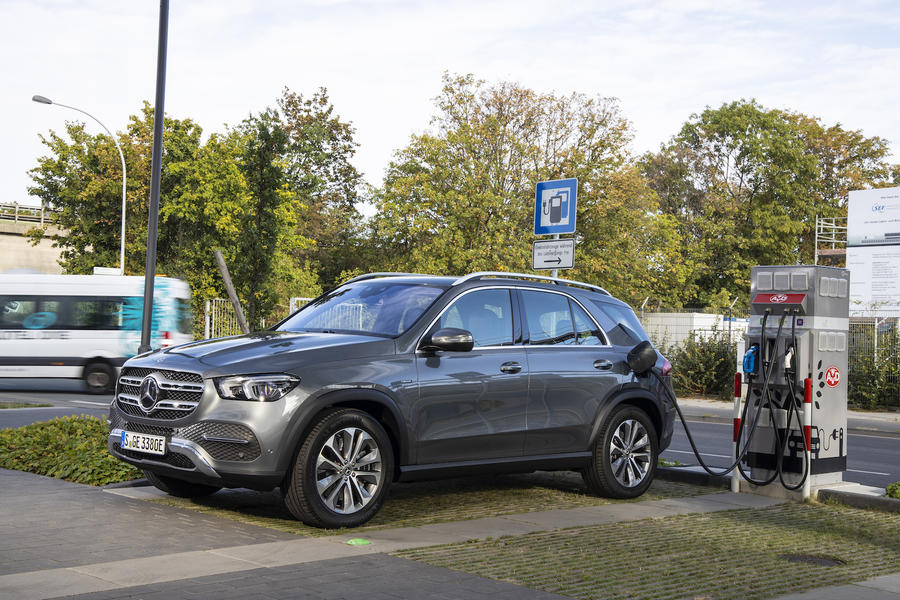 The GLE 350de is well worth considering if you’re in the market for a luxury SUV, especially if you spend a good part of your time on urban roads and are therefore seeking zero-emissions compatibility but also head out on occasional longer trips.

With a torque-laden electric motor and the largest-capacity battery in its class, the GLE 350de delivers what many plug-in hybrids can’t – namely a truly extended electric-only range. And for longer journeys, you’ve got the inherent frugality of a diesel engine, albeit one that sometimes has to work hard to shift the new Mercedes-Benz model’s hefty weight, as back up.

Its best work, however, is done in hybrid mode, where the qualities of the electric motor and combustion engine combine to provide more than adequate performance.

Whether this is the right GLE variant for you will depend on your purchase options. However, its appeal as a company car is clear, thanks to its 29g/km official CO2 emissions rating.

The official combined cycle consumption claim of 256.8mpg – the result of a convoluted EU-mandated test procedure that's heavily weighted towards electric running – is clearly absurd. But if you’re prepared to charge the GLE 350de regularly, you might just manage to get by without using a drop of diesel in everyday driving. Otherwise, you have a big SUV carrying a heavy battery and a relatively small oil burner to haul itself around.

Either way, the feeling of true engineering integrity and roominess within a high-quality interior is hard to ignore. 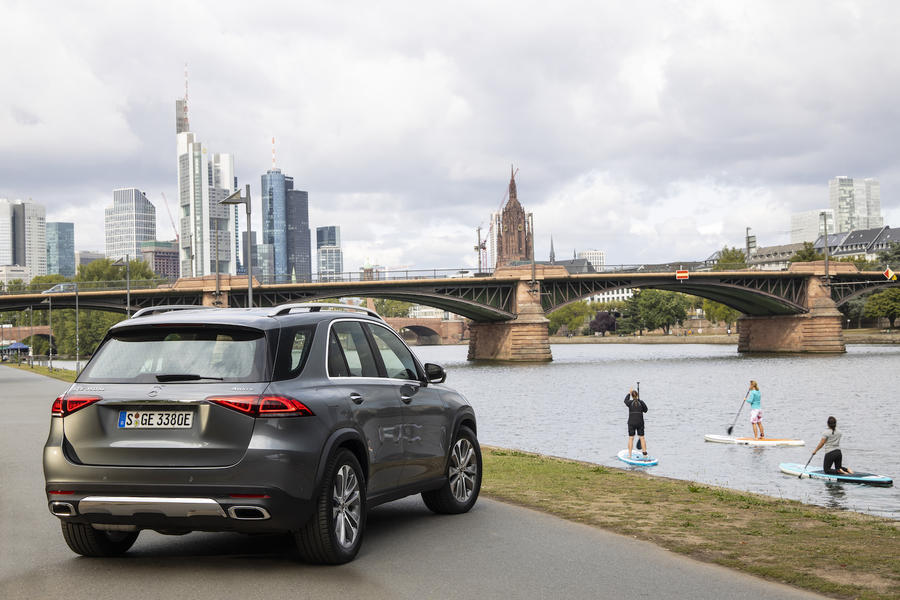 It's heavier, more complex, has less room, needs pluging in every 50 miles to make full use of the battery and earn it's keep, has a worse ride and is many thousands of pounds more expensive than a Diesel or petrol equivalent.  Purely reliant on tax rules not changing!

Perhaps its worth 9/10, but the styling puts me off. That 3rd window just does not work, and Mercedes should have dropped it years ago. Clumsy, pedantic styling - and off putting in every sense. Shame, as they do ride and comfort, and interiors so well.

Shame too about the interruptive posts here.