People used to describe travelling in the 1955 Citroen DS19 as ‘other worldly’. And when you set that self-levitating, space-age shaped, hydraulically suspended car in the context of the crude, steel sprung, clumsily crafted cars of the day, it’s easy to see why. Approaching the 19_19 for a drive is similarly other-worldly.

It’s a car that looks like no other, its pod-like cabin slung between enormous wheels capped with old school mudguards, its body part-blue, part-black, its headlights mere strips and its glass nose recessed beneath them. A pair of slender pod-like objects burst from the rear of the roof to lend it the aura of a moon buggy, and it has the ground clearance of one of Citroen's old, Hydropneumatically-sprung models riding at maximum height.

It’s fully electric, of course, and fully autonomous too, those pods being LIDAR sensors – although the driver can drive if desired. Sizeable doors open onto a large cabin free of obstructive pillars and largely upholstered in purple, its centre consoles and steering wheel in marble-like white. The front passenger’s generous recliner is trimmed in white too, to create a more soothing ambience. 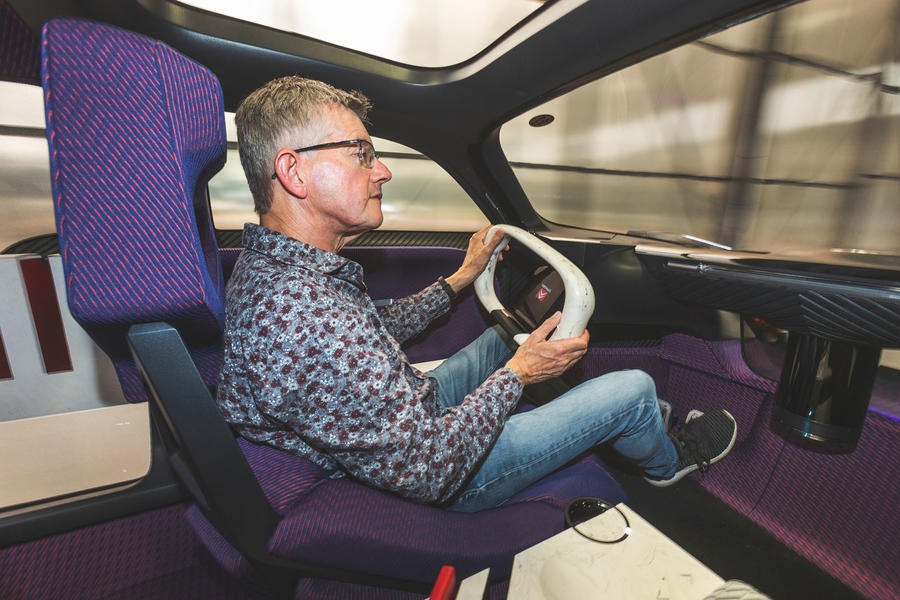 The 19_19’s black sill is high enough that you almost step up into the car, before sinking into the bucket-like cluster of cushions that is the lower portion of the driver’s seat. Those cushions look supremely comfortable, but, because this is the stylish but undeveloped chair of a concept, they’re a little lumpier than you might expect. Never mind – there’s a rectangular steering wheel to divert your interest, its trad-Citroen single spoke hosting a not-very-readable sequence of colour displays.

Beyond it you stare through a shallow windscreen bounded by fat, curving pillars. This vista combines with the equally shallow glazing of the doors to recall the view out from a fat-pillared saloon from the 1940s, which isn’t inappropriate given the 19_19’s mudguards. In every other way, though, this Citroen bounds effortlessly into the future.

The slender black Chevron-sculpted black dashboard is bereft of instruments and buttons, instead a head-up display provides vital information. This clean, uncluttered look signposts Citroen’s quest to simplify car interiors, with the aim of creating a more restful environment decluttered of knobs, switches and controls. Mounted within the dashboard is a large black cylinder that is your so-called personal assistant; it rises periscope-style as the steering wheel and pedals retract when it's called upon to do the driving. 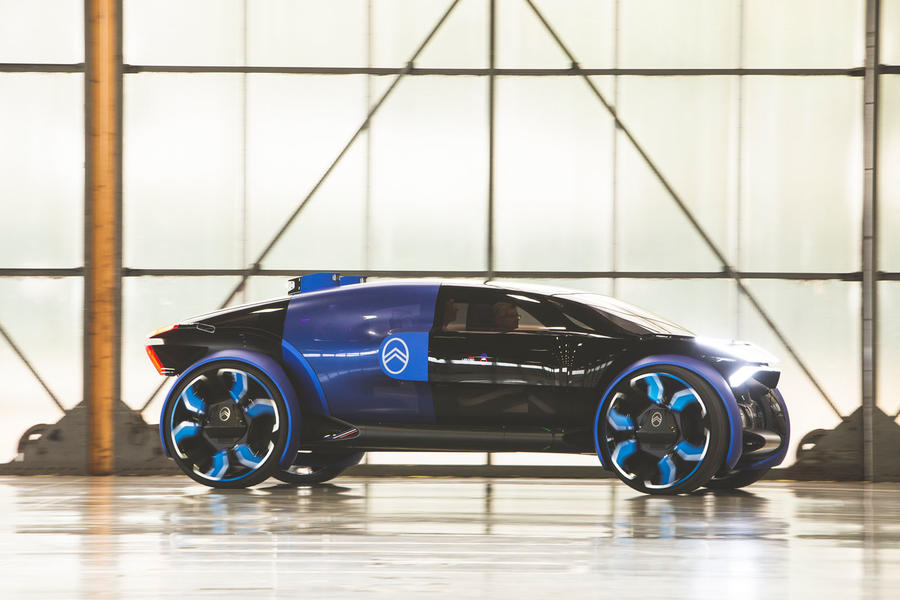 There’ll be no AI driving in this prototype: right now that future is something to be imagined. The 19_19 does drive, though, and electrically too. The main noises of progress are the low hum of the motor and the squeal of the giant Goodyear tyres on the painted hangar floor, the 19_19 confined to the inside because its show-car bodywork doesn’t like the English summer sun. You soon discover that a resolutely rectangular steering wheel is not the ideal piece of direction-changing kit, but hey, this is fantasy and it looks good.

Rather more ergonomically effective are the subtle start button in the marble-look centre console (it’s actually a composite) and the black ring that surrounds it, half of which juts beyond the brick-like console itself. That’s your gear selector, and it’s among the more pleasingly weird of its type.

Citroen design chief Pierre Leclerq says that ‘a suspended passenger cell was the first idea for this car, a cloud upon wheels,’ and, while it’s hard to imagine that when trundling at 15mph in hangar, its sumptuous seating, highly advanced suspension (anti-roll systems, road-reading via tyre sensors and Citroen’s Progressive Hydraulic cushions aid the suspending) and the lounge-like airiness of its cabin make wandering like a cloud easier to picture. It’s certainly easy to see how you’d doze off in that airline-style recliner of a front passenger seat, the 19_19’s personal assistant doubtless waking you on arrival with some soft-spoken words. 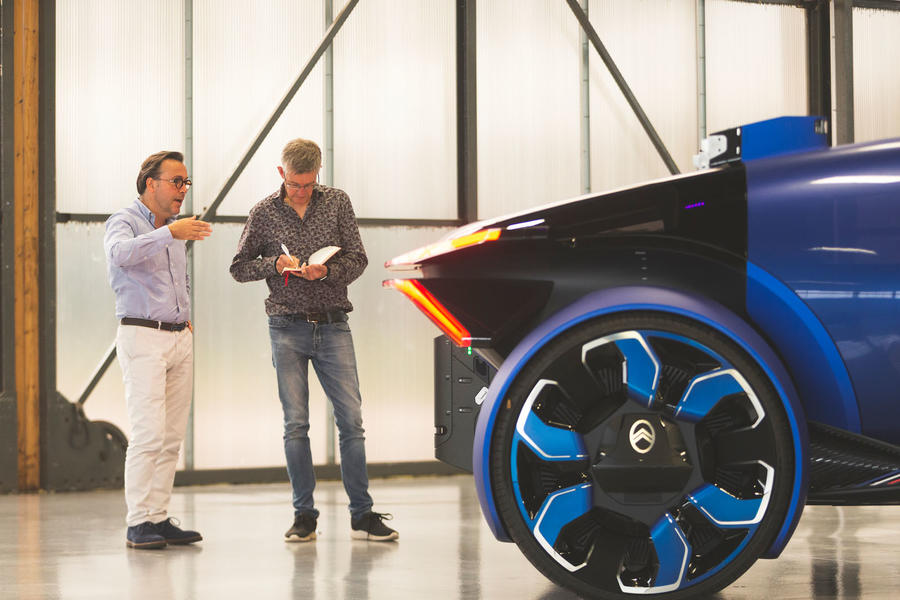 Soft-spoken words are not what you’d expect to hear if you took this beautifully outlandish machine on the road, this confidently wheeled, curvaceously-shaped cocoon is likely to inspire utterances more emphatic. And so it should – this is the concept designed to embody not only Citroen’s future, but also the glories of its past. There have been many of those, the best of which came as the product of bold imagination unfettered by convention.

That’s just like the 19_19, whose shape, ideas, propulsion, proportions, communication, colour, texture and design are a more than worthy symbol of Citroen’s creative century. May the hints within it turn real.

...or does that thing look humongous?! Mr. Bremner looks super-small in those profile shots.

...or does that thing look humongous?! Mr. Bremner looks super-small in those profile shots.

It's a large car. Bremner, however is only 125 cm tall, which exaggerates the size.