We can bemoan the fact that the BMW 1 Series has swapped six cylinders for four and rear-wheel drive for (mostly) front, but it's not all bad. Eighteen months ago work started on the 128ti.

When it arrives in November with an asking price of around £32,000, this will be BMW’s first proper hot hatch in the traditional front-driven mould, and is simultaneously an odd and exciting prospect. It feels much like Porsche building an M3-rival, or Alpine trying its hand at a Volkswagen Up GTI: new ground is most definitely being trodden and an attempt to muscle into an established clique of cars very obviously being made. Yet despite the various unknowns, you’d still expect the result to be good.

The 128ti is also a reminder that things move quickly in this industry. Even five years ago it’s unlikely the hot-hatch front-runners – currently Volkswagen, Ford and Honda – thought they might potentially have a Munich-flavoured problem on their hands so soon.

Of course, this car does not represent entirely new ground for BMW. Plenty of the engineers who have worked on hot Minis over the years have been involved. And many of those cars have been very good indeed, despite the intense disappointment of the latest JCW GP. Meanwhile the name revives for only the third time the ‘Turismo Internazionale’ moniker first seen on the 1963 1800 TI.

The name underlines one fact BMW is very keen to put across, which is that this new 261bhp hot hatch is less about point-to-point pace and much more about the driving experience – or 'easy manipulation of the physics’, in the poetry of German engineers. As such there are plenty of detail changes to be found on the 128ti, even if hardware is mostly recognisable from the range-topping M135i. 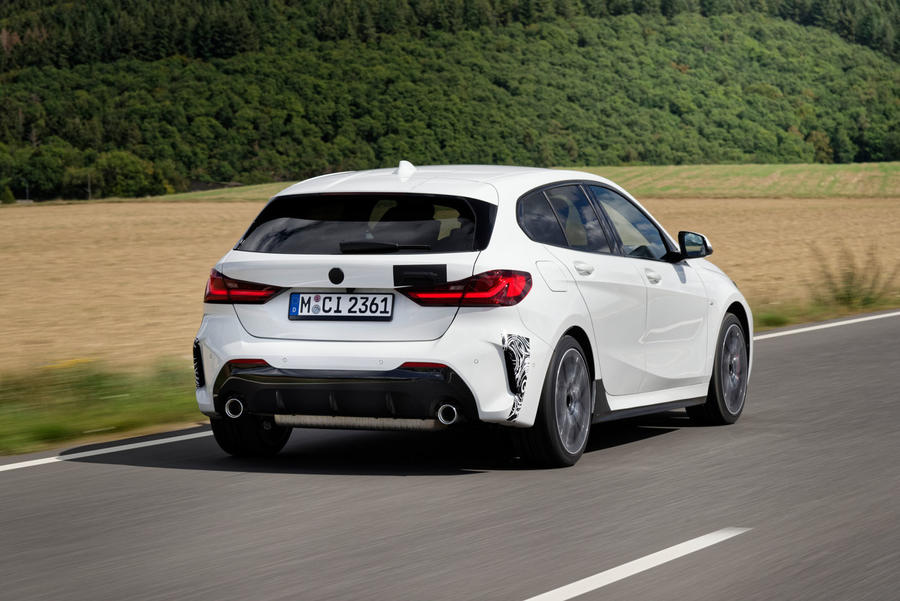 The 1998cc turbocharged petrol engine is shared, only with the wick turned down from 306bhp. And as with the M135i, the only available transmission is an eight-speed automatic. BMW’s defense for not offering a manual on this self-proclaimed driver-focused model is two-fold.

Firstly, it claims uptake would be low, perhaps even less than one third of sales. Secondly, emissions targets would necessitate long gearing for a six-speed manual, whereas the extra two cogs on the automatic mean the lower ratios can be usefully closed up for punchier acceleration. So as it stands, the 128ti comes with one engine tune, one gearbox, and with passive suspension only.

And it’s the chassis of which that suspension forms an integral part that is by far the most interesting piece of the puzzle. Our short drive on the roads around the Nürburgring make one thing clear, which is that the 128ti is comfortably more engaging and keen than its four-wheel drive M135i rangemate. 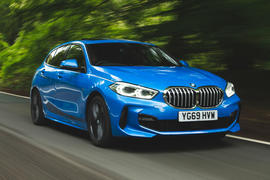 I can’t speak for its most obvious rival, because I haven’t yet driven the Volkswagen Mk8 Golf GTI, but in broad handling terms the BMW also feels more mobile and fluid than the Honda Civic Type R but not as outright playful as the Ford Focus ST, which the development team enjoyed driving during benchmarking. Overall it feels a lot like you'd expect a BMW hot hatch to feel, being agile but composed and with a good degree of throttle-adjustability. Which is a relief.

As for how it happens, there’s a combination of factors. In an effort to reduce understeer and improve turn-in, the underbody bracing found in the front of the M135i has been chucked and the degree of toe-in reduced at all four corners. The springs are also considerably stiffer (around 8%) and the compression-damping rates higher, and crucially the distribution of stiffness has changed, migrating rearwards.

Some of the personnel involved – speaking at BMW's development workshop in the village of Nürburg – explained that these measures at first resulted in a car too alert and responsive. Too ‘pointy’, frankly. Therefore the speed of the steering has been marginally reduced compared to the M135i. Without the stability of a driven rear axle, the locking ratio for the torsen differential has also fallen from 38% to 31% for the 128ti.

At the ground level, BMW has then gone for Michelin’s Pilot Sport 4 tyres, which are less aggressive than you'll find on most cars in this class and offer more evidence that raw pace isn’t the aim here. However, the LSD is still a potent force during hard cornering – or at least it seems that way. BMW’s EPAS rack can now predicts torque-steer and apply counter-torque if necessary, so it's not easy to tell how consistently the differential is actually working, even the net effect is… very effective. 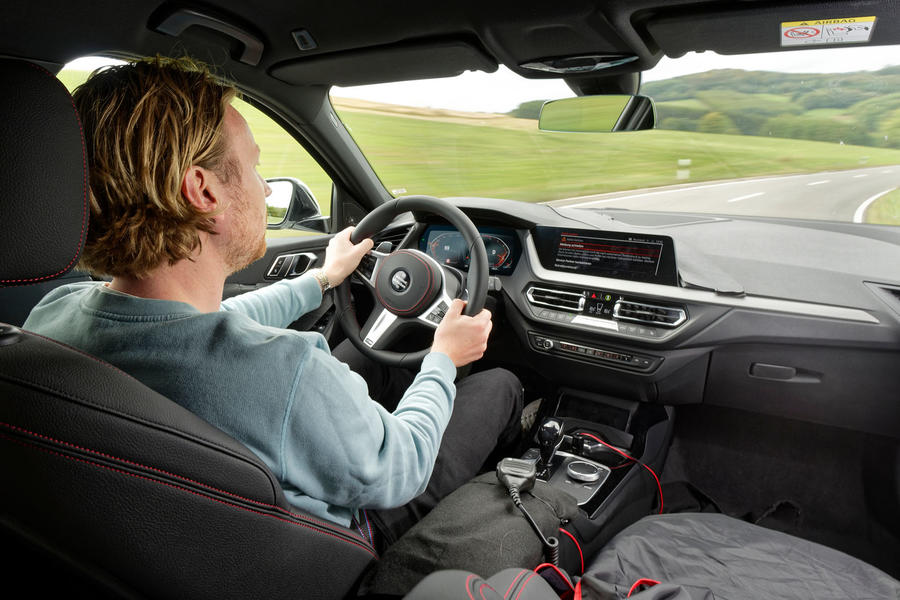 So, the big question. Do you hold off from buying anything until you’ve test-driven the 128ti in November?

You’d be foolish not to, because the 128ti is potentially an excellent option. The main concern is that even on the nicely modest 18in wheels, ride quality on British roads might be too lively for most. We’ll have to wait and see. One other minor qualm is that the B48 engine suffers more from turbolag than I was expecting, given the tune is lighter than in the M135i, though it isn't conspicuously laggy compared to rivals.

The BMW is otherwise an impressive, if outwardly quite subtle, effort. It's seriously quick but neat and natural to guide along the road in a way even the old six-cylinder car wasn’t.

It’s also balanced, keener than the big-boned exterior suggests and the roll-rates and steering response are conspicuously well matched, which is lucky because this helps disguise the fact the 128ti is tubby compared to its rivals. (BMW, if you're reading this, please do consider building a 128ti 'Leichtbau'). Really throw it down an uneven road and it stays remarkably calm, but not aloof.

If BMW’s first proper hot hatch lacks anything, it’s that little bit of fizz – a defining attribute. The sensational driving position of the Civic Type R, the rabid agility of the Renault Mégane RS, the 2.3-litre engine in the Focus ST.

Equally, it might just be the least flawed of any of them, which counts for so much in the hot-hatch dogfight. 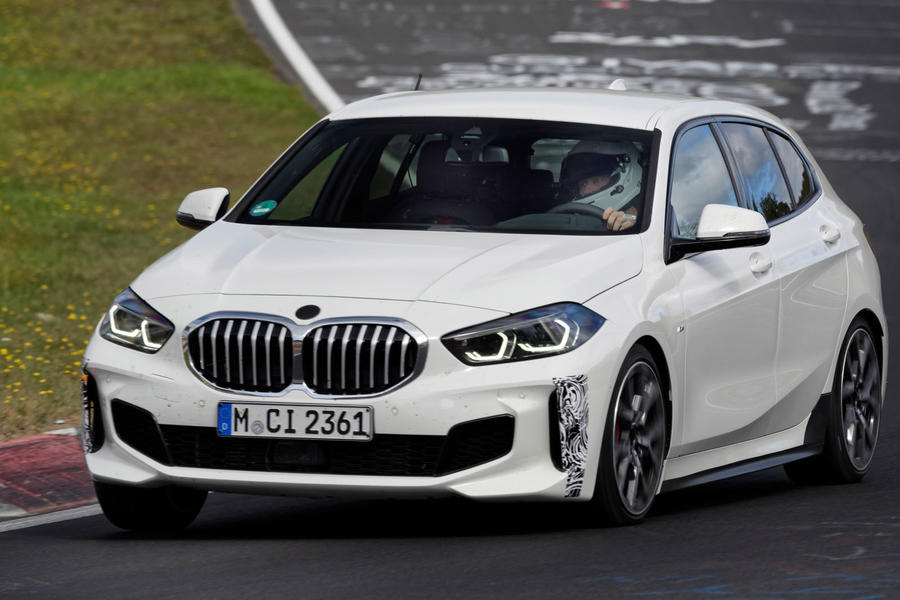 I came to read an article about about a BMW and I get "noises off to the left" about ford, honda and renault rivals which are fine don't get me wrong I've had cars from 2 of those brands myself. The people at BMW know a hell of a lot more about running a viable business than I do but this is reality of todays motoring.

I too have fond memories of

I too have fond memories of the old 2002ti that my uncle had when I was a nipper, and this looks to be a rightful heir.

BUT that face!! Simply hideous, although I suppose black paint and a blacked out grille might just do the trick?

One issue not mentioned is

One issue not mentioned is that the interior compared to the Civic and especially the Focus is miles better quality and design and the tech is the best of anyone. That's what you spend most of your time looking at.

I think it will be a great alternative to the S3 and Golf GTI.

One issue not mentioned is that the interior compared to the Civic and especially the Focus is miles better quality and design and the tech is the best of anyone. That's what you spend most of your time looking at.

I think it will be a great alternative to the S3 and Golf GTI.

The 1 series is better built than the A3 and the Golf too. The latest A3 has gone backwards somewhat in interior quality. At least that's what most of the reviews I've read say.

What the 1 series interior doesn't quite match is the superfical flashiness of the A class, but again, it's easily more solid and better put together than the A Class as well.

I can well believe that the

I can well believe that the BMW's cabin is much easier to live with than the Mercedes. I do not trust Mercedes quality these days - I thought they had learned their lesson from the disastrous lapse in quality in the late 1990s / early 2000s, but the company seems too focused on surface bling rather than deep seated engineering these days. A number of reviews of the A class mention creaking or rattIy trim. I wonder if the new CEO will address this.