BACK TO ALL NEWS
Currently reading: Best group tests of 2015 - featuring Mercedes-AMG, Ferrari, Porsche and more
UP NEXT
The next Hamilton? Autocar meets F1 prodigy George Russell

Autocar group tests span the entire industry. From supermini triple tests to epic supercar battles, we’ve got it all covered, with a decisive verdict and in-depth insight into the cars involved at the end of each test.

These are the most successful group tests that we’ve carried out during 2015, as decided by you, our readers.

Don't be surprised that our most popular group test wasn’t a supercar shootout. The cars in this group represent one of the most profitable and rapidly-expanding segments of the market, and in 2016 it’s only going to get more crowded in there.

As four diverse entrants into a class dominated by unoriginality, the Land Rover Discovery Sport, BMW X3, Volvo XC60 and Hyundai Santa Fe mark the four corners of the class, each offering something different, yet entertaining the same customer base. Who will Lewis Kingston crown? Our second place group test pits the Mercedes-AMG GT S Edition 1 against the might and ubiquity of the Porsche 911 GTS and the Jaguar F-Type R Coupé. Matt Prior takes the wheel of all three coupés, and puts them through their paces during a leg-stretching day on the meandering roads of Wales.

These are very popular models, so Matt’s verdict could sway the decisions of numerous potential buyers. Take a look, and find out whether the drama of the AMG GT S Edition 1 will overcome the supermodel looks of the F-Type, or the sheer capability of the 911. Matt Saunders lines up two performance SUVs for a brawl, accompanied by a lesser-known assailant. The Range Rover Sport SVR's seat on the throne of this class could easily be toppled by the BMW X5 M. And Alpina has a long track record as a master craftsman of alternative luxury performance, so the BMW X3-based Alpina XD3 could also prove a worthy adversary. 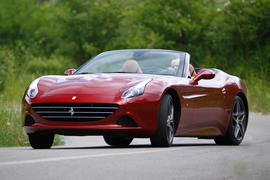 It takes an awful lot to topple a five-star car like the Range Rover Sport SVR. Could one of these two BMW-based upstarts steal its crown? A battle between the brute force of the  Audi RS4 Avant and the all-round talent of the Volkswagen Golf R Estate. On paper, it’s over before it even begins, with the 444bhp V8 of the Audi trouncing the Golf’s 296bhp turbo four-pot. Predictably (and thankfully), it’s not that easy. Nowhere near.

The verdict sways back and forth between the £33,585 Golf R Estate and £54,925 RS4 Avant, as they’re put through their paces in this unusual coupling, before settling on a clear winner. At the more practical end of our group test rundown is the battle of the fast estates: the Ford Focus ST Estate, Peugeot 308 SW and Seat Leon ST. Three 2.0-litre turbodiesel cars with around 180bhp, bringing a mixture of practicality and performance to a market dominated by faux-rugged crossovers.

A clear winner is decided on by Andrew Frankel, with a tussle for second place sorting out the overall ranking. The sizable £3000 price gap between the most and least expensive models doesn’t influence the outcome, with the winner being crowned for good old-fashioned fun. The new Ferrari California T, which has replaced the previous, lukewarm model, faces two of its old foes. Nic Cackett decides if the California can match the diamond-cut precision of the Porsche 911 Turbo S, or the emotional driving experience of the Aston Martin V12 Vantage S.

The previous California was criticised for its imperfect execution and un-Ferrari-ish lack of soul, so the new and improved replacement had some catching up to do. Find out how it fared on the twisting Welsh tarmac. Three £150,000 convertibles, and one verdict. Matt Saunders tackles two of the most hardcore road cars on the market at once: the Porsche 911 GT3 RS and the McLaren 675 LT. Both of these track-honed road cars weigh less than 1500kg and boast blistering 0-62mph times: 3.3sec for the Porsche and 2.9sec for the more powerful McLaren.

A careful comparison is not the only thing this twin test can bring. As two of the most sought after – and as a result, sold out – supercars of this year, the in-depth look at two acutely unavailable supercars may be the best look at them we can have for now. The BMW M3 Coupé is dead; so naturally, you’d expect the M4 to fill its enormous boots. But we’re a bit more thorough than that here at Autocar, so we invited some of its kin to try for the crown, too: the Alpina B4 and the BMW M235i.

The B3 and M4 are priced just £200 apart and share the same engine, while the M235i is a full 105bhp down on the M4, but undercuts both by £25,000. You’ll have to read the triple test to find out exactly what we think of each. Andrew Frankel’s verdict may come as a surprise. This is a real clash of the titans: the Honda Civic Type-R meets the Renault Megane RS 275 Trophy for the first time since the Honda smashed the Renault’s Nürburgring record. And the Volksagen Golf R joins in the fight, too.

The statistics are very similar: less than £2000 splits the most expensive from the least, all have 2.0-litre four-cylinder engines, and with the exception of the Type R’s 306bhp, only two horses separate the Golf R and Megane RS. Matt Prior decides on a winner in the photo-finish of this hot hatch triple-test.