From £117,2709
Mighty twin-turbo V8 up front, two seats in the middle – and the back? You can make the back do whatever you want
Open gallery
Close

That’s the question Aston Martin boss Andy Palmer asks his engineers, and it’s not an unreasonable one for you to ask, too.

And the answer? Well, as they’ll tell him and I’ll tell you over the next 1500 words or thereabouts: it’s not that simple, guv. In some ways, yes, it is better; in many ways, no, it isn’t; but, for the most part, it’s just different. And that’s fine.

Where are we, then? Two models into the ‘second century plan’ that’ll see a new Aston launched every year until 2022, when the cycle begins again. It’ll be a range of sports cars under constant reinvention, with profits from the first providing the investment to develop the next. Like a normal car company. “It’s not rocket science,” says Palmer.

First, then, was the Aston Martin DB11, the big, comfy grand tourer, at one end of the sports car scale. And now there’s the Vantage, which sits at the other end, but using a fair degree of DB11 parts.

It’s a strict two-seater, with a Mercedes-AMG 4.0-litre twinturbocharged V8 engine sourced from Aston’s part-owner in the front and power going from there to the back via an eight-speed transaxle torque-converter gearbox and an electronically controlled limited-slip differential.

To see beneath the new Vantage’s skin is to see the advances Aston has made since the old VH architecture died and the new, still-all-aluminium structure arrived. Only 33% of the structure is shared with a DB11; at 4465mm, the DB11 is 274mm longer than the Vantage but, at 1942mm across the body (2153mm to the mirror ends), 2mm narrower than the new car. A 911 is a thumb’s width longer than the Vantage but, at 1808mm, rather a lot narrower. Which could be important.

There are more pressings and castings than extrusions in an Aston’s make-up these days. They’re more expensive but more space efficient for a given strength, so the Vantage seats two big people very comfortably and the boot, underneath a hatch tailgate, is big enough for two golf bags. The skin is a mix of aluminium and plastic composites, and dry weight is quoted at 1530kg including the lightest options. A 911 GTS is less than that, even full of fluids and with a statutory 75kg added to it to represent driver and fuel. Like for like, the Vantage could be 10% heavier than a 911. That could be important, too. 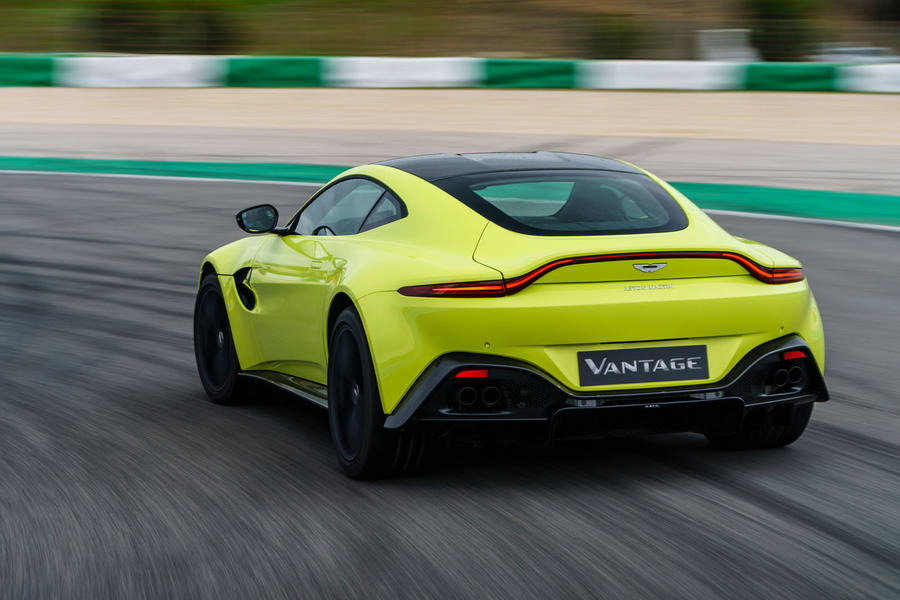 For the first time in a generation, the Vantage is wilfully different from other Astons outside (do you like it? I do on three sides; the front I’m getting used to) and inside. I like most of the inside; the finish is good, the plastic on the air vents grates a bit less in a sports car than a grand tourer and you can, apparently, have a round steering wheel.

It all works most nicely with the racier Alcantara trim, to my eyes. The leather looks a bit stretched around some seams and stitches but, well, I suppose it’s a sports car. Shouldn’t things be pulled tight? A bit racy?

Mechanically, it sounds like it is. In the V8 DB11, which shares this engine and its 503bhp tune, the engine note – so raucous and voluble in its AMG applications – has been turned right down. Here, they’ve let it rather loose again. A few years ago, you could have chosen any of several different Astons for the same job. This one, you’re in no doubt, is the loud one. That extends to the drive modes – which, of course, this car has.

Ultimately, these policies mean more to Aston than us. But whereas the DB11 has GT, Sport and Sport+ chassis settings, the Vantage’s dampers are shifted along an imaginary scale to Sport, Sport+ and Track, all intended to be tighter and firmer to the point that Track is arguably too stiff for bumpier racetracks. It’s good on those, though, Aston says. In fact, Aston says, it slides quite easily.

Aston is good at understatement.

Remember a few things. Yes, the Vantage is heavier than a Porsche 911, but the 1630kg or so it’ll weigh is competitive among the other company the Aston will keep. Its mechanical layout (the entire block sits behind the front axle line) means the weight distribution is 50/50 front to rear. Only one tyre option, a bespoke Pirelli P Zero, is offered. It has all been engineered by people who believe that cars should handle properly beyond the limit. And 'off' means 'off' on the three-stage stability control. Goody gumdrops. 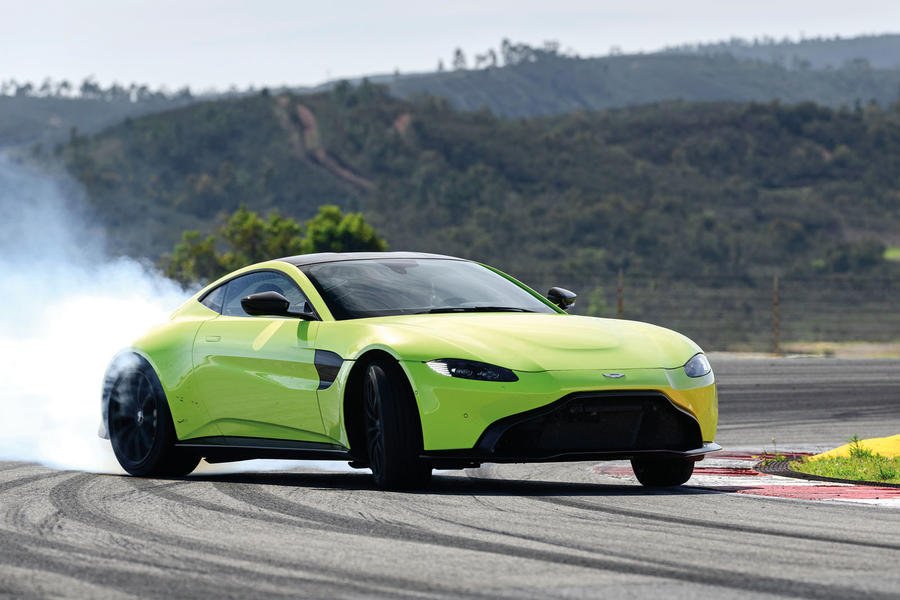 On a circuit, then, the Vantage is terrific. The engine note is as raucous and hard as you’d want it to be, the (optional) carbon-ceramic brakes stop it brilliantly and hold out in warm temperatures, and the tyres resist wear better than 505lb ft from 2000rpm has any right to allow. Body control is good, even in the slackest of suspension modes, and there’s a great sense of agility because it feels like the car pivots around its centre – where you’re seated.

The front goes where you point it and there’s a terrific level of control and precision over the rear. The rear subframe is rigidly, rather than squishily, mounted to the chassis and that apparently gives excellent lateral stiffness, so the car’s back axle does what the engine and e-differential (which can be fully locked or fully open, depending on what’s being asked of it) want it to do.

Under power, on a track, what it wants to do is lock up to precisely your amount of bidding, making the cornering line entirely your choice. It’s not unlike a Ferrari 488 GTB in that fashion; only that, because the engine is mounted low and at the front, the beyond-limit balance is even better, to the extent that I’m not sure there’s another current production car this docile on a circuit.

You can drive it in a racier fashion too, where it’s still balanced and beautifully neutral but less incisive than a 911. So they do different things better. The 911: nuanced steering precision. The Vantage: antics.

Anyway, that’s all jolly, but this is a road car, after all. It’s one whose ride is composed and fluid, especially in Sport mode, but Sport+ doesn’t usually throw it out of kilter. The engine and transmission go through various stages of angry as you turn those up, but the moderate one is good for the road – grumbly and growly and plenty responsive enough – while the big, easy paddles, fixed to the steering column so they’re always where you left them, are some of the easiest to use in the business.

Pulling one puts you in manual mode, an extended pull of the upshift puts you back in D. All shifters should be like this, especially when mated to a gearbox that’s as smooth as the ZF eight-speeder. (It sometimes hesitates to give you downshifts on a circuit, though, which is a Mercedes-ish thing to do, so it's perhaps down to the engine, not the gearbox.)

The steering? On track, it is full of feel; at lower cornering forces, naturally it doesn’t quite replicate on the road. A 911, which has a lightly loaded front end and less need of assistance, is, I think, more talkative – but that’s fine. It is smooth and fast, centres as it should and says as much as you’d hope. The balance and poise are still there, too, albeit with the caveat that this is still a wide car and, from inside, you can see none of the exterior bodywork. 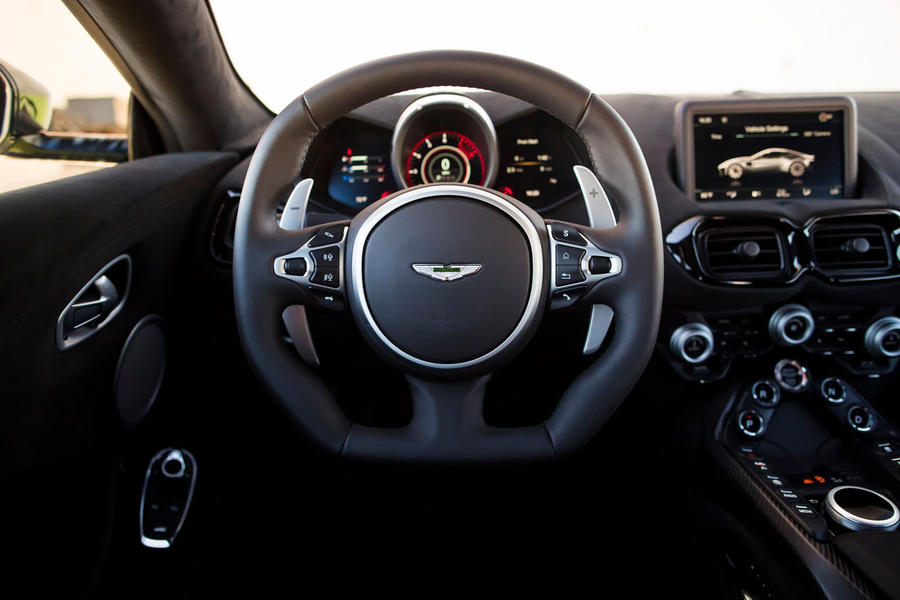 It’s just as well the Vantage is poised, responsive and predictable, because you’re relying on it to do the shrinking around you. To an extent, it does; with the aural and tactile cues this car gives you, it’s thoroughly enjoyable. And here’s the thing: I’m considering the Vantage against consistently the best sports car in the business here and it goes toe to toe with it.

The others priced at the lofty £120,900 the Vantage demands? Some offer different things or are better in one or two areas, but I’m pretty confident that none is overall as complete and enjoyable as the Vantage.

So is it better than a 911 GTS? Perhaps not. But it’s different enough, and good enough in enough ways, to be a genuine, desirable alternative. Consider it different rather than worse. And it does quite a lot of things better. When you consider the respective sizes, budgets and facilities of Aston and Porsche, that in itself is a spectacular achievement. 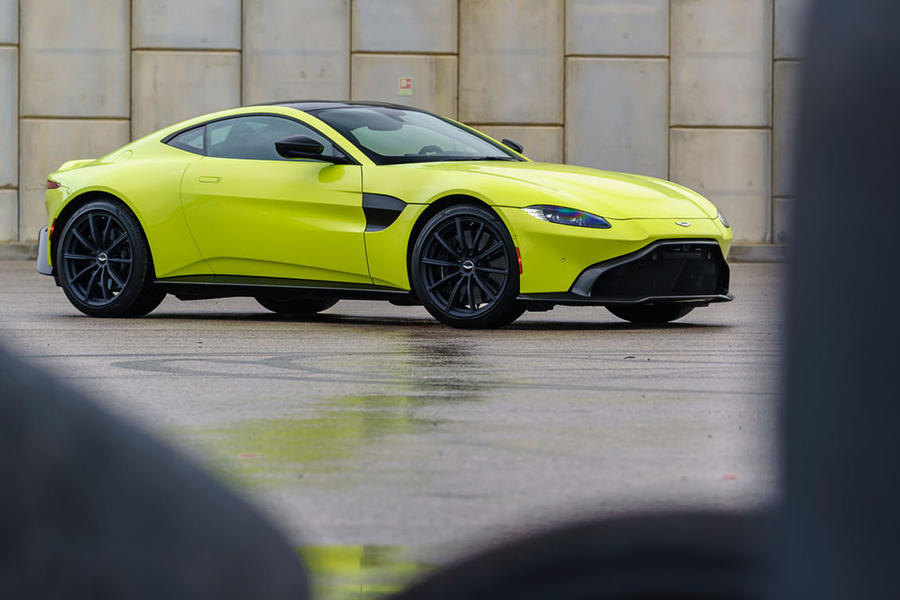 I like the look of this,and the balance too,but for a practical daily driver for me the important  point was in the middle of the article,that it takes 2 sets of golf clubs! Or for me a couple of Fenders and an AMP! try that in the trunk of a 911 or an R8! It is a different car and different choice than any 911,and as has been said,an Aston,and of you are in the market for an Aston you don,t want a Porsche, nice though they are.

Please can it be arranged by clever techies to jump directly to the second page of comments WITHOUT going back to the top of the article?

Thanks for giving it some thought!

It's really time to compare how front engine compares with rear

How does this Vantage with its front engine placement really handle compared with the 911. I'm not sire we will ever be told the answer. Lately many reviewers have been talking about how neutral and safe the handling of most 911's are- especially the new GT3. But are the 911's really so neutral and safe? Is the Vantage more so. I suspect we won't be told this.