BACK TO ALL NEWS
Currently reading: Aston Martin Rapide E: new details of electric super-saloon
UP NEXT
New Lotus electric sports car to use Britishvolt batteries

Aston Martin has revealed more technical details for its upcoming fully electric luxury saloon, the Rapide E, ahead of deliveries starting next year.

The limited-run model will be powered by two rear-mounted electric motors combining to produce “over 602bhp”, according to the firm. The method of mounting both motors over the back axle differs from other electric saloons such as the Tesla Model S, which, when in dual-motor configuration, mounts one on each axle to give four-wheel drive.

The torque output is set to be close to 738lb ft (1000Nm), allowing the 50-70mph sprint to be completed in 1.55sec. A 0-60mph target of around four seconds has been set, a similar figure to the Rapide S on which the EV is based, although the true figure is yet to be confirmed. Pricing still has to be announced, too, but a Williams Advanced Engineering source was able to reveal that the car's kerb weight is “almost identical” to that of a regular Rapide. 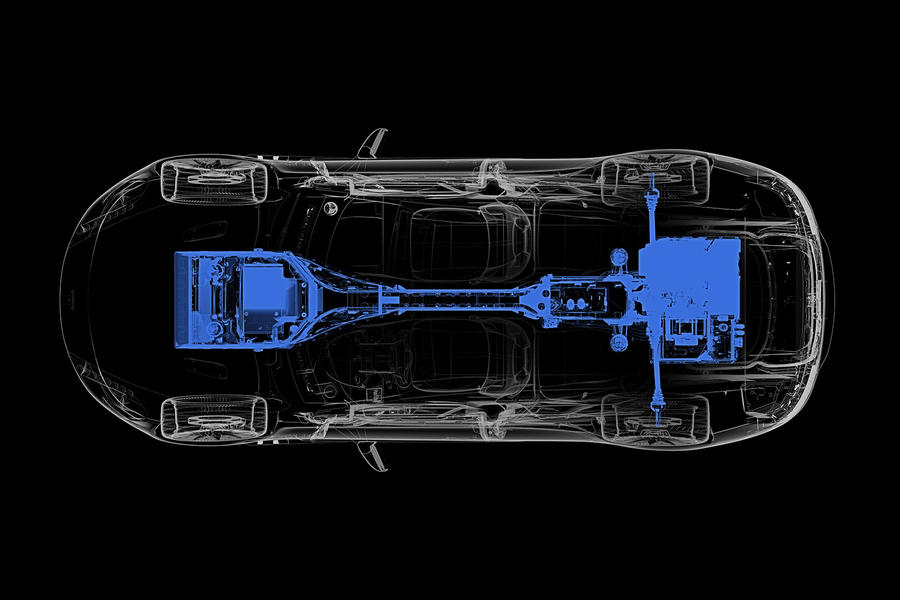 Aston claims it has engineered the Rapide E for “repeatable performance”, meaning the quoted acceleration figures can be achieved in quick succession without the performance degregation seen in similar EVs. The top speed of 155mph (hence the release of just 155 units globally) can reportedly be maintained continuously for 10 minutes. ​

The powertrain underneath the Rapide E, engineered by Williams Advanced Engineering and assembled at a new facility in Coventry, uses a cutting-edge 800V electrical architecture. The technology will allow the Rapide E to offer a 350-mile-per-hour charge rate, allowing it to make use of forthcoming 350kWh DC chargers.

When did you first get involved?

“We’ve been very active in working with OEMs on battery technology and we did some work with Nissan and Andy Palmer [former Nissan chief planning officer and now Aston CEO] had been involved in that work. When he moved over to Aston Martin, he had a very clear vision of electrification as a route the company needed to go down. He was well aware of our activity and brought us into the company, starting with the very first project electric Rapid with Formula E power. We then came up with the idea of getting an APC grant to get the development done. That journey has been two and a bit years.”

Are you championing British suppliers with the powertrain in the Rapide E?

“We are a small one, but like any automotive manufacturer, we do bring in parts from Europe. [For] this particular battery, because it’s quite low volume, quite specialist, we are leaning quite heavily on the suppliers we use in the UK. At least 90% of everything bar the cells is a UK supply.”

Why mount two motors on the rear axle instead of spreading them across both axles?

“Very much the brief for the whole thing was that we don’t really want to change the Rapide at all, as it is a limited-volume car. The affordability of the project is dependent on carrying it over. What we had to do is carry over a rear-wheel-drive platform. We also wanted to give it Rapide power, plus a bit, so two motors was the sensible solution.”

Is it less practical?

“The boot has changed, but the overall boot volume is very similar. Aston were very keen to keep the car’s practicality.”

How much does the Rapide E weigh?

“It is virtually identical to the standard car. That’s why you can see a lot of cost engineered into it, with a carbonfibre frame and materials such as Kevlar. The powertrain is approximately the same weight, all in, to the V12 and gearbox that has been taken out."

What is the car’s range?

“The target was that it had to be more than 200 miles on the NEDC cycle. We’re pretty comfortable that it’ll be in the region of 230 miles. We had to have performance, weight and range as similar as possible to the standard Rapide.”

What are the benefits of the 800V architecture?

“The big benefit is weight: you’re operating at a lower current with less conductive material needed. Aston was also adamant that it wanted to do this project to gain engineering knowledge and development for future cars, such as those in the Lagonda range. So an 800V system is future-proofing in terms of the latest charging tech.”

Customers of the Rapide E electric model will be very different from those interested in a top-of-the-line Tesla model, according to boss Andy Palmer.

“We’re looking to those guys looking for something above Tesla. That customer probably isn’t looking for 'Ludicrous mode'. Our offer will have very credible acceleration – equal to a petrol Aston Martin – but you’ll be able to drive the car rapidly all the way around the Nürburgring without it derating or conking out on you.”

Aston Martin is currently running prototypes of the Rapide E – one of which we drove (below) – ahead of deliveries in 2019. Although a fair amount is set to change before production of the 155 customer-spec Rapide Es begins, the engineering mule does prove the fundamental viability of an electric Aston Martin. 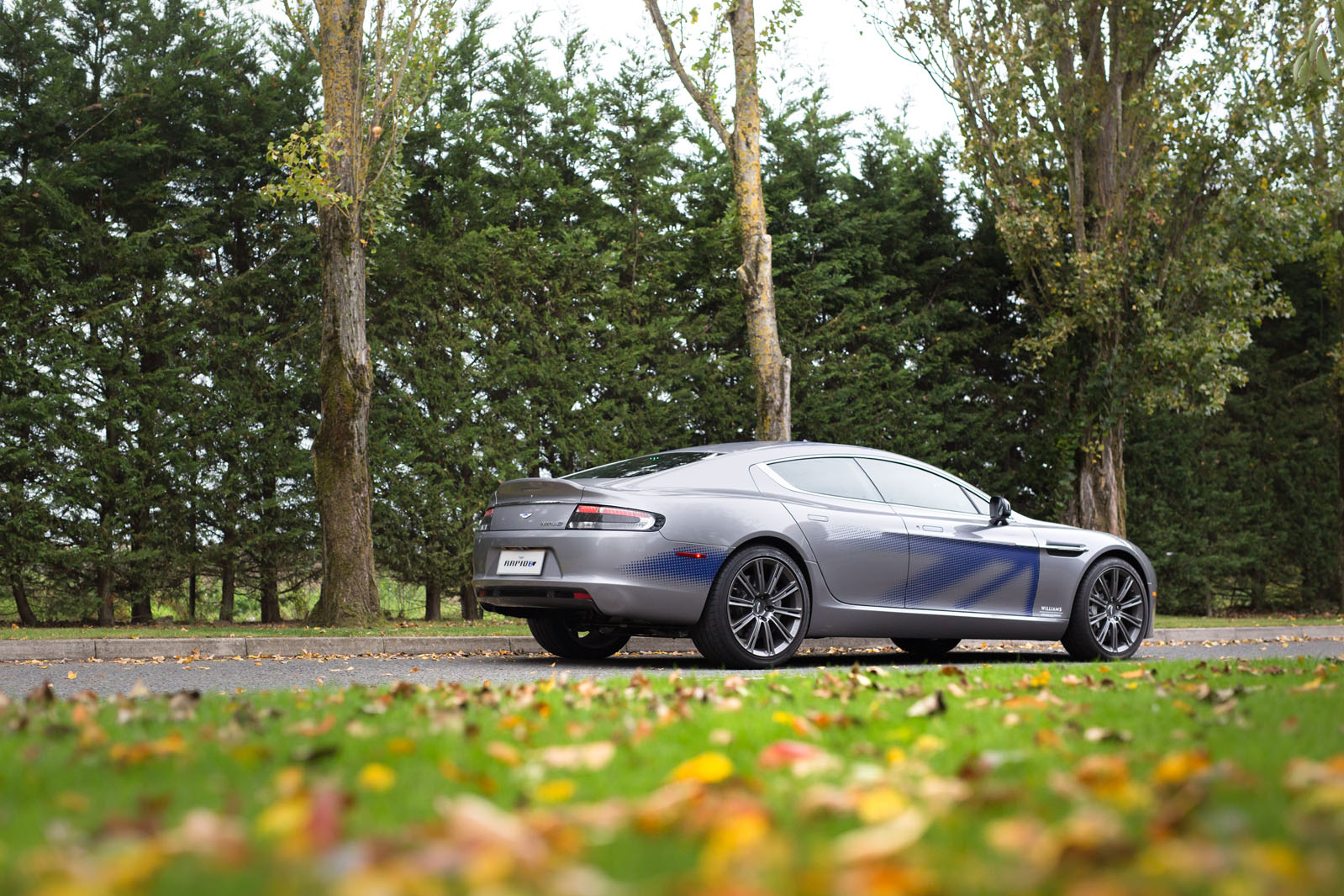 The prototype has been developed by Williams Advanced Engineering, which is also working on the production version. It will be based on the Rapide AMR.

The car is described as a proof-of-concept rather than being too indicative of what the finished article will be like. As such, its engine bay is filled with what is in effect one of Williams' Formula E battery packs and has required some bulkhead surgery to make the pack fit. The final battery will be smaller and more compact, but still front-mounted. Drive is handled by the rear wheels only. In the prototype, it is through a single electric motor but the finished article will switch to a pair.

The relationship between the Rapide E and other future Aston Martin electric vehicles will be complicated. Palmer says that all EV powertrain intellectual property will reside with the company but admits that the Rapide E is a proof-of-concept rather than an architecture that will be developed for other models.

When asked why Aston Martin was choosing to launch its newest powertrain in its oldest car, Palmer said: “I’ve engineered cars for a long time. It’s very hard work when you try and change everything at once… I wanted to do this with a car we understand intrinsically.” 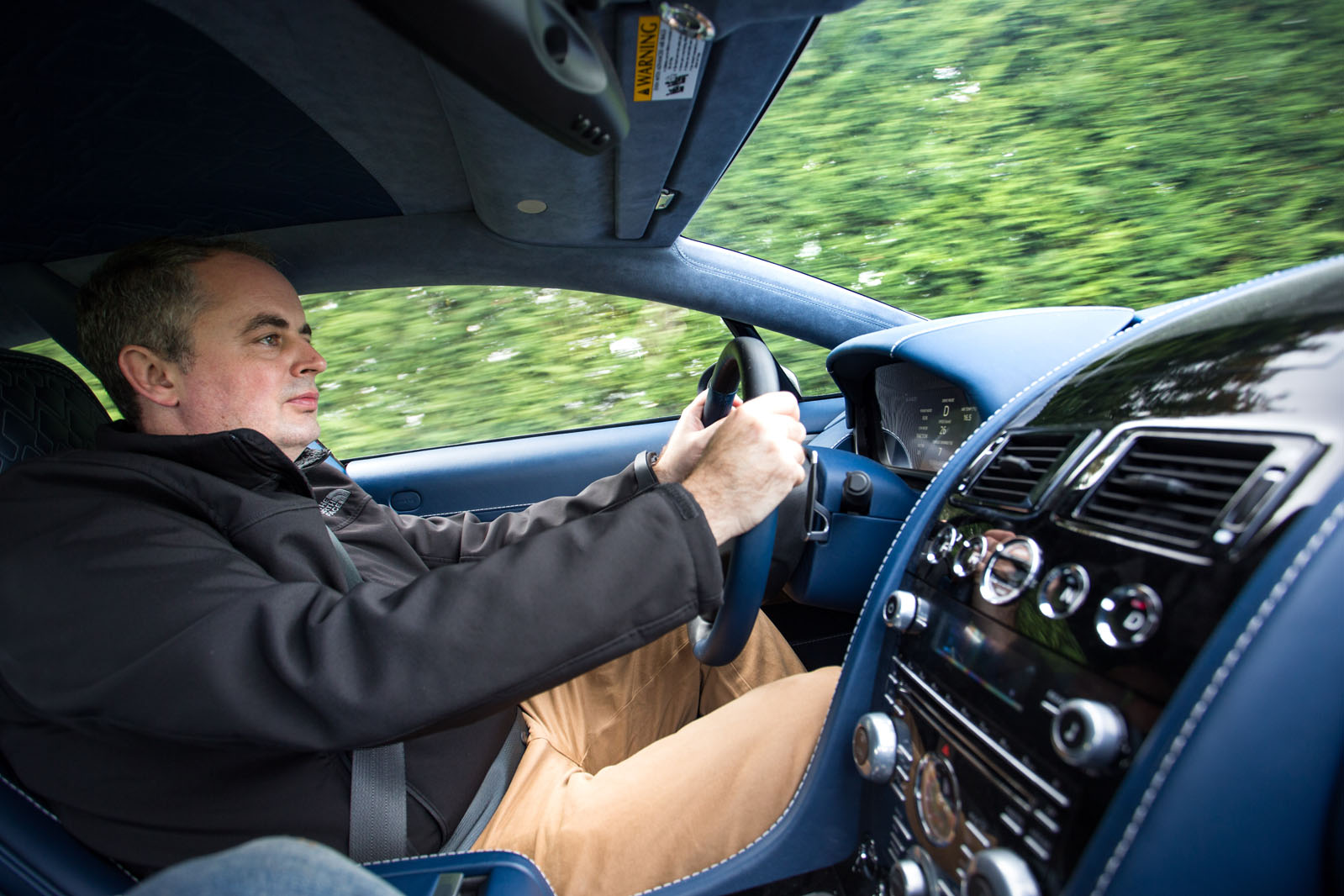 Based on an original Rapide development mule, the electric prototype is closer to a concept car than the finished article. Windscreen wipers and indicators don’t work – victims of the switch to a new electrical architecture – and the digital instrument screen reports a scrolling list of warnings and status messages alongside speed.

Even restricted to the edges of the Williams car park, it’s clear that the prototype isn’t going to humble a Model S in a drag race. Even a Nissan Leaf – one of Palmer’s other projects – would probably have it beaten off the line because there is a noticeable delay between pressing the Rapide E’s accelerator pedal and feeling it start to move; apparently, this is down to the lack of traction control. Once the electrons are flowing, it feels strong, but testing is limited by the desire not to be shouted at. My 40mph peak speed is still well in excess of Williams’ 15mph site limit.

Yet while some way off the finished article, the first RapidE does demonstrate that an electric Aston Martin can still deliver an appropriate sense of occasion. No surprise that it can’t match the aural charm of the regular Rapide’s V12 engine but, under hard use, the motor produces an electric whine that actually suits the car pretty well while delivering a reasonably forceful shove. Ride quality is still acceptable. The sizeable mass of the standard Rapide’s 12-cylinder engine means the electric version will weigh about the same. If the engineering team can deliver on the target of proper high-speed ability and find the battery capacity to match it, then the production Rapide E will be a very interesting car indeed.

'Why I bought 24 Aston Martin Lagondas'

WHY is it LHD??  Don't tell me the Gerry's get it before we do... that would be bollox

But then they target a 0-60mph time of four seconds, a Model 3 performance beats that let alone a Model S 100. Remember deliveries start next year so you'd like to think a pre-production model is close to proving those figures.

I think the magic number here is 155, between existing Aston customers and collectors, I would imagine they have a good chance at selling them all. Hopefully, the revenue generated, along with the experience gained, will be invested in future electric Astons.