BACK TO ALL NEWS
Currently reading: All-new Hyundai i30 on sale from £16,995 this March
UP NEXT
Toyota bZ4X concept is brand's first bespoke electric car

The third-generation Hyundai i30 will go on sale in March priced from £16,995.

In the run up to its market launch, Hyundai has confirmed that the five-door hatchback will be available in five trim levels - S, SE, SE Nav, Premium and Premium SE - and come available with three engines, two petrols and a diesel (scroll down for more on engines and gearboxes).

2017 Hyundai i30 Wagon revealed ahead of Geneva

For £18,695, i30 SE models add 16in wheels, fog lights, a 5.0in touchscreen, a rear park assist feature, rear-view camera and leather steering wheel. Add £950 to that price and SE Nav is available with more features, including as an 8.0in touchscreen, voice control and sat-nav.

Hyundai claimed its new model has completely 'redefined' the i30, and even borrowed some lines from Volkswagen’s history in referring to it as 'the people’s car', which is “accessible, appealing in design and great to drive”.

The i30 will become a family of vehicles, topped by a long-awaited, high-performance N hot hatch version, which will be Hyundai’s first attempt at such a car and also the first driver’s car to come from the company's development centre at the Nürburgring.

Hyundai also revealed that the car was benchmarked against every model in its segment, picking out the attributes of competitors that it wanted to focus and improve on.

The new i30 features a new look, with Hyundai aiming to make its cars more stylish and desirable as its growth in Europe continues. It claims the number one reason for purchase of the previous i30 was design, and Peter Schreyer, the man behind Kia’s  recent revitalisation, now oversees the firm’s designs as it seeks to give its cars greater visual appeal.

The car features Hyundai’s new ‘Cascading Grille’ at the front, which will be introduced across all of its models from the i10 to Santa Fe in the future. 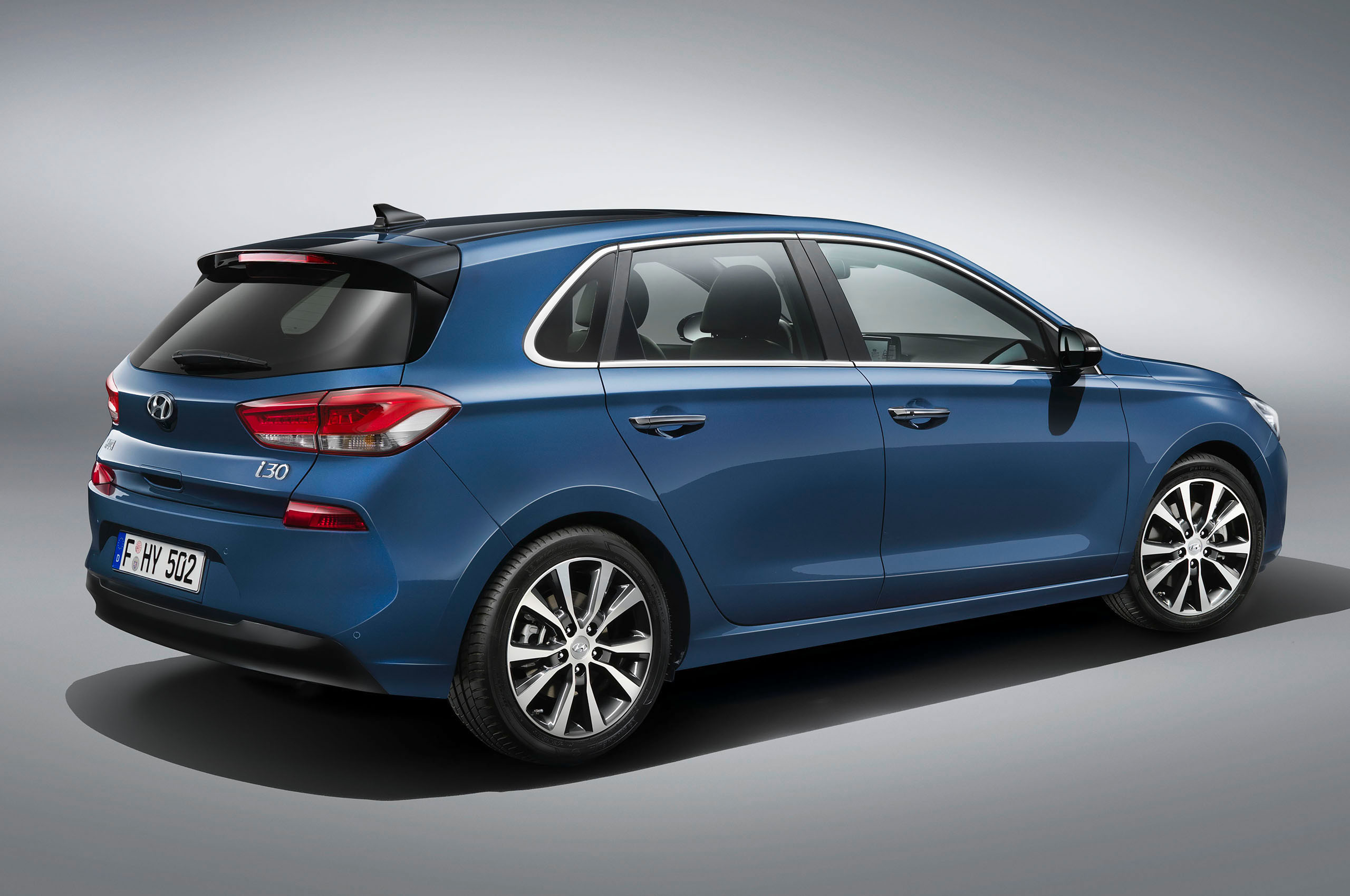 The i30 has been developed in Europe and is built on a completely overhauled version of the existing architecture. It uses MacPherson struts at the front and multi-link suspension as standard at the rear, with ‘performance-orientated’ dampers. Hyundai claims the i30 has “very agile and responsive handling”, as well as a “dynamic ride”. The steering has been made faster and directness has been increased by a claimed 10%, and the brakes have also been beefed up.

Axel Honisch, general manager of Hyundai Technical Centre Europe, said: "It’s a good balance between ride and handling. The ride comfort was at a good level from before, we aim to increase the dynamism, gain some more agility and make it more fun to drive.”

Read more: the Hyundai i30 will spawn a family of models

The body is made of 53% advanced high-strength steel, which is manufactured by Hyundai itself and double the amount of the material used in the previous model. As a result, the body-in-white is some 28kg lighter than that of its predecessor and rigidity has been increased by 22%.

The new i30 is 4340mm long, 1795mm wide, and 1455mm high, with a wheelbase of 2650mm. This means it’s marginally longer and wider than the current model, but also lower, while the wheelbase remains the same. It weighs 1316kg in its lightest form, which is slightly more than the 1306kg of the current i30 despite the lighter body, although more equipment now comes as standard. 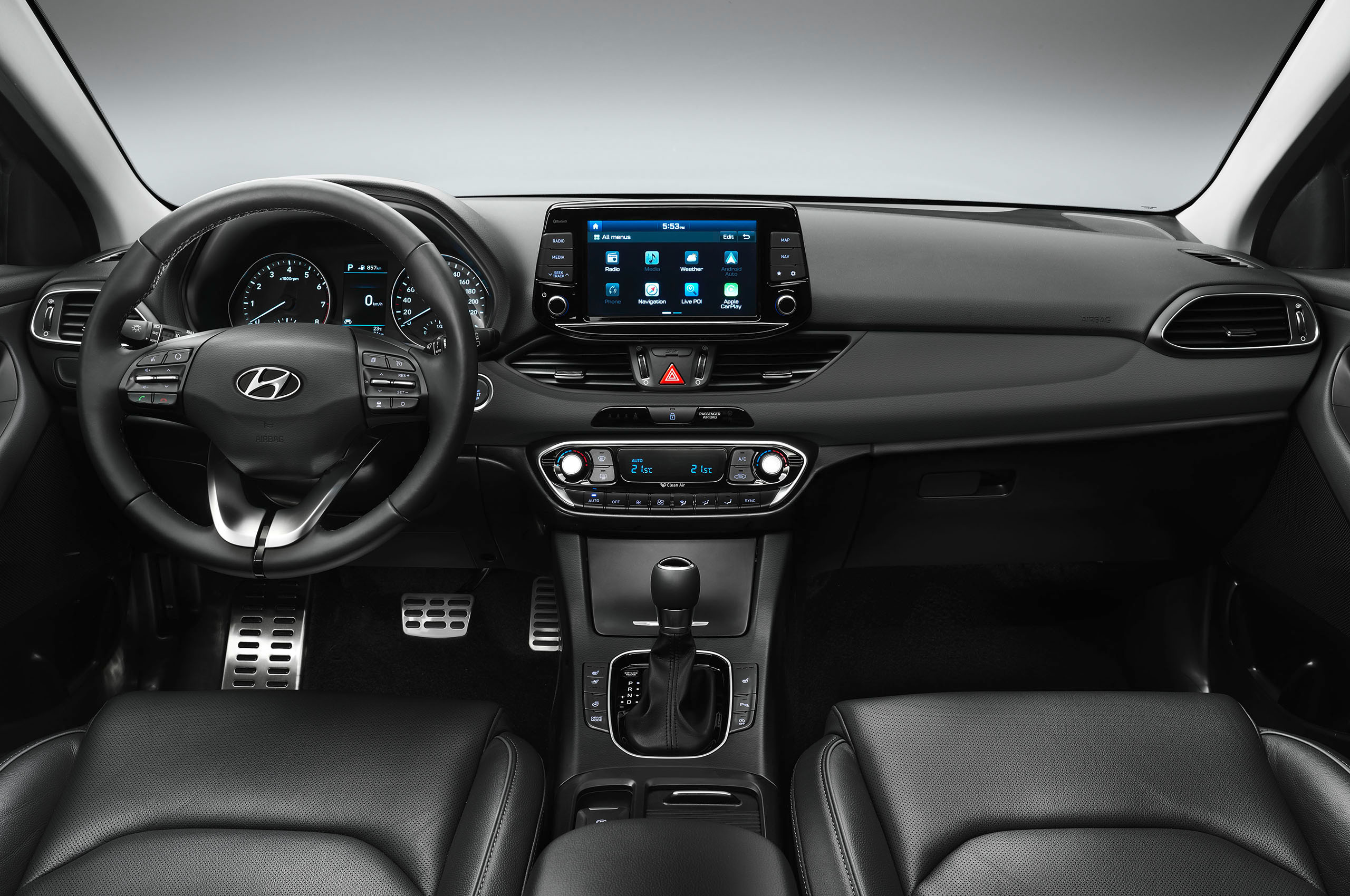 Hyundai is offering the i30 with two petrol engines and one diesel from launch, including a new 138bhp, 178lb ft 1.4-litre turbocharged petrol engine that comes in cars priced from £20,395. Below this sits the entry unit in Britain, which is a turbocharged 118bhp 1.0 three-cylinder unit.

The diesel is a 1.6-litre turbo with 94bhp, 108bhp or 131bhp. Cars with that engine cost from £19,695, and CO2 emissions are as low as 89g/km in its most frugal version. Transmissions include a standard six-speed manual, and an optional seven-speed dual-clutch automatic on the two most potent diesels and the 1.4-litre turbocharged petrol.

That engine provides power for the fastest-accelerating version of the i30, with a 0-62mph time of 8.9sec and a top speed of 130mph.

Other markets get an entry-level naturally aspirated 99bhp 1.4-litre petrol, but this won't be offered in Britain.

Later in 2017, the performance N version will arrive, with a 2.0-litre turbocharged petrol engine with more than 260bhp and a top speed of around 155mph. This model is understood to be called RN30, as indicated by a trademark application made by Hyundai last month. 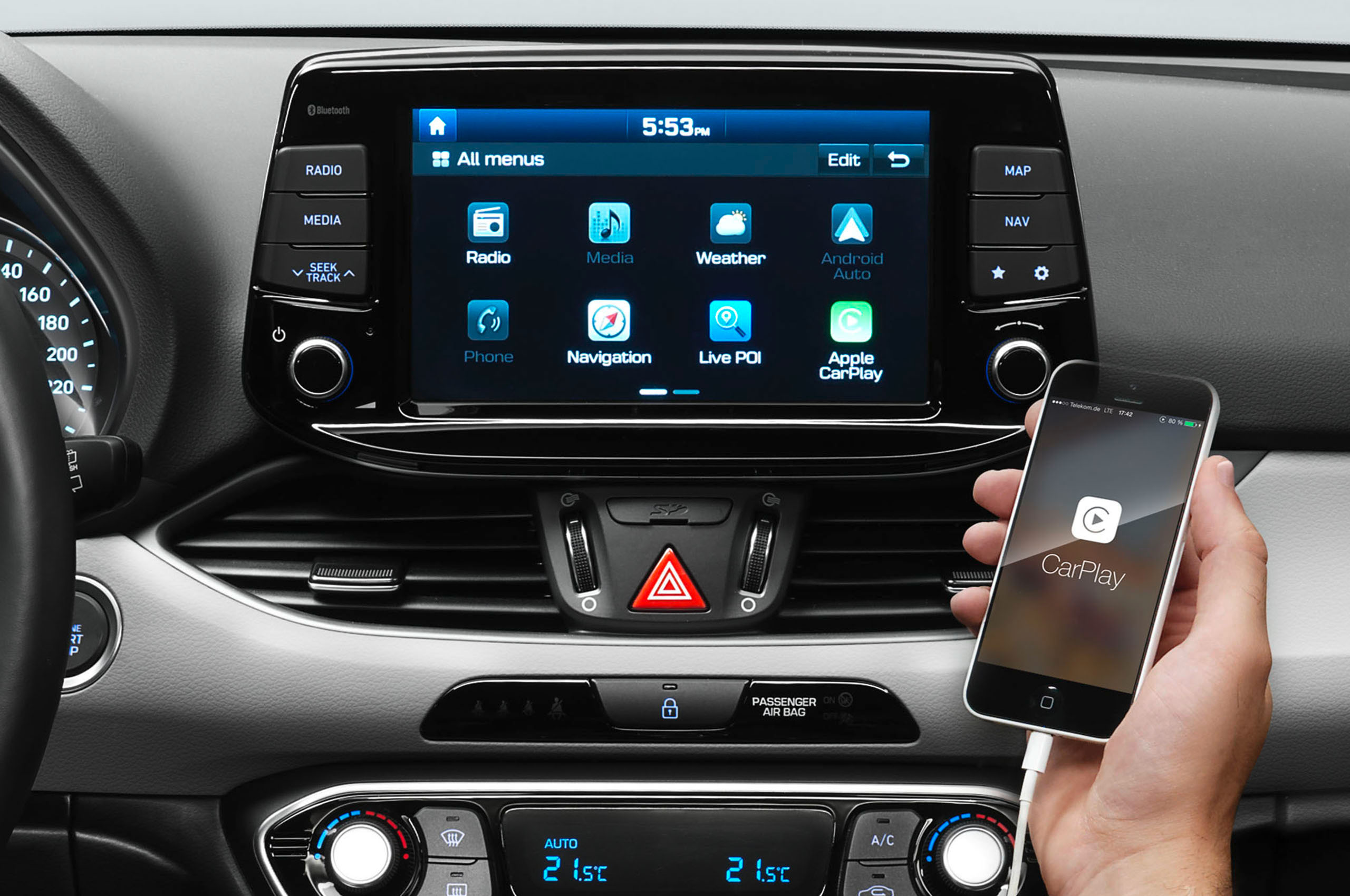 Hyundai has equipped the i30’s interior with reduced switchgear and an optional 8.0in ‘floating’ touchscreen atop the centre console (a 5.0in screen is standard) to control infotainment and other functions. The new car is compatible with both Apple CarPlay and Android Auto for smartphone integration, there's a wireless charging mat for smartphones and the TomTom sat-nav comes with a seven-year subscription to TomTom Live, which offers real-time traffic updates among other functions.

Interior space is claimed to be class-leading, with the feeling of roominess being further enhanced by an optional panoramic sunroof which can tilt or slide open. Boot space is rated at 395 litres, rising to a maximum of 1301 litres with the rear seats folded.

Hyundai has also fitted an extensive suite of safety features to the new i30. Included are automatic emergency braking (AEB) and radar cruise control systems and a system that scans for danger when reversing out of places with reduced rear visibility.

Order books open on the 1 March. Cars are provided with Hyundai's unlimited mileage warranty, roadside assistance pack and annual health check - all of which are offered for a five-year term. Additionally, a 12-year anti-corrosion warranty is provided.

Read our review of a Hyundai i30 pre-production prototype here.

I prefer current model design and slimmer width of 1780 mm . Both Hyundai & Kia need to drop silly flex steer and improve ride comfort & steering feel which improves with better tyres e.g. Michelin X Climate. Forget 17" wheels stick with 15"/16". I find the 7 speed dct box on my Kia Ceed to be excellent . New models must come with space saver wheel that has been dropped on the Neeroo. Instrumentation on the CEED is very poor and requires complete overhaul background dials should be white with black numerals.
highfidelity 21 September 2016

I prefer current model design and slimmer width of 1780 mm . Both Hyundai & Kia need to drop silly flex steer and improve ride comfort & steering feel which improves with better tyres e.g. Michelin X Climate. Forget 17" wheels stick with 15"/16". I find the 7 speed dct box on my Kia Ceed to be excellent . New models must come with space saver wheel that has been dropped on the Neeroo. Instrumentation on the CEED is very poor and requires complete overhaul background dials should be white with black numerals.
highfidelity 21 September 2016

I prefer current model design and slimmer width of 1780 mm . Both Hyundai & Kia need to drop silly flex steer and improve ride comfort & steering feel which improves with better tyres e.g. Michelin X Climate. Forget 17" wheels stick with 15"/16". I find the 7 speed dct box on my Kia Ceed to be excellent . New models must come with space saver wheel that has been dropped on the Neeroo. Instrumentation on the CEED is very poor and requires complete overhaul background dials should be white with black numerals.
View all comments (33)