BACK TO ALL NEWS
Currently reading: 429bhp Mercedes-AMG CLS 53: first sighting ahead of Detroit reveal
UP NEXT
2021 Jaguar XF Sportbrake: facelift previewed in new images

Mercedes-AMG is just one month away from introducing a new petrol-electric hybrid line-up that'll open with a 429bhp CLS 53 model.

Due to be revealed at the 2018 Detroit motor show in January, the hybrid four-door coupé is part of the latest-generation CLS line-up that was launched at the recent LA motor show and kick-starts a range that'll sit below AMG's 63-badged models.

The CLS 53, spotted testing on the public road for the first time, is powered by a 3.0-litre straight six engine, as used by AMG's 43 models, in conjunction with a 67bhp electric motor to produce a total of 429bhp.

The loss of the V8-engined CLS 63 clears space for the AMG GT four-door that’s due in 2018 as an entirely different model, inspired by the GT Concept of the 2017 Geneva motor show. The GT four-door will use a twin-turbocharged V8 engine, borrowed from either the AMG GT or E63, with a hybrid range-topper producing around 800bhp.

The hybrid CLS is expected to come with regenerative braking technology to help replenish its lithium ion batteries when on the move. This technology is already in use elsewhere in Mercedes’ range and would come as part of 48V electrical architecture.

The CLS 53 development car caught in the video above offers few clues as to what design changes we can expect with the AMG model. Most likely, it'll receive AMG wheels, different bumpers and a lower ride height, but the car's luxury focus should ensure the changes will be discreet.

Following the CLS 53, an E53 will be launched with the same six-cylinder hybrid powertrain. This will be the only powertrain available on AMG coupé and convertible E-Classes, while larger saloon and estate models will remain as E63s with V8 engines.

AMG boss Tobias Moers confirmed to Autocar in LA that the '53' nomenclature will feature exclusively on AMG models that use petrol-electric hybrid powertrains. Recent sales from Porsche, which has sold 60% of its latest Panamera in hybrid form, show that global market demand for high performance hybrids is surging. 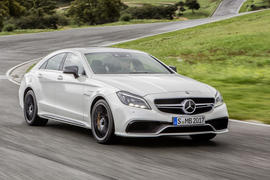 Thought this as a show car

Looked pretty poor, like a Kia/Hyundai Exec saloon. No doubt engine will be great. But dont think Porsche will be too worried.

So there's going to be a new

So there's going to be a new CLS and a new, 'entirely different' AMG 4 door. Really?? Does this make sense to you? I fear Autocar is being taken in by PR hype here.

You do understand that you loose credibility when you keep on constantly doing stuff like this.

I think you already knew the answer Mr Tuga :-)  There ain't no straight 6 and certainly not 43 of'em !!

There ain't no straight 6

Thank you for updating/reviewing the article Autocar.

Hybrid is the way...

8 August 2017
A simple petrol hybrid (not plug in) - like Prius but made in Germany hence offering more fun along with 70-90mpg is what is needed.

I think you are correct. perhaps they can do something about the boot as well and not have that awful ledge which restricts both C and E plug-in hybrids.

This will probably be

This will probably be perfectly nice.  But it is no AMG.