BACK TO ALL NEWS
Currently reading: New Mercedes-AMG GT Concept to make production in 2019
UP NEXT
Ford backs call for European ban on new ICE cars from 2035

The Mercedes-AMG GT Concept has been revealed, previewing an upcoming 800bhp plus petrol-electric hybrid-powered production model planned for UK sale in 2019.

Unveiled at the Geneva motor show, the uniquely styled four-seater has been conceived to complement the company’s existing two-seat GT sportscar in what Tobias Moers, chairman of AMG, says will be an expanded range of dedicated AMG models to be offered alongside traditional performance variants of standard Mercedes-Benz models in future years.

“With the GT Concept we are giving a preview of our third completely autonomously developed sports car, extending the AMG family to include a four-door variant,” says Moers.

The low-slung GT Concept, whose unveiling forms part of AMG’s 50th-anniversary celebrations, draws various styling cues from AMG’s two-year-old GT sports car, most notably its so-called Panamericana grille and thin, horizontally positioned LED tail lamps. They are combined with a new design lineage that is claimed to provide a glimpse of how the exterior styling of Mercedes-Benz’s future production models is planned to progress.

But, while the GT sports car sits on its own unique aluminium platform structure, the production version of the GT Concept has been conceived around a specially modified version of Mercedes-Benz’s MRA platform, as found beneath the latest C- and E-Class and set to be adopted by the next CLS and a new S-Class due out in 2020. 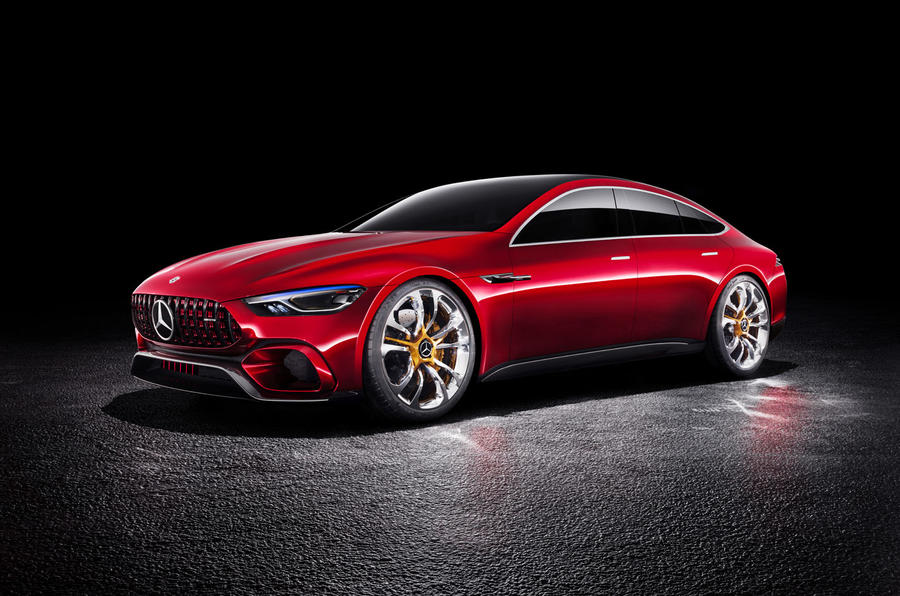 At the heart of the new fastback concept constructed to preview AMG’s second dedicated production model is a new petrol-electric hybrid driveline, developed in partnership with the German car maker’s High Performance Production division and bearing the name of its newly created electric car division though its EQ Power designation.

The hybrid unit combines AMG’s twin-turbocharged 4.0-litre V8 petrol engine with an electric motor to deliver a combined system output which Moers puts at “up to 600kW”. This equates to 805bhp, topping the output of the most powerful of AMG’s existing models, the GT R, by a stunning 228bhp.

AMG says the GT Concept’s electric motor is networked with a combination of extremely light batteries that sees it deliver “an impressive electric range” together with a claimed 0-62mph time of “under 3.0sec”. The operating strategy of the new petrol-electric powerplant has been derived from the hybrid unit used by the Mercedes-Benz F1 team, with the battery charged whilst the car is being driven, both through brake energy recuperation and the aid of the combustion engine.

Stylistically, the GT concept treads new ground for Mercedes-Benz, both in proportion and detail. Created under the guidance of Mercedes-Benz design boss, Gorden Wagener, it adopts the relaxed surfacing treatment already adopted by the latest E-Class Coupe, eschewing the heavily structured look that has characterized the German car maker’s production models in recent years in favour of smoother and largely unadorned surfaces.

“The GT Concept embodies the most extreme expression of our design idiom, and underlines the autonomous profile of AMG as a performance brand,” says Wagener.

The six corner Panamericana grille, with vertical slats overlaid on top a newly designed insert is angled forward to give the front-end of the new AMG model an outwardly aggressive shark nose style appearance. Underneath the grille is a newly developed version of AMG’s so-called A-frame bumper graphic complete with an integral central splitter element and three large cooling ducts featuring electronically controlled shutters which are claimed to improved aerodynamic and thermal efficiency.

The trapezoidal headlamps, imbued with new nanofiber technology that provides 3D illumination, reflect a new design theme set to appear on the next generation of models from the German car maker that Wagener refers to as the “predator face”.

Further back, the GT Concept features four frameless doors, a fixed B-pillar and Panoramic glass roof. The side window graphic, meanwhile, picks up on the theme already seen on Mercedes-Benz’s more recent coupé models. Hunches over the rear wheel houses also endow the new AMG model with a dose of visual muscle.

Practicality concerns have been addressed by lengthy rear doors, whose aperture runs well back over the sizeable rear wheel houses to aid entry to the rear. The GT Concept also features a large fastback style tailgate similar in style to that gracing the GT sports car, providing uninterrupted access to a deep boot.

The rear is dominated by a pair of thin, horizontally positioned tail lamps and a large, centrally mounted brushed aluminium tailpipe set within a multi-channel diffuser element within the lower section of the rear bumper.

Although the GT Concept’s stylistic similarities with the two-seater AMG GT are many, the production version is being developed not on the sports car’s aluminium spaceframe-style platform architecture but instead on Mercedes ‘MRA’ platform which several of AMG’s super-saloons already use.

But boss Moers warned not to under-estimate the amount of chassis technology from the AMG GT’s toolbox that could be applied to the ‘GT4’.

“Really, MRA just gives us a floorpan; it doesn’t limit us. The new car can have its own wheelbase and track widths, and can have the same kind of active aerodynamics, four-wheel steering and special ESP systems that you see on the AMG GT.”

From a styling standpoint, Moers suggested the finished ‘GT4’ would be very much like the GT Concept on the Geneva show stand. “The proportions of the production car (codenamed X290) really aren’t so different from those of the show car you have seen today,” Moers confirmed.

While unconfirmed at this stage, various engineering solutions developed for the production version of the GT Concept are expected to feature on the successor to the SL, development of which has been entrusted to AMG in a move which, Mercedes-Benz officials say, is aimed at injecting the next generation of the company’s traditional up-market roadster with heightened dynamic appeal.

Speaking at the car's unveiling, Ola Källenius, head of research and development said: "This car is a predator, and with its long nose and sleek body it has got a presence."

Watch the Mercedes-AMG GT take on the Porsche 911 GTS in the video below.

Niche-busting product from the Germanic trios - this time a Merc-AMG fighting saloon to rival the Porsche Panamera, Audi A7/S5 sportback and others you know what car it competes. This is a much better style-resolved car than the Panamera... oh wait it looks like Merc-AMG is trying a create a Aston Rapide, bratwurst style!
Saucerer 7 March 2017

Yet another niche created by either Audi, BMW or Mercedes, this time a 4 door sports car/supercar. Somehow I don't think Jaguar will follow suit with a saloon F-Type. Makes you wonder what Audi, BMW and Mercedes will come up with next. A 2 Series Active Tourer coupe? A R8 Allroad? A GLE sedan, or even an estate version?
Mikey C 7 March 2017

At some point, this expansion

At some point, this expansion of ranges will surely come to an end? the pursuit of every niche, coping every unique product that their (German) rivals produce...
View all comments (5)