BACK TO ALL NEWS
Currently reading: 2017 Mercedes-Benz E-Class Coupe makes public debut in Detroit
UP NEXT
Bentley Batur: new Mulliner car to arrive on 21 August

New coupé line-up will be headed by an AMG E 50 with a novel 450bhp powertrain; AMG Line trim standard for rest of range
Open gallery
Close

The new Mercedes-Benz E-Class Coupé has made its public debut at the Detroit motor show one month after order books opened in Britain.

The two-door model is priced from £40,135, and first deliveries are expected to arrive in April. It's offered in the UK exclusively in AMG Line trim, meaning even the most basic models will come with a lengthy list of kit and 19in wheels as standard.

The car on show in Detroit is an E 400 4Matic, but that model will hand the range-topping spot to an AMG-engineered E 50 4Matic mild hybrid model, which is due to be unveiled during the latter half of the year.

To be launched as part of this year's extensive 50th anniversary celebrations planned for Mercedes’ AMG performance arm, the potent coupé will be among the first models to receive the German car maker’s all-new M256 in-line six-cylinder petrol engine that is set to have its debut in the Mercedes-Benz S-Class.

Running a conventional turbocharger in combination with an electrically driven compressor and a 48V electrical system, the 3.0-litre unit delivers 402bhp in standard guise. However, a series of tweaks, including higher boost pressure and internal modifications, are set to yield around 450bhp for the powertrain’s application in the E 50 Coupé.

The new E-Class Coupé has been engineered from the ground up for a more upmarket positioning than that of its predecessor.

With the adoption of Mercedes’ latest MRA platform, the E-Class Coupé has grown both in size and positioning. Its length is up by 123mm to 4826mm, width has extended by 74mm to 1860mm and height has increased by 32mm to 1430mm. 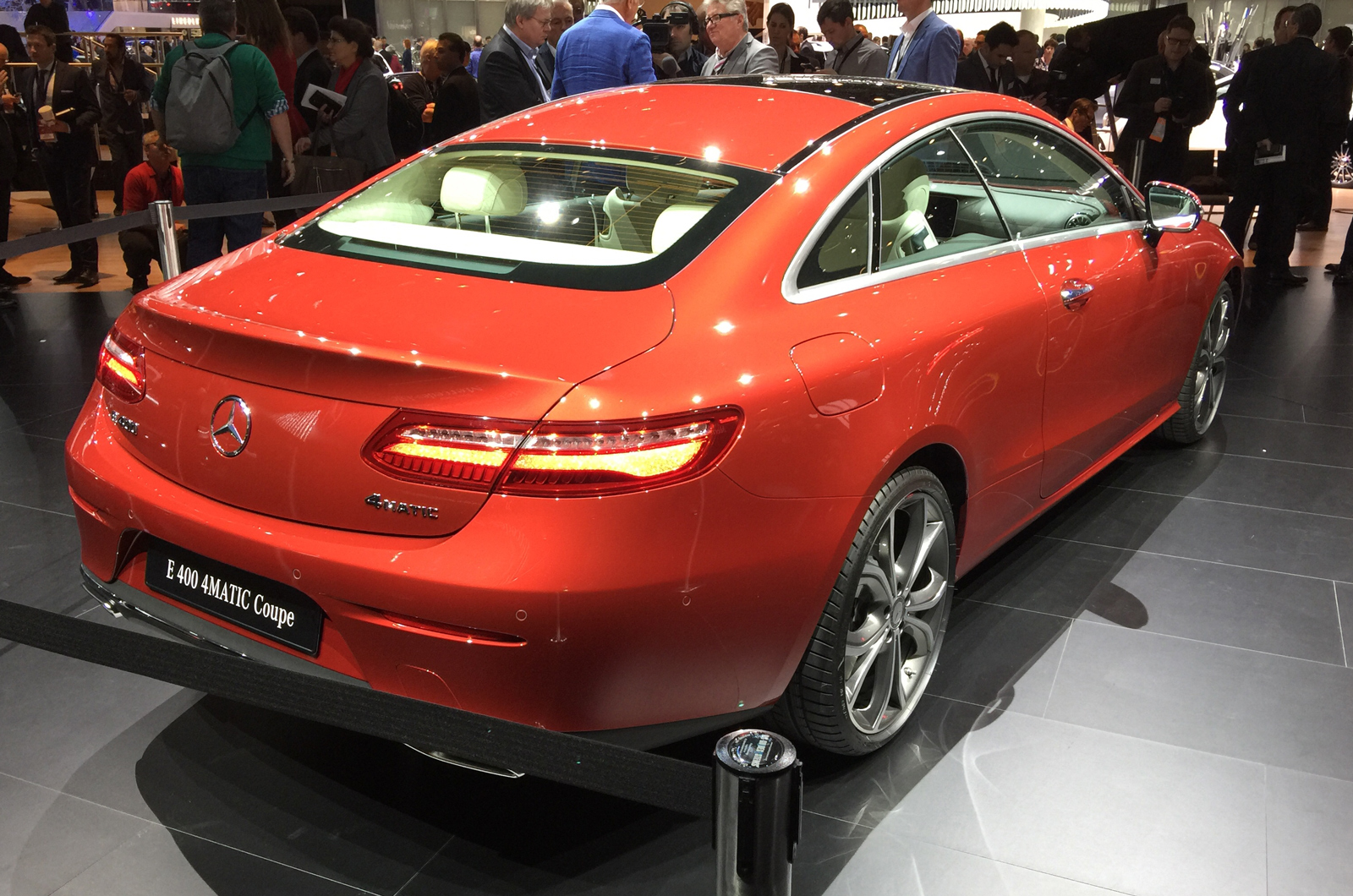 The wheelbase has also been extended by 113mm over that of its predecessor at 2873mm, while the front and rear tracks are up by 67mm and 68mm respectively, at 1605mm and 1609mm.

The design of the four-seat cabin leans heavily on that of other new E-Class models, but it has a number of bespoke touches, including newly designed air vents, automatically extending feeder arms for the front seatbelts and exclusive trim panels.

Key elements include two optional 12.3in displays for the instruments and infotainment system, the latter being operable either via touchpads on the steering wheel or a rotary control and touchpad on the centre console.

Outside, unique design features include a twin-blade grille and frameless doors. 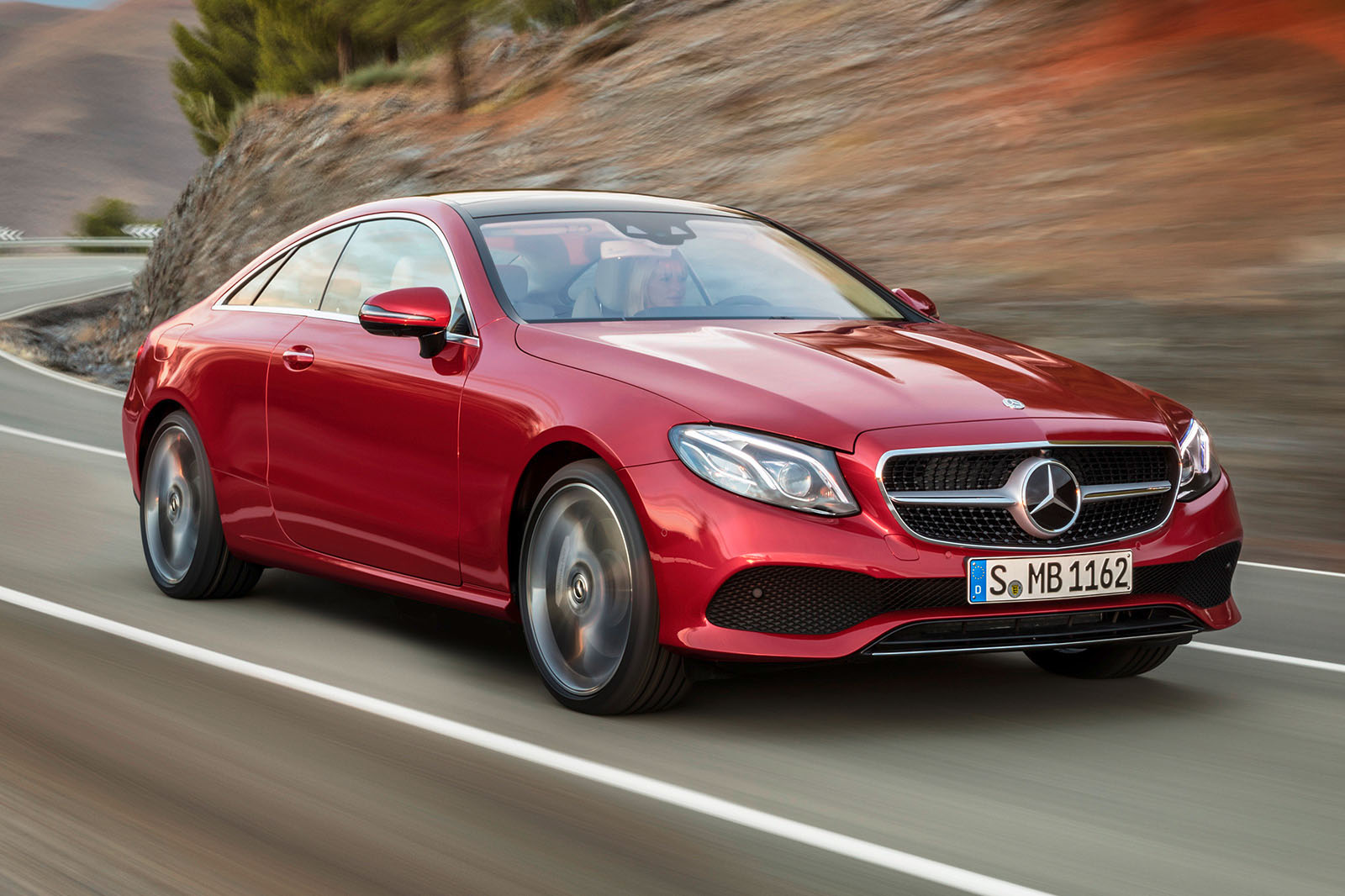 Three E-Class Coupés are offered at launch in the UK, with the choice of one diesel and two petrol engines, ranging in power from 191bhp to 328bhp.

It is joined by the mid-range E 300 Coupé, which is powered by a turbocharged 2.0-litre four-cylinder petrol engine producing 242bhp. Prices for cars with this engine start at £41,025. 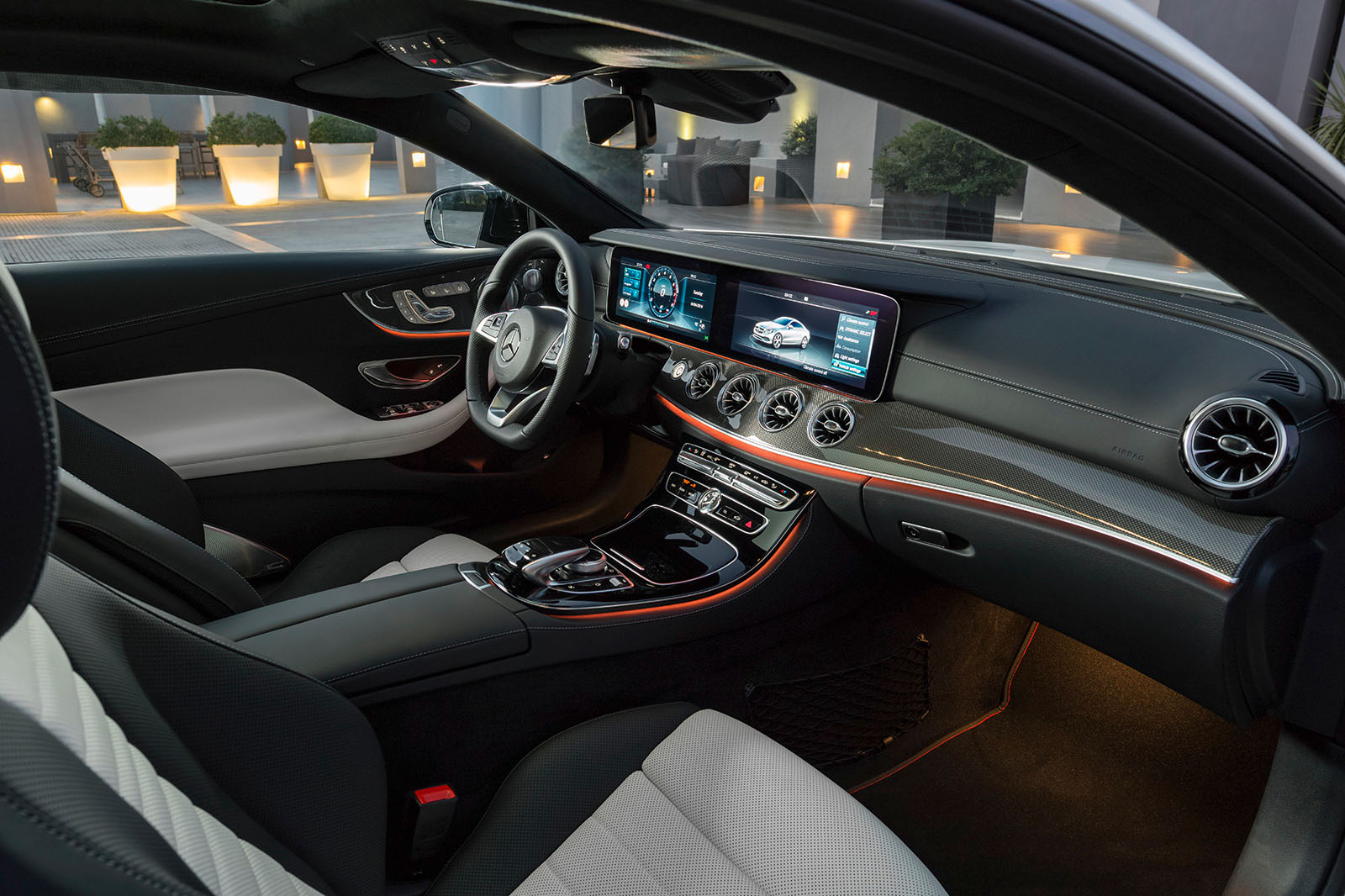 In combination with the Dynamic Body Control and Air Body Control suspension, the E-Class Coupé also gets Mercedes’ Dynamic Select system, which allows the driver to alter the characteristics of the car between four modes: Eco, Comfort, Sport and Sport Plus.

The fixed rear quarter window is such a glaringly obvious design compromise that it should never have been approved in a supposedly 'stylish' coupe. It looks as odd as the previous coupe (and the 1970s SLC) but at least the previous coupe had a better resolved rear end.
The point of the coupe is design superiority over the mechanically equivalent saloon. Judging by this criterion this coupe fails miserably.
Daniel Joseph 14 December 2016

The fixed rear quarter window is such a glaringly obvious design compromise that it should never have been approved in a supposedly 'stylish' coupe. It looks as odd as the previous coupe (and the 1970s SLC) but at least the previous coupe had a better resolved rear end.
The point of the coupe is design superiority over the mechanically equivalent saloon. Judging by this criterion this coupe fails miserably.

Absolutely agree. Moreover, given how shallow the glazing is at the trailing edge of the rear side window above the wheelarch, I bet there would be an engineering solution involving some rotation of the glass around a pivot in the C-pillar area that would have allowed a one-piece side glass to be used. Mercedes-Benz used to excel at such solutions: remember the wonderful single windscreen wiper on the W124 and W201? I used to own one of the latter and never tired of watching the beautifully engineered mechanism push the wiper blade up into the corners of the windscreen. Finally, when will M-B realise that those horrible plastic nose cones and the crude bonnet shut lines they necessitate will never look elegant?

Finally, when will M-B realise that those horrible plastic nose cones and the crude bonnet shut lines they necessitate will never look elegant?

I don't believe Mercedes is incapable of sorting out its appalling panel gaps (saw an A-class the other day with a super wide gap between bonnet and nose cone). My suspicion is that Mercedes just doesn't bother. For every traditional Mercedes customer who cares about these things, there are two new buyers who don't.
One of my favorite engineering details was the doors requiring only a gentle push to close with a precision click. That disappeared with the W202 when the salesman told me something about a sealed cabin!

It's to allow the rear passenger windows to drop. In the C-Class coupé (or BMW 4 Series or Audi A5), the rear windows are fixed. It looks clumsy because the C-pillar is stretched so far back, necessitating the small extra window. I bet it didn't look that way on the designer's sketches.
The E-Class and S-Class coupés have always been pillarless with opening rear windows.
warpedone 14 December 2016

the S coupe doesn't have that frame on the rear glass and it drops...
disco.stu 14 December 2016

That's true, but the S-Class coupé has a much smaller, shallower and more triangular-shaped rear window, so it can drop in an arc and avoid the wheelarch and other gubbins. The E-Class window is taller and squarer, so it can't do the same.
The old E-Class coupé had exactly the same rear window layout.
View all comments (9)