An image of Mercedes-AMG's hotly anticipated GT four-door model has been leaked onto the internet just two days before its official reveal at the Geneva motor show.

Like certain spotted test cars, the four-door in the leaked image has a fixed rear wing, suggesting it is the most potent version. But the latest preview pictures released by AMG (see below and gallery) show a car with no visible rear wing, suggesting that it is a lower powered version with an active spoiler. The two variants could arrive together in Geneva. 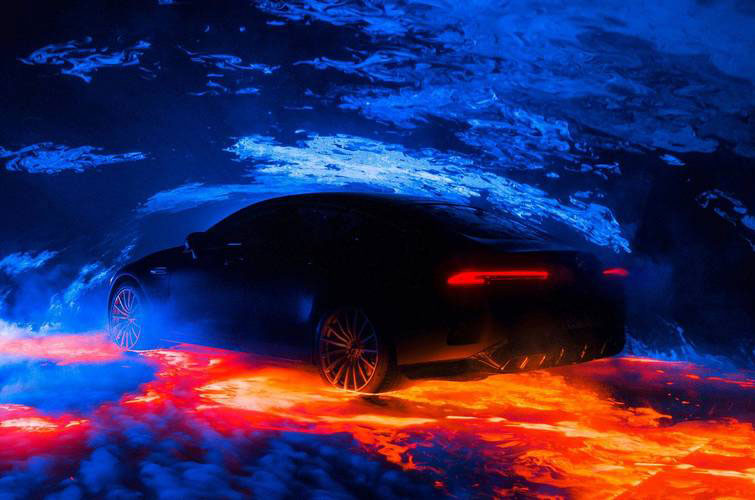 Autocar has previously revealed that engineers from Mercedes' performance arm are working on an even harder version of the model, with sources predicting the variant will have in excess of 800bhp from a hybrid V8 powertrain.

AMG's decision to start development on a hotter GT four-door even before the regular car is revealed comes as part of its new product plan to launch variants sooner into each model's life cycle. In Detroit, where AMG recently launched its new hybrid 53 range, division boss Tobias Moers told Autocar that AMG "never stops with engineering development", suggesting that harder versions are worked on as soon as development on the car they're based on is completed. 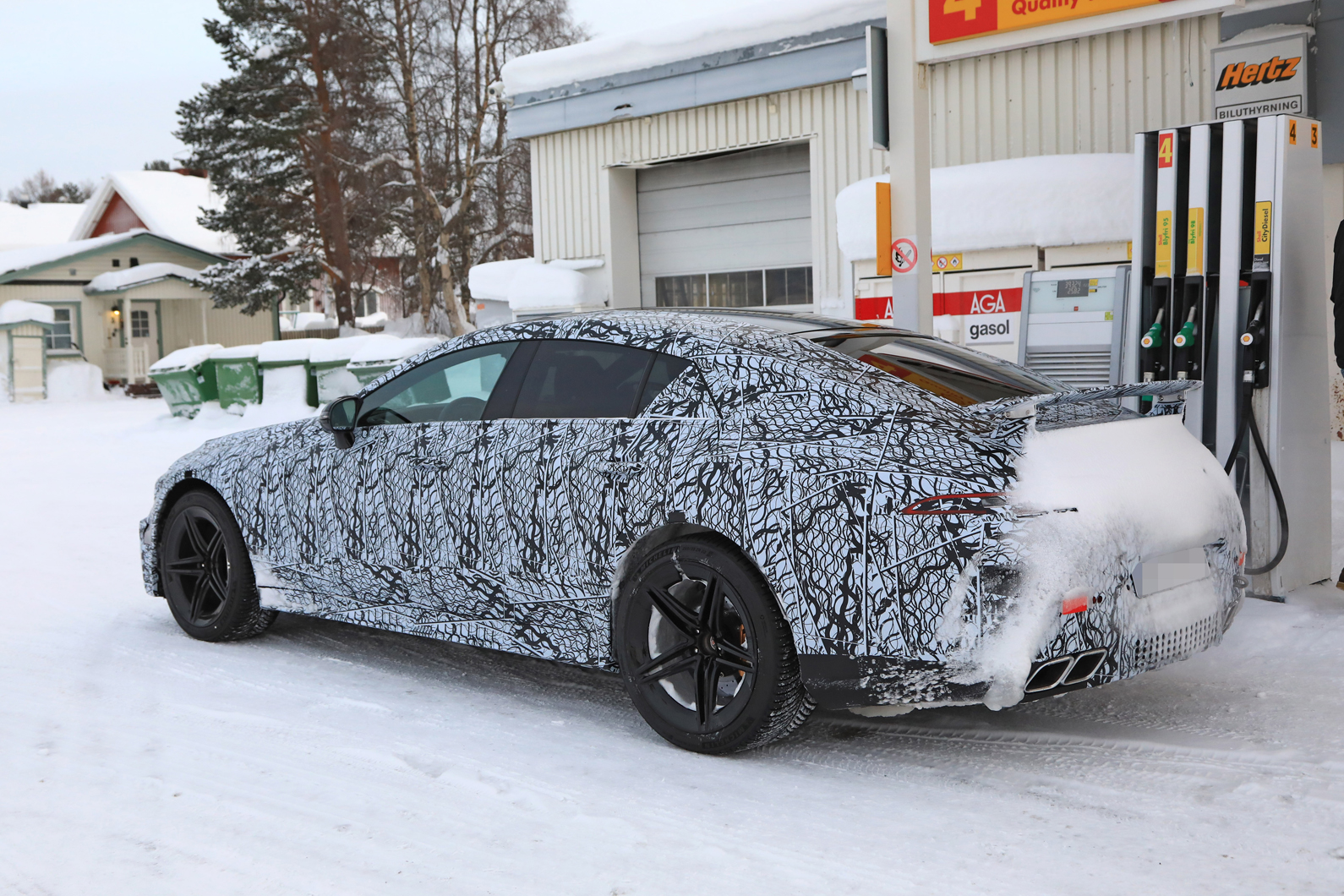 He added that his personal opinion was that the four-door AMG model will be more successful than the company anticipates.

Previewed by the GT concept of 2017, the AMG GT four-door models will come with a range of EQ Power-branded petrol-electric hybrid drivelines featuring differing battery capacities, outputs and electric ranges.

The new Mercedes-AMG model has been conceived as an upmarket replacement for today’s CLS 63 and a rival to the Porsche Panamera. Sales for the production model are scheduled to begin in September 2018. 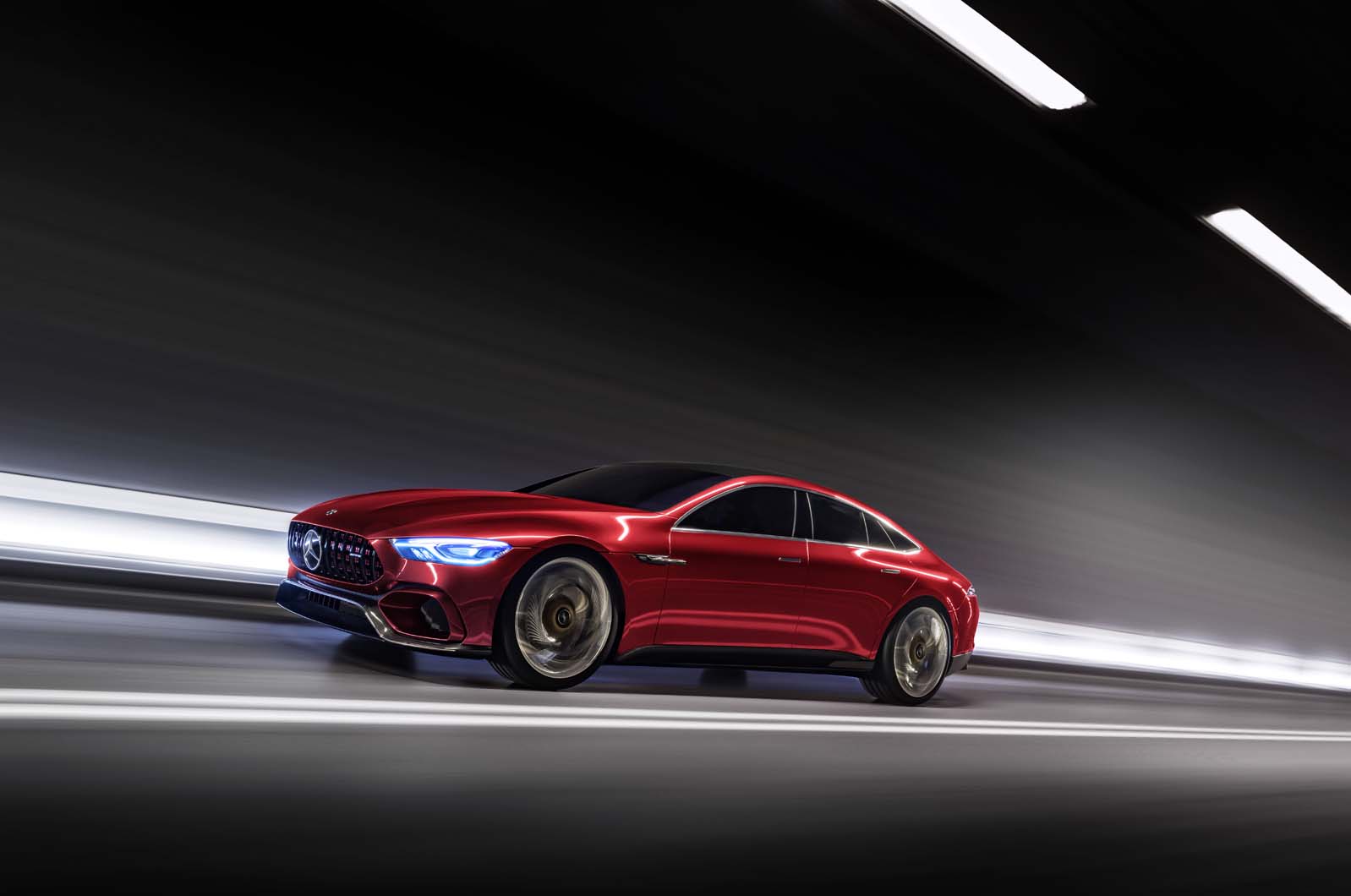 The car will be launched with the same 604bhp twin-turbocharged 4.0-litre petrol V8, nine-speed automatic gearbox and fully variable four-wheel drive system as the latest E63 S 4Matic, upon which it is largely based. However, Mercedes officials have said there are also concrete plans for it to be sold with hybrid drivelines from 2019 onwards - suggesting the spotted harder version could arrive as part of that line-up.

The decision to develop the car's new hybrid driveline with three differing battery capacities will allow Mercedes-AMG to offer the car with varying power outputs and ranges.

Although the finer details are still under wraps, Autocar has been told that the range-topping hybrid model is set to produce the same 805bhp and offer a similar 31-mile electric range as the GT Concept (pictured above and below). 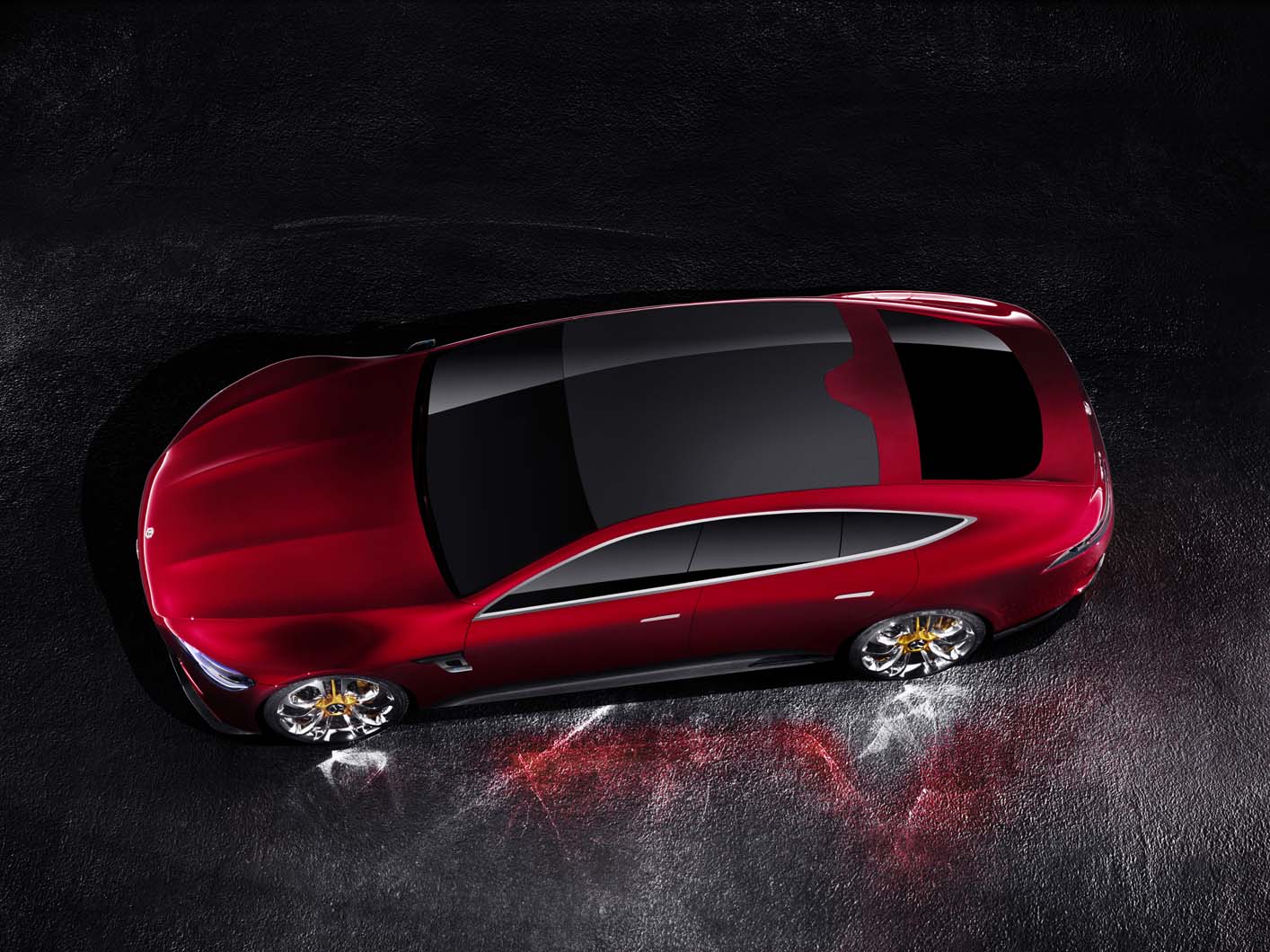 Sources suggest these units' modular nature will allow them to feature in other AMG models, including the successors to the GT Coupé and Roadster.

The hybrid driveline for the production version of the GT Concept uses AMG’s twin-turbocharged 4.0-litre V8 engine, mounted longitudinally up front, in combination with an electric motor sited within the rear axle. The engine can send power to all four wheels, while the motor delivers power exclusively to the rear wheels.

AMG says the motor is networked with a combination of extremely light batteries. These have been developed in partnership with High Performance Powertrains, the British-based AMG sister company behind the 1000bhp petrol-electric driveline of the upcoming Project One hypercar.

The operation of the new petrol-electric powerplant has been derived from the hybrid unit used by the Mercedes-Benz Formula 1 team, with the battery charged while the car is being driven through brake energy recuperation and the aid of the petrol engine. 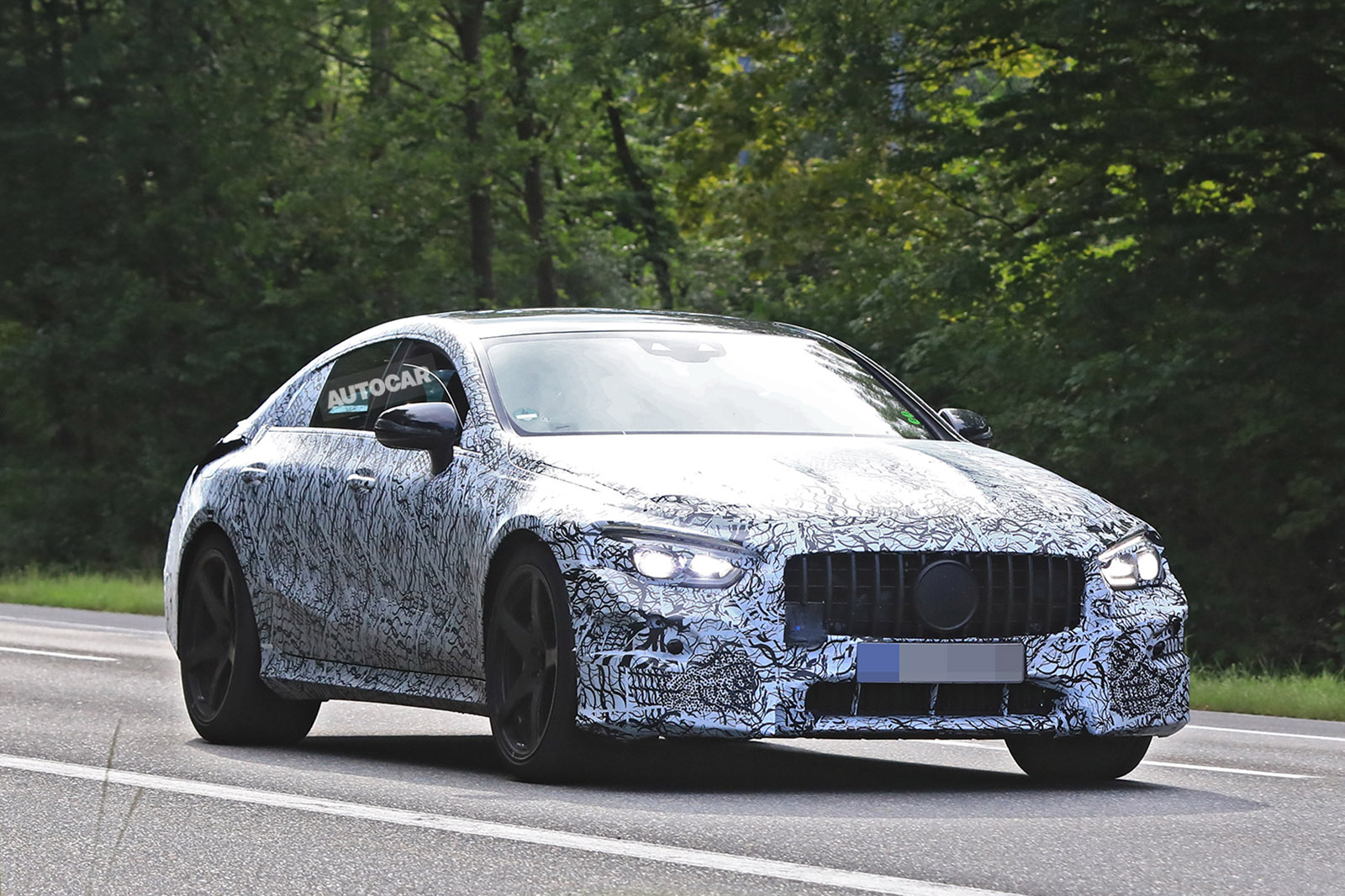 Mercedes-Benz’s entry into the electric Formula E championship in 2018/19 will boost AMG’s development of hybrid and electric powertrains for the future, according to the company's development boss, Drummond Jacoy.

The firm’s recent Project One concept uses a powertrain similar to the hybrid employed by Mercedes in Formula 1.

“We work with Mercedes High Performance Engines who build the F1 engines, and now we’ll align with the Formula E project,” said Jacoy. “The entry is very recent, very now, and we’ve not sorted out exactly how it’s going to work – but there will be a close link to us as AMG.”

The problem with Mercedes ‘same sausage, different length’ approach is I genuinely can’t tell any difference between this and the CLS without going and finding an image of the CLS to compare.

I have to say a fixed wing

I have to say a fixed wing would be shockingly awful on a car like this.  But I doubt it actually is.

Keep this away from the well heeled in America and Donald will get his P45!,,,