From £79,1309
The E 63 is back, and it’s remarkable, with the broadest range of abilities and performance it has ever had
Open gallery
Close

The Mercedes-AMG E 63 S comes a long time after the wider world had its first Lotus Carlton moment. I wonder if it will have another, when will it sit up with a start and say: “A 600bhp, 190mph family saloon car? Are you completely mad?”

Anyway, here is a 600bhp family saloon. There are so many new cars. So many . You’d almost be forgiven for patting it on the head gently, knowingly, as it passes. Another new AMG. Welcome to the world, son, we know your brothers: dominated by their engines, lots of tyre smoke, that sort of thing. Sit yourself in that little niche over there, the one marked ‘hot rod’.

Well, don’t. This car isn’t like other recent AMGs. Well, it is, but it’s not only like other AMGs. There’s a bit more to it than that.

Mechanically, there’s a fair degree of what you know. The basis is the latest-generation Mercedes-Benz E-Class saloon. The design has been given the expected tweaks: it’s subtle, muscular, more pumped up in the wheel arches, where it’s 11mm wider to accommodate a wider track and 265/35 front and 295/30 rear 20in tyres. There’s a diffuser, big exhausts and a lip spoiler on this saloon. An estate will follow late next year.

Under the resculpted bonnet is the latest iteration of AMG’s 4.0-litre, twin-turbocharged V8. New for this E 63 is that the ‘hot’ turbos, which sit within the vee rather than down by the sides of the cylinders, where the centre of gravity would be lower, are twin-scroll units. So they have two tubes through them, each one putting air to two cylinders. So yes, while the centre of gravity is higher (bad) and the air perhaps hotter (also bad), the paths from turbo to cylinder are much shorter, which makes for improved throttle response times (good). It keeps the engine more compact, too. There are also two power outputs: 563bhp as standard, or 603bhp in the S version. 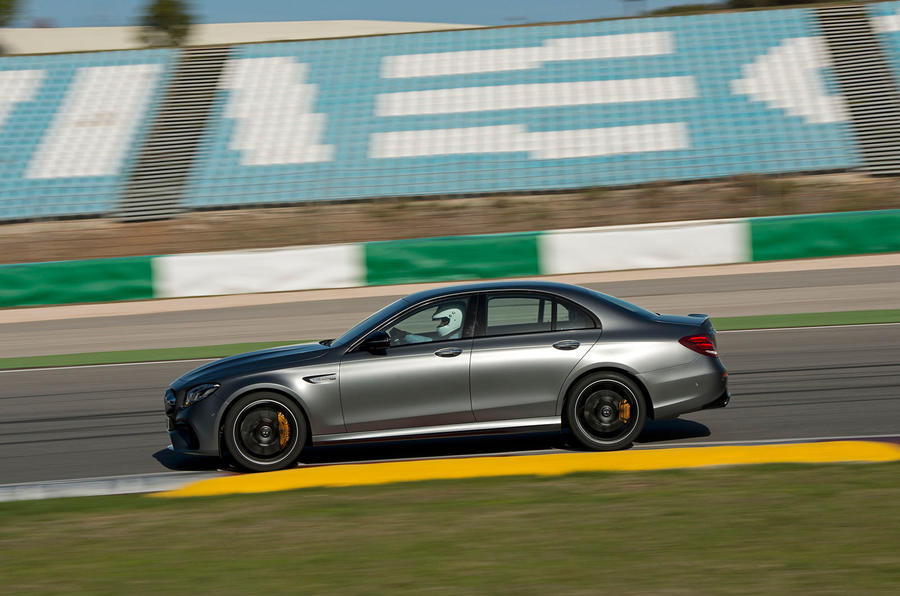 The V8 drives through a nine-speed automatic gearbox, the first time Mercedes’ nine-speed ’box has been engineered to cope with this much torque. And if the E 63 S makes a lot of anything, it’s torque: 627lb ft of it, from 2500-4500rpm. It’s an automatic transmission rather than a dual-clutch unit, but instead of a torque converter, it gets a wet clutch.

In right-hand-drive versions of the last E 63, power went only to the rear wheels, but in other markets the car was mostly four-wheel drive; in fact, globally, 90% of all E 63s sold drove through all four wheels. This time they all will, even the right-hookers. At the back of the gearbox is a clutch, through the middle of which runs a propshaft to the back wheels. In everyday mooching, the E 63 is rear-wheel drive. But as the clutch starts to engage, as much as 50% of the power will go to the front. Theoretically, were the rears tyres on ice and the front tyres on fly paper, all power would go to the fronts, but practically, 50/50 is the maximum split.

At the back, meanwhile, there’s a limited-slip differential, which is mechanically controlled on the non-S variant but electronically controlled on the S. There are also a number of drive modes, culminating in Race, after which you can switch out the stability controls to either Sport mode or all off, and after you’ve done that you can enter Drift mode, which basically always disconnects the front wheels, to let the E 63 do what AMGs have been doing for years: smoking up tyres.

Other things to note, before we move on? The bodyshell has been stiffened with the addition of a couple of braces. AMG won’t say exactly by how much; apparently it’s not as simple as that, because it depends where you measure it. And there are air springs all round. Prices won’t be announced until early next year, but an S is likely to be around £83,000.

Most buyers opt for the saloon, impossibly cool though fast estates are. And all in, this four-door’s kerb weight is 1955kg. Yet still this is a car with a 3.5sec 0-62mph time and a top speed of 186mph if you spec the AMG Driver’s Package. Exactly how much is too much?

Not this much, I’ve decided. I’m trying to make ‘the power of a McLaren F1’ an accepted unit of measurement, like the length of a double decker bus or an area the size of Wales. Anyway, the E 63 has it, more or less. Chances are it’ll deliver more torque to the wheels, more of the time, than the McLaren.

But you don’t have to use it all, and the E 63 is a rather lovely thing on the road even if you choose not to. The engine’s response is good even in the less angry driving modes and the steering is weighty and accurate, while the suspension is firm enough that in the UK it might be approaching (if I can use this word) nuggety.

It’s good fun, in other words, and certainly comfortable and controlled enough. There’s insurmountable grip and traction for all road conditions, but like all things performance these days, you’ll be wanting a circuit to get the best out of the E 63.

On track, I’m expecting it to be a hot rod like the previous-generation E 63 was at its launch. Manage the front end so it doesn’t understeer, get back on the power, feel it squirm and you’re away. Something less agile than the C 63, at any rate. 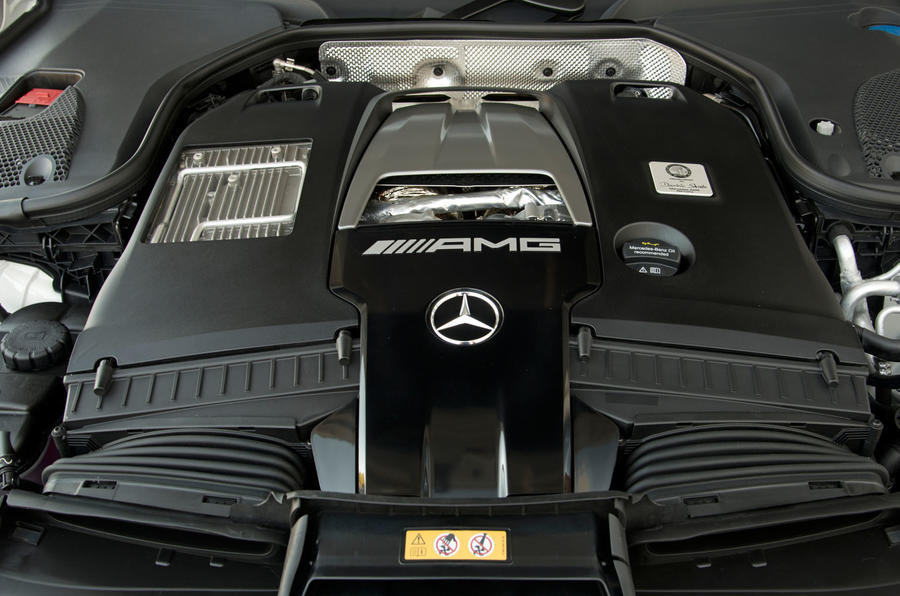 But it turns out that the new E 63 is genuinely remarkable on a circuit. Astonishingly. Not because of the power – you expect that, if not the quickness of the throttle response for a turbo – and not because of the way the brakes (if carbon-ceramics are fitted) just don’t give up. No, the exceptional thing is how agile it is for a car that, with a couple of options on it, must tip the scales at two tonnes.

You can turn in at a rate that would make most big front-engined cars just wash outwards. A lot of small front-engined cars too, come to that. But the E 63 turns really pleasingly, and if you play with the throttle, easing it on or off, there’s a genuinely lovely balance. With the 4Matic four-wheel drive system on, and because its bias is mostly to the rear, the E 63 will still steer at the back like a rear-driver. But the pace it can maintain around a track is extraordinary – and seriously good fun.

And then, of course, there’s Drift mode. Funny old phrase, drift mode; it’s not like there’s some clever electro-mechanical trickery going on with the four-wheel drive system. It just disconnects the clutch for the front wheels and leaves the E 63 in the kind of form to which right-hand drive buyers have been accustomed for ages. And in that form the E 63 drifts and drifts and drifts for Germany. Puerile. Stupid. Silly. Yes, I know it is. But flippin’ entertaining. 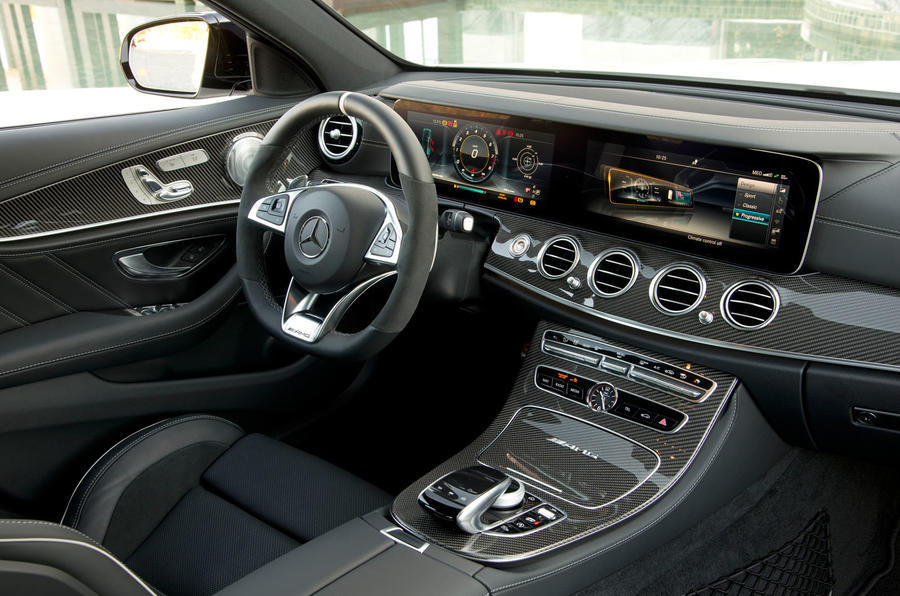 The dynamic experience suggests you ought to be interested in one, if you’re in the market for a car like the E 63 S, which means you might also consider an Audi RS6, Porsche Panamera Turbo or BMW M5.

What about some prosaic and more relevant E 63 points though? The interior feels lovely, as it does in regular E-Classes. There’s a digital instrument pack, and although one or two of the dials look a bit too much like a dartboard for my taste, there’s no denying you can put a shedload of information up there. Then there’s the massive central screen, which displays one of the best infotainment systems on the market, and the front seats, which are exceptionally supportive yet very comfortable. Plus it’s big in the back seats and in the boot.

More prosaic things again? On light throttle openings the V8 becomes a V4, and if you just pootle around the automatic gearbox soon shifts into top (albeit marginally less smoothly than a torque-converter auto), so combined fuel economy is 31mpg.

And that, let’s face it, is how you’ll drive it most of the time. A large executive saloon that’s marginally less refined than a big diesel executive saloon but still one that’ll cosset and nurture and ease your troubles away with a gentle woofle at the end of a long day. And sometimes, just sometimes, it’s a 603bhp supercar. More than you need, of course, but there are times when too much is just enough.

Exactly how much is too much?

Sorry about that, laggy

Sorry about that, laggy browser
View all comments (9)