BACK TO ALL NEWS
Currently reading: 2021 Volkswagen Arteon Shooting Brake spotted undisguised
UP NEXT
New Ora Funky Cat touches down at £30,495 with 193-mile range

Volkswagen will update its Volkswagen Arteon executive fastback later this year and add a new 'shooting brake' estate variant to the line-up.

Seen undisguised for the first time since Autocar first revealed it was being considered in 2017, the Arteon Shooting Brake retains the low front end and long wheelbase of its sibling, with visual differences limited to its longer roof and upright rear end.

While the Shooting Brake, like the fastback, will closely match the platform-sharing Passat Estate in length, width and wheelbase, it will occupy a different segment of the market, with evidently sleeker design cues and a more upmarket interior.

The prototype's window line has been disguised to resemble that of the Passat, although it appears to be more curved at the rear. 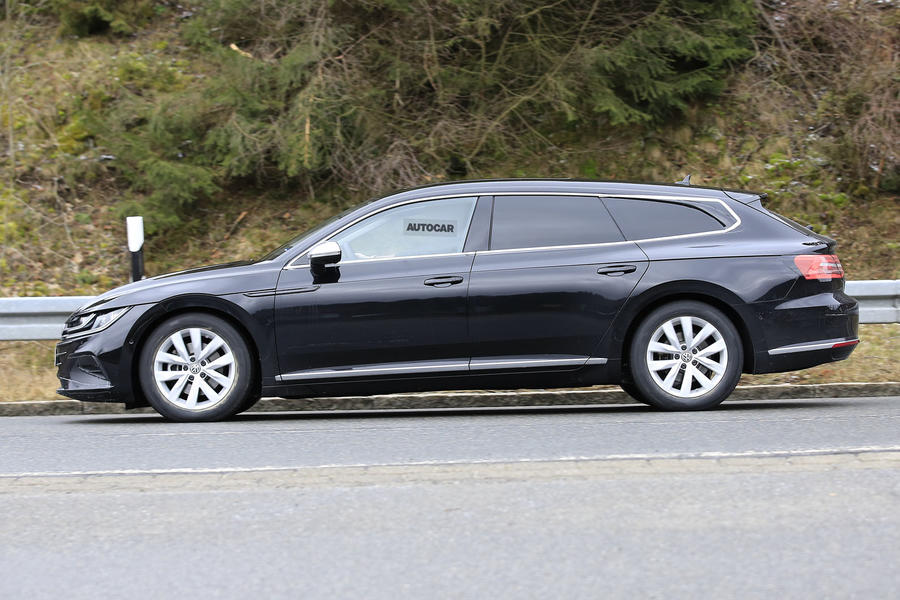 It's likely that the current Arteon's infotainment system and control panel – largely shared with other MQB platform-based cars – will make way for the all-new touchscreen system that made its debut in the new Volkswagen Golf.

The prototype's styling also suggests that the Arteon's facelift will bring only subtle design tweaks. The current car's distinctive crescent-shaped headlights remain, as do its smooth tailgate and clamshell bonnet, but there look to be reshaped brake lights and a reconfigured front splitter.

Engines remain unconfirmed, but the Arteon Shooting Brake will likely be available with the 2.0-litre petrol and diesel options offered in the saloon, with an optional four-wheel drive system. A hot version from Volkswagen's R division will arrive later, powered by a 329bhp evolution of the familiar EA888 turbocharged 2.0-litre four-cylinder petrol engine.

The Arteon Shooting Brake will be among the last non-electrified new cars launched by Volkswagen, as it shifts focus to expanding its ID electric vehicle family. Late last year, the firm unveiled the ID Space Vizzion as a preview of an electric replacement for the Passat Estate.

Difficult to see why a punter would  choose this over a standard Passat or Superb estate as this carries less for more dosh, neither the Arteon or it's predecessor the Passat CC sell that well. This seems to be harking back to the "lifestyle estate"  fad of ten or more  years ago

The Arteon looks sharp head on but the rear just does not fit in with the rest of the design.This unfortunately is the same and imo it looks like a hearse !

I prefer an R-Line Passat if

I prefer an R-Line Passat if you're in the market for this sort of car. The Arteon is an oddity and one that VW got wrong - hence why you don't see many at all on the road. I think I've seen less than 10 since the Arteon was launched and I drive over 40k miles a year. As for this....what stands out straightaway is the wheels are far too small for the arches for a start. In honesty, I feel VW are starting to lose their way a little which is a shame. The new Golf is a bit ugly and not in proportion anymore and the Arteon is an odd car and priced too high. I am sure VW will always do well but they are becoming pretty questionable on the design front at the moment IMO.