From £45,1057
Not easy to justify for BMW 330i M Sport money, but likably understated and rare-groove all the same. One for the VW diehard with a family – and the means
Open gallery
Close

This is a top-of-the-line Volkswagen Passat with a sporty yet also quite stealthy styling kit, and pretty much all of the available technological trimmings lavished as standard.

The R-Line Edition limited-series Passat comes in Estate form only, and only in ‘moonstone grey’ with black 19in alloy wheels and matching gloss black body trim. It was an anniversary present of a sort given by VW to Passat devotees worldwide, and was announced at the 2019 Geneva motor show at the same time that the facelifted eighth-generation car was given its global debut. Its appearance also roughly coincided with VW’s making of the 30-millionth new car to wear a Passat name badge.

The car is available with a choice of 237bhp 2.0-litre turbodiesel or 268bhp 2.0-litre turbo petrol engines, both getting 4Motion four-wheel drive as standard and the latter being marginally the less expensive; but neither being anything close to cheap. For the near-£44k of our petrol-engined test car, after all, you could get a perfectly serviceable Audi A6 with almost the same engine.

But then VW’s UK distributor only has 150 Passat R-Line Editions to sell in total, and shouldn’t struggle to find that many buyers who like understated, four-wheel drive performance wagons in general, and perhaps Passats in particular. 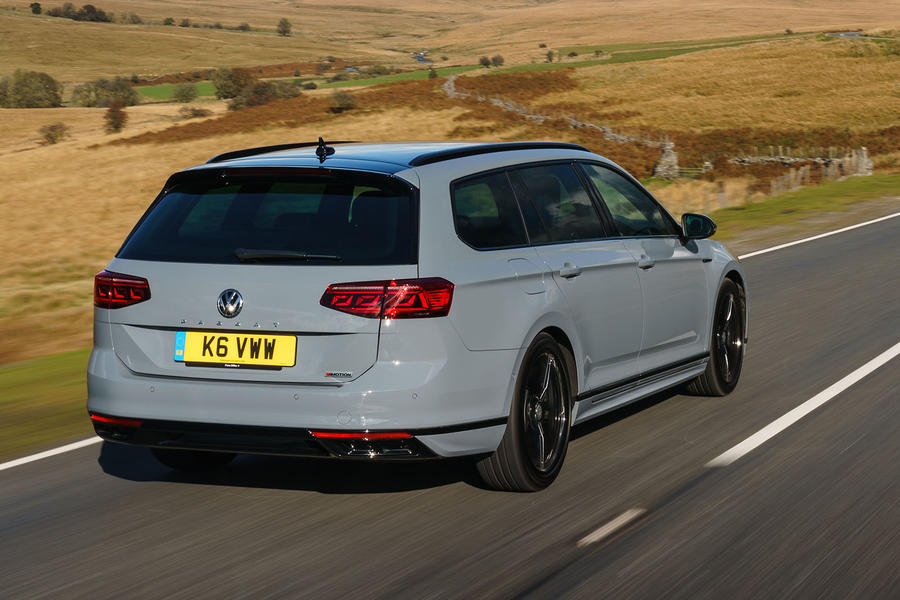 The Passat R-Line Edition’s purposefully whispering appearance might be the best chance it’s got of justifying that pricetag. Designed by the stylists at VW’s ‘R’motorsport and performance engineering division, the car’s bodykit consists of roof rails, door mirror caps, side window frames, a grille surround and a diffuser insert in high-gloss black, as well as one of the most subtle black roof spoilers you’ll ever see. And while the look is very contrast-heavy, all the black body trim complimented the grey paintwork and black wheels very nicely indeed to these eyes.

There is less that’s special about the car’s interior that you couldn’t also get on a regular Passat R-Line, although that doesn’t mean it’s not a very comfortable, pleasant and reassuringly classy driving environment. The car’s driving position is a touch higher than you might like but its part-leather R-Line sports seats juggle support with cushioning well.

Equipment level is also every bit as kitchen-sink as you’d expect for the money; you get VW’s top-end, entirely buttonless 9.2in Discover Navigation Pro infotainment system and fully adaptable digital instruments thrown in, as well as adaptive ‘LED Matrix’ headlights, adaptive dampers and Area View parking cameras. VW’s very latest Travel Assist semi-autonomous driving system also comes at no extra cost; it works more like Tesla’s autopilot system than most other lane-keep assist systems when it comes to motorway driving, with a ‘capacitive’ steering wheel that only requires the lightest of hands on the wheel to remain active. Alternatively and perhaps slightly worryingly, as someone at independent safety testing centre Thatcham assured me a few months ago, an uncooked sausage cable-tied to the rim works just as well.

Since there’s been no retuning of suspension for this car, it need come as no surprise that this Passat rides in typically well-mannered fashion. Those 19in rims kick up something of a fuss over coarser motorway surfaces and aren’t brilliant at rounding off sharper edges on single carriageway roads, but you only really notice any roughness when you’re using the firmer ride modes. Leave this car in ‘comfort’ and it is and does precisely as described. The four-pot engine remains muted, the gearbox slick and unobtrusive, the car’s gait quite supple and calm. In fact the car doesn’t impose any serious refinement or comfort penalty to speak of.

Switch to a keener mode of operation and you’ll find the car has plenty of outright briskness to summon, from an engine that revs as willingly as almost any comparable turbo four-pot but which doesn’t flood the mid-range with non-linear boost-derived torque.

Around 3000rpm and when locked in a higher intermediate gear, a Passat GTE feels a good deal quicker, actually; and so it should. And yet this one has good throttle response, and a moderately zesty and linear style of delivery, too, which is enjoyable to get stuck into. The twin-clutch gearbox isn’t always as good at picking ratios in ‘S’ mode as it is during more relaxed motoring, and sometimes takes just a shade longer to deliver paddleshift downchanges than you’d like. Nevertheless, you soon get used to exactly how hurried it seems to be happy to tolerate being.

The Passat's chassis isn’t one to rival the best of the rear-driven executive machines that £44,000 would otherwise buy you for handling poise or driver reward; and neither is it really transformed by the one technical change on the wrap sheet of the R-Line Edition car (VW has made this the only Passat on which the electronic stability control is fully switchable). It is grippy, precise and surefooted in most conditions, though, and body movement is controlled well considering the car’s size and generally comfortable demeanor. Quicker cross-country drives can feel gently enlivening and absorbing, then, despite controls that don’t provide much feedback, and handling that remains taciturn and predictable even when invited to become otherwise. 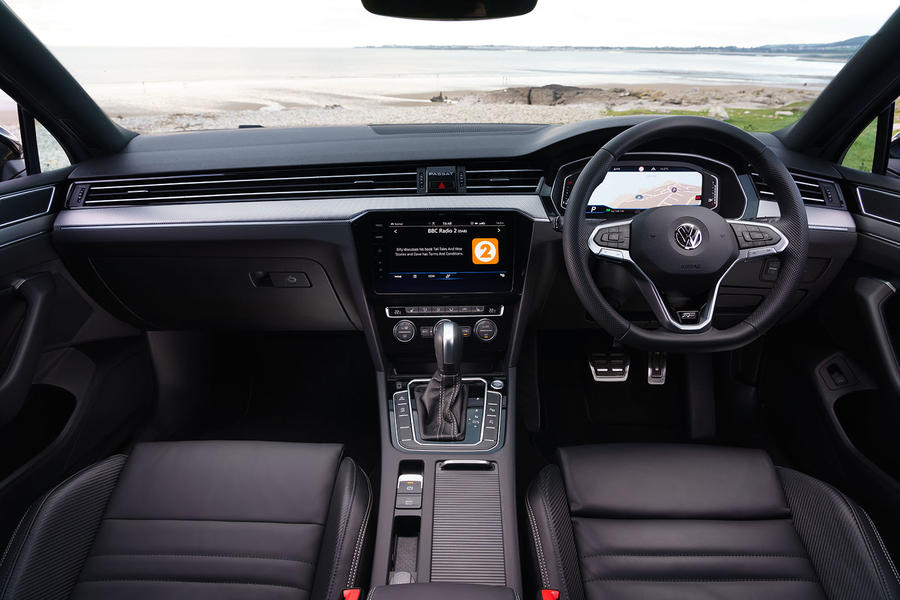 The Passat R-Line Edition might look expensive even to VW diehards. If I wasn’t absolutely convinced that I needed so much space, this tester would find it hard to justify at a price that puts it fully £6000 above an outgoing Golf R Estate; a car that, spaciousness aside, does pretty much everything this Passat is seeking to do, but does it all with more pace, character and enthusiasm.

And yet that makes the top-level Passat’s case seem harder to make than it need be for some. As a pretty humble family wagon made ever-so-slightly special, and just a little bit rare and collectable, this car has a very particular and quite niche but nonetheless real sort of ownership appeal.

It’s the only Passat available with this particular tune of 268bhp petrol engine, after all. And it reminds you of the likes of the MG Montego Turbo or the Ford Mondeo ST200; ordinary family cars, both, made special and likable without getting mixed up in the trappings of the performance car hierarchy or somehow weighed down as reluctant status symbols.

As a fairly fast, really usable, gently enjoyable and very pleasant performance estate with just a little bit of tastefulness and restraint about it, it’s something of a rarity. And if nobody seems to know exactly what it is or why you like it? Well, you might quite like that about it too. 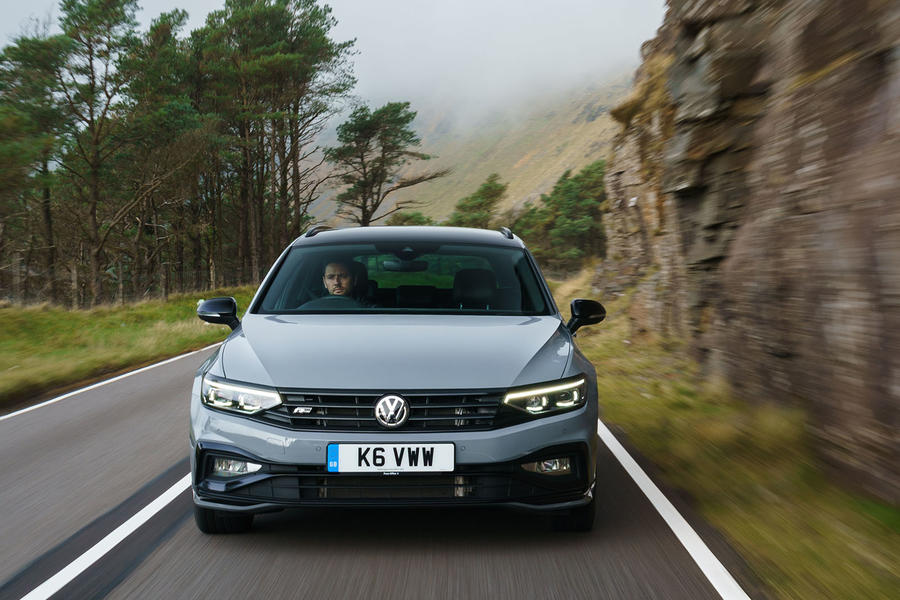 a well specced V60 T5 R-Design with a few tasy added extras is a lot cheaper and better looking, as well as being a more modern design.

More powerful engine in the superb. Better colours, can go full L&K luxury for far less money. Not sure why VW group created this.
legless 20 December 2019

Surely somebody in the market for a Passat estate would be looking esactly for that - a large family car. To draw comparisons with a 3-series is a little poinltess in this respect - they're aimed at different markets, and the 3-series has a significantly smaller interior, meaning that it wouldn't necessarily be under consideration.