BACK TO ALL NEWS
Currently reading: 2021 Skoda Kodiaq vRS prototype previews design tweaks
UP NEXT
Supercars to e-bikes: the story of Romans International

Skoda is set to update its Skoda Kodiaq large SUV after nearly three years on sale, and a camouflaged prototype of the top-rung vRS variant appears to have been spotted testing ahead of an anticipated reveal later this year.

The mule wears similar camouflage to a prototype of the standard Kodiaq seen last year, but its red brake calipers, larger brake discs, twin exhaust outlets and sports alloy wheels give it away as a member of Skoda's vRS performance line-up.

Following in the footsteps of the updated Superb flagship, the Kodiaq is set to receive similarly subtle styling tweaks and an interior technology upgrade.

Heavy camouflaging to the front and rear ends suggests the most obvious visual changes will come in the form of redesigned bumpers and light units, with Skoda’s trademark grille design carried over from the outgoing model. 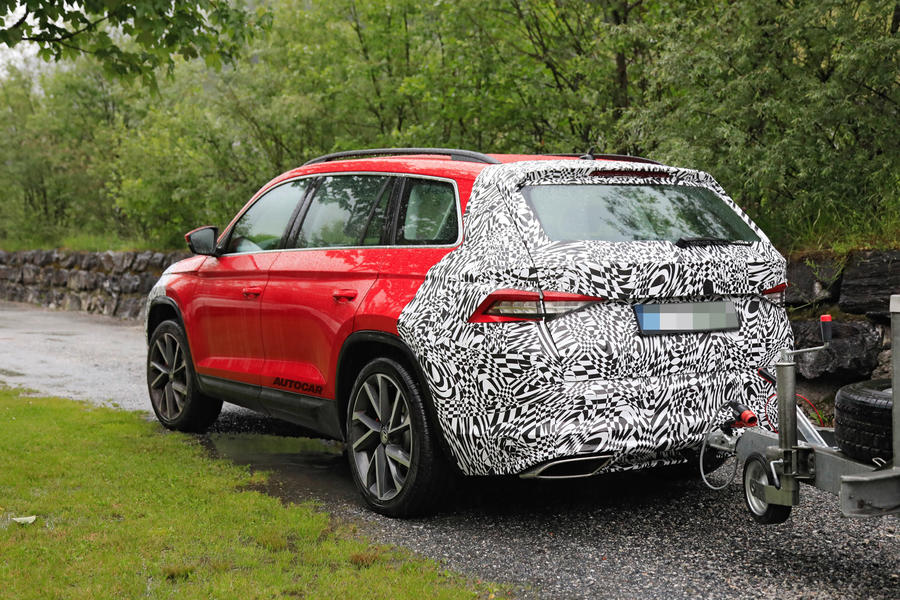 New features for the 2020 Kodiaq are likely to include the matrix LED headlights already seen on the new Superb, along with advanced driver aids such as predictive cruise control.

Both prototypes spotted so far have been towing what appears to be a dynamometer, suggesting the planned introduction of a new powertrain. The refreshed Superb was revealed last year and is available for the first time with a plug-in hybrid option. That system is also expected to make its way into the Kodiaq in due course.

With a 154bhp 1.4-litre turbocharged petrol engine mated to a 114bhp electric motor, PHEV variants of the new Superb are capable of 34 miles of pure electric range and a likely 7.4sec 0-62mph time. The Kodiaq would not be able to match these figures due to its extra weight, but it shouldn’t be too far off.

More likely in this prototype’s instance, and given the lack of a grille-mounted charging port, is that it is running the revised 2.0 TDI Evo diesel engine first seen fitted to the new Volkswagen Passat.

Another SUV design clone. I

Another SUV design clone. I know car stying is a fashion business, and that designers ape each other all the time.

But... it wasn't so long ago that Skoda had something unique to offer, such as the Yeti or Roomster, even if the production versions were not a patch on the original concept sketches.

But today, Skoda and other new VAG cars seem to be just a badge-engineered modern take on British Leyland of the 1970s.

Design tweaks? Can they make

Design tweaks? Can they make it even duller?
claybarr 1 July 2019

Nice to see this here. I like it and thanks for sharing the useful posts like this. I like to spend time with my pets. Would you like to know about do cats smile? Here you will get the best tips form the experts about pets. Check this for more details.