BACK TO ALL NEWS
Currently reading: 2017 Land Rover Discovery: new pictures show SUV almost undisguised
UP NEXT
How Max Chilton and the McMurtry Speirling conquered Goodwood

A near production-ready fifth-generation Land Rover Land Rover Discovery has again been spotted almost undisguised ahead of its launch later this year.

The UK model was spotted in the same state of minimal disguise as previous images, revealing much of the car's styling and shape as well as another alloy wheel design.

Read our review of the 2017 Land Rover Discovery

The Discovery seen before was spotted in Leamington Spa, close to Jaguar Land Rover's Gaydon headquarters, and was fitted with a 2.0-litre diesel engine thought to be one of the manufacturer's Ingenium powerplants from the Discovery Sport and Jaguar XE.

The new pictures confirm the Discovery will feature a lower, sleeker design, similar to 2014's Discovery Vision concept. The offset registration plate also suggests it will have an asymmetrical tailgate - a nod to previous generations of the model. It will also have a plusher, more upmarket cabin that will be no less practical or versatile than that of the current model.

The new model will also be significantly lighter than the current car and come packed with new technology when it goes on sale.

It will be the largest in a family of three or more upcoming Discovery models.

Land Rover has left the door open for another Discovery model below the smaller Discovery Sport as it looks to cash in on a growing global SUV market that will soon top 20 million sales worldwide. 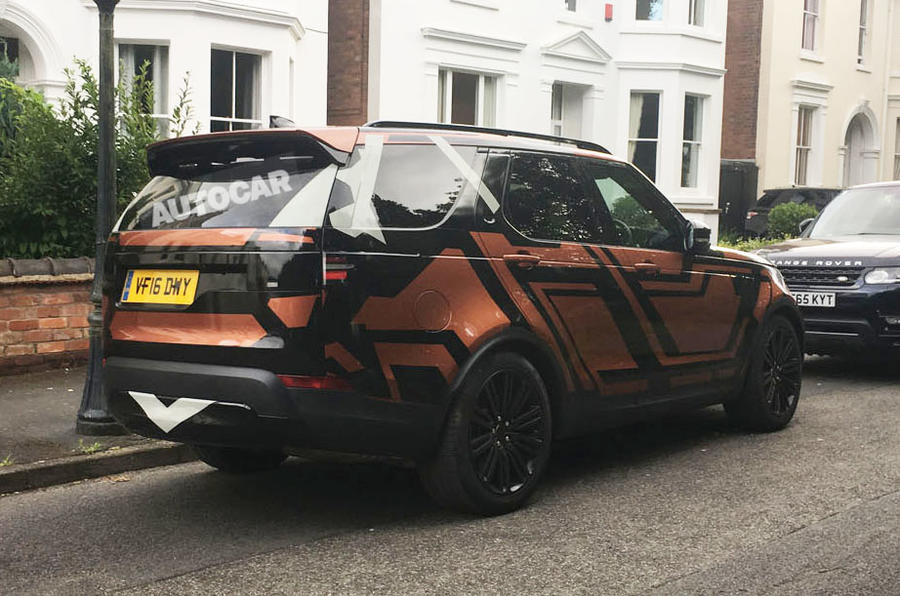 This should contribute to a significant saving over the 2622kg kerb weight of the current car, which is underpinned by the strong but heavy T5 ladder chassis.

The core engine for the fifth-generation Discovery in the UK and Europe is set to be an updated version of the current 3.0-litre SDV6 diesel.

Despite Jaguar Land Rover recently revealing hybrid and electric research projects, this technology is not destined for production until the next decade.

Engines from the Ingenium family look likely to find their way into the car, either in current four-cylinder form with mild hybrid systems, or in V6 guise, if JLR further develops the new modular engine technology, as is widely expected.

Land Rover previewed the next-generation Discovery at the New York motor show in April 2014 with the Discovery Vision, a concept that McGovern said was “very important in terms of being a benchmark for new-generation Discovery models: the versatility of the car, the seats, the reconfigurability, how you use it inside”.

The overall intention is to create a car that’s sportier and more modern-looking than today’s car but no less practical or versatile.

The production model, prototype versions of which are now regularly spied around JLR’s Midlands base, stays true to the concept on the exterior at least, with only detail changes at the front and rear ends. The concept’s radical, pared back interior is unlikely to carry over as extensively as the exterior, however.

Despite the radical exterior styling departure, McGovern said there were still “certain guidelines” in designing any Discovery. He said there would always be a stepped roof to accommodate the “stadium seating” for seven people, a visible pillar in the side to break up the mass and optimum proportions to maximise the volume inside the car.

He said the Discovery was being made more premium and would be brought “deliberately closer to Range Rover”. He added: “There will be a premium execution in Discovery, more Range Rover-like. But we need to not confuse and get the balance right.”

Despite the new design language, McGovern said the new Discovery “wouldn’t be polarising”. He said that, as much as he loved the current car, it was always seen as specialised in its design and ethos, so the new model would be “more universally appealing, without compromises”. He added that he had “no desire to upset traditionalists; the trick is to bring them with you”. 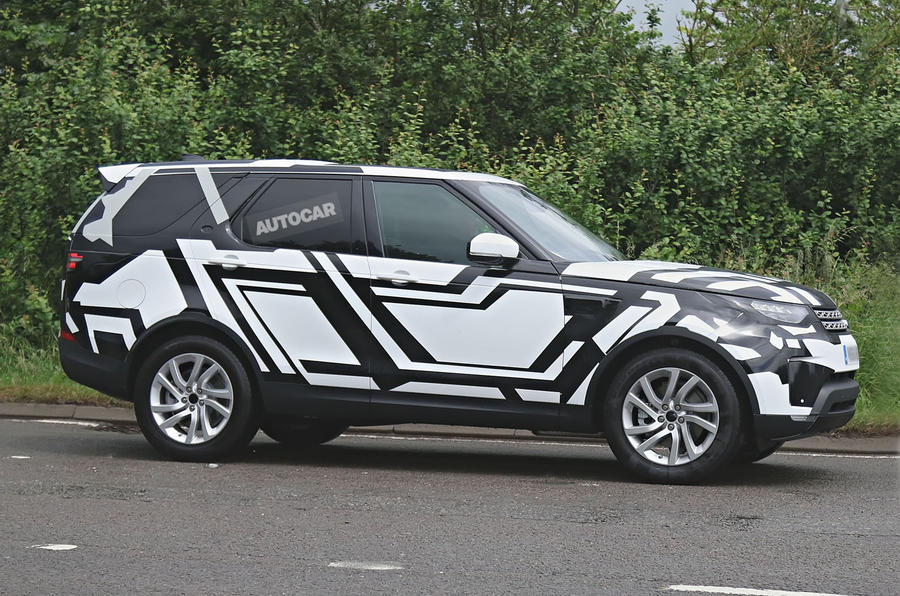 McGovern also spoke of the ever-closer ties between design and engineering and making sure the needs of both were met. He hinted that the Discovery would continue to have class-leading off-road ability, but in an altogether more stylish package.

“We won’t back off from that capability, but it has to be appropriate and relevant,” he said. “We need to be about more than that. It’s a killer combination: core engineering technology and truly desirable and bespoke design with our own twist. Design is playing a more fundamental role with engineering. Not design to engineering’s detriment, but a collaboration.”

In addition to its class-leading off-road ability, the Discovery could also become home to new technology in development at JLR. This includes a laser scanning system that can automatically adjust the suspension and transmission based on the road ahead, a ‘transparent bonnet’ that projects an image of what’s underneath the car onto the bonnet and the ability to control the car remotely to park it in tight spaces.

On the subject of a model smaller than the Discovery Sport, McGovern said: “We’re not going to make cars any bigger.” He added that cars needed to be lighter and more sustainable, with the use of lightweight composites and materials. These are “all things we’re developing”, he said.

“How small can you go with luxury? You usually think big, but we can go smaller. Can we go below the current Discovery Sport? We probably could. Across the range? Why not? All things are considered.” 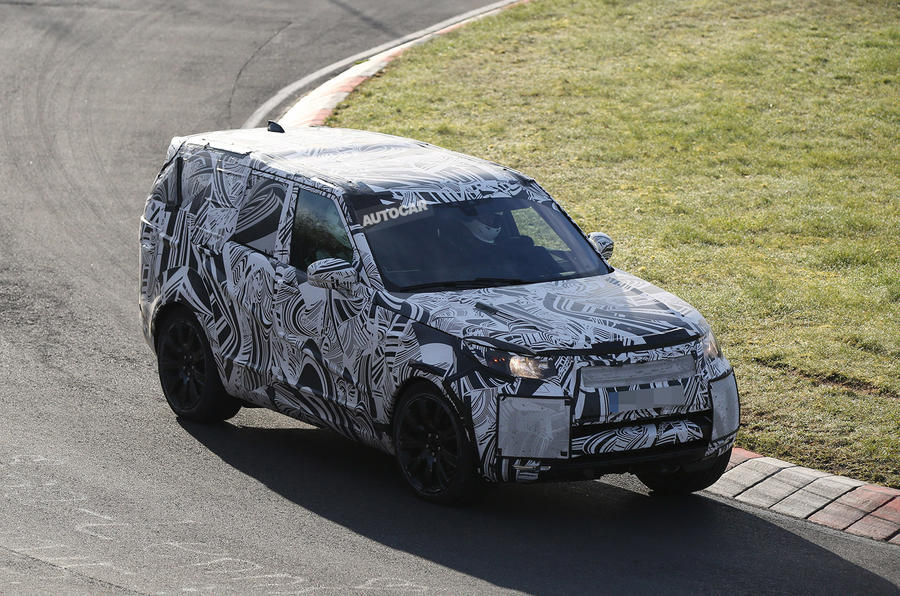 For the past few years, design director Gerry McGovern and other Land Rover executives have spoken of a ‘three-pillar’ model strategy. Within it, there will be three product lines: ‘Luxury’ Range Rovers, ‘Leisure’ Discovery models and ‘Dual Purpose’ Defenders.

The plan has always looked impressive during presentations, but the only real ‘family’ seen so far has been Range Rovers. It’s been a deliberate decision. “There’s been a lot of focus on Range Rover, but it's been needed to build revenue,” says McGovern. With revenues now up, attention has turned to expanding the Discovery range. The more upmarket Discovery Vision concept of 2014 set the blueprint for this plusher, sleeker range of Discovery models (something that continued with the Discovery Sport), and McGovern says a more universally appealing design for the next-gen Discovery will increase its chances of success.

McGovern believes that the Discovery name could have as much equity as the Range Rover one in future when there is a full range of models, something he also believes to be true of the next-gen Defender range.

This new Defender family will ensure that functional Land Rovers won’t disappear from a line-up swelling with plush, premium products. “When you have a family of Defenders, you get the stretch back,” says McGovern.

The disguise makes it difficult but to me it looks like a Ford Explorer which is the car that Ford should have brought to the UK and not the Edge.
dipdaddy 25 August 2016

I feel a great disappointment

I feel a great disappointment with this design. the previous discovery was all chunky, big and dominating. made the audi's, merc's look like lego cars. the minimalist and simple lines was just so spot on it was unbelievably smart and I could easily say it was the best looking 4x4 and smartest vehicle "period". It has and still has great road presence and one thing this new discovery will show is how good the previous design really was and how wrong they got this. it may have weighed near enough the same as the RR Phantom, thirsty and old ladder frame design but when you see one in the rear view mirror, size matters and you move over.
Marc 25 August 2016

but when you see one in the rear view mirror, size matters and you move over.

What the f uck are you talking about. I see one in my rear view mirror and usually mutter the words 'c.unt'.

This time they've designed the roof to allow for a contrasting color as on the rest of the LR/RR Lineup. The New Defender will also have this option. I'm thinking the Discovery 5 will be in British showrooms December 2016 or very early 2017. It'll probably make it stateside late Spring. I'm buying my LR4 in two weeks when the lease expires to tide me over until the new one goes on sale. Hopefully they don't decide to jack the price up too much, but Gerry McGovern said they're going to move it closer to the Range Rover( to create space for the New Defender is my guess ) which seems to suggest it'll have a higher price point.
View all comments (37)