BACK TO ALL NEWS
Currently reading: Hot Land Rover Discovery Sport spied
UP NEXT
Spending 48 hours touring in a Ferrari Roma

A hot version of the Land Rover Discovery Sport SUV could be in development, based on these recent spy shots.

The new Land Rover Discovery SVX has been revealed

Caught in Scandinavia in last few weeks of the winter testing season, the Discovery Sport prototype has a newly designed nose cone. Autocar’s spy photographers also say that this test vehicle is powered by a 2.0-litre turbo petrol engine, making it almost certainly a prototype fitted with the JLR’s upcoming, all-new Ingenium unit.

But a combination of the subtly more aggressive styling of this nose cone and the extra air intake capacity hints at that this Discovery Sport could be powered by a performance version of the Ingenium petrol engine.

Although not radically different from that used by the current model, the new nose has a wider main air intake and narrower mounting area for the aluminium ‘bash plate’.

The air intakes on the front corners of the car are also bigger and shaped more like the auxiliary intakes used by the Range Rover Sport SVR and also featured on the new Evoque Convertible.

Close examination of the spy shots also seem to show small air intakes on the lower edges of the nose cone, which could well be cooling ducts for the front brakes. The slot-like air intake directly under the radiator grille is also noticeably slimmer than on today’s production car. 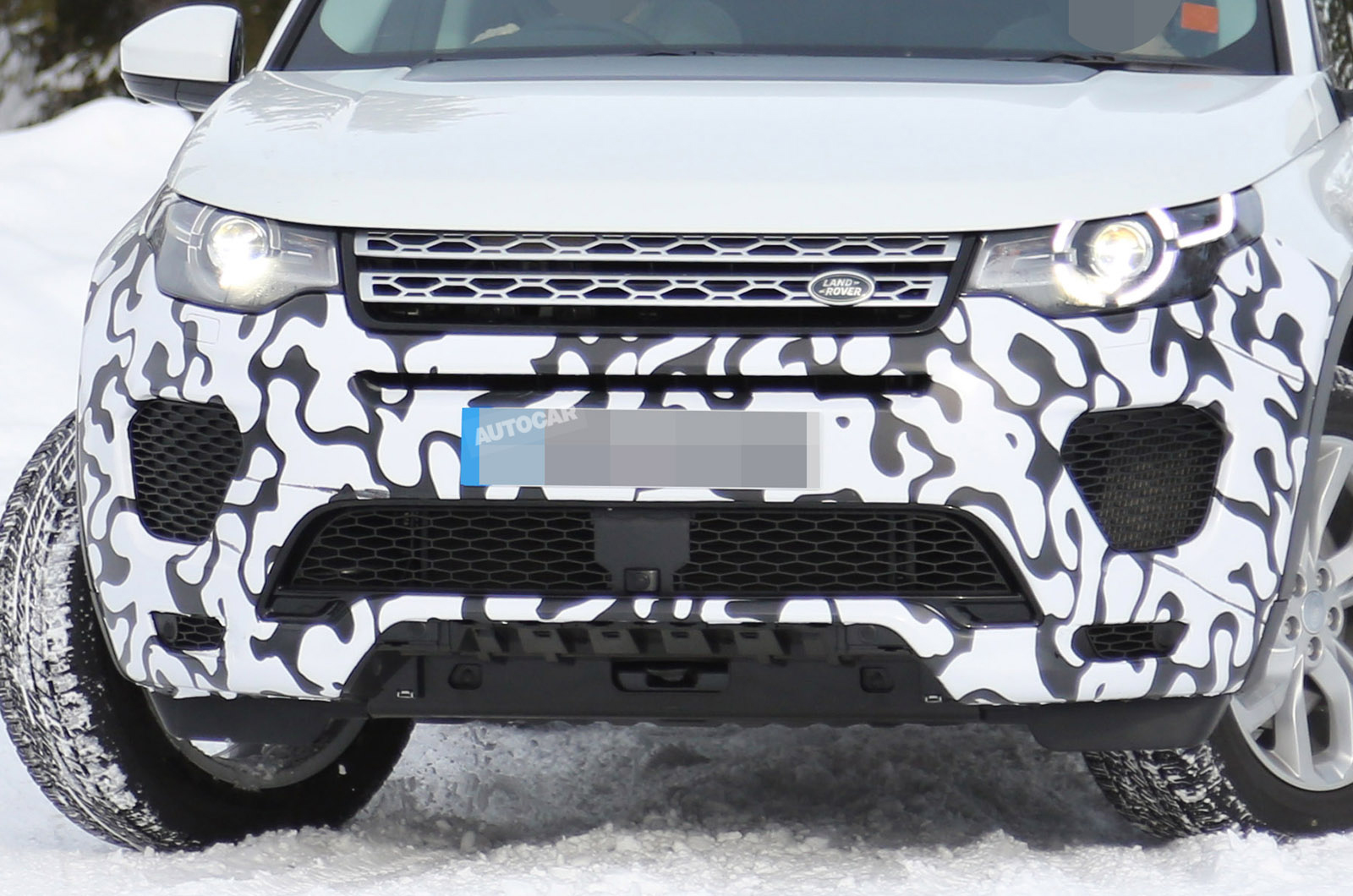 Currently, a petrol engine is not offered to UK buyers of the Discovery Sport, although one is sold in the US and Australia. It uses a Ford-derived 238bhp unit hooked up to a nine-speed automatic gearbox and could hit 60mph in a relatively sprightly 7.8sec.
Judging by this prototype, any hot Ingenium petrol Discovery Sport is at least 18 months from being launchded, and sources say this version of this engine will be good for around 298bhp. However, officially, Land Rover says there are currently no plans to sell a petrol-powered Discovery Sport in the UK. The turbo 2.0-litre petrol engine is also expected to be offered in the Jaguar XE saloon. 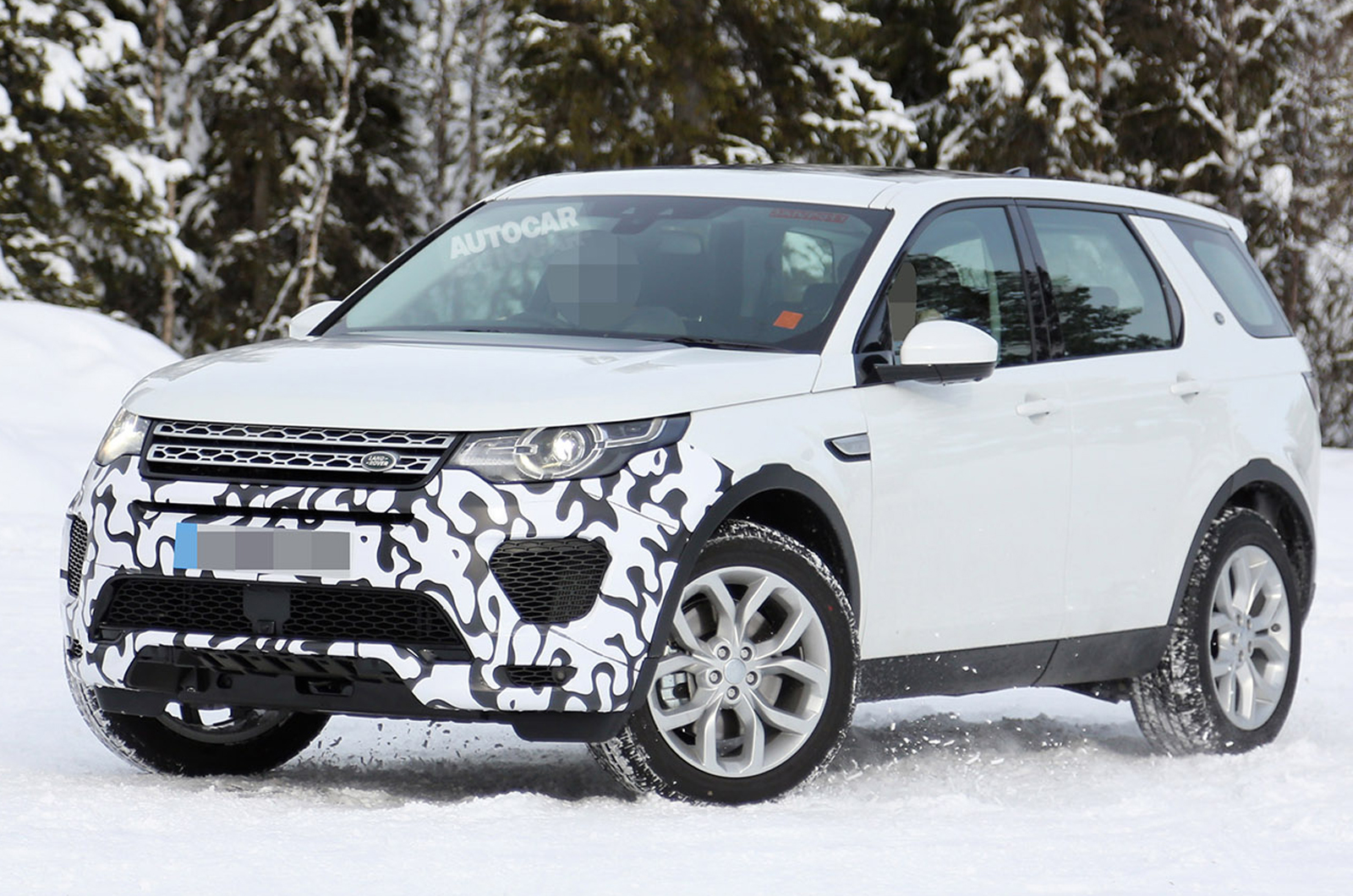 A hot Discovery Sport will be something of a departure for the Land Rover brand, but it’s clearly a profitable niche that cannot be ignored. Expect any production car to benefit from a subtle styling additions and more dramatic rear end, with a redesigned rear bumper and tailgate spoiler.

Bigger wheels - 20in at least - and brakes will also be used, and the interior will be significantly visually enhanced. All-wheel drive and the nine-speed auto ’box will be standard issue.

Pricing is expected to be north of £44,000 price tag demanded for the current HSE Luxury range-topping model. It’s likely that potential buyers of the first properly sporting Land Rover are unlikely to get much change from £50,000.

They should now have been

They should now have been able to put some development time into the Ingenium, lets hope the petrol is better than the dog of a diesel unit.
earl grey 22 March 2016

Sporty Version of a Discovery Sport?!

Bit ironic they're launching a sporty version of something badged as "Discovery Sport"! Until they can compete with Merc/ BMW/ Audi on a decent range of engines they've got more hype than hope I'm afraid.
DiscoVeronica 22 March 2016

Bit ironic they're launching a sporty version of something badged as "Discovery Sport"!

"Sources at JLR couldn't confirm or deny the designation of the new model, which may or may not exist, but you might not be too wide of the mark were you to expect the badge to say 'Discovery Sport Sport', with the second 'Sport' at a 12-degree angle in red script, quite possibly Pantone 185..." ;-)

Why not! Probably limited appeal in the UK for a hot petrol SUV, but will help with the brand image. It will sell in reasonable numbers in the US, and possibly China.

As long as they don't do a coupe version (like the X6) of the Disco Sport, I am happy!