BACK TO ALL NEWS
Currently reading: 2017 BMW 5 Series saloon and estate - latest spy pictures
UP NEXT
2025 Mercedes A-Class EV to be luxurious EQ entry point

The new, seventh-generation BMW 5 Series has entered the final phase of engineering development and durability testing ahead of its unveiling in the second half of 2016.

It’s set to reach UK showrooms in early 2017 and go head to head with the upcoming new Mercedes-Benz E-Class, the Jaguar XF and the Audi A6. It will offer a broader range of powertrain options than today’s record-selling model. These will include a new plug-in petrol-electric hybrid with, BMW insiders confirm, a zero-emissions range of more than 20 miles.

Our spy photographers have also spotted the 5 Series GT, 5 Series Touring and M5

The decision to fit the new 5 Series with a contemporary 48-volt electrical architecture enables it to feature advanced autonomous driving systems. It can have hands-off operation up to a pre-determined speed, a sophisticated anti-collision system and fully autonomous braking, among other features.

The increasing importance of connectivity means the new 5 Series will be equipped with a fifth-generation iDrive system, as used by the new 7 Series. It supports new touchpad and touchscreen functions, allowing you to operate the various features in a similar style to that of a smartphone, with familiar pinch, point and swipe commands, or alternatively via an updated rotary dial mounted on the car’s broad centre console. 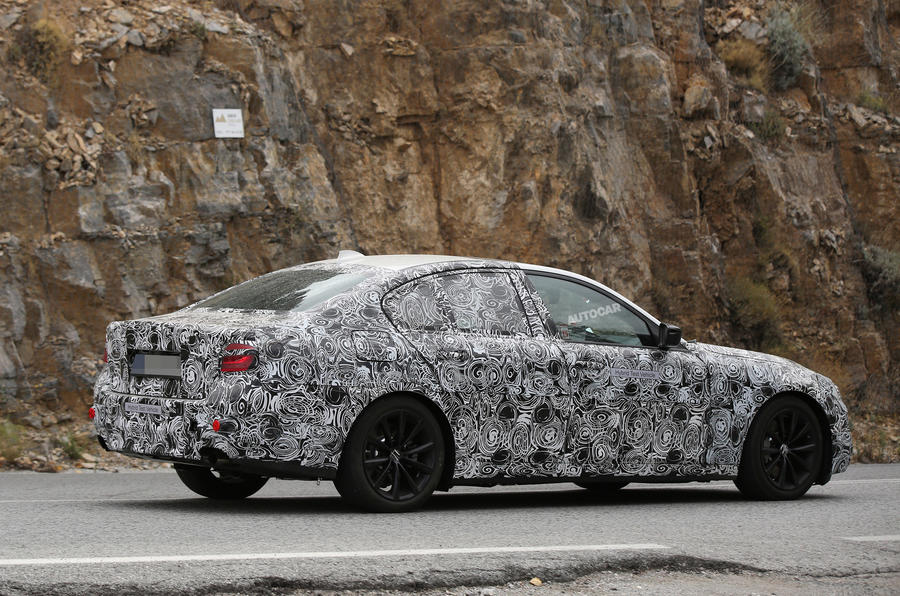 As with today’s seven-year-old model, the new 5 Series will be produced in three distinct bodystyles: saloon (codenamed G30), Touring (G31) and GT (G32). The GT will continue to feature a large liftback but in what one high-ranking BMW insider has described to Autocar as a “much more elegant form”.

The saloon is scheduled to make its public debut at the Paris motor show during the third quarter of 2016. Dates for the launch of the Touring and GT are yet to be finalised, although sources with knowledge of the planned production schedule suggest they will appear at the Geneva and Frankfurt shows in 2017.

Recent prototypes photographed testing on public roads in Germany reveal that the new 5 Series has gained an evolutionary exterior styling update, with cues lifted from the Pininfarina Gran Lusso Coupé concept car first shown at the 2013 Villa d’Este Concours d’Elegance in Italy. Its traditional three-box silhouette is retained. However, a more heavily raked rear window and sloping boot deck provide it with a sleeker profile and more shapely rear end than today’s model.

As part of efforts to significantly improve its aerodynamics, the new 5 Series adopts a more prominent kidney grille with louvres that open when the engine requires cooling and close again to improve airflow around the front end. The headlights, available with optional lasers for the high-beam function, also extend into the chrome surround of the grille in a bid to provide the car with greater visual width. 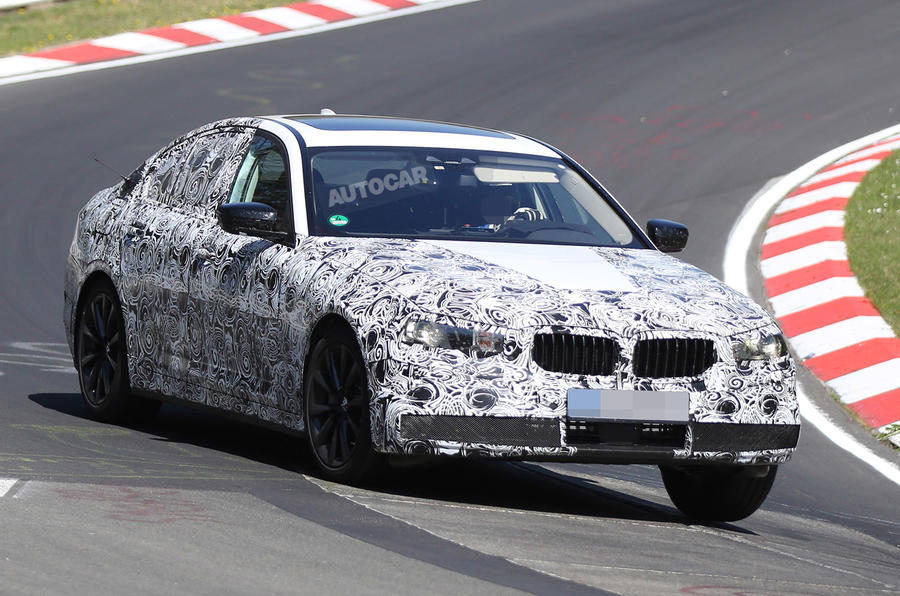 Along the flanks, there is a more pronounced shoulder, added tumblehome to the glass area and an air breather element behind the front wheel arches. The rear gets a shapely new C-pillar treatment, OLED tail-lights and, on the more upmarket models, tailpipes set within the lower section of the bumper. As with the 7 Series, BMW plans five styling packages for the new 5 Series: Standard, Sport, Pure Excellence, M Sport and Individual.

Underpinning the car is an advanced new platform codenamed OKL (Oberklasse, or ‘luxury class’). First used by the new 7 Series, it has been conceived around a combination of materials, including carbonfibre, aluminium, magnesium and high-strength steel. The new 5 Series will shed up to 100kg compared with today’s model, which is a claimed 1595kg in its lightest form, the 520i.

The interior adopts a new-look dashboard that features high-resolution digital instruments and a free-standing infotainment monitor. The design is similar to that in the latest 7 Series, with the same basic architecture, multi-function steering wheel, switchgear and materials.

The subtle increase in external dimensions is reflected inside, with added accommodation both front and rear. BMW has placed great emphasis on improving the comfort and refinement of the 5 Series. New seats with softer cushioning are used up front. The bodyshell also receives new sound-deadening material.

From the outset of UK sales in early 2017, the engine line-up will include various versions of BMW’s latest B47 diesel and B48 petrol four-cylinder units - all in 2.0-litre form, as with today’s model.

They will be joined by BMW’s recently unveiled B57 diesel and B58 petrol six-cylinder engines, which also use a standardised 500cc individual cylinder capacity for an overall volume of 3.0 litres.

The new 5 Series is also earmarked to receive a newly upgraded 444bhp 4.4-litre V8 petrol engine, recently launched in the 750i.

Other engine options will include a quad-turbocharged version of the new six-cylinder B57 diesel, which will be a successor to the M550d. Set to replace the existing tri-turbo N57 engine, this advanced 3.0-litre unit is said to adopt electrically driven turbos to bolster reserves beyond the already stout 376bhp and 545lb ft of today’s model.

BMW also plans to offer the new 5 Series with the plug-in petrol-electric powertrain used in the 330e, 740e and X5 xDrive40e. The hybrid set-up mates a 2.0-litre four-cylinder petrol engine with an electric motor mounted within the gearbox and a lithium ion battery sited in the floor of the boot to provide an electric-only range of more than 20 miles.

The new 5 Series flagship will be the M5. Set to offer a choice between rear-wheel drive and optional four-wheel drive for the first time, it is tentatively due to be unveiled at the 2017 Geneva motor show. It will feature a developed version of the 4.4-litre V8 petrol engine.

Standard 5 Series models will receive either a standard six-speed manual gearbox or a new nine-speed automatic. The M5 will continue with a seven-speed dual-clutch automatic transmission. As with the new M5, some models will be offered with the choice of rear or optional four-wheel drive. 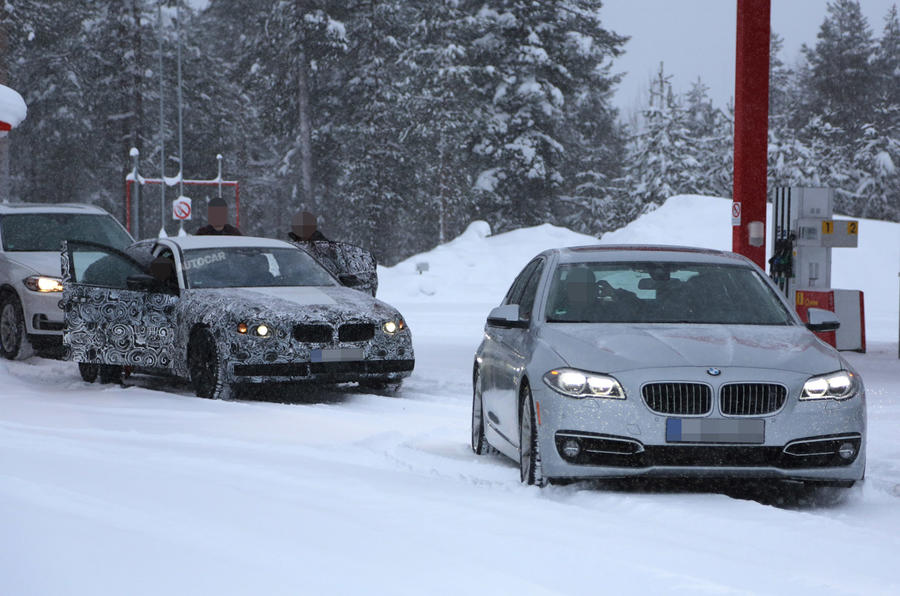 Comment: Matt Saunders - What the new BMW 5 Series must to do beat Jaguar's XF

The first thing the new 5 Series will need to do is return BMW to the top of its class for fuel economy and emissions. The current car’s engines remain objectively competitive and subjectively very strong, but BMW buyers expect nothing short of class-leading company car tax liability. The new car’s significant weight loss and nine-speed auto gearbox should deliver on that front.

On quality, practicality, technology and cool-headed rational appeal, the 5 Series’ standards are already high, so any gains here will only consolidate outstanding selling points. An even more spacious cabin, fitted out with the 7 Series’ excellent infotainment systems, will win the car a great many fans.

But to dethrone Jaguar’s excellent new XF in Autocar’s estimations, the new 5 Series will have to show greater warmth of character than its predecessor - and crisper, more delicate handling and a more fluent ride.

The inertness of the current BMW’s steering and initial looseness of its close body control were disappointments when the car faced the XF recently.

But if BMW can integrate its latest active chassis and steering systems as discreetly as it did on the 7 Series and give the new 5 Series a dash more dynamic piquancy than its bigger brother, it will be on a winning trajectory.

Heard in the forums at Bimmerpost that the new 5 Series is going to be unveiled on 9th July 2016.

Things have gone a little quite concerning new spyshots of the new 5, so looks like a revealing may be imminent.

Nice to read that BMW are on top of the technology but how much of it will be standard or an optional extra at huge extra cost? It appears all manufacturers are going down the route of stating a basic price for a car but then never selling one. They then base their "retained value" on the basic price which gives a very false figure compared to real depreciation.
View all comments (22)