BACK TO ALL NEWS
Currently reading: 2017 BMW 5 Series Touring spotted almost undisguised
UP NEXT
Volkswagen ID Buzz to kick-start wave of enthusiast-oriented EVs

The next-generation BMW 5 Series Touring has been spotted testing ahead of its planned arrival in the middle of 2017.

Set to go on sale around three months after the 5 Series saloon arrives in dealerships earlier in the year, the 5 Series Touring will rival the likes of the Audi A6 Avant, Jaguar XF Sportbrake, Volvo V90 and the new Mercedes-Benz E-Class Estate.

As with the saloon, this latest Touring test mule shows off an evolution of the current car's design language, characterised by its thinner, wider kidney grille. Styling inspiration has come from the new 7 Series, while influences from 2014's Gran Lusso Coupé concept might also be adopted. At the rear, the Touring features a sloping boot with new tail-light clusters. 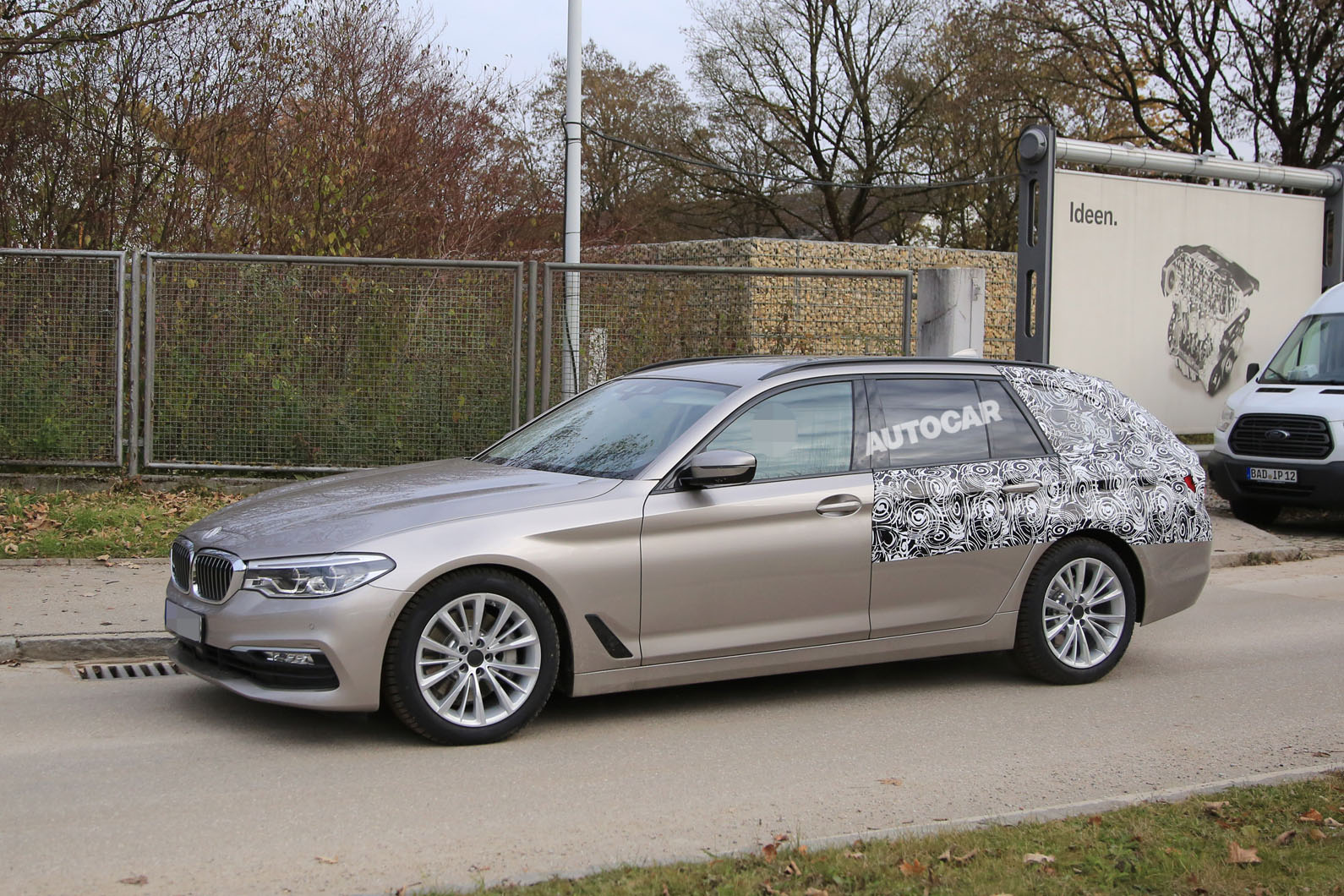 As is traditional, BMW is expected to improve on the load space offered by the current 5 Series Touring, which offers 560 litres with the rear seats in place, rising to 1670 litres with them folded away.

Engines for the Touring will be shared with the 5 Series saloon and include a core range of four and six-cylinder powertrains from launch. A family of common 2.0-litre and 3.0-litre petrol and diesel units will feature, as well as a successor to the current triple-turbocharged 3.0-litre six-cylinder diesel. That engine is a new quad-turbocharged six-cylinder unit destined for use in the firm's high-end models and is said to develop well over 400bhp and 590lb ft.

A newly developed V8 engine will also be offered in some markets, although it's not yet known whether that engine will be available in the UK.

Also available will be a BMW 5 Series Touring Hybrid model, pairing a 2.0-litre four-cylinder petrol engine with an electric motor, to produce combined outputs of 242bhp and 295lb ft. That set-up has already been driven by Autocar in the 3 Series eDrive. Gearbox options will include six-speed manual and nine-speed automatic transmissions.

As with the saloon, which sheds up to 100kg compared with its predecessor, BMW will be looking to drop the kerb weight of the 5 Series Touring below the 1785kg of today's 520i SE.

While the 5 Series saloon range will be crowned by the 600bhp M5, which gets a further developed version of the 4.4-litre V8 used by today's car, there are currently no plans to produce a Touring version of that model. The most potent 5 Series Touring will come from Alpina and be named B5 Touring.

Much of a muchness

as mentioned by other readers - they cram stretch widen squat etc the same old mold must be easy with 3D in the design center.
I am completely OFF all of these marques and say Jag and even the new Kodiak offer a difference and apart from the crowd. I was never one for being seen in the same crap different day.
L320 29 November 2016

Clearly each to his own. Neither a Jag nor Kodiak - definitely not Kodiak - would be my idea of 'imagination'.
Ski Kid 29 November 2016

but is that with half an engine ie 3 cylinder

The larger engines make a substantial contribution to extra weight ,would ne interesting to see the weight comparing 3 litre auto to the same in an F type.I expect that the next version of F type will be much lighter they had to use the Xj alloy system which is an overkill as the XE/XF was not ready at the time.
Carmad3 29 November 2016

When will manufacturers of estate cars make a parcel shelf that can be extended when the rear seats are folded so that any luggage is hidden from prying eyes?
View all comments (10)