BACK TO ALL NEWS
Currently reading: Bred for endurance: Ford GT race car driven on track
UP NEXT
Volkswagen unveils larger and more advanced new Amarok

We sampled the Ford GT on the road and in a simulator. Now we drive the outgoing racing car untamed and in its natural environment
Open gallery
Close

They wanted to use a Ford Mustang originally, you know. Ford, which won Le Mans outright in 1966 with the GT40, thought it would be lovely to return there, 50 years later, and win again. Senior Ford people reckoned that a Mustang, entered in the road-car-based GTE category, would be the perfect ‘halo’ global sports car to make a splash.

Trouble is, the Mustang is sufficiently big that it was once described on these pages, by a colleague with a sharper grasp of similes than me, as a car that “straddles British driveways like a killer whale stranded on a toilet cistern”. And killer whales don’t make very good race cars because their large frontal area creates more drag.

There are race regulations to partially offset this: endurance racing series employ a formula called Balance of Performance, which allows big cars to make more power than small ones to overcome the slipperiness deficit. But Balance of Performance can only do so much and wouldn’t, Ford’s engineers reasoned, let the Mustang be competitive. 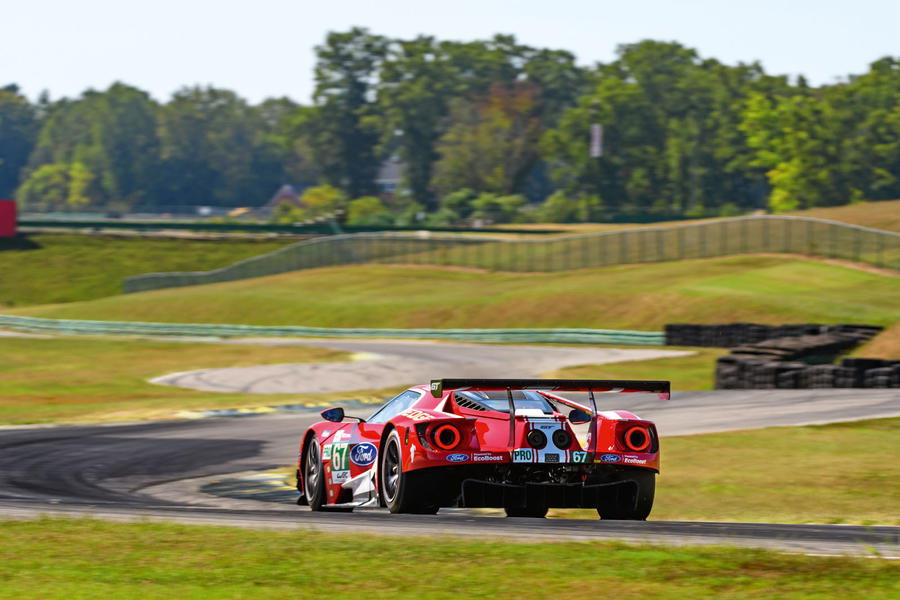 Yet there has to be some kind of road car, delivered to customers before the end of the same year the car is raced. So Ford’s engineers discreetly started working on something, in a basement, only presenting it to executives once they knew it was a valid proposition. Ford did already have form when it came to recreating the GT40, after all…

And so in late December 2016, a few of those Ford executives took delivery of their own road-going Ford GTs, a homologated road car that had, in race form, won Le Mans’ GTE class six months earlier, 50 years to the day after the GT40’s win. Job done.

Honestly, though? Road car shmoad car. Every other GTE contender is road car first, race car second. The GT was made from the ground up to win at Le Mans, and that shows on the road. Two occupants sit so close together that they might as well be in a Caterham and, if the GT40 was so called because it sat 40 inches high, this is still low enough to be called the GT41.8.

We drove the road car but Ford was reluctant to let it out on comparison tests or have its lap times recorded, because they wouldn’t be on circuits where it was at its best: anywhere that included a Mulsanne Straight. While an intriguing car, and fun in its way, it always felt like the full GT experience would be found elsewhere. 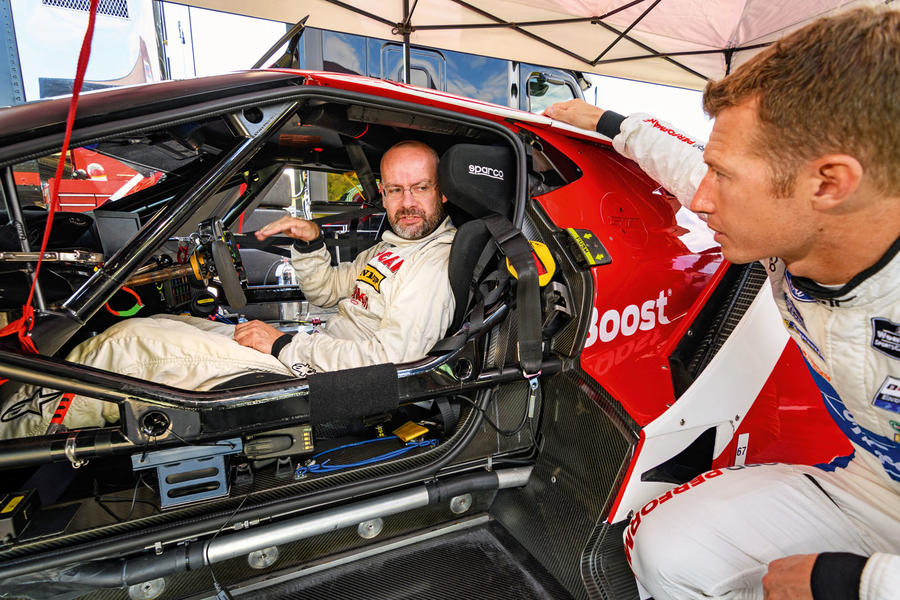 Today, I’m going to try to find it. The race car you see here, chassis number 005, took a class podium in 10 of the 26 races it entered, winning four of them, with its best Le Mans finish a second place in 2017. But Ford’s official GT race programme is now drawing to an end, so the car’s for sale. It’s time to let some clowns with readers drive it.

I’m at Virginia International Raceway, a narrow, fast, heavily sloped and cambered 3.3-mile race track I’d never seen until a week previously when I watched it on YouTube, and yesterday when I drove round it in a simulator at Ford’s performance car headquarters (‘Simulation theory’, 6 November).

In reality it looks narrower and steeper still. Some of the corners are very, very fast and, in the spirit of the curious American approach to health and safety that lets you buy a rifle but not a Kinder Surprise, none of the corners have gravel traps. It’s just grass and then barrier, sometimes at a distance, sometimes not. If I was going to let strangers drive my race car along a 170mph straight, it wouldn’t be this one, but here we are.

I get in. It’s more snug even than the road car, owing to an FIA roll-cage within the carbonfibre tub, and while in the road-going GT you sit against the bulkhead and the pedals adjust, in here there’s a tight Sparco race seat with broad head bolsters and restraining nets either side of that. A rectangular steering wheel pokes far towards your chest and there’s bare carbonfibre where the instrument panel would be, with only gearshift lights there: a small LED pane on the wheel provides other info. There’s an array of bright, clear switches on the dashboard centre and, while there are the vestigial remains of passenger space, in reality the right side of the cabin is filled with battery, electrical hardware and a pump to charge the gearshift pneumatics, which whirs loudly, like a tyre compressor, for a few seconds every few seconds. 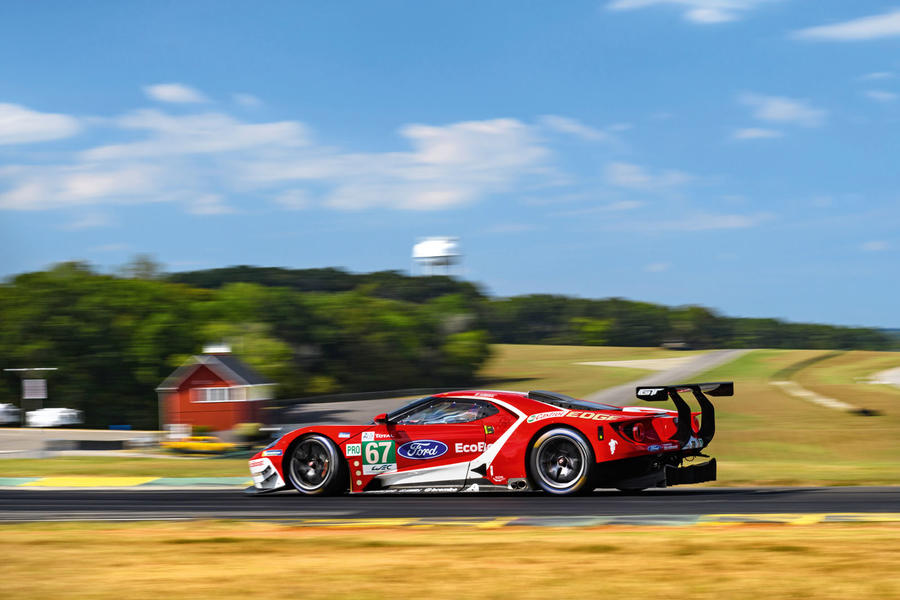 The GT uses a 3.5-litre twin-turbocharged V6 engine, to which the Balance of Performance regulations are unkind because the GT is so small and fast. In North American ‘IMSA’ race tune, it develops less than 500bhp. The road car makes 647bhp. I start with less than 500bhp, then, but am told a dial on the steering wheel will give 600bhp should I want it. This is somebody else’s racing car on cold slick tyres and a track like a faster, narrower Cadwell Park, so I’m sure I won’t.

Two laps later I have, and would turn it further if I could. It’s no wonder this car wins races: it’s so easy to sit in and drive as fast as you’re able.

It seems weird to talk ride comfort in a race car but VIR isn’t the smoothest track, and the GT absorbs and surfs bumps without a hint of harshness. The pedals are brilliantly weighted and spaced, the brake pedal particularly firm but retardation and modulation among the best I’ve ever felt, so you can lean on them hard without the merest suggestion of locking. Once rolling you can forget the clutch, brake with either foot, and gearshifts flapped through by wheel-mounted paddles are delivered immaculately every time, each downshift brapped to perfection. 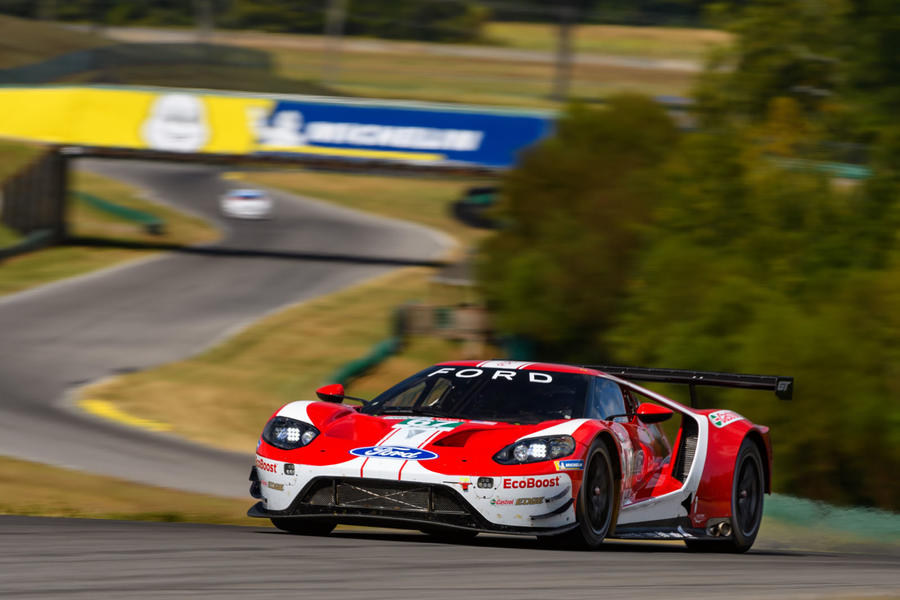 The steering is quite heavy for a race car’s, but millimetre precise with it. It gives you oodles of feel, and there’s loads of self-centring, which makes the GT a formidably stable car. That’s the aero at work, I imagine. Trailing the brakes into a corner helps the car turn but there’s a lovely balance anyway – hints of entry understeer and exit oversteer if you look for them, but otherwise flat, fast and neutral. If I had to pick a road car it felt like – GT excepted, obviously – I’d say a Lotus Exige given how well it talks to you.

Even visibility is good. The windscreen is low, it’s true, yet it’s broad and you can use the side windows in slower, tighter corners to spot exit points. And while the engine, sometimes criticised in the road car for not having more than six cylinders, works magically here. It’s a doddle to smoothly dole out power, albeit traction control and the sheer capability mean any throttle application is just ‘flat’ before long. And sure, it’s less sonorous than it would be with more cylinders, but if you were in here for two hours at a time, that’d be no bad thing.

And you can be, if you have the requisite millions. Approach Ford with a World Endurance Championship programme in mind and you’ll be offered a better deal than if you plan to put it into a collection. Ford would like the GT to keep racing. Good. Having tried both road and race cars, that is what it’s best at. 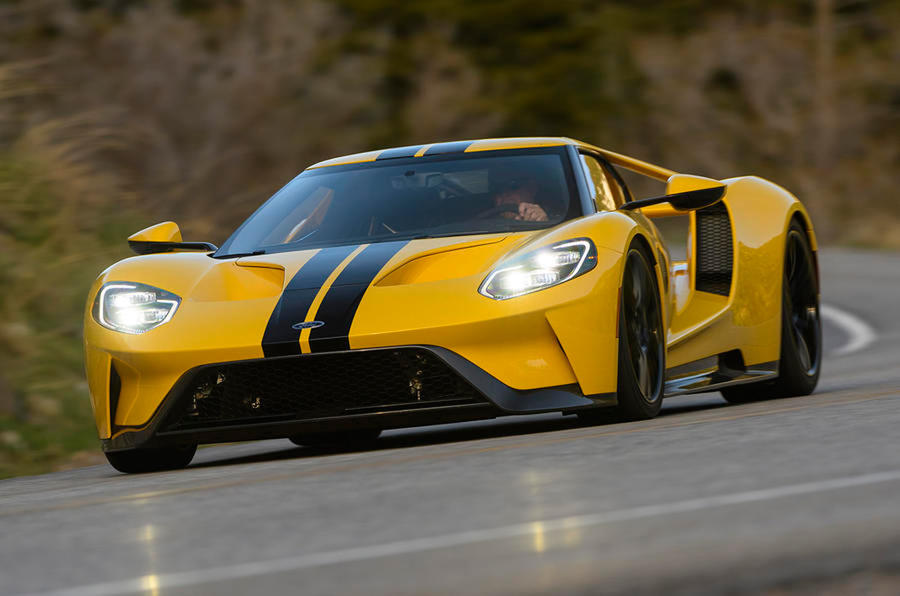 Compared to the road car

Few cars make the transition from road to race car with their character entirely intact and the Ford GT is no exception, but given it was designed to go racing in the first place, the two versions are closer than most.

Driving the road-going variant of, say, a BTCC or GTE car wouldn’t be that much use as a familiarisation process, but the GT might actually be useful.

The driving environment is one big difference. The road GT is cosy but the race car brings another level of intimidation, until you’re comfortable with the ergonomics and by how little room to move there is, which doesn’t take long.

The road car has brilliant dampers that give it an eerily good ride, with adjustable ride height that slams itself on the deck in a heartbeat. The race car is keyed to the ground all the time, yet retains some pliancy.

Road-going GTs don’t want for power, which they deliver through a seven-speed dual-clutch automatic gearbox. There is ABS too. No such conveniences in the race car – but the six-speed pneumatic sequential, which would be too harsh for road use, delivers power brilliantly.

Is this one of the Ford GT racers that won Le Mans in a class it didn't actually qualify for? - The class for production GT's, when Ford were still a year away from actually producing the road version?

Or is this one of the Ford GT's that was disqualified from Le Mans for running an illegal oversized fuel tank?

I find it impossible to get

I find it impossible to get excited by any car that has restrictors.
Peter Cavellini 24 November 2019

Must have been a red letter day driving this car, a race at that......