The new Skoda Kodiaq vRS, which features the most powerful production diesel engine in the Czech firm's history, is priced at £42,870, the company has announced.

The flagship Kodiaq costs £17,100 more than the entry-level Kodiaq SE and goes on sale in spring.

The model is the first SUV to feature the high-performance vRS badge, and company boss Bernhard Maier called it “the new spearhead in our SUV offering".

The Kodiaq vRS, which will be offered with either five or seven seats, features a 237bhp 2.0-litre biturbo direct-injection diesel with 369lb ft from 1750rpm to 2500rpm. It has a claimed 0-62mph time of seven seconds and top speed of 137mph. Skoda claims it has fuel consumption of 47.1mpg and CO2 emissions of 157g/km, both measured on the soon-to-be-replaced NEDC cycle.

The Kodiaq vRS sports a number of subtle design tweaks to differentiate it from the regular model, including bespoke front and rear bumpers, vRS logos, gloss black bodywork elements and a new design of 20in alloy wheel. The car also introduces Skoda's redesigned vRS logo, which now has a red V and stripe ahead of the RS, in place of the green currently used. This logo will replace the current logo on all vRS models in the future. 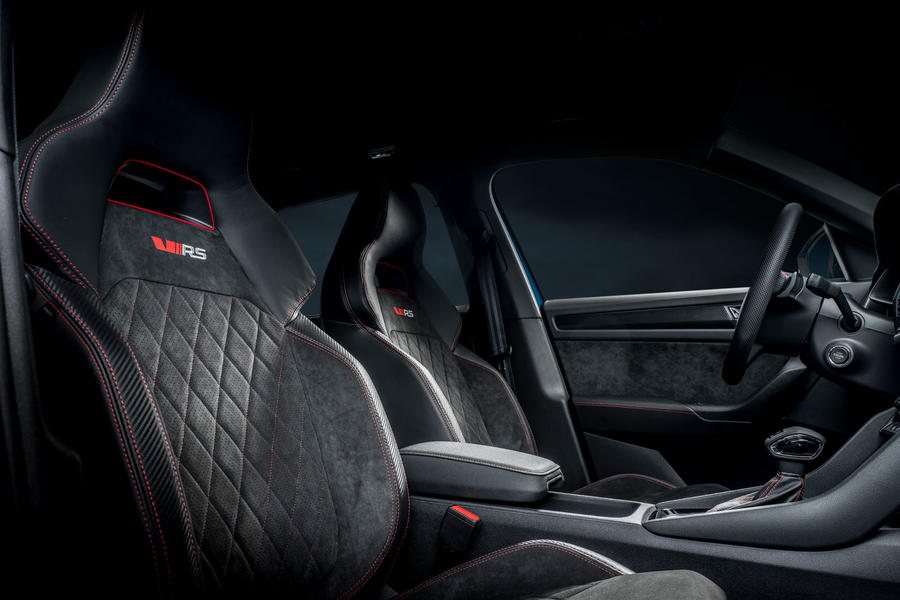 Inside, Alcantara-covered seats and door trims are standard, along with a carbonfibre-effect instrument panel. Ambient LED lighting, tinted windows, a black roof lining and stainless steel pedals also help the vRS stand out from a regular Kodiaq.

Skoda’s version of the Virtual Cockpit system is included as standard, and features a bespoke display mode showing a rev counter and speed in the centre of the display. There’s also a sports steering wheel.

The dimensions of the large SUV are unchanged, including the 600-litre boot in five-seat mode (231 litres in seven-door form).

It will be the second model in Skoda’s vRS line-up, which currently only consists of the Octavia vRS. The UK and Germany will be sales hot spots for the performance-biased Kodiaq given that, in Britain, 20% of Octavia sales are of the vRS version.

The brand previously sold a Fabia vRS, before ending production in 2013 due to poor sales. However, Skoda is understood to be planning a return to the hot hatchback market with a Fabia vRS hybrid in 2020.

The Kodiaq vRS has lapped the 12.94-mile Nürburgring in 9min 29.84sec, a lap record for a seven-seat SUV around the famous circuit, and only 1min 38:14sec slower than the Alfa Romeo Stelvio Quadrifoglio, which currently holds the SUV lap record. Famed 'Ring driver Sabine Schmitz was behind the wheel of the Kodiaq.

It was the, it cost £17k more than the base model that I found most shocking, but then I thought about other cars, a base civic to a type r, or base golf to an r etc and there's loads with similar price hikes for top spec models. So not quite the sensational price difference I first thought. Not a fan though but I'm sure it'll sell well as all suvs seem to.

You'd also have a car that's still slower, with no warranty, no insurance (unless you paid extra negating any tax advantage), no 4wd(?), no expensive vRS suspension to cope with the extra power and keep the car safe, and none of the other extras you get with the vRS.

Not a clue about the real world.

The insurance levy is peanuts, the 150 is 4x4 and has adequate brakes and suspension, and actually can be safely boosted to about 230 bhp anyway. Plus its nice toshock a few people with a q car sleeper.

Skoda are losing the plot.

I have owned a few recent Skoda’s and I no longer recognise the brand.

Not very impressive, considering Sabine Schmitz also did 10:08 in a Ford Transit. In 2005.