This is Skoda’s first deployment of its performance vRS package on an SUV. Perhaps surprisingly given the awkward noise around diesel part-created by its owner, Skoda has chosen an oil-burner as the motive force for the vRS.

For sheer effectiveness, the choice of a twin-turbo, balancer-shaft 2.0 TDI engine is easy to understand. Its 237bhp is promisingly strong, and its 369lb ft peak torque stronger still. The TDI is coupled to a seven-speed DSG transmission that serves a fine spread of ratios to all four wheels, the rear axle engaged on demand by an electronic clutch; up to 85percent of the torque can be directed to an individual wheel.

Electronic differentials are provided for both axles, and in an effort to counter the rather unedifying sounds of a diesel, this Kodiaq has what Skoda calls Dynamic Sound Boost, which alters and adds to the exhaust note using signals from the engine management, these adjusted to suit the chosen driving mode.

There’s no missing the Kodiaq’s key vRS identifiers, outside or in. Large, big-holed, deep-sculpted two-tone 20in alloys fill this Skoda’s wheel arches to striking effect, these by far the easiest means of recognising the model. Skoda’s design department clearly decided that wheels would be the key method of telegraphing this Kodiaq’s sporting mission, chief designer Oliver Stefani reckoning that, "the Škoda Kodiaq is an SUV with a very well-balanced and expressive design. The silhouette is very dynamic, so it was not that easy to add even more sportiness when designing the Kodiaq vRS."

Nevertheless, there are alterations, including resculpted bumpers, the vRS trademark full-width reflector and more assertive exhaust pipes. LED lamps are standard, and the red-painted calipers of the upgraded brakes you’ll easily see through the gaping alloys.

Red detail highlights are a general theme, but inside you’re far more likely to notice an inviting pair of sports seats and their Alcantara upholstery. Despite the sports theme you can order the vRS with seven seats. The VW Group’s excellent infotainment system is the centrepiece of a neatly unostentatious dash featuring a configurable instrument and message centre complete with additional sat nav display. In the centre console are off-road and snow buttons for the transmission, these complementing the seven driving modes of Eco, Comfort, Normal, Sport, Individual and Snow. 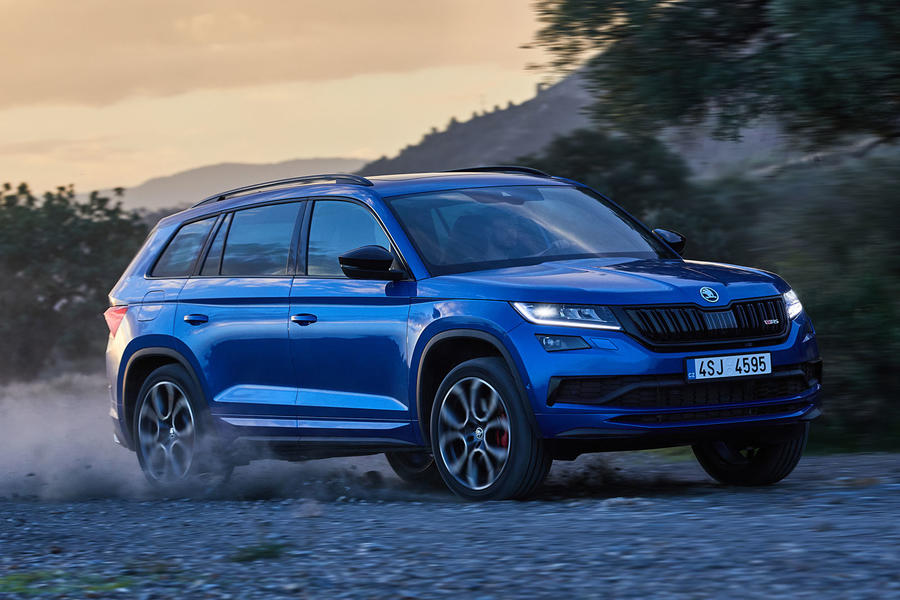 With those wheels and seats, the vRS is a lot more interesting to climb into than a lesser Kodiaq. These items give it a considerable lift, as does the quality of the upholstery, making this car a pleasure to occupy. That’s true in the rear, too, the capaciously supportive rear seats fronting an acre of legroom. Long distance journeys will be just fine back here.

It may look the part, it may have Dynamic Sound Boost, but this Kodiaq doesn’t feel very vRS at first. The default normal mode produces standard diesel sounds, admittedly subdued, and the transmission’s shuffle-up-to-eighth-asap strategy is as persistent as Theresa May. Economy will be optimised, no doubt, but the low grumblings of a four cylinder pulling tall gears at very low revs aren’t easy on the ear.

You can paddle shift your way to more agreeable sounds by holding the lower gears for longer, or give the gearlever a backwards flick into sport, which turns the Kodiaq a little less indolent, although some of the tones emerging from the Dynamic Sound Booster are slightly irritating. And it takes a committed throttle prod to extract some kickdown zip from the DSG, and it’s not always quick on the downtake, either.

Happily, these impediments don’t seriously obstruct the work of a diesel that’s almost creamily smooth, willing to rev and effective with it. The Kodiaq goes quite well when the best gear for undamming 369lb ft of torque is found. But if you think this might yield electrifying performance, you must recalibrate. The Kodiaq is big, 1880kg heavy, has a sizeable frontal area and fat tyres, all of them slightly dulling the frisson implied by twin turbos and 237bhp. It’s certainly not slow, this vRS, but it’s no replicator of Skoda’s vRS rally exploits, regardless of driving mode.

Press the button in question and the infotainment screen displays a confirmatory image, ‘snow’ producing a rather pleasing mountain scene, ‘normal’ a rather too real-world roadscape of urban banality and ‘sport’ a picture of a stretching motorway rather than the winding road that you might expect. That’s telling, because smooth, fast, open sweepers are what the Kodiaq vRS likes best.

It tackles these with some spirit and a sure-footed security reinforced by the steering wheel’s heftier rim-weight in sport. Tighter bends it manages efficiently, but without the athletic finesse of smaller, lighter vehicle, as might be expected given all that heft.

Nor is it surprising, when you contemplate those alloys and their thin-shouldered tyres, to discover that they’re about as absorbent as a prison mattress. You occasionally sense an underlying suppleness from the springs, but sharp bumps deliver a sharp ride, and a mildly turbulent one if there are camber changes. So this is not likely to be a car that rides British B-roads with much eptitude. Which is a shame, because odd synthetic resonances apart, this is quite a refined machine, and a great one for distance. That applies to four, five or even seven people.

There’s truly generous room in the rear and a finely upholstered bench, too, while the boot’s reasonably big and well-shaped unless seven are carried. 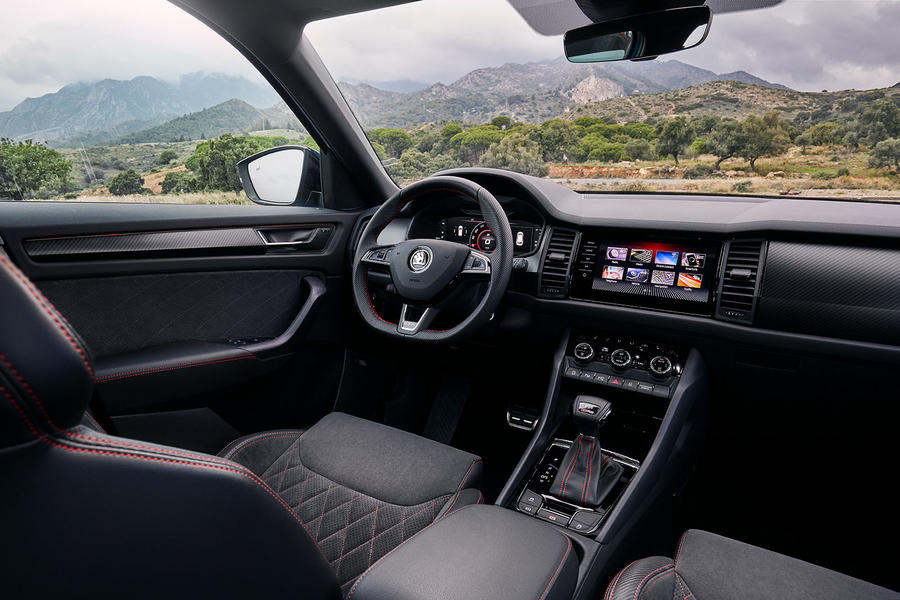 If you can live with the sometimes choppy ride and performance more solid than scintillating, the Kodiaq may tempt.

The sound booster is more annoying than inspiring, especially as this diesel is so smooth, but mostly this is a well-designed five or seven-seater providing a spacious, convenient cabin, strong cruising ability and confident handling. 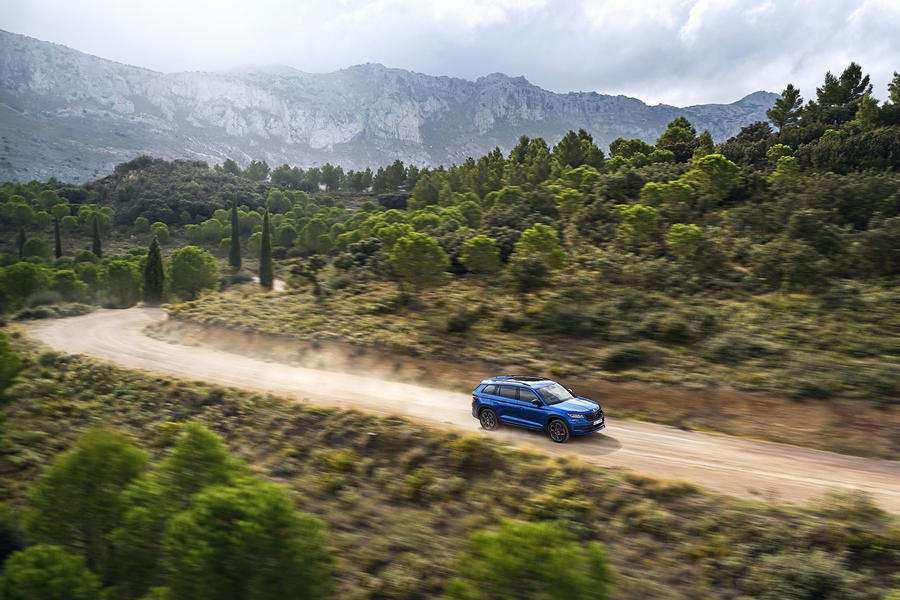 A car that performs well in

A car that performs well in the showroom and has weaknesses that don't really show up on a short test drive.  I'm pretty clued in but the last time I bought a car (used) the test drive on smooth roads didn't reveal a clonk in the front suspension.  A worn shock absorber which I twigged after I bought it - not too expensive but annoying.  Different story if you spend a lot on a new car and find out you really don't like the ride.

Instead of wasting the money

Instead of wasting the money on bling, fancy wheels and Red calipers, sound effects or sporty seats - why not spend it on some adjustable dampers with comfort/sport button instead so its one thing sometimes and the other when you need it to be. It would also make it a more discreet and appealing purchase.

Autocar Sort This Out

Autocar need to get a moderator on their comment pages urgently as there are more and more scammers and rogues like "ninatorres" advertising dodgy essay writing crap when they cannot even string a sentence together! Not to mention "christeena" who again can barely speak English but seems to want you click on a link that will no doubt relieve you of your bank account details. Or "bradleyrees" telling you how to translate. Badly. then there is "financemart" who one assumes is simply a fraudster. They include links in their posts presumably to phishing sites. Sort this out Autocar - by allowing these thieves and fraudsters on your site with impunity you are complicit in their dishonesty and treating your readers with contempt. Get these idiots off your site.

Autocar need to get a moderator on their comment pages urgently as there are more and more scammers and rogues like "ninatorres" advertising dodgy essay writing crap when they cannot even string a sentence together! Not to mention "christeena" who again can barely speak English but seems to want you click on a link that will no doubt relieve you of your bank account details. Or "bradleyrees" telling you how to translate. Badly. then there is "financemart" who one assumes is simply a fraudster. They include links in their posts presumably to phishing sites. Sort this out Autocar - by allowing these thieves and fraudsters on your site with impunity you are complicit in their dishonesty and treating your readers with contempt. Get these idiots off your site.

Or just embed Disqus like everyone else, which is miles better probably comes with auto spam removers...