BACK TO ALL NEWS
Currently reading: Audi E-tron Sportback: electric coupe SUV priced from £79,900
UP NEXT
Opel Manta A: 1970s coupe reborn as one-off retro EV

Audi has revealed prices for its second bespoke electric vehicle, the E-tron Sportback 55, will begin at £79,900 – a £9000 premium over the equivalent version of the standard E-tron.

The firm's new coupé-styled electric SUV is available from launch only in S-Line guise, which includes 21in alloy wheels, LED headlights, adapative air suspension and Audi Sport styling elements as standard. Prices rise to £85,185 for the limited-run Launch Edition, which gains its own set of bespoke sports wheels, contrasting black exterior trim, virtual door mirrors and a range of driver safety systems.

Revealed at the Los Angeles motor show last year, the coupe is the same weight, length and height as the E-tron and from the B-Pillar forward is identical. The lower part of the rear door, bumper and rear lights are also the same, while the obvious difference - the rear roof line - was cut from the A7.

That roofline makes the car slightly more aerodynamic than the E-tron, with a 0.25 Cd compared with the E-tron’s 0.27, giving the Sportback an extra 6.2 miles of range. 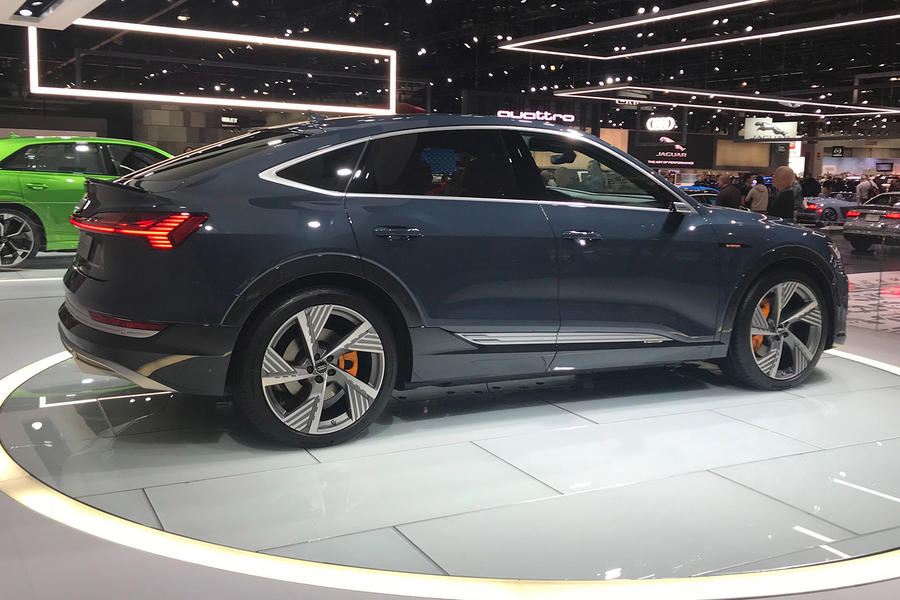 Changes from the E-tron include decoupling the front and rear axles so the model can be rear-wheel drive, which adds another 6.2 miles of range. Brake pads have been optimised with stronger springs so there’s no friction when not required, creating an extra 1.9 miles of range. Audi has also swapped two water pumps for battery cooling to one larger one, saving weight and cost and using less energy, which adds up to 1.2 miles of range. The useability of power from the battery has increased by 88% to 91% stage of charge, creating more than 6.2 miles of range.

While the E-tron Sportback will always have the advantage of a coupe roofline, all other efficiency tweaks will launch in an updated E-tron, revealed late last year.

The range-topping E-tron Sportback 55 delivers 355bhp and 414lb of torque from two electric motors and a 95kWh battery, achieving 0-62mph in 6.6secs. In sport mode, the model features a boost mode, generating 402bhp and 490lb ft of torque for eight seconds, hitting the benchmark sprint in 5.7secs. Audi claims, when braking, the SUV can recuperate up to 30% of its total range through regeneration. 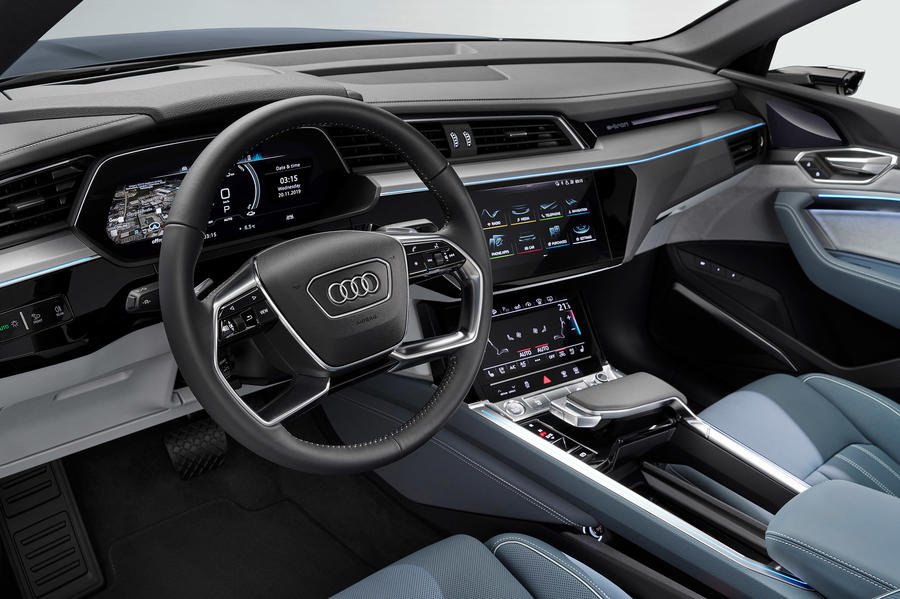 Inside, the E-tron Sportback is identical to the E-tron, featuring a dual touchscreen set-up angled towards the driver and optional virtual wing mirrors. The only differences are 20mm less rear head room thanks to the coupe roof line and 615 litres of luggage space, 45 litres less than the E-tron.

The model features digital matrix LED headlights, a first for a mass-production vehicle. It uses hardware found in video projectors, which is broken down into 1.2m micro-mirrors. Each can be tilted up to 5,000 times per second with the help of electrostatic fields. The lights illuminate lanes and adjust dynamically when the driver changes lane. It also draws attention to any pedestrians it spots.

The technology allows for projections when the car is stationary. By mid 2020, it will offer five different animations to greet you, which are projected on either a wall or floor. Audi light expert Stephan Berlitz  said: “We are starting a new era for lighting. In future, [this technology] could allow for car-to-car communications.” 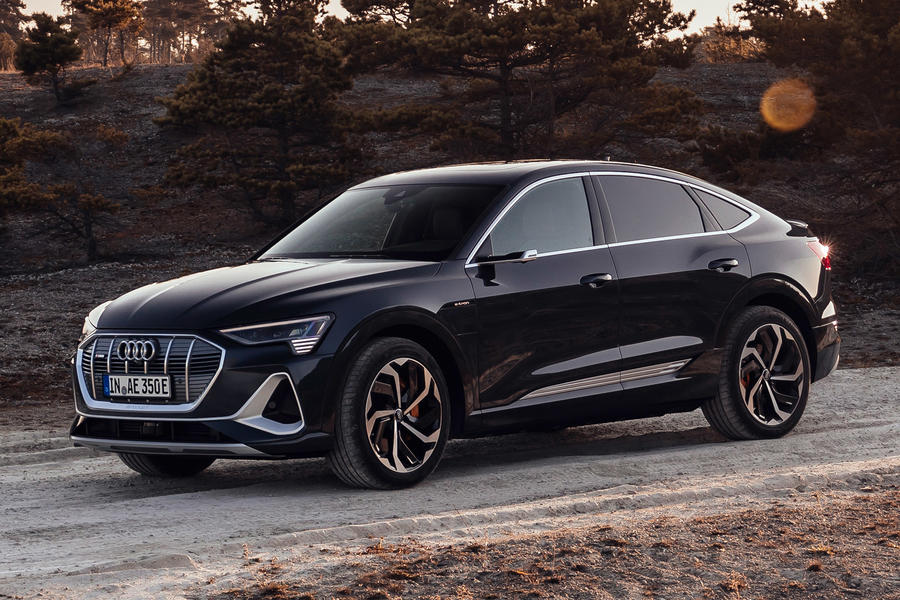 As with the E-tron, this model can be charged at 150kW fast-charging stations, giving 80% of charge in under half an hour.

Jens van Eikels, head of E-tron line, said Audi had considered a number of vehicle types for its second E-tron model. “We looked at some crazy things, A pick-up - that was very interesting, a three-box saloon but the coupe was definitely the best looking. We took the roofline from A7 Sportback. This model is very sporty and more progressive than the E-tron.”

When asked if we would see a hot E-tron Sportback, he said: “We will tell you more at the beginning of next year. There could be something coming.”

Eikels added that no additional models planned on the MLB Evo platform used for the E-tron models. “We will build these cars in China [as well as elsewhere] with our partner FRW so we can split investment. We will make some money.”

That looks awful! Heavy SUV's are not the way to go.smaller lighter cars are what we need as the lighter weight will give great performance and better range, as we are all doomed to electric vehicles.Waiting now for the hybrid 992

Governments and Environmental groups are falling over themselves to introduce these, but realistically all these EV's are priced at over 50k, something has to change otherwise only people who can afford these cars will be driving in the future...

Audi does SUV coupes better than others, but.....

Of all the SUV coupes Audi nails the concept better than any other, but that doesn't mean to say the Q3 Sportback, E-Tron Sportback and Q8 are exactly stunners. Presence and distinctiveness, yes, elegant and good looking, no!