BACK TO ALL NEWS
Currently reading: New Audi E-tron Sportback seen ahead of debut next month
UP NEXT
Volkswagen committed to 'entry-level' ID electric models

New Audi E-tron Sportback seen ahead of debut next month

Audi will will start diversifying its electric car lineup with a second E-tron SUV, the Sportback, set to make its public debut at November's Los Angeles motor show.

The more style-focused sibing to the regular E-tron quattro SUV has been undergoing hot weather testing with barely any disguise, allowing us our best look at the car's coupe-influenced design.

UPDATED: The Audi E-tron Sportback has been officially revealed at the LA motor show - read the full story here

The with sportier styling is designed help it challenge the likes of Jaguar's I-Pace. As well as the more steeply raked rear windowline, it features a lowered stance and a bespoke rear-end profile. 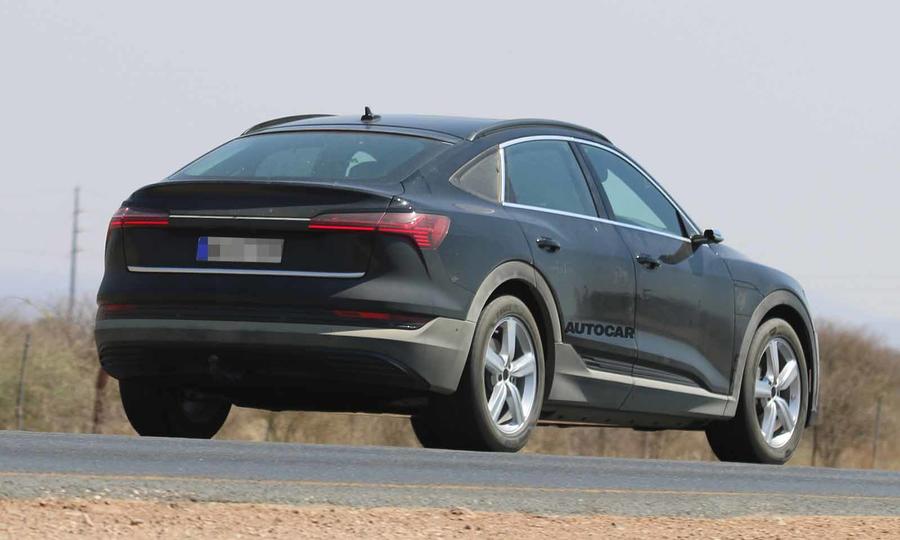 The car sports a more traditional front grille design than the Sportback concept that made its debut at 2017's Shanghai motor show. It does, however, retain digital rear-view cameras in place of traditional door mirrors as first seen on its E-tron sibling.

The E-tron Sportback appears to use the same kind of rear LED brake light bar first introduced on the A8 limousine and which is quickly becoming a staple of premium Audi models.

The concept mixes the lines of a liftback with the stance of a four-seat SUV to create what the brand describes as “a new class of car” that will attract buyers who might have previously considered an A7 Sportback but want a more commanding view of the road. The E-tron Sportback concept sits on 23in alloy wheels.

Opinion: electric cars like the Audi E-tron are leading a design revolution

The production version of the E-tron quattro produces 402bhp and 487lb ft in Boost mode, where it achieves 0-60mph in 5.5sec. The E-tron Sportback is likely to have similar performance.

It will also be capable of the same 150kW charging rate as its sibling, which is already among the best rate of any EV on sale. Expect a range similar to the 248 miles offered by the E-tron, perhaps aided sightly by better aerodynamic performance.

Several variants will evetually be produced with differing power outputs from the motors. Given the E-tron's £71,000 launch price, the SUV-coupé could start at around £75,000.

What are the advantages of using the three-motor arrangement?

“This powertrain is very dynamic. During full acceleration, the car sends more power to the rear wheels. In Sport mode, there’s more power at the rear axle all the time. You also have five modes of throttle response – from efficiency to performance – that you can adjust, much like the Drive Select system in our regular cars. Even when the car is in [front-wheel-drive] efficiency mode, all three motors still recuperate energy.”

How have you ensured that the car’s electric powertrain can deliver fun?

“In two ways. Firstly, you have very fast acceleration, because more power is going to the rear axle where you have more traction [due to the weight transfer under acceleration]. Secondly, you have torque vectoring at the rear axle. It helps the car [to become more agile] on tight, curvy roads. This car will drift; I’ve done it!”

The car’s four-wheel drive system is reactive. When will we see a proactive one?

Will we see an hot version?

“It’s something we all want to do, and it is possible to get RS performance from this powertrain. It would need a top speed like an RS model; we could use gears for that.”

E-tron one of twelve electric Audis to launch by 2025

Another yawn a thon from Audi, ever feel like you've been cheated....

Another yawn a thon from Audi, ever feel like you've been cheated....

Two and a half years since my last comment, Audi have got rid of the stupid wheels and taken the flexibility  afforded by an electric platform to produce ... drumroll ... probably the dullest derivative heap of Audi of all time. What's the matter with them? Have their designers all got bored with car design – bored with life? What happened to that bloke who designed the original TT, a breath of fresh air (apart from the exhaust fumes of course).Sack them all and hire a few graduates from the Little Gidding school of Art. And find someone who isn't colourblind. Grey/black is no longer cool, it's BORING.