The second-generation Audi Q3 is a larger, more substantial-looking and generally more serious second swing at compact SUV segment dominance from Germany’s car brand of the four rings. It’s also yet more fresh meat for the apparently unstoppable conveyor belt of downsized, upmarket ‘soft-roaders’ that, over the past 12 months or so alone, has brought us the Volvo XC40, BMW X2, Jaguar E-Pace, Lexus UX and DS 7 Crossback, as well as the second-generation Range Rover Evoque. And those are just the ones from premium car makers; with only a fortnight of 2018 remaining, we’d better not start on the rest.

With that much fresh competition out for a share of a growing haul of spoils, Audi clearly didn’t feel it could leave much to chance this time around. And so where the original Q3 looked more like a Nissan Qashqai-sized crossover hatchback, this one is larger and squarer than its forebear, as well as roomier and more grown-up.

You can tell as much at first glance. The old car’s ‘fast’ sloping rear hatch and its relatively dainty features have been replaced by a larger, more upright and SUV-typical outline, and a frontal aspect with more of what you might call a big Audi glower.

Audi says this design is more bold and daring than the last (well, wouldn’t it just), pointing to the car’s interestingly carved shoulder line, its bracket-like headlight and tail-light settings, and its Q8-aping octagonal ‘single-frame’ radiator grille as evidence. To this tester, all that seems only dressing on a pretty ordinary on-the-eye meal – but one which, for all the apparent convention of its design, looks like it ought to be better-placed to do everything that owners will expect of it than the last Q3 ever was.

Moving onto the VW Group’s apparently omnipresent MQB platform, the Q3 has just launched in Audi UK showrooms. It comes with a choice of 1.5-litre 148bhp ‘35 TFSI’, 2.0-litre 187bhp ‘40 TFSI quattro’ and 2.0-litre 227bhp ‘45 TFSI quattro’ petrol engines. There will be two 2.0-litre turbodiesel options (148bhp ‘35 TDI’ and 187bhp ‘40 TDI quattro’), the cheaper of the two being available with either front-wheel drive or clutch-based four-wheel drive.

Trim levels will open at Sport and finish at fully loaded Vorsprung, although middle-rung S line trim is expected to account for just over half of UK sales and brings with it the usual sporty bodykit, 19in alloy wheels and lowered sport suspension.

And since the first cars on UK roads are all 35 TFSI S line derivatives with front-wheel drive and seven-speed twin-clutch ‘S tronic’ gearboxes, that’s what we looked to for our first UK driving impressions. 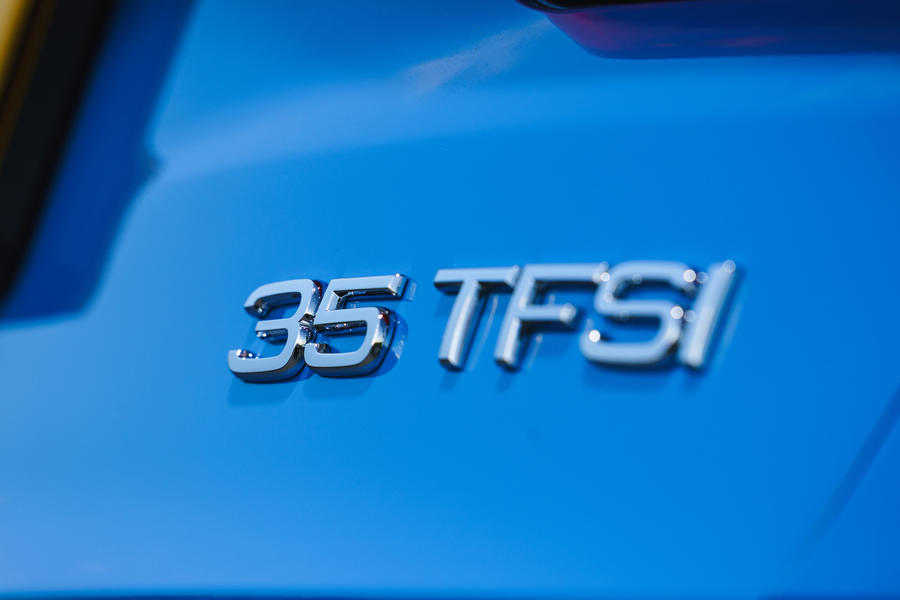 Surprisingly roomy inside, with unsurprisingly smart, sculptural and classy-feeling appointments.

The Q3’s fascia is of a stepped, three-dimensional design and is shapely and interesting to behold, without jutting so far into the cabin that it seems to eat up passenger space. The surface on which the car’s steering column, digital instrument screen and central infotainment display are found seems to have been carved out of that sweeping, stepped, cliff-like dashboard, and is bordered by a fat chrome trim whose octagonal outline is a clever visual echo of the car’s front grille.

Mouldings are mostly very smart and substantial-feeling, switchgear almost exclusively expensive to the touch. This tester thought it a bit odd, therefore, that the interior doorhandles felt so plain, and the same pudgy soft-touch plastic from the roll-top dashboard wasn’t repeated on the top of the doors. But besides that, and a couple of untidy cubbyholes that might have looked better with lids, this seems a swish, ambient-lit, impressively tech-rich interior. 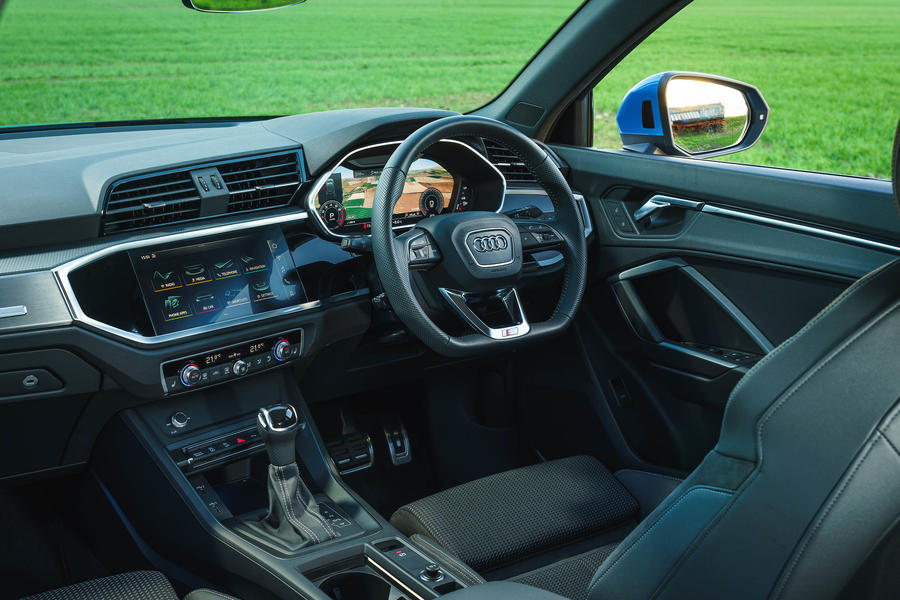 There’s plenty of passenger space up front, where even the S line-spec sports seats are comfortable and allow you to choose between a medium-high, SUV-typical driving position or a lower, more straight-legged one. And in the back, there’s now enough space for a six-foot adult to travel behind someone of similar height.

In the boot, meanwhile, you’ll find a useful-looking 530 litres of cargo space behind the back seats; and, if you have an S line trim car, a sliding second-row split bench allows you to expand that to 675 litres if you want to without flopping seatbacks. There’s also a split-level boot floor allowing you a flat loadbay floor when you need one.

And so, having been well below par on practicality by compact SUV class standards, the Q3 is now comfortably above that level. It now seems like a pretty versatile, usable car for a young family. Trading up into it out of an A3 Sportback would seem like a useful upgrade on space and convenience; giving up a Mazda CX-5 or a Ford Kuga for it wouldn’t seem like a practicality compromise. That’s where this car needs to be – and where it fell down previously.

Our first drive in the Q3, undertaken abroad, was in a test car with the same 1.5-litre engine and seven-speed paddleshift gearbox as this, but in cheaper, comfier-riding Sport trim. That experience left us disappointed with the car’s entry-level powertrain, which seemed hesitant to kick down and quite mechanically unrefined.

But on UK roads, perhaps because Audi’s European launch cars weren’t in final production specification (although that’s entirely supposition), the Q3’s engine and gearbox would be harshly criticised on at least one of those scores. The 1.5-litre 35 TFSI engine is smooth and civilised at cruising revs, and while it becomes a little bit harsher and more intrusive above 4000rpm, the torque provided by the turbocharger means you only need to go there when occasion calls to accelerate hard.

Having said that, you certainly wouldn’t accept this car with any less potent an engine. Even with the extra intermediate ratio that the car’s twin-clutch gearbox gives you, there’s a limited amount of outright oomph here for overtaking, steeper climbing or for getting up to motorway speed; and, for the reasons we’ve already mentioned, there’s little pleasure to be taken in making the engine spin.

Just as it did abroad, the Q3’s twin-clutch automatic gearbox seems reluctant at times to kick down as you probe into the accelerator travel. But if you calm your hurry and simply move along with the traffic, the motor’s voice fades away to a very muted background presence, and the gearbox shifts up early and declutches often to produce better-than-40mpg quite easily through the daily grind. As an engine for a thrusting, sport-sprung, family-sized modern Audi, then, the Q3’s 35 TFSI certainly isn’t everything some will hope it might be; but as the entry point in a range of powerplants that should offer several variously more assertive performance levels, it’s drivable and rounded enough.

There’s a decently rounded and liveable feel, also, about the Q3’s ride and handling – even on UK roads, and even in this passively damped, sport-suspended form. Our test car had standard 19in alloy wheels and dealt with coarse and broken surfaces unobtrusively. Although it rides a little firmly and isn’t immune from the odd bout of fidgeting on an undulating surface, the Q3 settles to a fairly tranquil UK motorway and A-road stride and handles tougher, lumpier B-roads with competent composure. In this form, the Q3 certainly isn’t a car that makes you feel particularly isolated or removed from the road surface, and it doesn’t have the suppleness that some might expect from an SUV – but on both scores, it might have fared differently if differently equipped.

There isn’t much driver appeal to report. The Q3 is more grippy, taut, precise and direct in its handling than the compact SUV class average and it handles well in outright terms, but it sets about engaging its driver in too predictable, clinical and calculating a way to be particularly successful. Hardly a conspicuous failing in a car of this kind, admittedly, but something Audi’s S- and RS-badged versions of the car, assuming both will be forthcoming, will need more than just extra power to address. 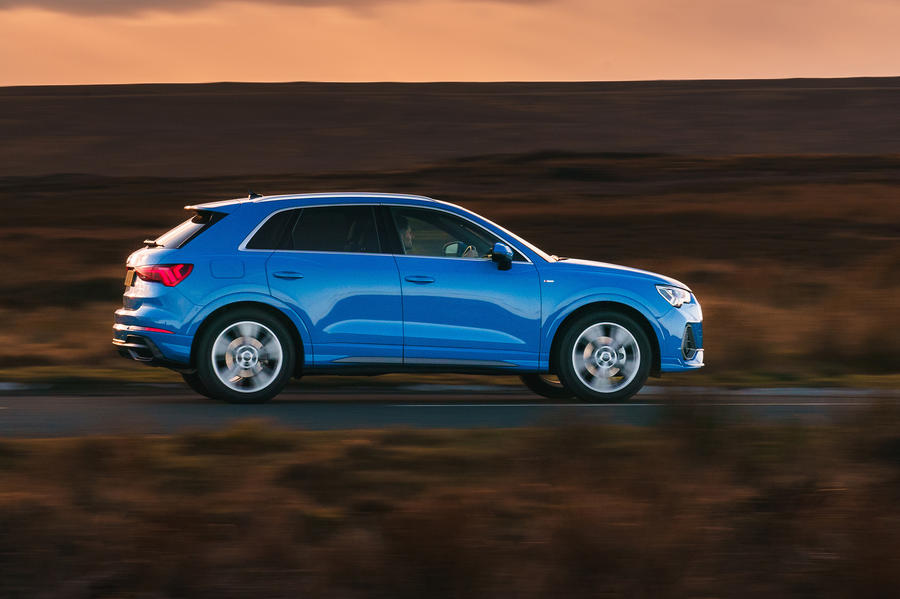 Audi claims this engine will be the most popular among UK Q3 owners – but, on this evidence, I’d be surprised if that proves to be the case. Although refined, slick and pretty economical when left to amble along, the 35 TFSI doesn’t give this car much of a turn of pace, nor the sense of multi-modal versatility you might be looking for in premium-branded family transport. I strongly suspect either a 2.0-litre turbo petrol or turbodiesel will suit the car much better.

But entry-level engine notwithstanding, there should be little else that really matters in a compact SUV that the Audi Q3 fails to deliver. It doesn’t have the charisma of a Volvo XC40 or the zesty dynamism of a BMW X2, but it doesn’t have the vices or shortcomings of its predecessor, either. The completeness of so many of Ingolstadt’s full-size models may be just a better engine away. 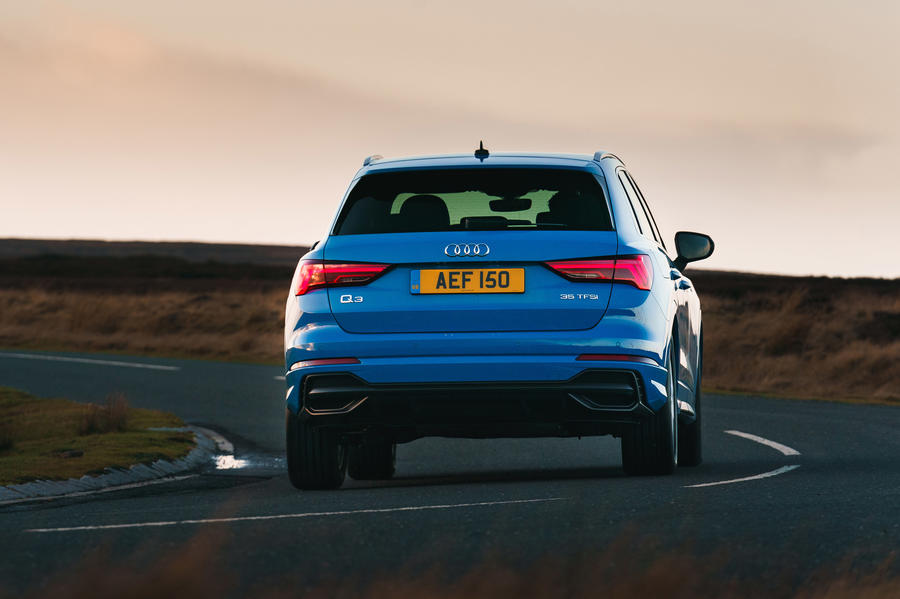 I have huge crush on Audi Q3

I’m in love with this second generation of Audi Q3 and after reading your descriptions I feel it totally worthy to go for it. Especially, its extremely spacious interior much more attractive than the rest. I was looking for some quality papers and this article just made my day.

I have a current Q3 1.4. Although a comfortable car I find it lacks a "fun factor" to drive. It does lack oomph to coin a term. If I were to buy another one I'd definitely go for the 2 litre 190bhp version. Shame that one has to buy a Quattro to have that engine.

You make me laugh

Actually I would choose the one I like the most if costs didnt matter, I wouldnt choose a premium badge for the sake of it. As such I can see why people might choose a nissan or seat over this audi. It's all personal preference. With the vag cars all being so similarly competent, I would probably go seat as I think it looks better. In fact we did, we bought a mii over a more premium badged up, because  it looks better.

I wouldnt choose a premium badge for the sake of it.

I agree. Cars are so well built and put together these days that premium brands offer no substantial advantages. What's more, Audi often nolonger represents the best design in the VAG range.

We're not all Hyacinth Bucket types.