BACK TO ALL NEWS
Currently reading: 302bhp Mini JCW GP is maker's fastest model yet
UP NEXT
Volkswagen unveils larger and more advanced new Amarok

Mini’s fastest road-going model yet, the John Cooper Works GP, has been revealed at the Los Angeles motor show ahead of UK deliveries starting in March 2020.

Externally, the most notable additions are a giant roof spoiler with double-wing contours, a new front apron design and special wheel-arch extender panels that are made of lightweight carbonfibre-reinforced plastic and dubbed ‘spats’ by Mini engineers. 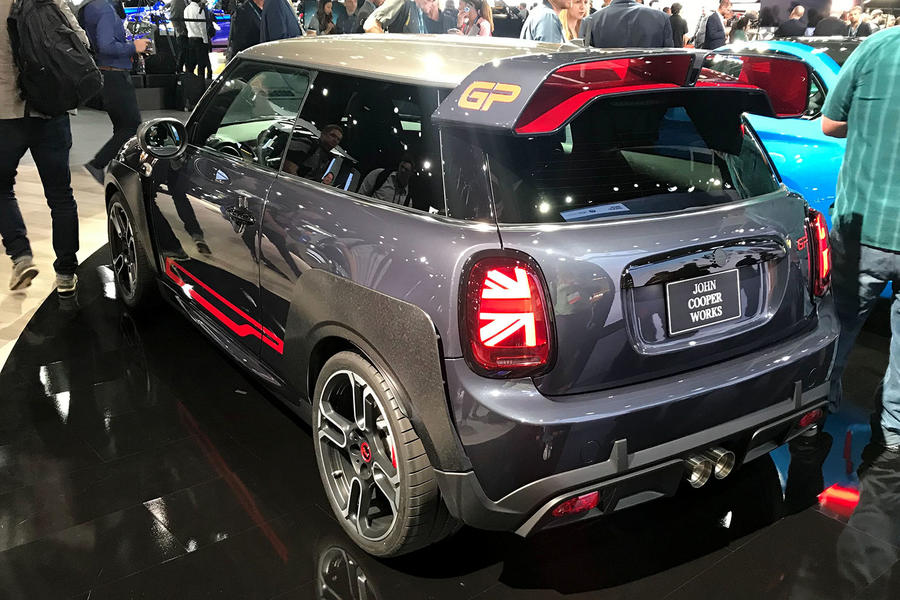 The material for the spats is recycled from the production process of the BMW i3 and i8 of Mini parent company BMW. With an exposed matt finish, the front arch panels each feature the car’s specific build number. The body itself is available exclusively in metallic grey, with silver and red details.

Most of the GP’s extra power is achieved with a new turbocharger. The motor’s compression ratio is reduced to cope with the extra boost pressure, and a new intake duct and new multi-hole injectors – with up to 350 bar of pressure – also feature, as does a GP-specific oil sump.

Power is put to the front wheels only through an eight-speed automatic gearbox with steering-wheel-mounted shift paddles. A mechanical differential lock helps to channel the healthy power output smoothly.

The GP’s body structure is said to be “extremely rigid” (though no percentage increase is quoted), with new supports, members and strut braces. The suspension was developed from extensive Nürburgring testing. The track widths are increased and the body is lowered by 10mm over the standard JCW, while a host of new parts and extra front camber reduce roll and improve grip. 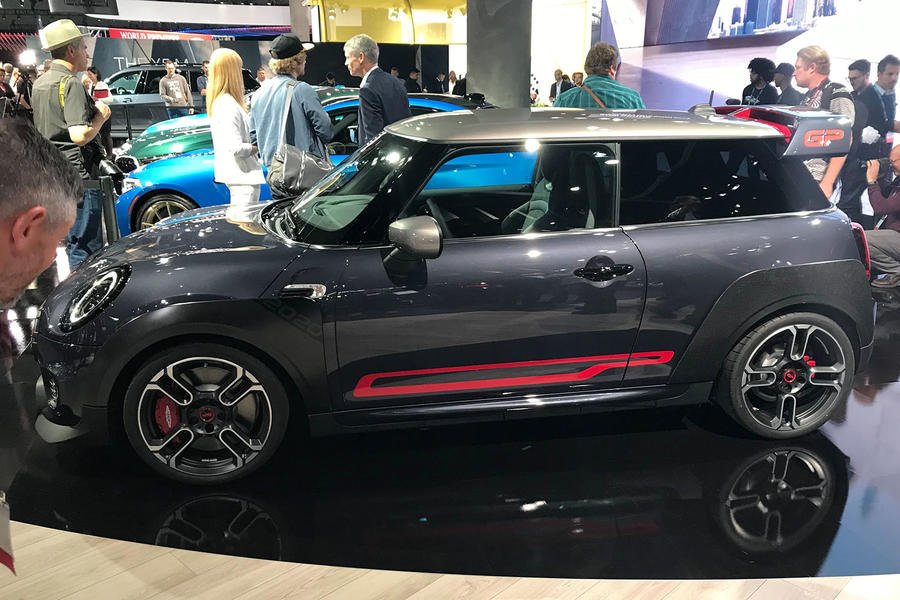 Inside, there are just two seats. Combined with less acoustic insulation, the shedding of its rear seats contributes to a reduced, 1255kg kerb weight – 85kg lighter than the normal JCW. New 3D-printed honeycomb metal shift paddles feature and 3D printing has also been used for the passenger dashboard panel, where the car’s build number is displayed.

Despite the pared-back approach, the GP can still be specced with sat-nav, wireless charging and heated front seats. It also gets the digital instrument cluster from the Mini Electric as standard.

It should be manual

It should really be manual just like the Trophy R and the Clubsport S. That box seems to defeat the purpose and ditching it would have also saved weight. Another tenth to 60 wouldnt have mattered.

Yeah, why no stripped out light weight Car, even some carbon fibre body panels, not possible?,Porsche has been getting away with charging more for less for yonks!

its truly awful,  if all those wings and spoilers are needed to keep it on the road with only 300bhp, its shows how poor the original design is, if they are just for show, its proves how bad the designers are, I also suspect it would struggle to live with the latest Focus ST and not be as much fun to drive or as easy to live with.

its truly awful,  if all those wings and spoilers are needed to keep it on the road with only 300bhp, its shows how poor the original design is, if they are just for show, its proves how bad the designers are, I also suspect it would struggle to live with the latest Focus ST and not be as much fun to drive or as easy to live with.

I don't dislike it, but no I wouldn't have one, the spoilers are probably like the civic type Rs, designed for downforce at high speeds, the civic is only? 300 odd bhp as well and all the aero has a purpose, so I see no reason why it shouldn't on this mini. It's no st or rs, it's more niche than that, and it will probably be immense fun.