BACK TO ALL NEWS
Currently reading: New Mini Electric revealed as affordable Brit-built EV
UP NEXT
Y the obsession? The most prolific BMW Mini collectors

Mini’s long-awaited first attempt at a mass production electric car has been revealed, mating the brand’s classic three-door hatchback with an electric powertrain offering Cooper S performance in a package claimed to be more affordable than every rival.

It has been dubbed the Mini Cooper S E in markets outside the UK, but the brand has chosen to retain the Mini Electric name in Britain to avoid confusion and clearly differentiate it from the standard range. However, the Cooper S badges will remain (alongside new E badging) to denote the performance level. 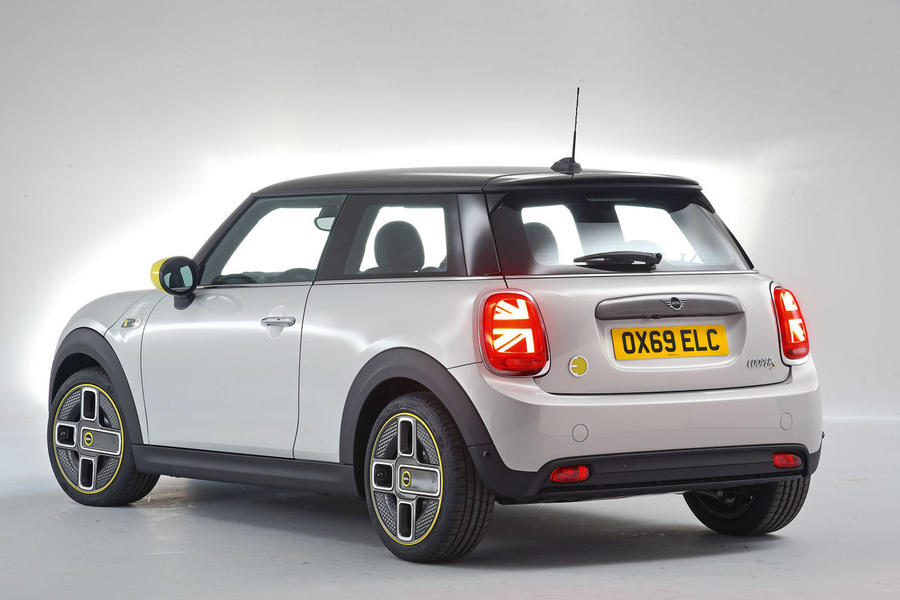 The most significant development, however, is the car’s relatively low price point: including the government grant for electric vehicles, it will start from around £24,400 – said to be less than an ‘equivalent spec level’ petrol Cooper S.

Mini claims development of the Electric involved balancing the car’s ability to travel an acceptable distance on a charge for a car aimed at cities with the desired performance level and aggressive price point.

The compromise that results is a WLTP-certified range of 124-144 miles – about the same as the Honda E, but less than more mainstream rivals such as the Peugeot e-208 and Vauxhall Corsa-e. It achieves this through a powertrain taken from the BMW i3s, making 181bhp and 199lb ft of torque.

That’s mated to a 32.6kWh battery mounted beneath the passenger seat in a T-shape. Unlike the i3, the motor powers the front wheels only. Resulting performance is strong for the class: 0-62mph takes 7.3sec, with the top speed limited to 93mph. Mini says it is also capable of charging from flat to 80% in 35 minutes via a 50kW charge point through a standard public charging cable. Via an 11kW wall box, 0-80% charge can be achieved in 150 minutes, or 210 minutes to full.

The firm insists that the compact battery and modest range results in a car that rides and handles like a Mini should. The standard car’s three driving modes – Green, Mid and Sport – are retained, while there is a new, more effective traction control system, dubbed ARB, that is said to stop the front wheels spinning power away or losing grip before it happens. 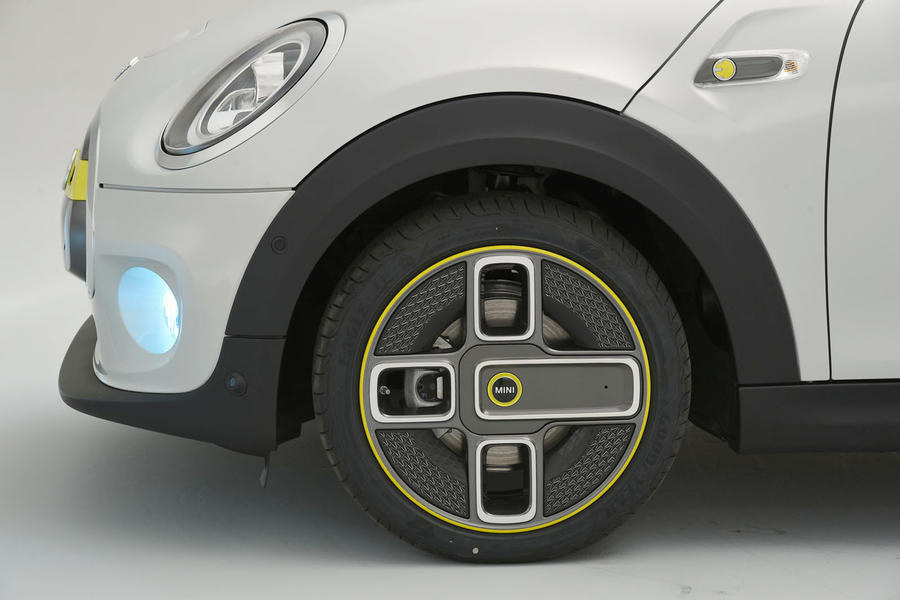 The Mini Electric’s exterior styling sees the three-door Mini adapted with unique details rather than receive a totally new look. Product manager Chris Himsworth told Autocar that the decision to adapt an existing shape rather than do something unique was always the intention. “We always wanted this car to look conventional,” he said.

“Other EVs can be quite polarising, and the customers are put off by the design. But we’re hoping the familiar character of the Mini, combined with the benefits of electric drive, will be a strong draw. Customers can make their Mini Electric stand out more or less by their choice of colour and wheel combinations.”

The standout change at the front is the grille, a blanked-out grey and yellow design that adds 17mm to the length of the car thanks to pedestrian safety regulations. The brighter hue, dubbed Energetic Yellow, is optional and can be added to the grille, door mirror caps and wheels, as is the case in these pictures. The AC and DC charging ports are located where the fuel filler cap would otherwise be.

Also new is the front bumper design with a splitter element, while the rear bumper is redesigned as it no longer needs to accommodate the exhaust. The distinctive wheel design of the model in the pictures is designed to look like a British plug socket, although a variety of more conventional designs are available. 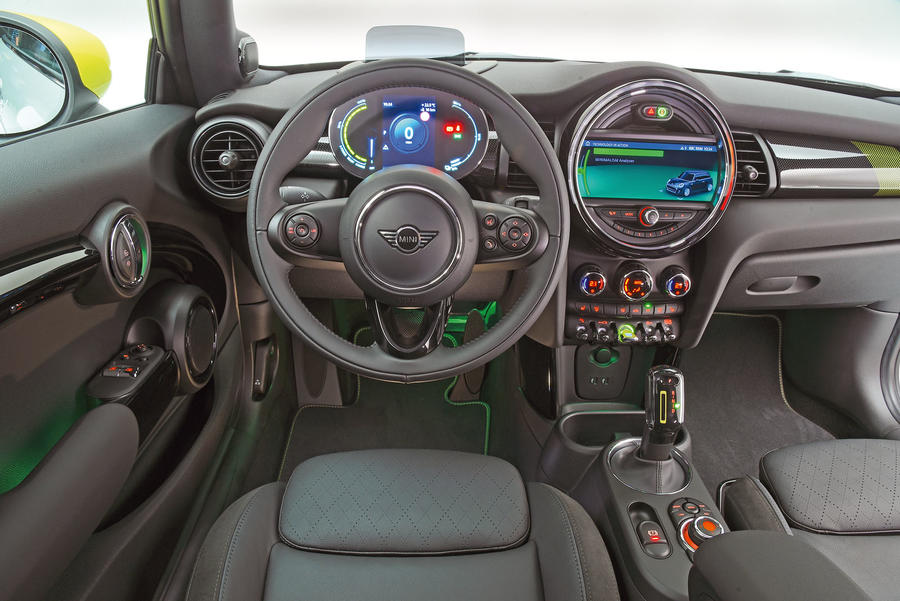 The Mini Electric also sits 15mm higher than the combustion-engined model to allow clearance for the battery pack. Designers have extended the plastic wheel-arch cladding Interior is only subtly different to non-EV Minis to compensate. Mini claims the design changes are deliberately undramatic – partly due to a desire to keep the model at as low a price point as possible, but also to keep traditional Mini customers onside.

Interior upgrades are similarly subtle, with the focus on it being “instantly familiar”, according to Himsworth. Chief among these is a new digital dial display, available for the first time on a Mini. It displays the car’s speed, range, power reserve and charging status, though the displays are not configurable. It will be rolled out across the rest of Mini’s range in 2020.

There’s also an electric handbrake for the first time in a three-door Mini, but the only other differences are a new toggle switch for the multi-level brake regeneration system and yellow cabin detailing. The firm says that the interior and boot space is largely unaffected by the new powertrain. Three trim levels are offered, all yet to be named. The base car gets sat-nav with real-time traffic data that can locate available charge points, dual-zone air-con, LED lights, the digital instrument display, cruise control and three years of free Apple CarPlay. Moving up to mid-spec raises the price by £2000 but includes new kit such as keyless entry and start, heated seats, the driving assistant pack, part leatherette trim, a rear-view camera and parking sensors and an armrest.

The top trim adds a more substantial £4000 to the price but brings the larger 8.8in ‘XL’ infotainment screen, full leather, a panoramic glass roof, adaptive matrix LED lights, a head-up display and a Harman Kardon sound system. No details of the car’s warranty have been released, but Mini claims it will be “in line” with that of the BMW i3, which is eight years and 100,000 miles.

The Mini Electric will make its public debut at the Frankfurt motor show in September, with production commencing in November. The firm has managed to tool up its Oxford plant so both electric and combustion-engine models can be created down the same line. However, the first UK cars won’t be delivered until March 2020 because the firm will prioritise volume-selling EV markets such as China and the US.

Having just driven from Edinburgh to Plymouth on one tank of fuel in my petrol Clubman, this electric model is going to have to offer much better range before it becomes an appealing prospect for me.

How has it taken BMW 5 years

How has it taken BMW 5 years to put an i3 battery into a Mini? Protecting their investment in the i3?