BACK TO ALL NEWS
Currently reading: New Audi A3 seen undisguised ahead of early 2020 launch
UP NEXT
Exclusive: Morgan bosses detail ambitious growth plans

Audi is building up to the unveiling of one of its biggest sellers, the 2020Audi  A3, and prototypes have now dropped almost all of their disguise.

New spy shots of the car testing show the Ingolstadt brand is following the lead of the platform-sharing Mk8 Volkswagen Golf, which hit the headlines by shedding its camouflage wrap earlier this year.

We can see that the new A3 features an evolutionary look, borrowing the geometric front-end shape from Audi's latest models, and doesn't adopt the smaller Audi A1's bonnet vents. Yet there's one distinctive design detail we weren't expecting: chrome strips running the length of the bodywork on each side from the headlights to the tail-lights, wrapping around the tailgate.

It's not clear yet if this will make production or if Audi is just experimenting ahead of the finished design. But if it does appear when the car is unveiled, as expected, at next March's Geneva motor show, it will mark a distinct departure from the rest of the firm's range. 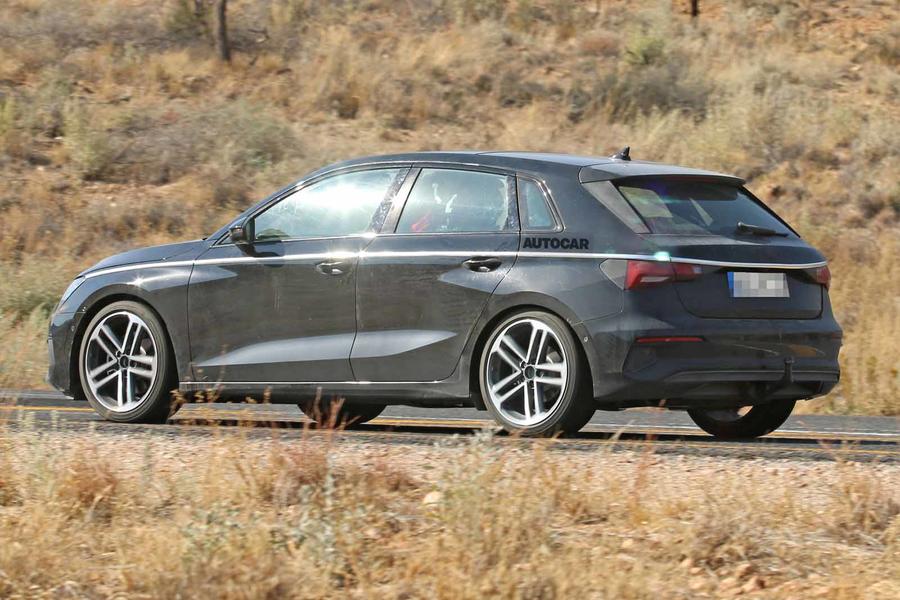 On the new car, which will be built on the second-generation Volkswagen Group MQB architecture first entering production in the Golf, Mindt said that the company “had some really good ideas” for its new staple hatchback, promising “it’ll change, big time”.

The new A3 is one of two new compact Audis in development, the other being an electric car built on the new MEB architecture. As before, the A3 will spawn a whole range of variants, including a new five-door liftback version to rival the likes of the Mercedes-Benz CLA and upcoming BMW 2 Series Gran Coupé. A disguised S3 hot hatch prototype has also been spotted testing.

Mindt believes that compact cars have a big future still, despite the rise of SUVs. “I can see growth of compact cars and a future, absolutely,” he said. “We have really good ideas for that segment and to push it.”

The five-door hatchback will be the first new A3 to arrive next year, replacing the model that was introduced at the 2012 Geneva motor show. The final variant will be the five-door liftback, which isn’t expected until 2021 – the third year of the fourth-generation A3’s lifespan. The regular hatchback will be longer and wider than the current model, with the same track width but wider wheel arches and carriers.

Facing fresh competition from the new Mercedes-Benz A-Class Saloon, the next A3 Saloon will be introduced in 2020.

The new A3's engine range will include 1.0-litre, 1.5-litre and 2.0-litre turbocharged petrol units, as well a 2.0-litre TDI diesel unit in three different states of tune. A plug-in hybrid model will also come, using the same driveline as the new Volkswagen Passat GTE. There won't be an electric version, though, because Audi is developing a dedicated electric hatchback model for release in 2021. Until then, the forthcoming Q4 e-tron SUV will be the brand's smallest EV.

The A3 Cabriolet, a small-seller within the Audi range, is the least certain for replacement, given the state of the convertible market and the discontinuation of C-segment Volkswagen Group products following the axing of the Beetle.

Audi plots A3 liftback coupe to take on Mercedes CLA

...why Audi bother with styling camouflage when testing their new models?

Also wondering whether these kinds of cars will sell in good numbers when people can no longer get PCP deals on them......either by political intervention to avoid another credit crunch or greedy manufacturers constantly increasing their prices to extortionate levels.

It looks the same as the old

It looks the same as the old one, and the one before that...

Maybe with an even bigger, vulgar grille and, of course, that strange chrome thing.

first we had Dieselgate now designgate school kids can do better job or sack VG CEO they are conning customers to pay moer for the same sad sad.

Tthe styling, if you can call it styling is very bland and just like a photocopy of Skod aand Seat ibiza the new Q3 Sportback looks way better ,If i wanted an A3 it would be the current one only.