BACK TO ALL NEWS
Currently reading: Morgan to reveal new entry-level model at Geneva
UP NEXT
2022 Mercedes-Benz EQE: images preview EV's radical design

Morgan will reveal an all-new four-cylinder sports car at the Geneva motor show, based on its new CX-Generation aluminium chassis.

The new model, likely to take the Plus Four name, has been previewed in an official image. Although it’s covered, we can see that the British company's trademark retro styling – including prominent raised front fenders and a vintage-style radiator grille – will be applied.

However, it's also apparent that the traditional headlamp bezels house modern LED units – as with Morgan’s new flagship, the Plus Six, which was revealed at last year’s Geneva show.

The new four-cylinder car will be the first to sit atop the CX-Generation chassis, which replaces the traditional steel ladder frame that Morgan has used since 1936. Its arrival comes following heavy financial investment from Morgan’s new Italian majority-owner, Investindustrial.

Morgan CEO Steve Morris said: “We recognise a need for a more resolved core product that meets both our customers’ needs and future legislative requirements. The advanced engineering of the new platform is a vital underpinning for the next generation of Morgan sports cars.”

Technical details remain scarce, but Morgan has confirmed that the entry-level model will be available with a manual gearbox. Given the company’s links to BMW, the turbocharged 2.0-litre four-pot featured in the Z4 sDrive20i could be the engine used.

In the Z4, this produces 194bhp and 236lb ft, which is enough for a 0-62mph time of 6.6sec and a top speed of 149mph. Any Morgan with the same powerplant can be expected to weigh considerably less and thus accelerate faster.

Last month, Morgan revealed that it will create 20 special editions of the outgoing Plus Four to commemorate the end of ladder frame production. Priced at £60,995 each, the limited-run roadsters have a metallic platinum-painted body and a gold-painted chassis. 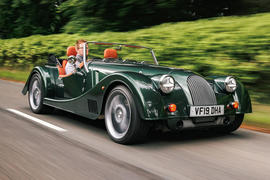 All-new Morgan feels like progress in lots of ways, and has a world-class powertrain, but also feels like it's not yet the driver’s car it might be

After buying a Plus 4 last year, I feel cheated. I want my money back Mr Steve Morris!!!!