From £38,7608
Share review
This entry-level roadster charms as an all-rounder, but is it the dynamic showcase BMW says it is?
Share
Open gallery
Close

But as we’ve already learned, not least from spending time in a development prototype and subsequently during a drive of the top-billing M40i version, BMW has put its back into making the third-generation Z4 much better to drive than its tepid forebear.

There are plenty of changes. The suspension has been re-engineered with a higher proportion of aluminium and there’s a new five-link set-up at the rear. The engine sits closer to the car’s centre of gravity, which is itself lower than before, and the front track is 98mm wider – a colossal increase. At the same time, the wheelbase has shortened 26mm in order to stiffen the aluminium-and-steel platform shared with the BMW 5 Series and the new Toyota GR Supra.

Arguably of equal importance to all that is the fact BMW has done away with run-flat tyres, the new Z4 instead wearing Michelin’s truly excellent Pilot Super Sports. Too much grip? We'll come back to that, but this is fundamentally a promising layout: traditionally front-engined and rear-driven, with equal weight distribution and a driving position now closer the car’s mid-point. 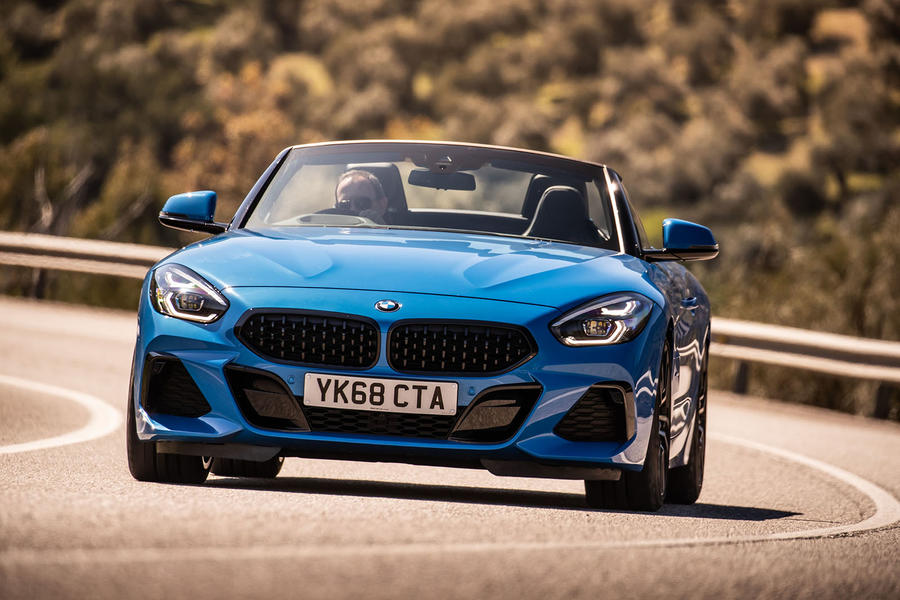 As it stands and will probably remain, with hybrid and proper M versions looking highly unlikely unless some BMW board member has a change of heart, there are three engine options, all petrol and turbocharged. The sDrive20i model tested here and the sDrive30i each get BMW’s 2.0-litre four-cylinder unit, respectively tuned to 194bhp and 255bhp for 0-62mph times of 6.6sec and 5.4sec. At the top of the range sits the Porsche 718 Boxster-rivalling M40i M Performance, which takes a 3.0-litre inline-six, mates it to the same ZF eight-speed automatic gearbox and duly drops the sprint time to 4.6sec.

All cars are well equipped, but as a quick run-down, here's what spending a bit extra over the sDrive20i Sport's £37,000 list price can get you.

Both Sport and M Sport cars are fitted with 18in alloy wheels touting an attractive degree of tyre sidewall, although the latter also gets M Sport suspension, an M leather steering wheel, a relatively restrained bodykit and, in the case of the sDrive30i, M Sport brakes. The M Sport Plus Pack – available on the sDrive30i but not the sDrive20i – adds the same adaptive M Suspension you'll find on the M40i. The other significant option is the Comfort Pack, which includes a heated steering wheel (crucial in our eyes), a useful wind deflector and through-load access from the boot. 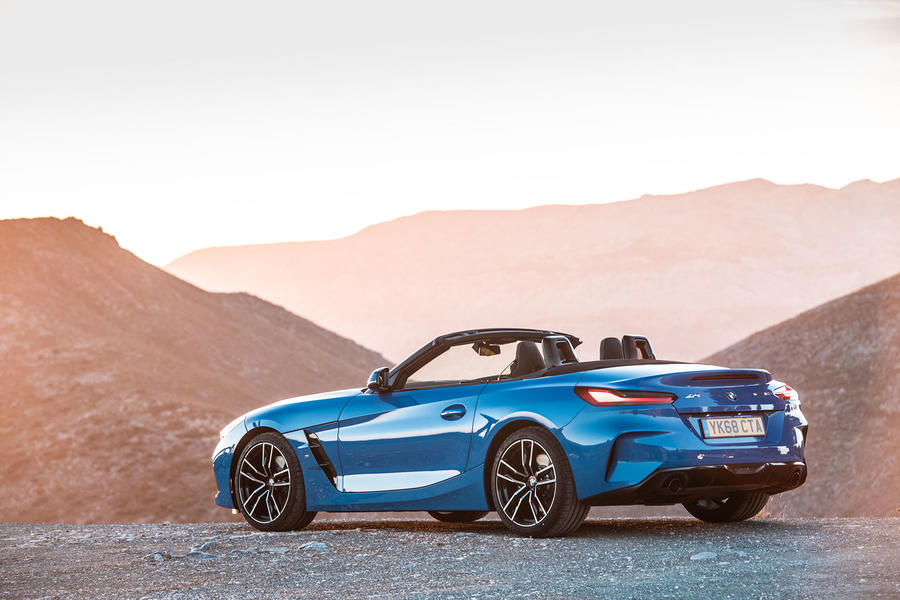 If you had to run a strict two-seater with a folding roof, would any rival slot into your daily life quite as easily as the Z4?

It’s doubtful. Without the need to store a folding hardtop, this car will comfortably swallow three good-sized duffel bags in its boot, and there’s a usefully large portion of storage space between the new M Sport seats and the rear bulkhead. Stowage up front is a bit limited and the cupholders sit awkwardly within the armrest, but it's decently spacious, and in this class to date, only Porsche has come up with a sensible way to secure one’s coffee cup without sacrificing functionality elsewhere.

The interior overall is a plush highlight, in fact, if also an indication that the Z4 remains more of a versatile, grand tourer-type roadster rather than a committed sports car. BMW could have done more to make the dashboard follow elegantly the contours of its new trapezoidal digital instruments, but the general layout is neat, purposeful and reassuring, with a level of perceived quality that makes you wonder whether BMW has out-Audi’d the Audi TT this time round. 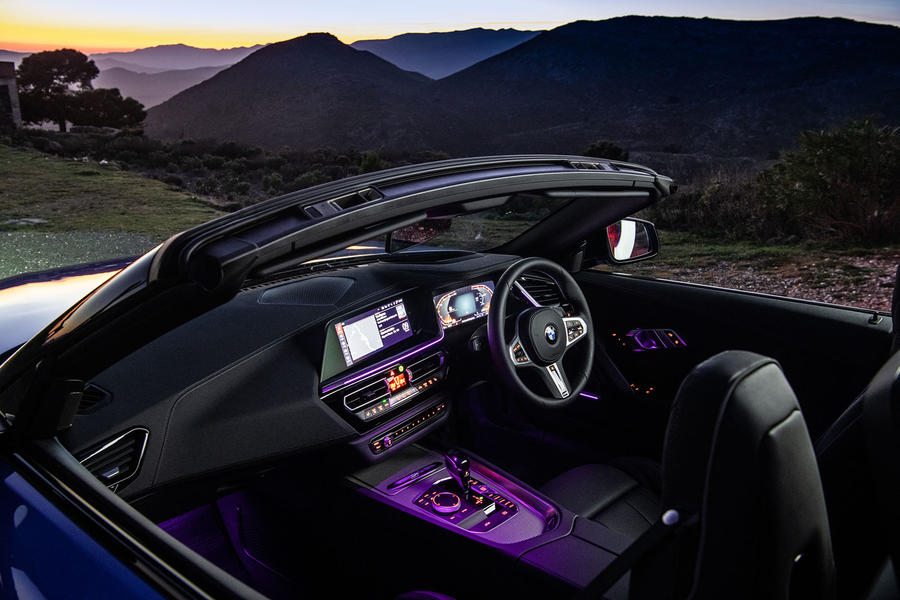 You might be surprised to learn the sDrive20i doesn’t return the favour and comprehensively out-BMW the TT when you throw at set of corners its way, however. Not in the Sport specification of our test car, at least, which was equipped with the standard passive suspension set-up rather than the firmer M Sport alternative (also passive) that most buyers will specify. These photos show an M Sport model, note, in fetching Misano Blue. BMW didn't provide photos of the Sport, despite there being no M Sport for us to test.

The first reason for this potential upset is that the TT, while still not what you’d call dynamically expressive, is now a fine-handling device if steering precision and body control are your parameters. If you can find one equipped with wheels that don’t mimic Saturn’s rings, it also rides with decent composure, too. The Z4’s fiercest rival is better than it has ever been, in short, even if Audi is mulling whether to kill it after this generation.

The second reason is that the Z4's standard Sport suspension is better tuned for effortless motorway loping and gently flowing A-roads – environments in which the car performs very well, perhaps better than any other comparable car. Get too enthusiastic on smaller roads and it needs several attempts to get its body back under control after fast compressions and crests. Curt direction changes can also set the body fall a step behind the steering, which is trait exacerbated by the fact this eletromechanical rack is lazily geared just off-centre for relaxed cruising but markedly quickens thereafter. The result is that, just when the Mazda MX-5 and 718 Boxster start to get playful, the sDrive20i begins to get a bit twitchy and feels every kilo its 1405kg kerb weight.

Back off a touch and the car reverts to its conspicuously well balanced comfort zone. It's nicely responsive to a lift off the throttle mid-corner to tighten the line, but in light of such good tyres, power oversteer is asking a bit much of this engine. The sDrive30i will be more theatrical, and unlike the sDrive20i can be had with M's active differential (both models get an open rear differential as standard) if ordered with the M Sport Plus pack.

But the fact the Z4's chassis prefers a lighter touch plays into the hands of the entry-level 2.0-litre engine. What it lacks in outright firepower, it makes up for in easygoing breadth, with only a 300rpm dint between 1450rpm and 6500rpm when neither all 236lb ft nor all 194bhp isn’t available. It can’t match the 7000rpm redline of the straight-six in the M40i and, being undersquare in its design, doesn’t spin out quite as sweetly as some other four-cylinder engines, but it is quick to respond to the throttle and decently economical. Reckon on 45mpg at a cruise and so an impressive touring range of around 500 miles.

In fact, if you've no intention of driving the socks off the Z4, its powertrain is largely beyond fault. There are various modes for the engine and transmission characteristics, but the calibration is good and rarely do you find yourself in the the wrong gear at the wrong moment. Sport Plus mode also elicits a satisfying kick to the driveline when each of the car's eight ratios slots home and the exhaust burbles on the overrun (as, alas, do the speakers behind your head).

On an international launch event, we can only drive what’s put in front of us, and in this case it happens to be a version of the Z4 that few will choose.

In fact, while the sDrive20i will be the best-seller in the Z4 range, BMW says 80% will opt for an M Sport rather than the Sport driven here. And although most will be spending the extra £1770 purely for the more aggressive aesthetic, there’s every chance that doing so – and thus having the firmer suspension – will also address the qualms we have about the handling.

Upcoming tests on British roads will confirm that or otherwise, but assuming there is an improvement, the entry-level Z4 makes a convincing case for itself, because it's more pleasing to drive at any speed than the TT and a more accomplished, quieter cruiser than the 718 Boxster.

So, in the end, the entry-level Z4 deserves its four stars, based on its prowess as an all-rounder and fundamentally enjoyable dynamics, even if there is still plenty of room for improvement. 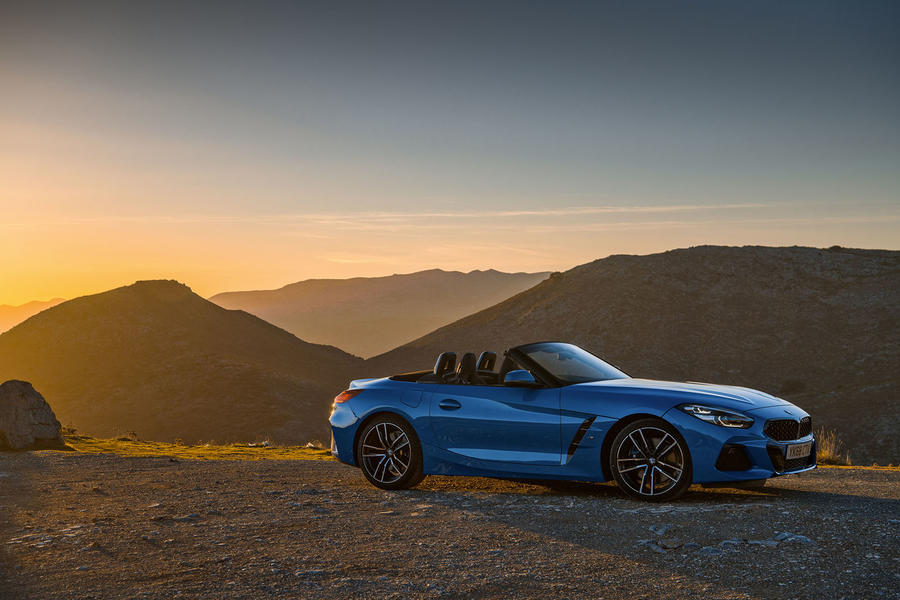 The front overhang is too

The front overhang is too large for a BMW. The front looks like a Mercedes one, except for the radiator grill.

therefore long bonnet. It’s great people, come on! SLS/amggt look great, though I prefer them in shape of coupes.

i am enjoying newly purchased E85 Z4 3.0Si with manual and sport package. Steering wheel is not heated but thick M job bike and sport seats are super as well. Used to own E86 coupe of the same exact spec, up until 3 years ago, and now back to this model. Tiny, long bonnet, stand out design, no turbos and manual, it’s a joy to drive. :-)

But they don't have a such a stupid bonnet length (it's really a design/owner statement) like this and other BMW's.

Good grief, this must be one of just a handful of cars where the front of the car can be at a different set of lights to the driver.
On the heated debate about heated things, it's 2019 people - heated steering wheels and seats, especially in a drop top like this, are fantastic. You don't have to corrupt the feel of the steering with a pair of old gardening gloves, and you can keep your arse cheeks toasty while enjoying the fresh air.
abkq 20 March 2019

Good grief, this must be one of just a handful of cars where the front of the car can be at a different set of lights to the driver. On the heated debate about heated things,

All Z3/4 have long bonnet as signature. But none as comical as Mercedes AMG GT / SLS where the front is at two sets of lights ahead of the driver.