BACK TO ALL NEWS
Currently reading: Aston Martin's Lagonda SUV concept to make production in 2022
UP NEXT
Dacia plots gradual EV roll-out to maintain affordable pricing

The Lagonda All-Terrain Concept is the second Lagonda concept car unveiled by Aston Martin as part of the marque’s relaunch as a luxury all-electric brand.

The new concept, which Autocar received exclusive access to ahead of the Geneva show, is the second Lagonda concept after the Vision Concept saloon at last year’s Geneva show. It previews a new Lagonda SUV that will go into production in St Athan, Wales, in 2022. 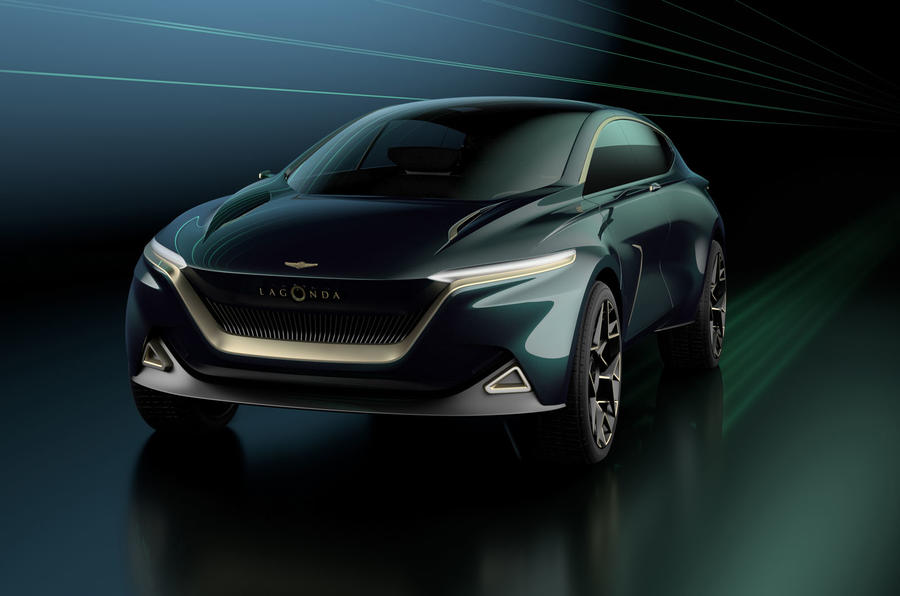 The model lines up at the Geneva show alongside two mid-engined Aston concept cars: the Vanquish Vision and AM-RB 003.

Like the Vision Concept, the All-Terrain Concept is all-electric. The two are closely related, sharing an architecture and key components as part of Aston boss Andy Palmer’s desire for the firm to have greater efficiencies between its models.

The production version of the All-Terrain Concept will line up alongside the likes of the Rolls-Royce Cullinan and Bentley Bentayga when it makes production. However, Palmer reckons the models won’t be competing for buyers due to their wildly different briefs. 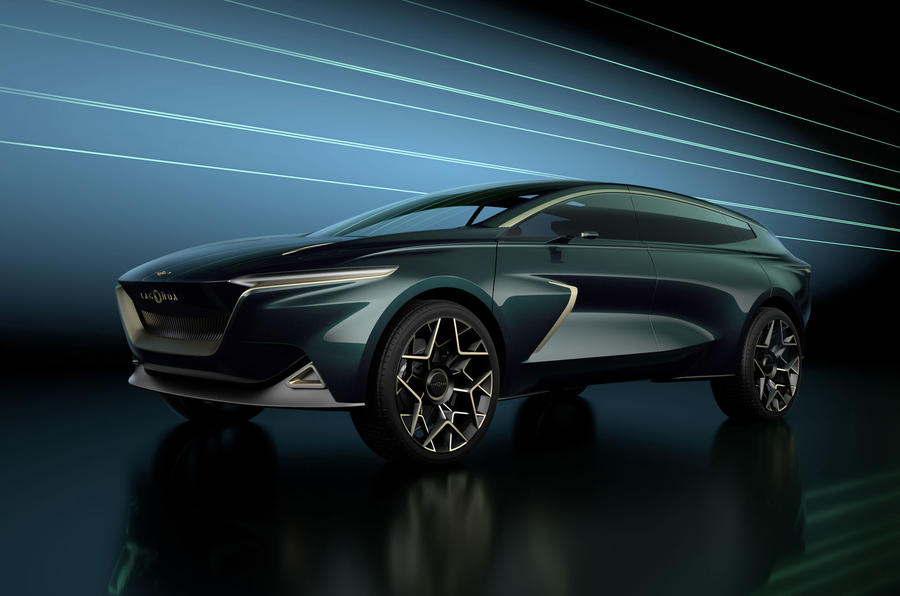 “This is a car for tech entrepreneurs, the guys who drive Teslas, not Bentleys and Rolls-Royces,” he said. “It’s in the same high-net-worth market but not aimed at the same customer.”

The All-Terrain’s styling is instantly recognisable from the Vision Concept, including the windscreen and side glass that carry over to further improve efficiencies between the two models. That sleek profile translates here onto an SUV that should have a presence like nothing else on the road, with futuristic styling that design chief Marek Reichman said “challenges but it works”. He added: “It has to be unearthly and different.”

In migrating from saloon to SUV, the Lagonda has been designed from the roof down rather than the floor up to stop the usual slab-sidedness you get from large SUVs, and to keep the body sleek but also benefit from the raised driving position and greater cabin space and height an SUV brings. The Lagonda SUV is around 200mm taller than the saloon. 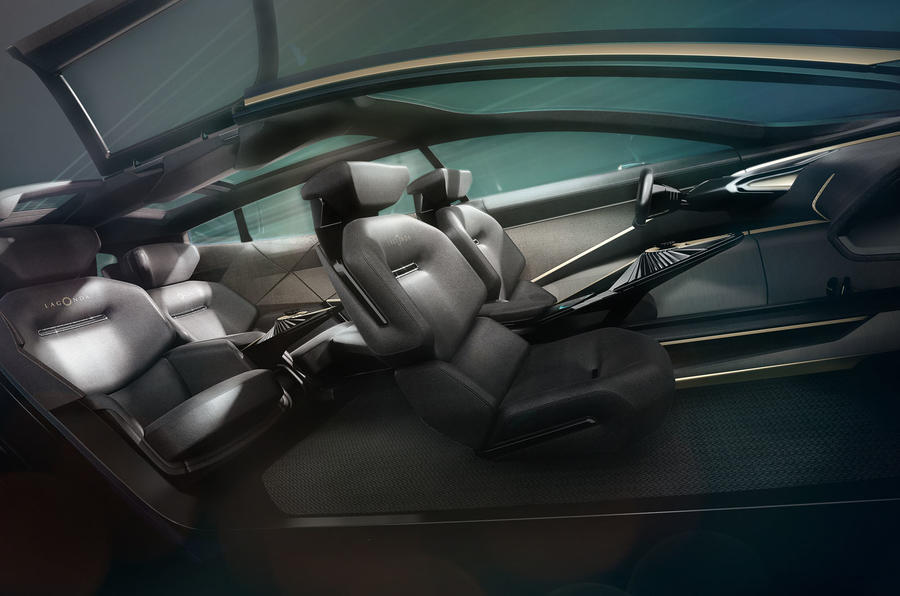 Aston believes that electric power and its packaging benefits is also ideally suited to luxury cars, as it can liberate so much space within the cabin. “No one has taken advantage of the fact that there is no internal combustion engine,” said Reichman of the electric cars so far. “There’s oodles of space in here.”

To that end, the Lagonda SUV concept has an ultra-long wheelbase with batteries mounted in the floor. This liberates a huge part of the car’s footprint for cabin space.

As with its mid-engined models at Geneva, Aston has not confirmed technical specifics of the Lagonda All-Terrain Concept. However, Autocar understands Aston is hoping for an all-electric range of around 400 miles for the production version, with a wireless rapid-charging technology fully replenishing the batteries in 15 minutes.

The model is to be all-wheel drive, with power coming from two electric motors – one on each axle. Aston hopes solid-state battery technology matures to production readiness to help with that big range figure, given that a sizeable battery pack will be needed to propel what by its very nature will be a large, heavy car. 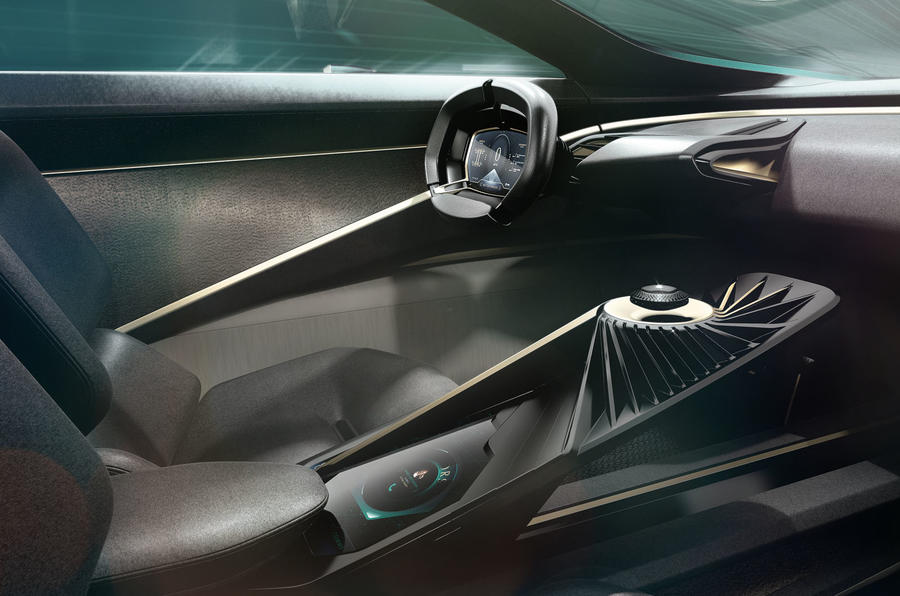 The Lagonda SUV won’t be a proper 4x4 off-roader, but instead will have what Palmer describes as “off-track potential rather than off-road”.

The vast four-seat interior is largely shared with the Lagonda saloon concept but trimmed differently with luxurious materials including cashmere and crystal rather than more traditional materials to show the different ambience that can be created. The SUV also shares the dramatic rear-hinged rear door openings with the saloon to help access to the interior.

The two Lagonda concepts also share their suspension systems with the upcoming DBX SUV, which will also be built at St Athan from early next year as Aston’s first SUV.

To that end, Palmer describes Aston as ultimately making “seven models from three Meccano sets”. That means close relationships between the front-engined DB11, Vantage and DBS Superleggera, the DBX, Lagonda SUV and Lagonda saloon, and then the Vanquish and any other mid-engined specials Aston makes on top of its core range of seven models.

My son saw this and said "it looks like it had a poo in its pants..."  I kind of get where he's coming from.  Needs a new nappy?

This vehicle is ugly as sin!

Here's hoping they're able to inject some elegance into the real design, rather than trying to be "edgy" and creating something ugly.

What happened to Aston products with timeless beauty?

and the front three quarters view, but the rear overhang is weird. And the interior is 'concept car' stuff that has little relevance to the real world.