Audi Sport is working its magic on the recently revealed Audi Q3 Sportback - and the hot coupé-SUV will make its public debut at next month's Frankfurt motor show.

The RS version of Audi's seventh SUV will join its less style-focused Audi RS Q3 sibling at the event. Since the standard Sportback has already been revealed, the performance model has lost camouflage and can be clearly marked out as an RS model.

It's identifiable by its dual oval sports exhaust tips, Audi Sport logos on the brakes, and the air intake, grille and wheel styling. The RS Q3 Sportback is expected to use an all-new 2.5-litre five-cylinder petrol engine that produces up to 400bhp. 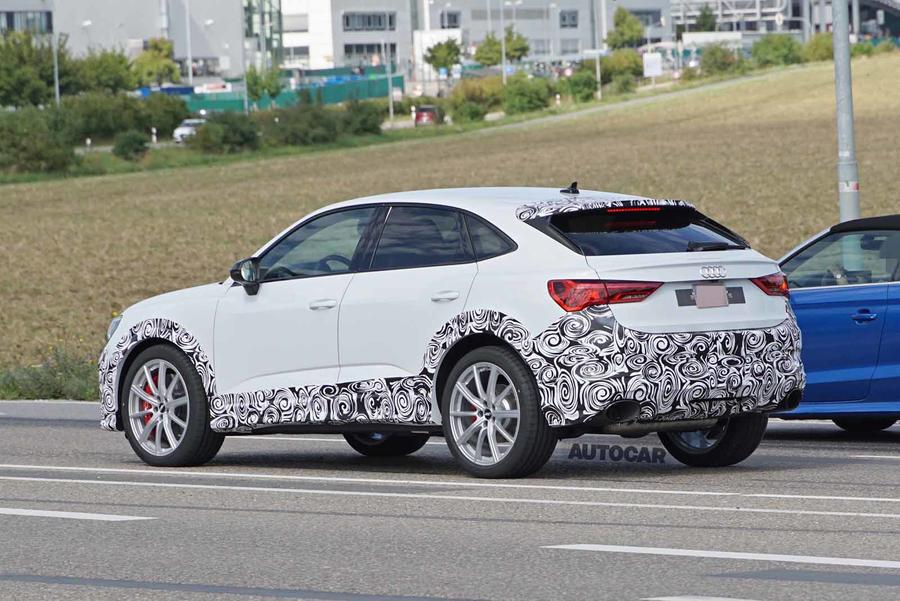 Such an output would give it the muscle to challenge the upcoming second-generation Mercedes-AMG GLA 45, which uses a smaller 2.0-litre four-cylinder engine but puts out 416bhp in top-spec S form. The Audi will likely counter this with more torque and many enthusiasts will welcome the retention of the distinctive five-cylinder layout.

Expect a 0-62mph time of around four seconds and a 155mph governed top speed. As is traditional with RS products, we'll also see bespoke interior fixtures alongside mechanical upgrades such as a bespoke suspension set-up and the option of a sports differential.

The RS Q3 Sportback will be produced in 2019 at Audi's plant in Győr, Hungary alongside the regular car. It is part of a growing line-up of style-led SUVs, spearheaded by the electric E-tron and range-topping Q8.

Spoilt for choice...and they are all so similar

Just like most Cars can’t keep up with a Hayabusa bike, these Cars are irrelevant, what’s the point of trying to keep up in your home made special?, Cars with this performance a nice to watch zoom past at warp factor nine or maybe a Bentley just idly cruising in the outside lane doing an easy ton, all great, but irrelevant....

Given the new 500hp X3/X4 offerings from BMW and the Merc GLC 63+, isnt this a tad underpowered in the current SUV hp arms race?

The Q4 will compete with...

...the X2 and GLA, the X3/4 and GLC are the equivalent of the Q5. There's no firm word on a RS Q5, I don't think it would be a surprise if it does appear though. So, the Q4 will compete directly against a GLA45 which must surely be inbound. There's no performance X2 variant as yet.

Given the new 500hp X3/X4 offerings from BMW and the Merc GLC 63+, isnt this a tad underpowered in the current SUV hp arms race?