The Volkswagen Group’s hottest hatchback, freshly through its bottleneck of WLTP emissions compliance testing that was so backed up it put the London-bound end of the M4 to shame.

Yes, like its engine-sharing two-door relation, the TT RS, the Audi RS3 had to be taken off sale for about a year while rehomologation took place. In order for both to get through the tougher regulations, a particulate filter was installed, but thankfully no further neutering was needed for both cars’ party-piece powertrain.

The headline figures for the turbocharged five-cylinder unit remain the same as before, meaning its 395bhp will be beaten in this class by only the upcoming new Mercedes-AMG A45. The price tag befits this crowning status: the RS3 is now priced from a smidgen over £47,000.

But ultimate bragging rights are afforded to those willing to break the £50,000 mark. The new Sport Edition variant asks another £4000 for the chrome detailing swapped out for black, a new alloy wheel design, sportier seats and - perhaps most importantly - the louder RS Sport exhaust system. 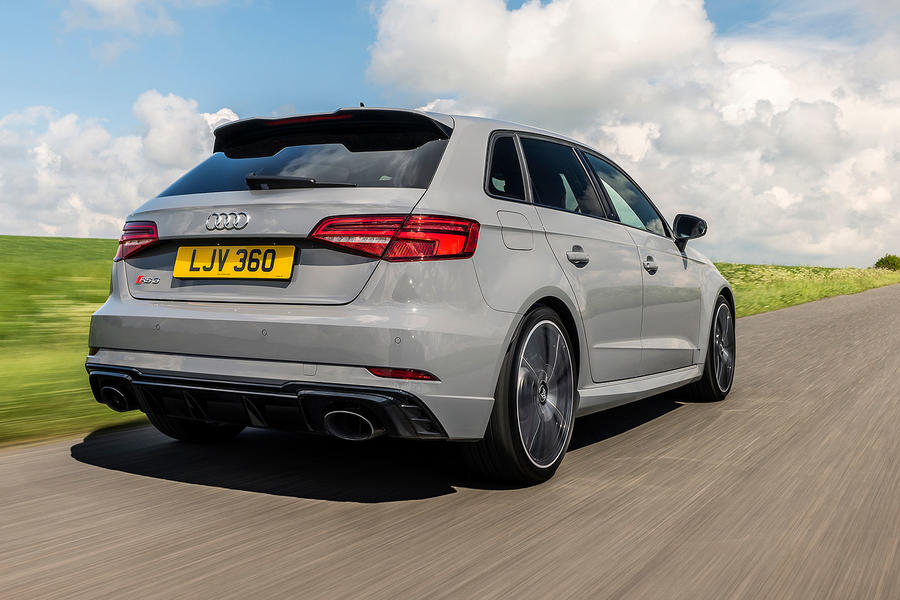 The RS3 is largely as we remember it. And in a category upon which the continuing march of emissions, noise and safety regulations have already had a profound effect, that’s not something to be sniffed at.

The RS3 returns, conveniently, at the same time as BMW’s M140i hot hatch bows out with a replacement on the way - trading that delightful turbocharged straight six for a smaller, less powerful four-pot. So it now has the largest-capacity engine in the class, and that's something we’re not expecting any forthcoming models to usurp for the foreseeable future.

Having such a USP is essential for a car like the RS3. Without it, not only would it be accused of lacking character, but it would also leave us wondering why you wouldn’t make do with a Volkswagen Golf R and £12,000 in change. With it, it’s a dominating part of the driving experience - in a magnificent way.

The noise the engine makes simply cannot be replicated by any of today’s artificial sound generators. Ranging from a guttural, unbalanced burble to a warbling crescendo, it’s a truly distinctive soundtrack. Get your cliché warning bell ringing: on the rural Scottish test route, it really did conjure up the feeling of joining Messrs Röhrl, Mikkola and Blomqvist with their Quattro A1 at WRC 1984.

The sports exhausts adds to the aural drama, although there are fewer of the characteristic pops and bangs than we remember; Audi claims this is a direct result of incoming stricter EU-wide car noise regulations. Regardless, it’s far more emotive than the often artificially enhanced turbocharged fours of most rivals.

The engine remains just as eye-popping in terms of its relentless accelerative ability. Whatever the revs, the response is seamless: once past a hint of lag, the combination of a near-instant 354lb ft of torque with a snappily shifting dual-clutch automatic gearbox means the RS3 just picks up and fires itself down the road in a manner that leaves your brain struggling to comprehend that you’re in a five-door hatchback. The only thing missing, perhaps, is a greater build-up of power in the upper echelons of the rev range, down to the motor’s flat torque curve.

Just as remarkable is its ability to settle down and play the smooth operator when called upon. Pull it out of the racier driving modes and it becomes docile, even refined, with a smooth low-rev delivery and well thought-out gear ratios. The RS3 also has a less busy and stiff ride than the TT RS, albeit one that’s still firmer than the S3's or a Golf R's, even with adaptive dampers in play.

Dynamically, the RS3 still plays up to the age-old fast Audi tropes of being hugely grippy, predictable and safe. But there’s less understeer than you would have found in an RS of yesteryear; the engine is lighter and the four-wheel drive system is clever, even allowing the faintest element of mid-corner adjustability these days. Yes, the BMW M2 Competition is distinctly more engaging on the road or on a track, but it can’t match the RS3’s crushing all-weather ability. 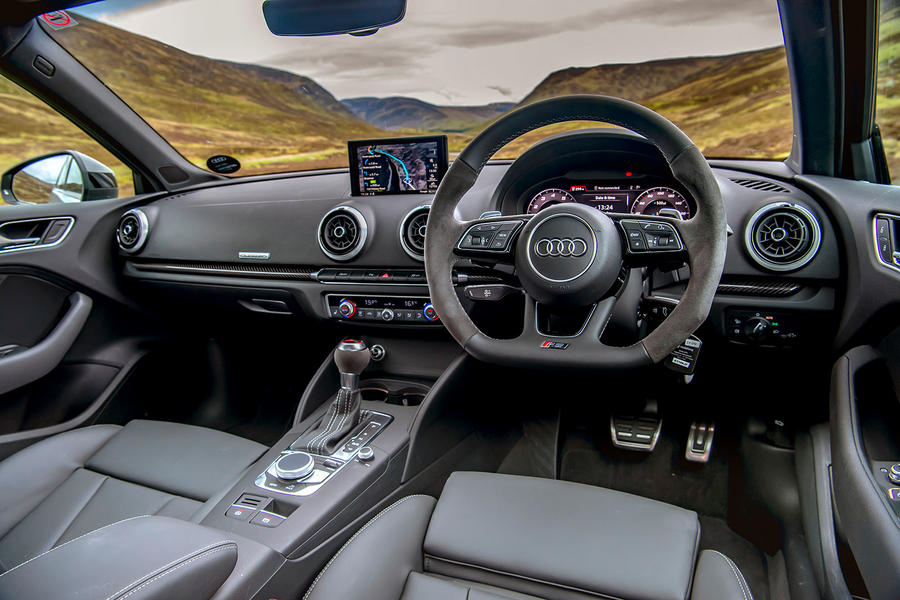 The purchasing decision here depends on whether or not you can stomach paying more than £50,000 for a hatchback. At least a saloon is also available for those that can’t.

That the RS3’s performance and engine character is impressive should be in no doubt. We’re also absolutely certain that, on the right road and in the right conditions, the term “supercar-baiting” is entirely appropriate. But it’s also compelling as an everyday driver, retaining enough of the standard A3’s refinement and comfort to not be a chore to commute in.

But the fact remains that a £9000-cheaper S3, or for that matter a £12,000-cheaper Golf R, offers 90% of the performance, stability and entertainment, is similarly unfazed by poor weather, just as practical and, so long as you spec adaptive dampers, even more comfortable when required. All three are also advancing in years, due to be replaced soon by fresher equivalents.

With that kind of rationality that usually factors in a new car buying decision, the RS3 is perhaps a bit difficult to justify. But for those who can appreciate the uniqueness and allure of what’s under the bonnet, it might just be a price worth paying in times where such motors are becoming harder to come by. 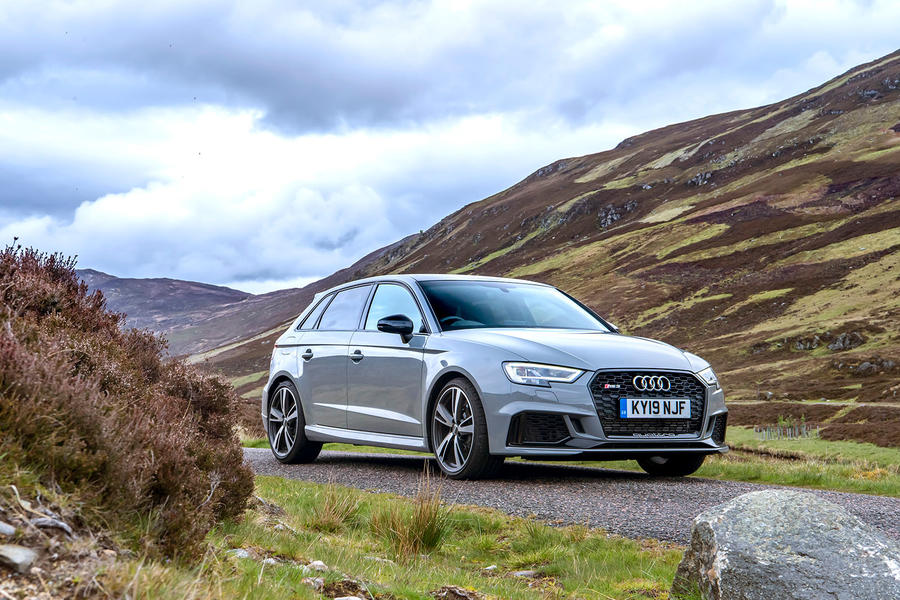 insane 2.5 5 cylinder oooooohhhhhhhhhhhh what a beauty that thing sounds insane!!!!!! and in nardo grey it looks insane.

Fewer pops and bangs are good

> there are fewer of the characteristic pops and bangs than we remember; Audi claims this is a direct result of incoming stricter EU-wide car noise regulations

I see this as a good thing, I find the noises juvenile and they don't contribute to performance at all. Cars that do this now will become very dated as a 2010s-era fad.

Gone in less than 40 seconds

Could be worse, BMW and Mercedes are high up in the most stolen list  with the X5 tops, more specifically the M3 used to come in at 2nd or 3rd.